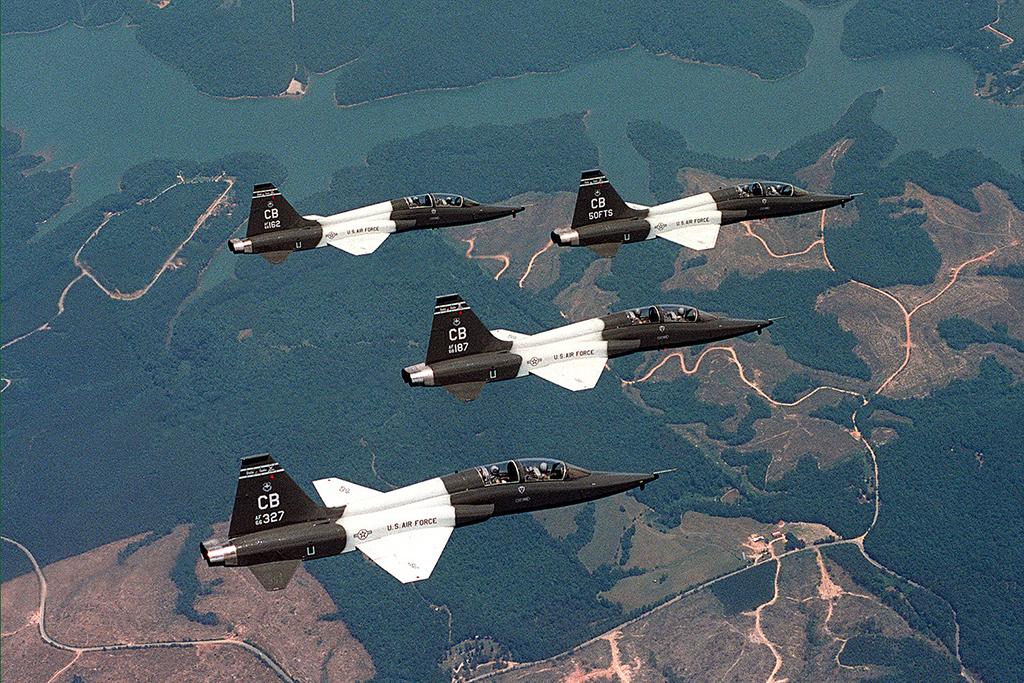 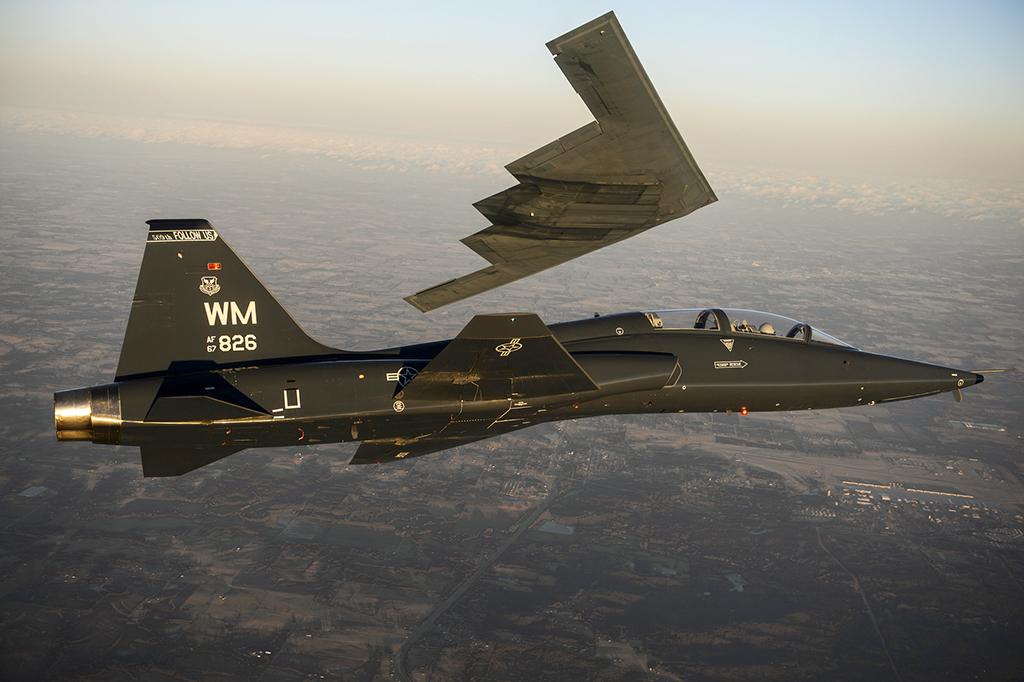 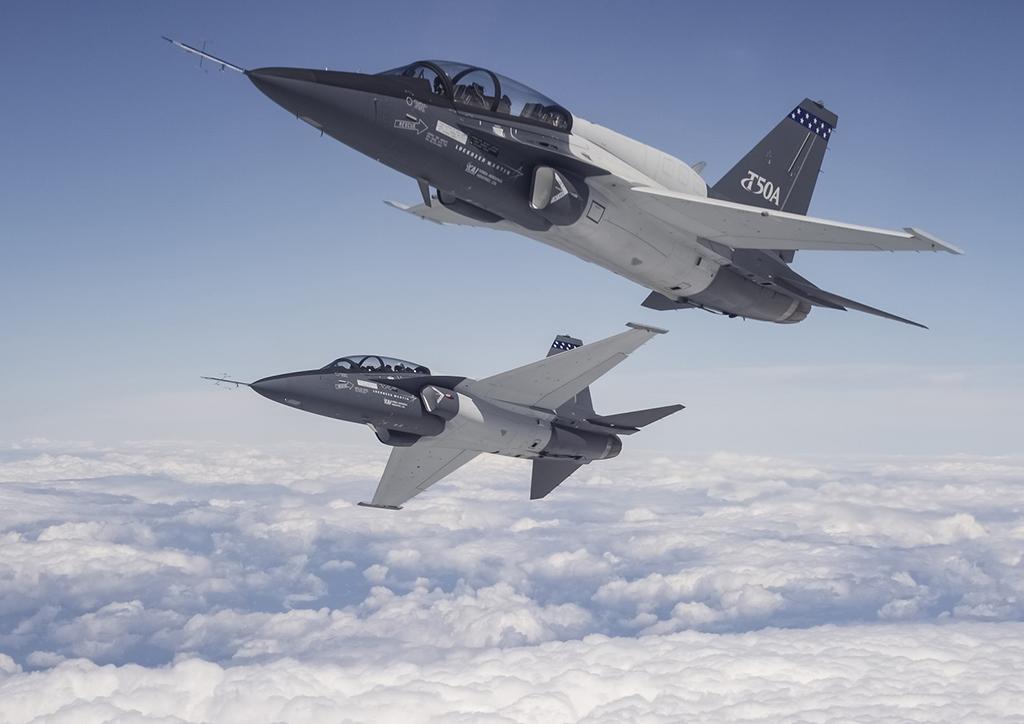 Lockheed is offering a block upgrade of a ready-made, proven design from the late 1990s that first flew in 2002, the KAI T-50 Golden Eagle. The single-engine, single-vertical-tail aircraft, powered by the General Electric F404, was chosen over a clean-sheet design being prepared internally by Skunk Works. Lockheed Martin is playing to win, having already converted two T-50s to the A-model standard with wide-area displays and refueling receptacles, among other changes.

One aircraft is already flying in Greenville, South Carolina, where the company intends to complete final assembly and checkout. The second T-50A remains with Korea Aerospace Industries (KAI) in Sacheon, South Korea, will soon arrive in the U.S. Lockheed will bring all of its F-35 and F-22 experience to bear converting this F-16-like aircraft into a modern trainer to meet the Air Force’s T-X requirement, and a FA-50 light attack version is also being explored. 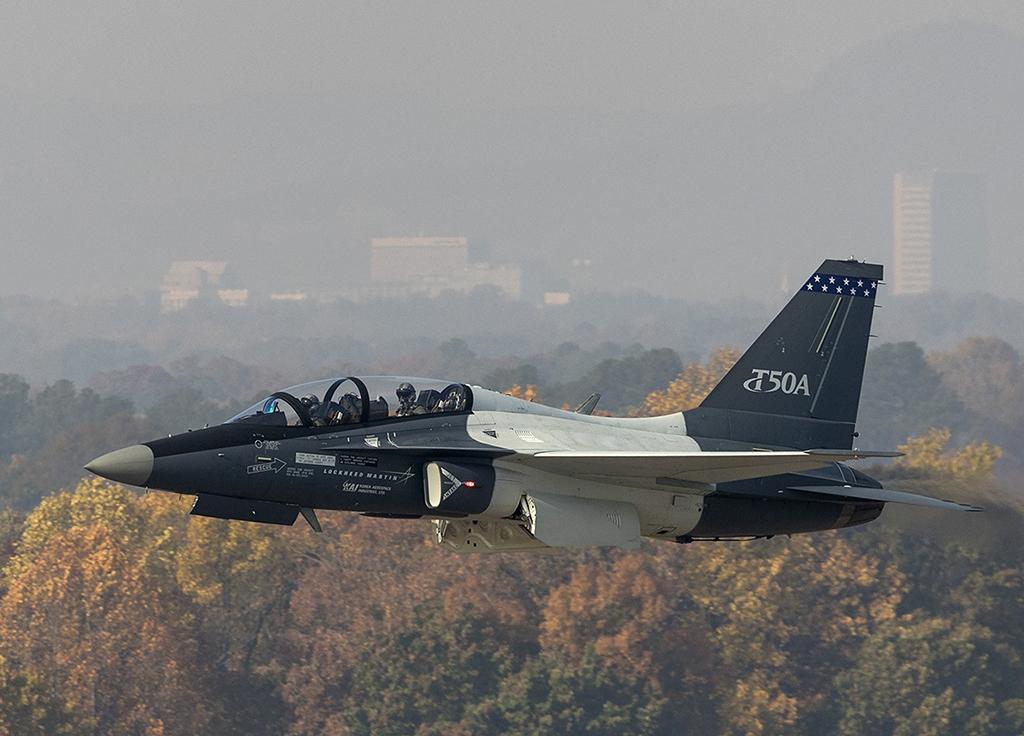 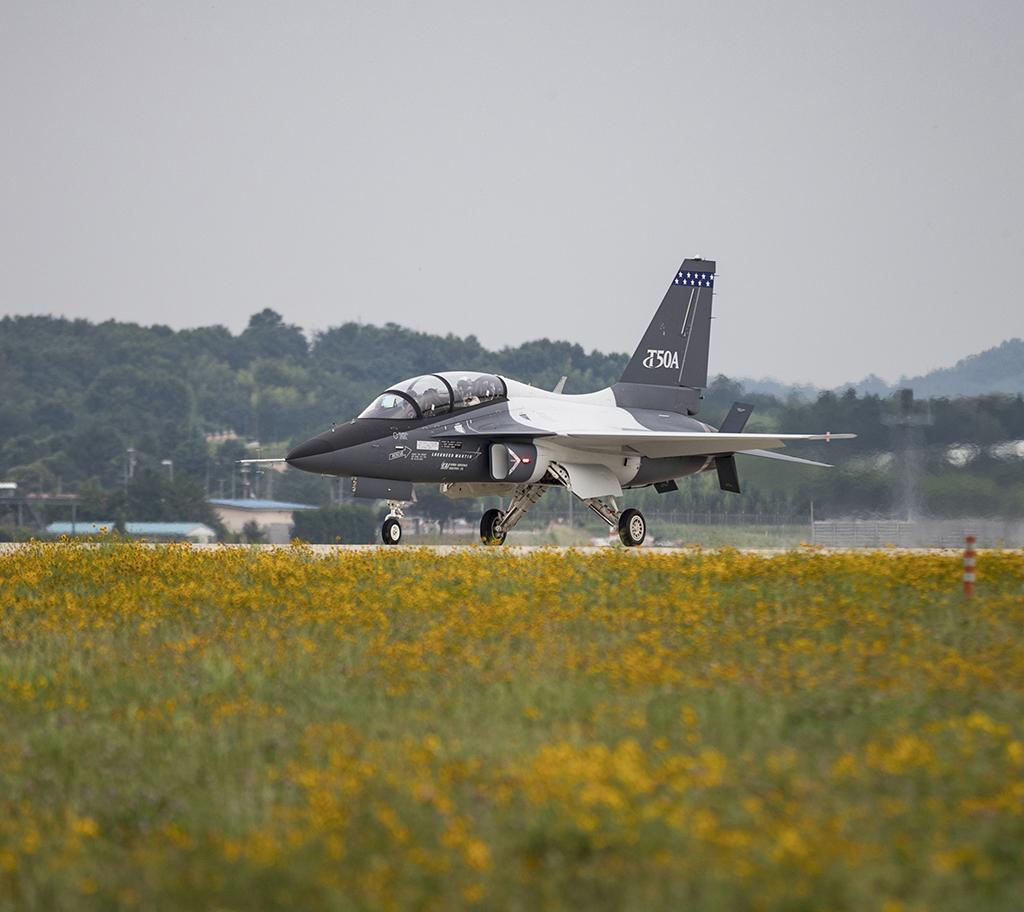 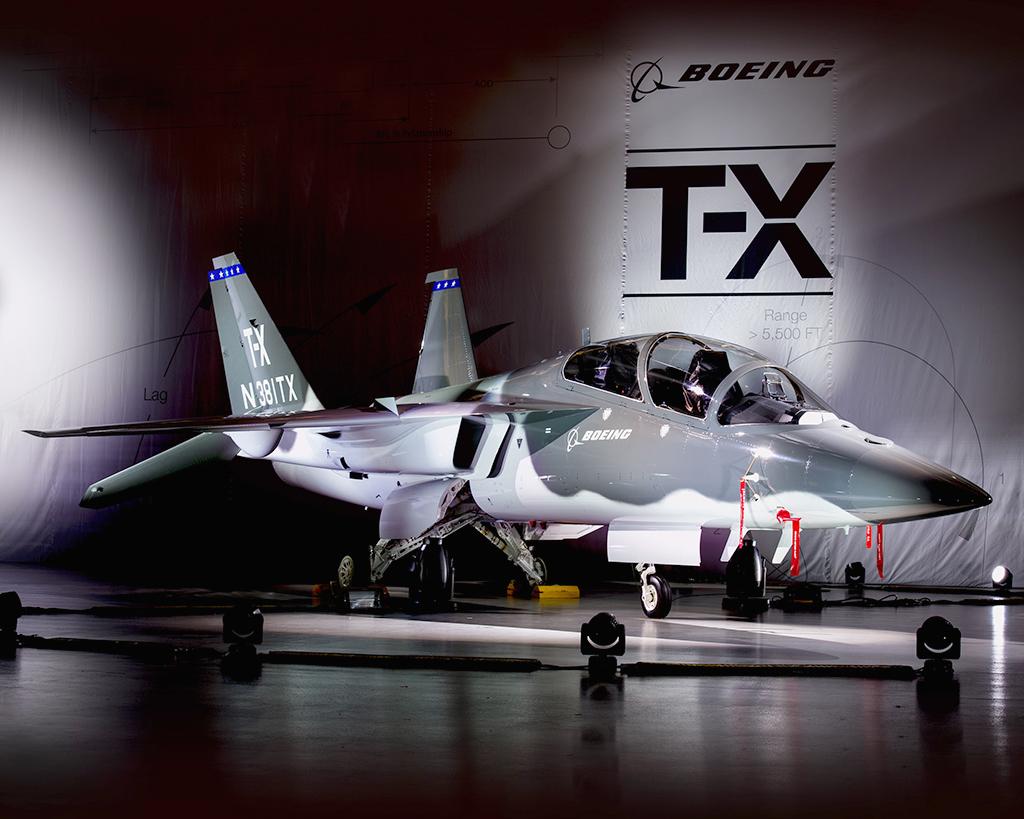 Boeing was the first to go all-in on a clean-sheet design for the T-X, partnering with Saab for what is called BTX, or Boeing T-X. Two “production-ready” aircraft were rapidly developed and have completed assembly in St. Louis, where Boeing builds the F/A-18 and F-15. The team unveiled their single-engine, twin-vertical-tail aircraft in September and achieved first flight on Dec. 20. Boeing says the aircraft and its associated ground-based training system were designed “from the ground up” to meet the Air Force’s T-X performance and technical requirements.

Boeing has not yet picked where it will complete assembly, if successful. As a completely new aircraft requiring flight testing and certification, the BTX will probably take longer to introduce than Lockheed’s T-50, but there are no bonuses for beating the late-2024 fielding requirement. Boeing previously delivered the Hawk-based T-45 Goshawk to the Navy for carrier deck F/A-18 pilot training. The Navy will begin looking for a T-45C replacement by 2020 for fielding around 2025. 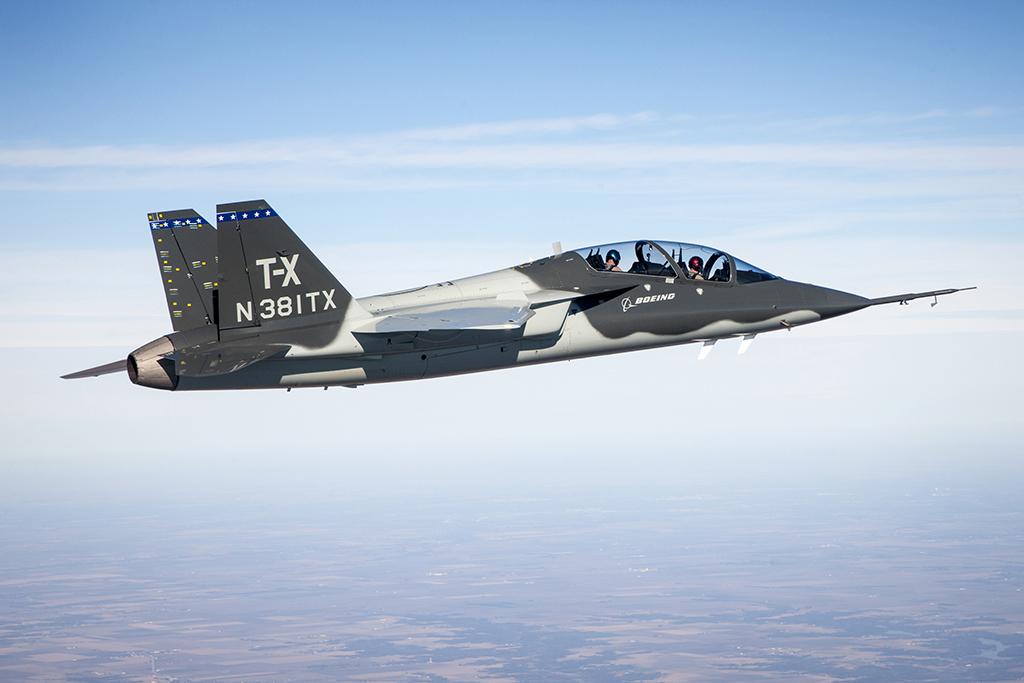 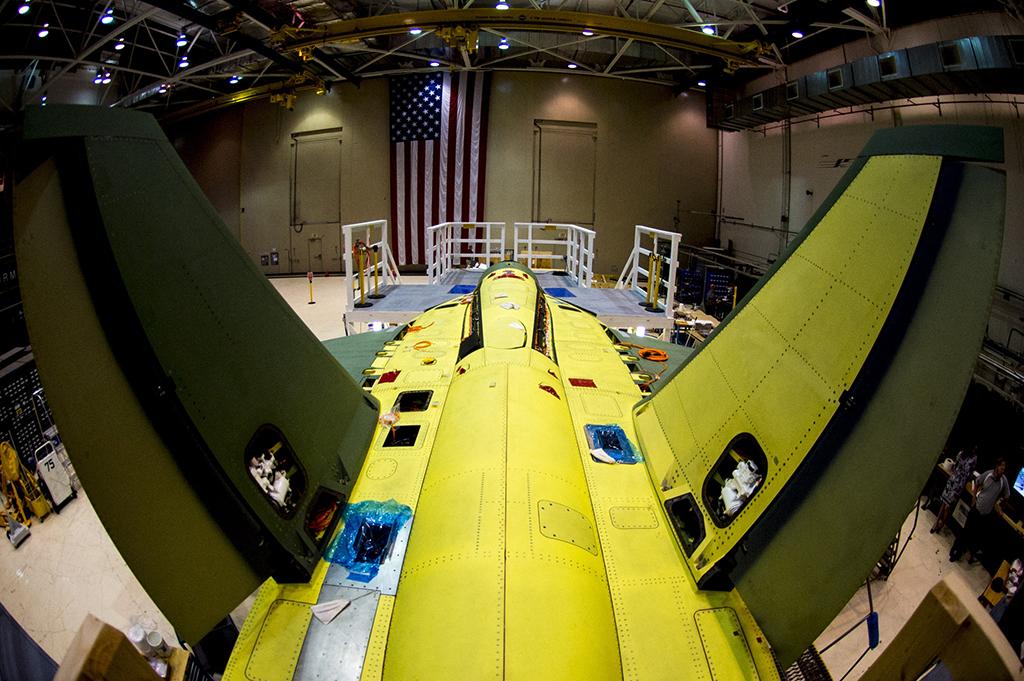 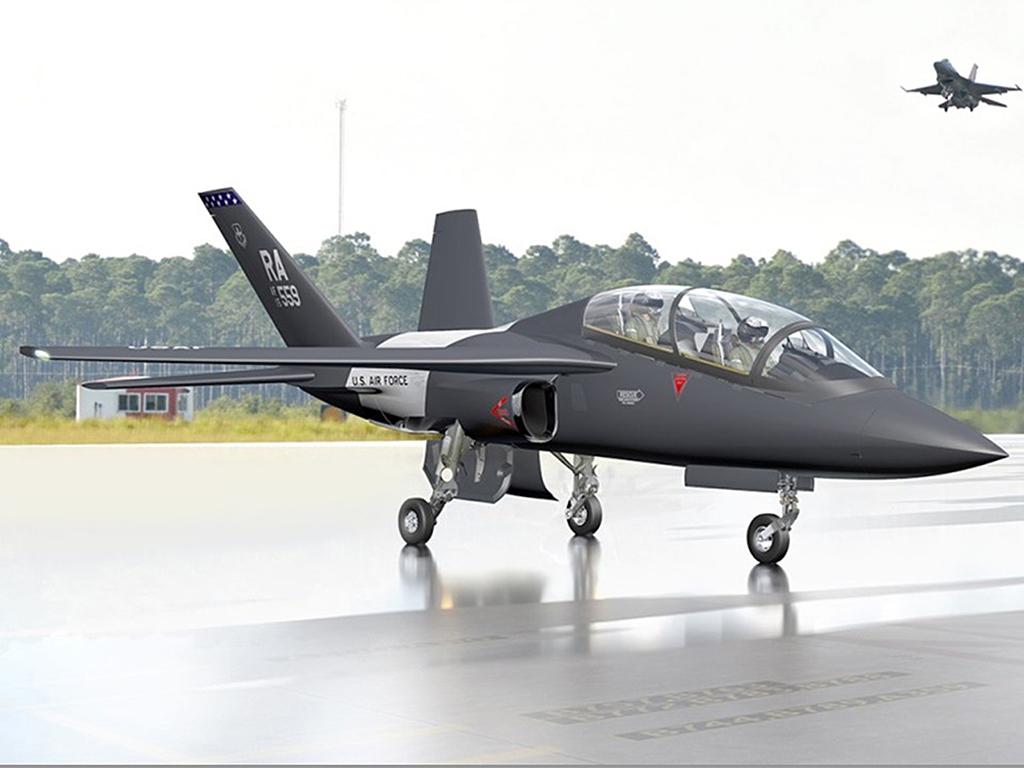 Sierra Nevada Corp.’s surprise play for the T-X could significantly shake up the competition if it decides to enter its lightweight, all-composite “Freedom Trainer.” The company has partnered with Turkish Aerospace Industries (TAI) under Freedom Aircraft Ventures to develop a flying prototype powered by two Williams International FJ44-4Ms. The aircraft is being constructed at Sierra Nevada’s aircraft depot in Centennial, Colorado, and was designed to meet the T-X performance specifications, but also with consideration for the larger global combat pilot training market, which it estimates to be 1,200 aircraft.

The company sees aircraft manufacturing as a potential growth engine, but it has no track record of developing and fielding entirely new aircraft, unlike rivals Boeing, Northrop, Lockheed and Raytheon. It has, however, successfully partnered with Embraer to produce the A-29 Super Tucano in Jacksonville, Florida, and is a leader in special-mission aircraft modifications for law enforcement and military operators. Despite being more than one month into the submissions period for T-X, SNC is refusing to say if it is in or out of the competition. The company revealed its Freedom Trainer to Aviation Week in December, but has not provided any more details. 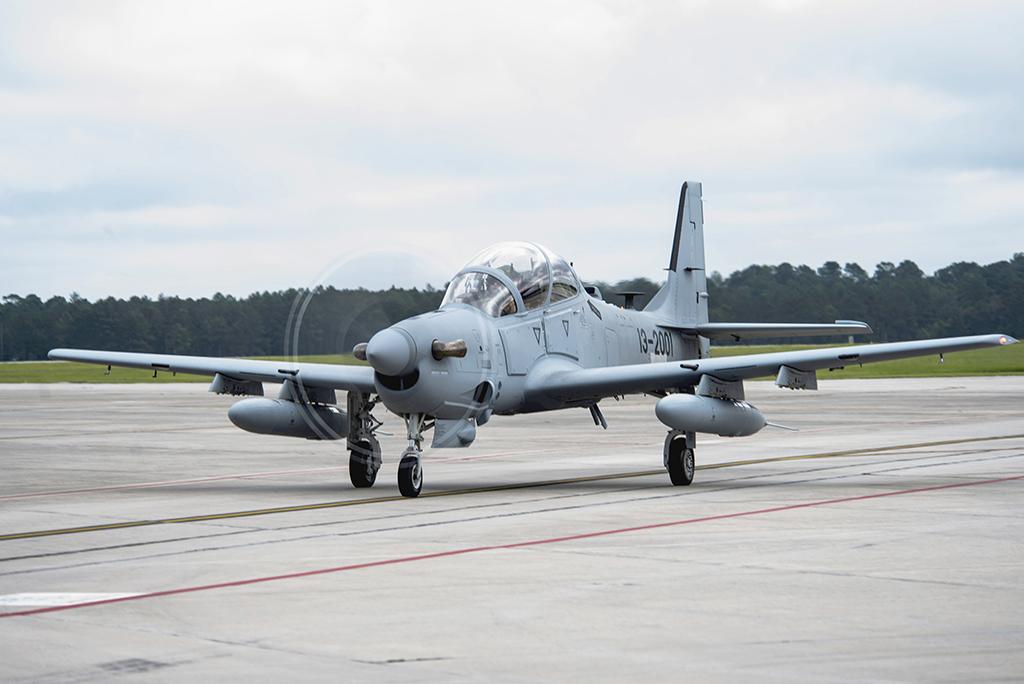 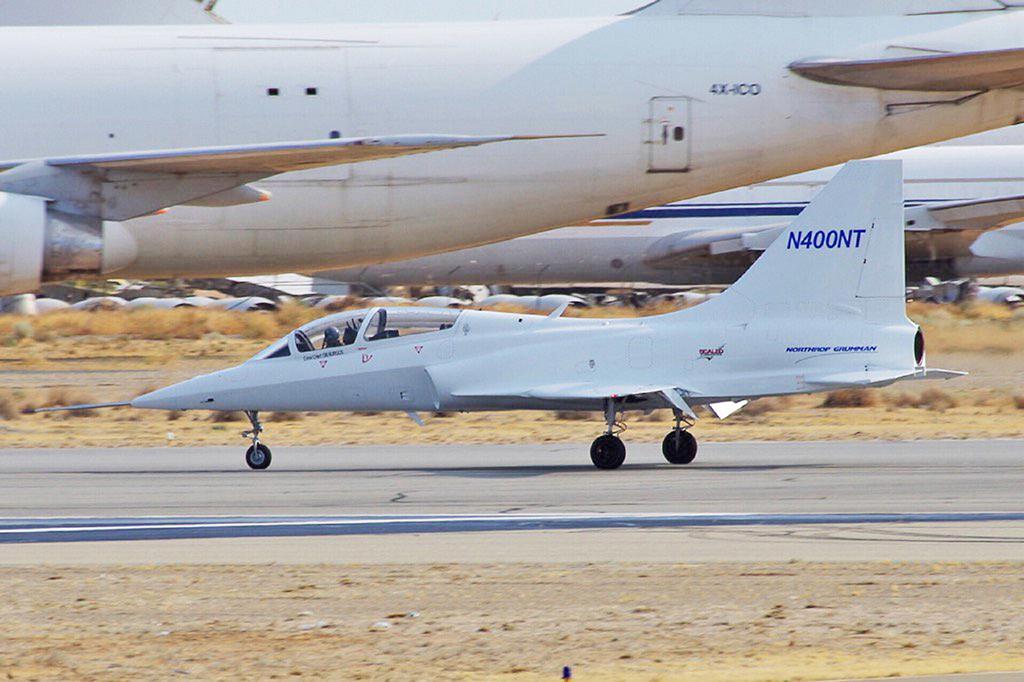 Northrop Grumman’s long and eventual pursuit of the T-X program came to an end on Feb. 1. Northrop and its British teammate BAE Systems decided not to compete for the T-X because they did not want to get into a price shoot-out for a low-cost, high-volume aircraft contract. Northrop built thousands of T-38s and F-5s for the U.S. government in its heyday, but missed out on bringing the F-20 Tigershark into production in the 1980s. Under CEO Wes Bush, Northrop has shifted its focus to being a leader in “value-added” high-performance aircraft, building center fuselages for the Lockheed Martin F-35, as well as the B-21 Bomber, E-2D Advanced Hawkeye, RQ-4 Global Hawk and MQ-4C Triton.

Bush walked away from the KC-X program in 2010 to avoid an aggressive price war with Boeing, a wise move in hindsight, but he bet the bank in 2015 to win the Long-Range Strike Bomber over Boeing/Lockheed Martin. Northrop has been chasing the T-X since joining forces with BAE Systems in 2011, originally offering a modified Hawk before switching to the clean-sheet Model 400 built by Scaled Composites. The lightweight, composite aircraft powered by a single GE F404-102D showed up in Mojave, California, in late 2016 during taxi trials, and it later flew. No details have been provided about the aircraft. 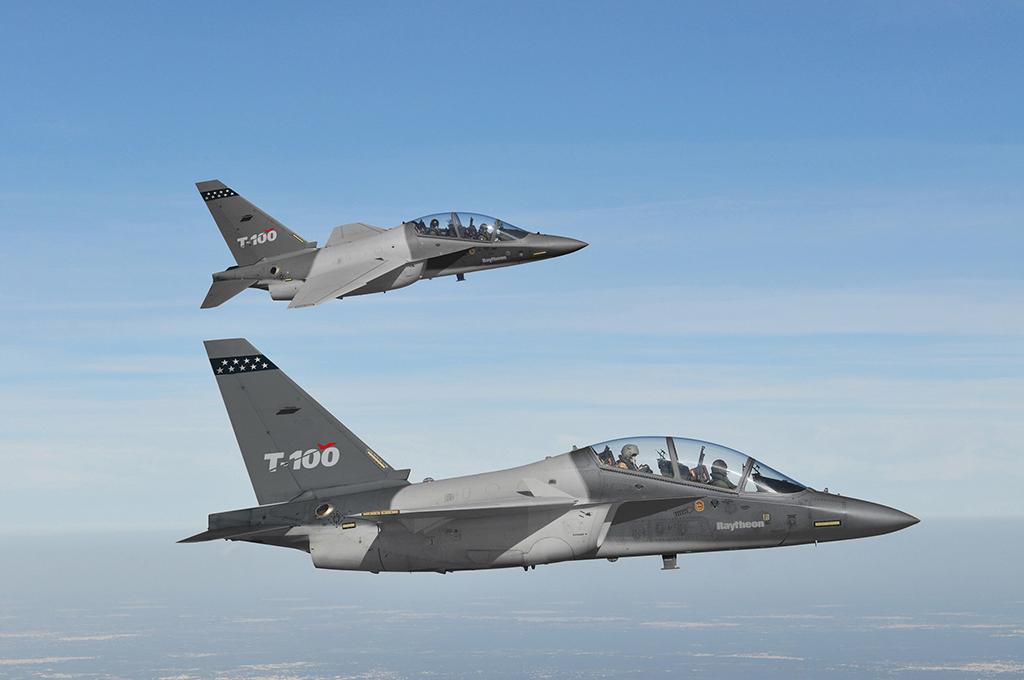 Raytheon and Leonardo’s M-346-based T-100 was already said to be on the margin of meeting the Air Force’s high T-X performance specifications, but the decision for the team to break up came down to unit cost. Raytheon did not believe it had a shot at winning the T-X with the price being offered by Leonardo. The Italian company seemed unwilling to fully relinquish control of its highly successful M-346 product and cave to price pressure. Leonardo has not totally ruled itself out of the competition, though.

“Raytheon and Leonardo will not jointly pursue T-X,” Leonardo said on Jan. 25. “Leonardo is evaluating how to leverage on the strong capabilities and potential of the T-100, in the best interest of the U.S. Air Force.” But without a strong teammate, Leonardo may find it difficult to set up shop in the U.S. Raytheon had picked Meridian, Mississippi, as the location for final assembly and checkout, a site that comes with the Key Brothers’ heritage of aviation innovation and strong political backing. Leonardo was previously teamed with General Dynamics for the T-X, but the team split in 2015 after the initial batch of requirements were proposed. It would be a lonely and expensive fight without Raytheon. Powered by twin Honeywell F124 engines, the M-346 has been purchased by Italy, Israel, Singapore and Poland. 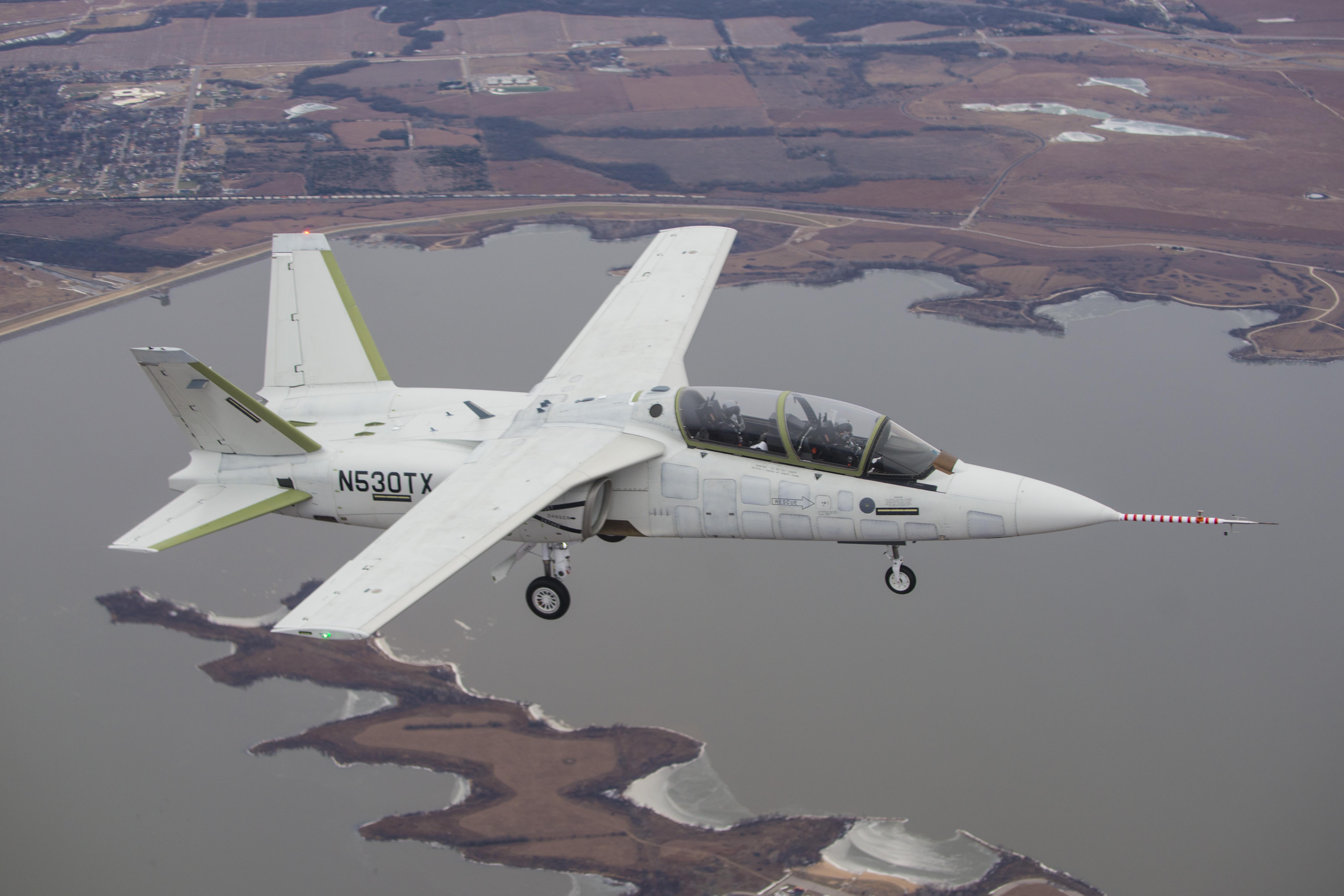 In this final hour, just two weeks out from the RFP deadline, Textron Aviation is still refusing to say if it will compete for the T-X program or sit the competition out. The company had originally proposed a training version of the Textron AirLand Scorpion light attack and surveillance aircraft that it designed and built on its own dime.

However, the performance specifications T-X, which demand high-g maneuverability, doused those ambitions. A spokeswoman for the company says the team continues to review the RFP and has not made a final decision whether to bid.

The requirements have not changed much since the draft specifications were released on March 20, 2015, and it is doubtful that Textron would let this opportunity pass without serious consideration, given its trainer legacy. The firm could be harboring a significantly redesigned Scorpion, but whether it has enough internal capital left to build a third flying prototype remains to be seen. The company has already built one Scorpion prototype and one production-conforming example without any firm orders.

The focus on high-performance at the lowest cost coupled with Northrop's exit and potential entries by Sierra Nevada Corp. and Stavatti Aerospace could be influencing Textron’s calculus about whether to compete. 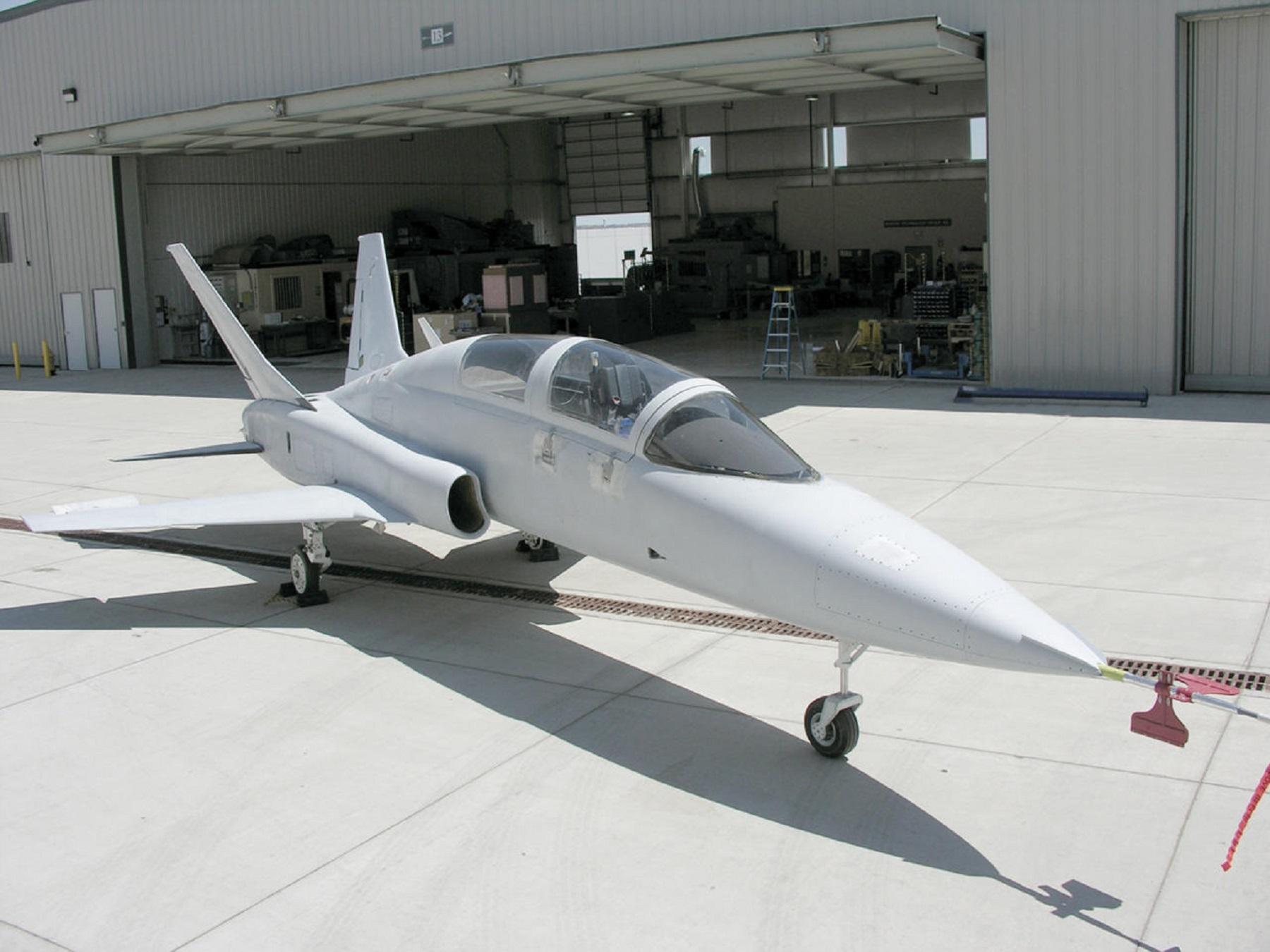 Stavatti Aerospace of Eagan, Minnesota, is making a surprise play for T-X after acquiring the property rights to the defunct Aviation Technology Group Javelin. It was developed from 1998-2007, initially as a high-performance sportplane and then military trainer under a partnership with Israel Aircraft Industries.

Stavatti CEO and founder Chris Beskar announced the firm’s intention to enter the $16 billion T-X competition on Feb. 1., and says the company is open to partnerships with major original equipment manufacturers for the production and support of the aircraft and teaming with major training and simulation suppliers for the associated ground-based training system.

The Air Force will likely approach this Javelin bid cautiously, since Stavatti has few, if any, projects of significance to point to, except a sizable library of conceptual aircraft and missiles that never left the drawing board. The lone Javelin prototype first flew on Sept. 30, 2005, and is now disassembled. Beskar is offering a redesigned version that overcomes earlier performance issues. He pegged the unit price at about $10 million apiece. “The airplane flew, but currently the airplane is disassembled,” Beskar says. “It was being updated when Javelin went bankrupt in 2008. Instead of putting it together, we’re retooling and developing a prototype based on that aircraft.”

The Northrop T-38 Talon’s longevity is a testament to late-1950s engineering and the U.S. Air Force’s aircraft depots, but after 56 years of active service, it is time to move on. The service needs a modern trainer to prepare pilots to fly digital-age fighters and bombers, and after seven years of preparation, it is time for the T-X program to deliver. On Dec. 30, a request for proposals seeking a 350-aircraft training enterprise was released, but what looked like a crowded playing field is now quickly evaporating. The focus on high performance at the lowest cost has seen the five or six potential competitors whittled down to two confirmed bidders and two wild cards. So, who has the inside track for this $16.3 billion opportunity?