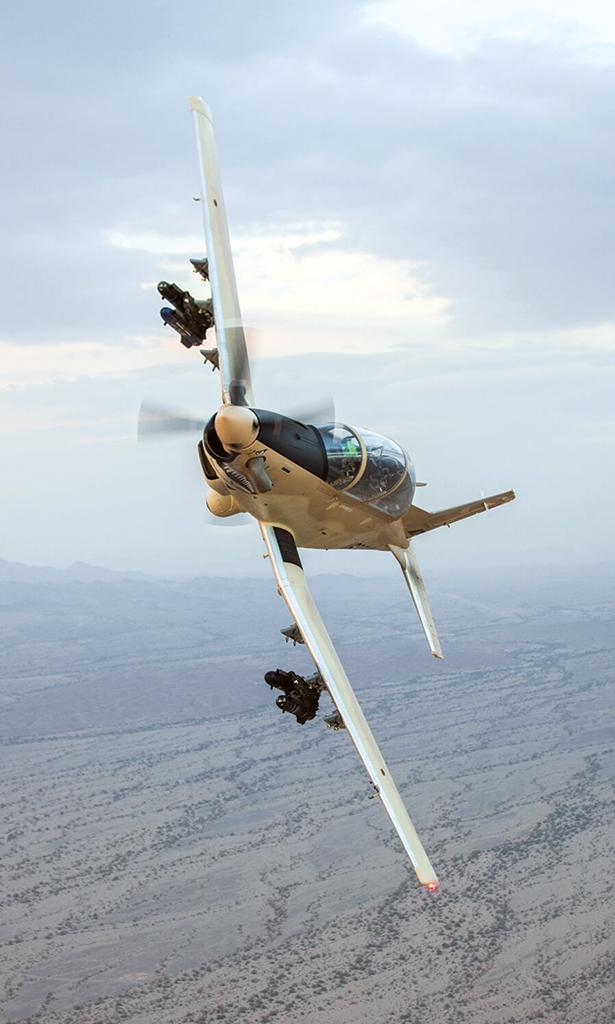 Still looking for a customer, Textron’s AT-6 Wolverine is an armed-ISR derivative of Beechcraft’s otherwise successful T-6 Texan II turboprop trainer, some 80 armed versions of which were supplied to Greece and Mexico. The aircraft has an uprated PT6A turboprop and Lockheed Martin’s mission computer from the A-10C, and it can carry an L3 Wescam MX-15HD EO/IR sensor on the fuselage centerline. 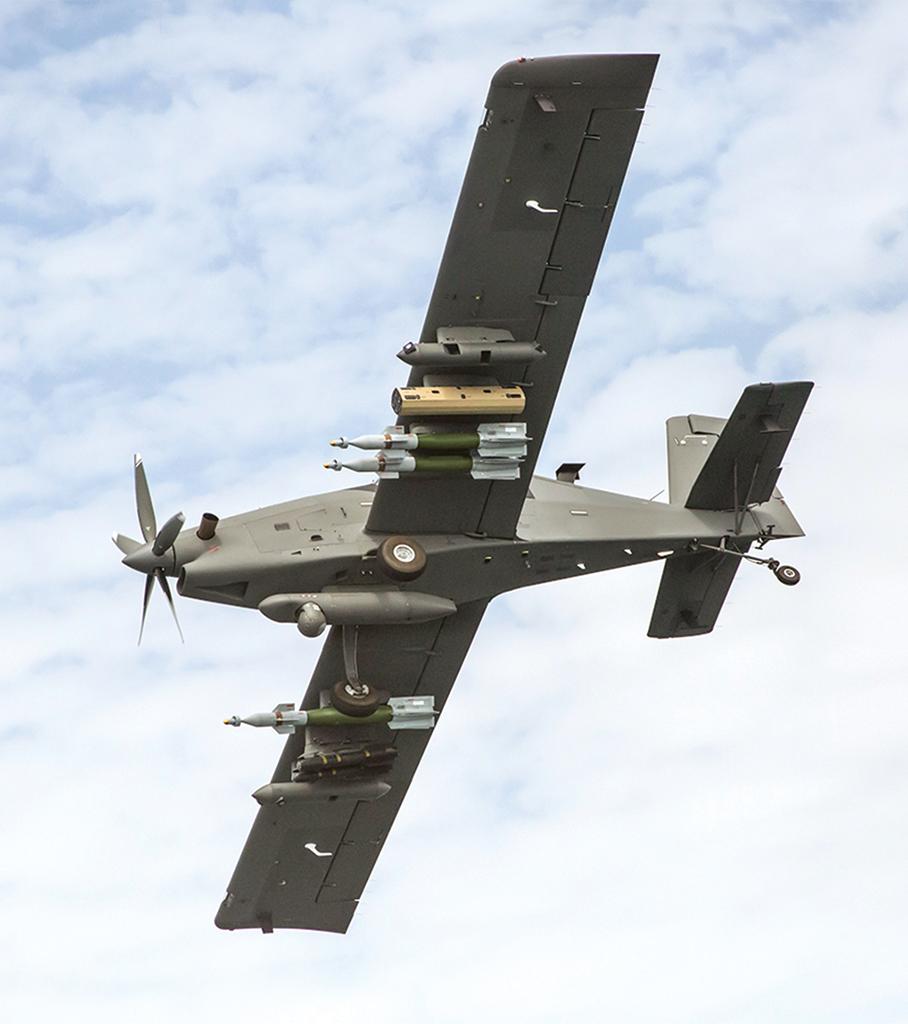 Iomax USA has unveiled the Block 2 version of its Archangel light-attack/ISR aircraft, equipped with a centerline L3 Wescam MX-25 EO/IR sensor in place of the Block 1’s smaller, podded MX-15. Archangel is based on the Thrush S2R-600 agricultural aircraft. The Block 2 is in production for the United Arab Emirates (UAE), and Egypt has requested 12 aircraft via the U.S. Foreign Military Sales program.

​UAE-based construction company Calidus commissioned Brazil’s Novaer to develop the B-250 all-composite light-attack/trainer aircraft for manufacture in Abu Dhabi. The prototype flew in Brazil in July 2017. The B-250 was designed by Joseph Kovacs, who also designed the Embraer Tucano. The B-250 is slightly larger than the Super Tucano. The aircraft has an EO/IR sensor and Rockwell Collins Pro Line
Fusion glass cockpit. 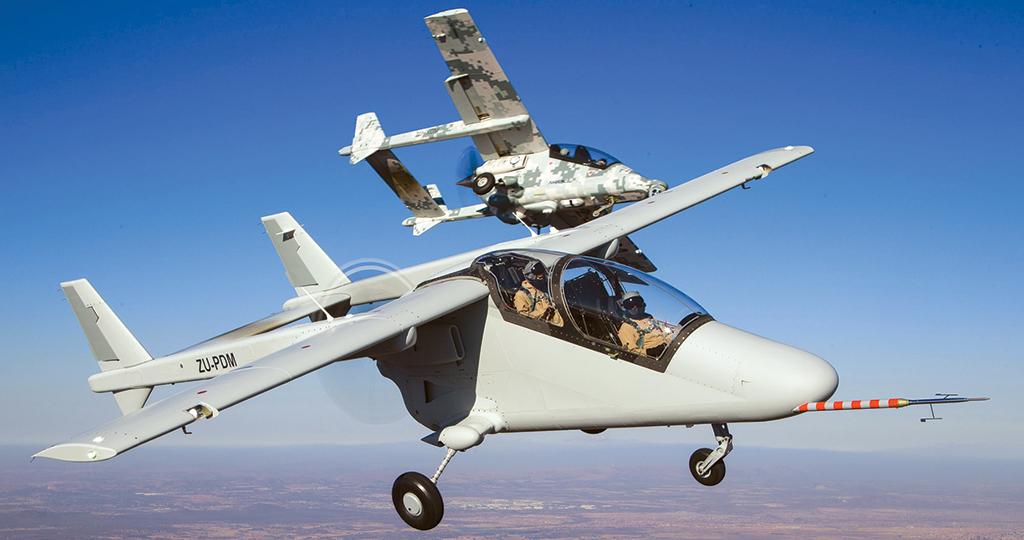 South Africa’s Paramount Group launched production of the AHRLAC low-cost manned ISR aircraft last February. The unarmed AHRLAC first flew in July 2014 and has a high-wing and pusher propeller to provide good all-round visibility for the tandem crew and nose-mounted sensors. The production version adds retractable loading gear, while the armed Mwari has a customized mission
system and hardpoints. 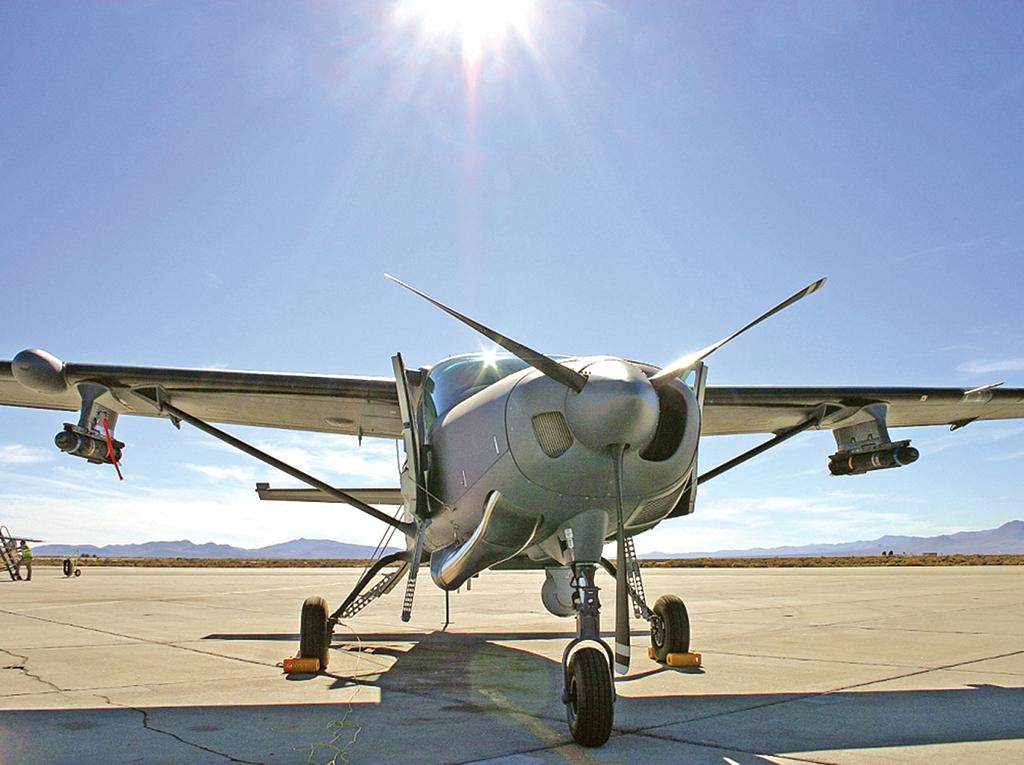 Eliminator is Orbital ATK’s name for the Block II version of its AC-208 Combat Caravan armed variant of Cessna’s Grand Caravan utility turboprop. The AC-208II can carry four Hellfire missiles, instead of two, and has a high-definition MX-15HD sensor and upgraded mission operator station. Iraq operates three AC-208s and Lebanon two. Afghanistan is due to receive the first AC-208IIs. 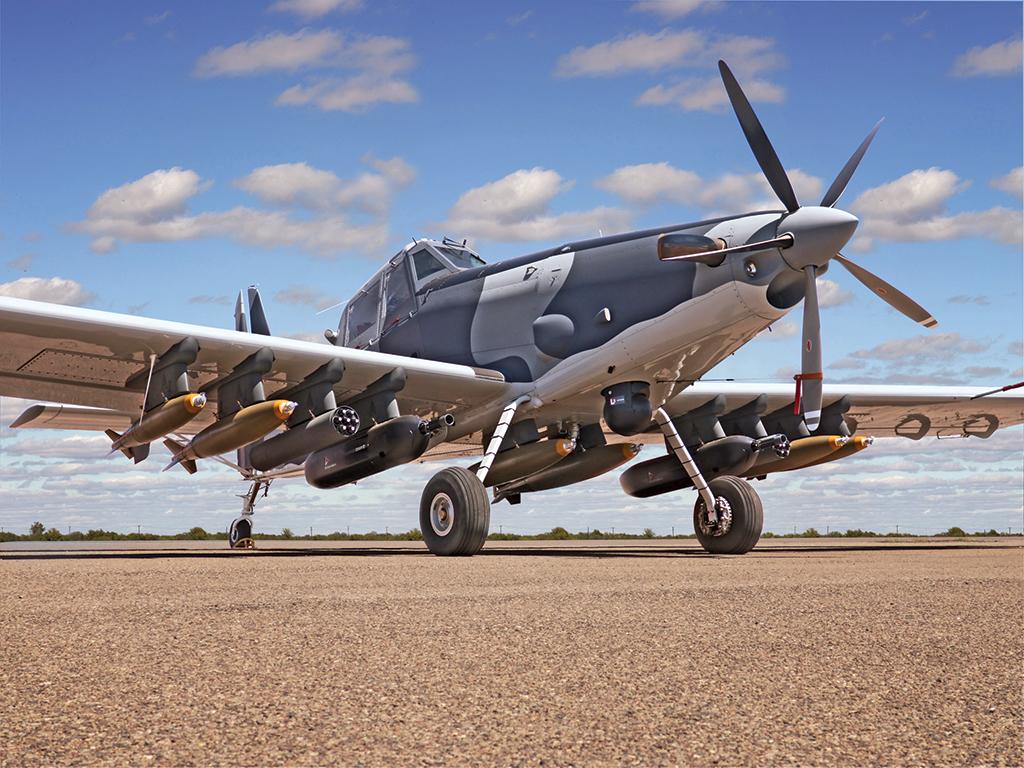 The Longsword is a light-attack/ISR version of the Air Tractor AT-802 agricultural aircraft and follows the armed AT-802U flown by the U.S. State Department, Jordan and Yemen. L3 is the prime for the AT-802L, which adds an MX-15HD electro - optical/infrared (EO/IR) sensor for ISR, and is certifying an “OA-802” configuration to carry precision weapons. Jordan has four unarmed AT-802Ls, and Kenya has requested 12 armed aircraft. 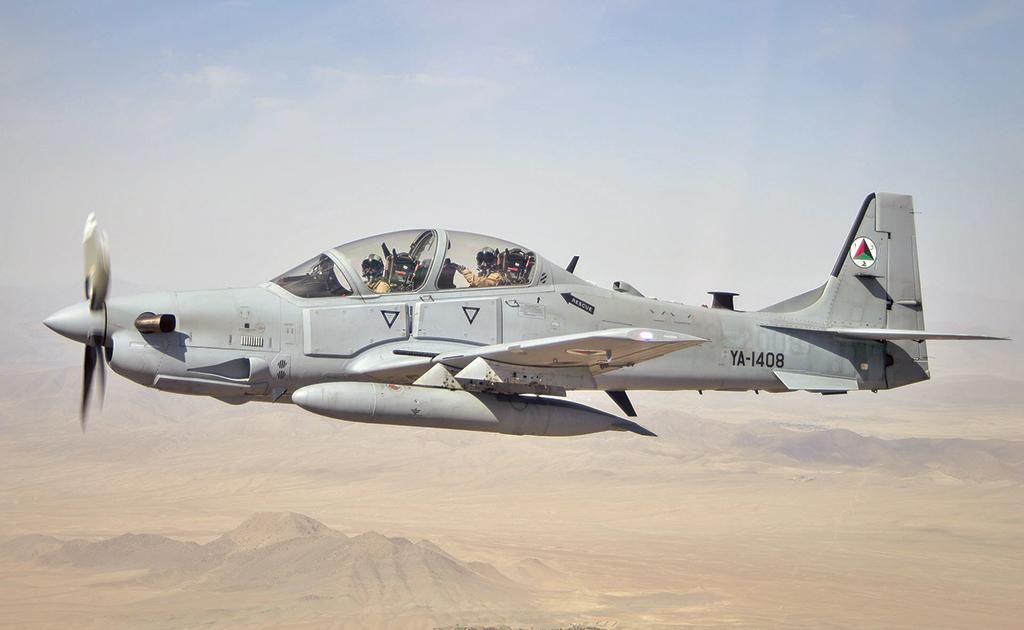 The undisputed leader of the market so far is Embraer’s EMB-314 Super Tucano, aka the A-29, with 150 aircraft sold to 15 countries outside of home customer Brazil. An order for another six from the Philippines was announced in December. The fleet total includes 44 A-29s for Afghanistan, Lebanon and Nigeria, assembled by Embraer in the U.S. with Sierra Nevada Corp. as prime contractor. 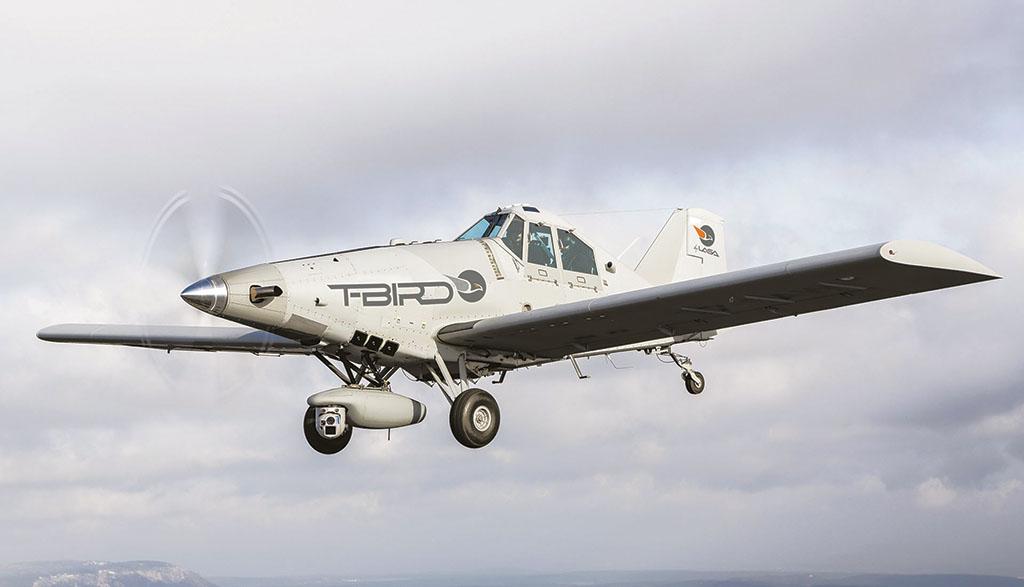 Bulgaria’s Light Armed Surveillance Aircraft Engineering (LASA) unveiled the T-Bird at the 2017 Paris Air Show. The aircraft is based on the General Electric H80-powered Thrush 510G agricultural aircraft and carries an EO/IR sensor and data-link pod developed by Airborne Technologies of Austria.

Textron has brought jet power to the light-attack/ISR market with the Scorpion, powered by two Honeywell TFE731-40R turbofans. Weighing 22,000 lb., the aircraft can carry 3,000 lb. of sensors internally or 6,200 lb. of stores externally. Four company-funded prototypes have flown. 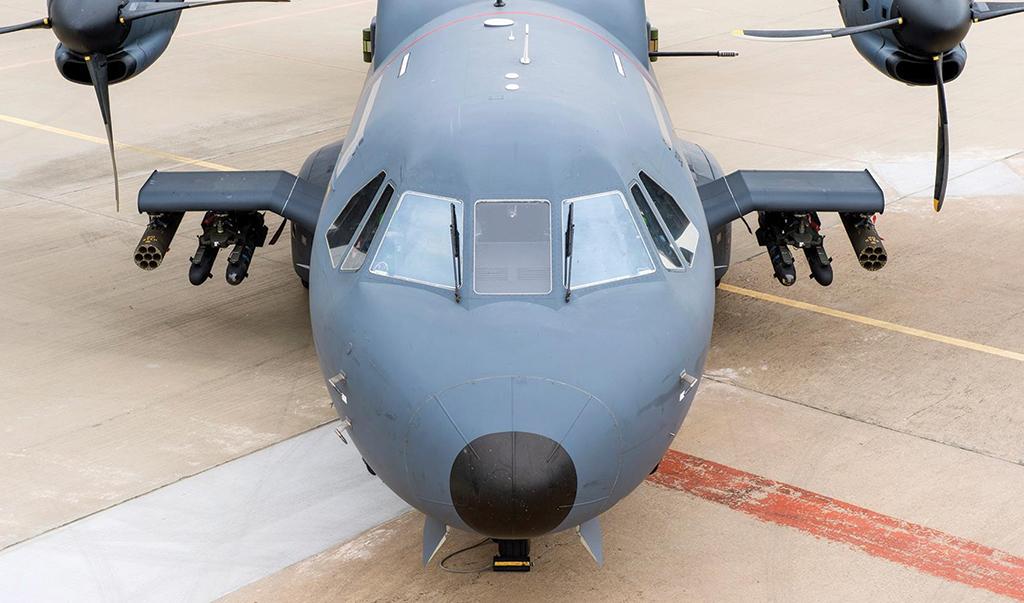 Orbital ATK co-developed the AC-235 light gunship with Jordan based on the Airbus CN-235 transport. Subsequently, they pursued a similar conversion to modify the larger Airbus C-295 into the AC-295 medium gunship. Orbital ATK also worked with Leonardo to develop the MC-27J Praetorian gunship version of the C-27J tactical transport for Italy.

The potential market for aircraft that can perform light-attack and intelligence, surveillance and reconnaissance (ISR) missions affordably has attracted several contenders, some from unlikely places. The appeal is their purchase prices of around $10 million and operating costs of about $1,000 per hour. So far, the market has been slow to materialize. Much of the current excitement centers on the U.S. Air Force’s far-from-certain interest in a 300-aircraft fleet of light-attack/ISR aircraft for counterinsurgency operations. Without this infusion, the market is likely to continue to be focused in the Middle East.