Photo Gallery: How COVID-19 Has Driven Growth At A BizAv MRO 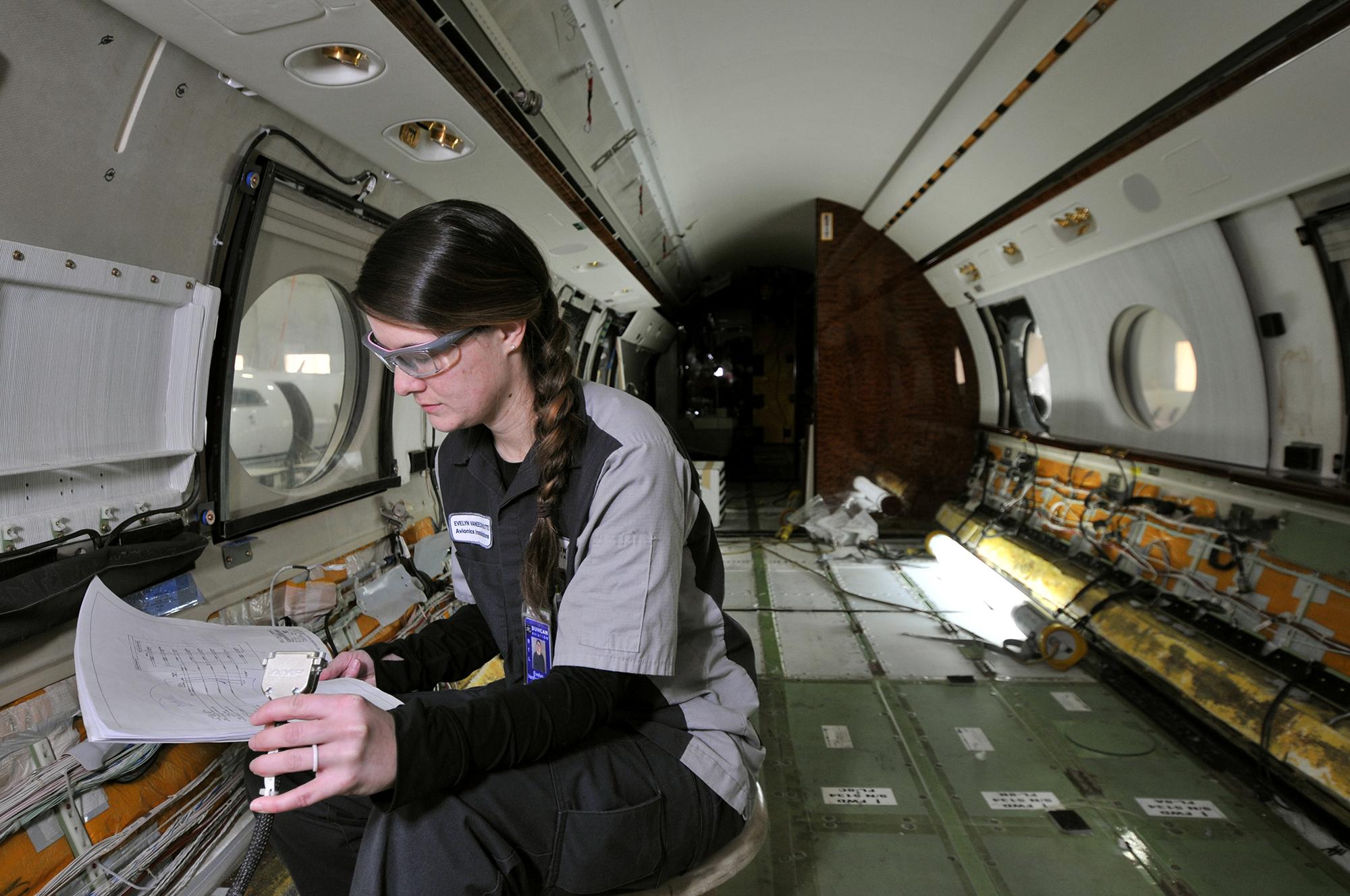 Although the COVID-19 pandemic has caused incredible disruption to the aviation aftermarket, some MROs have weathered the storm and are finding bright spots as they focus on the future. Business jet maintenance provider Duncan Aviation, which continued its growth in 2020 despite aviation’s downturn, has observed some promising trends as a result of the pandemic. Read on to find out more about how the pandemic has actually driven growth in areas such as avionics installations, AOG services and workforce recruitment. 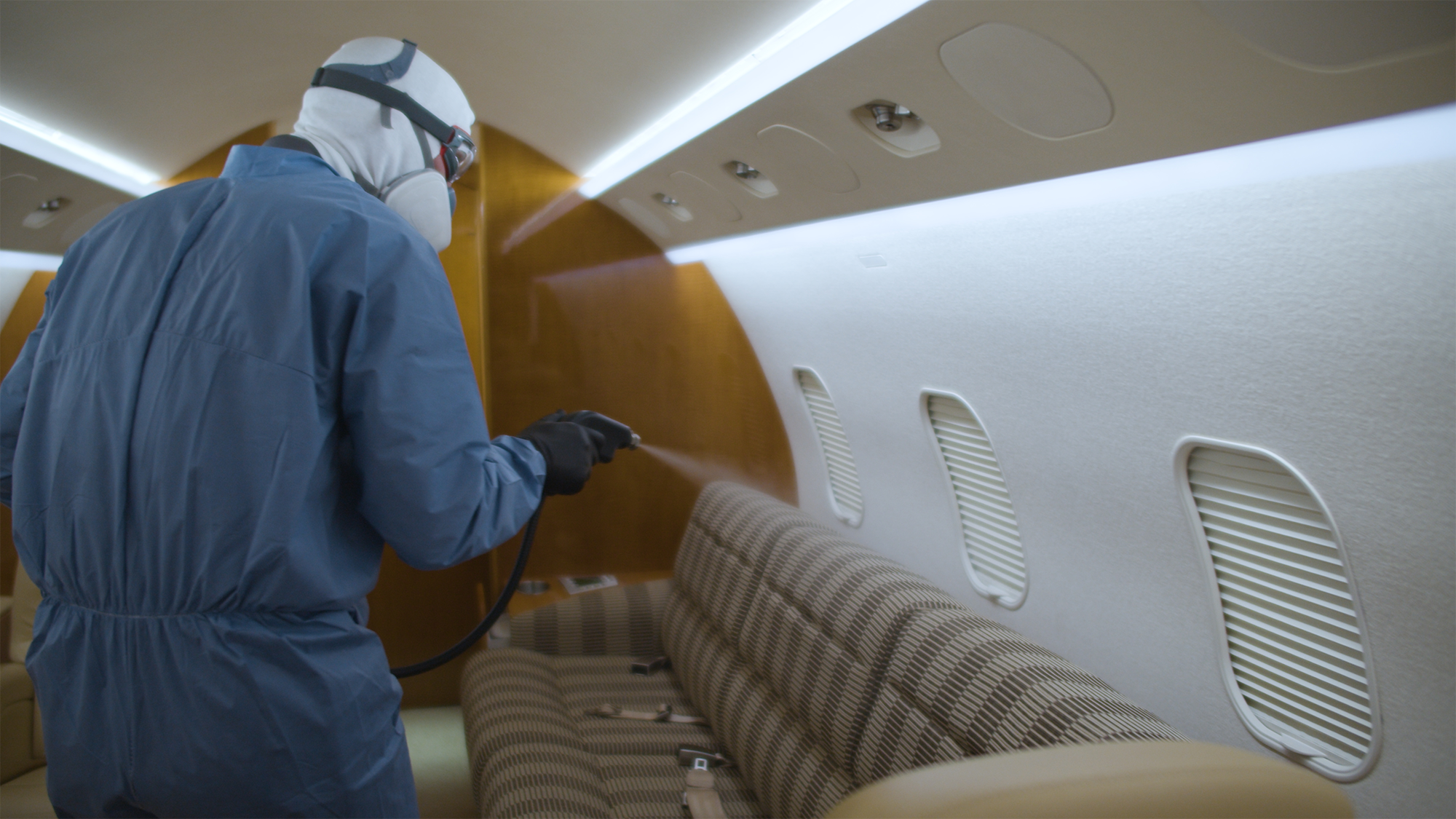 At the beginning of the COVID-19 pandemic, Duncan Aviation began using an AeroClave fogger system to disinfect aircraft upon arrival to the shop and again before delivery to protect its staff and provide better peace of mind to customers. To reduce the risk of damage to delicate aircraft finishes, it put strict protocols into place such as wiping down interior surfaces after disinfection procedures to remove any residual material. 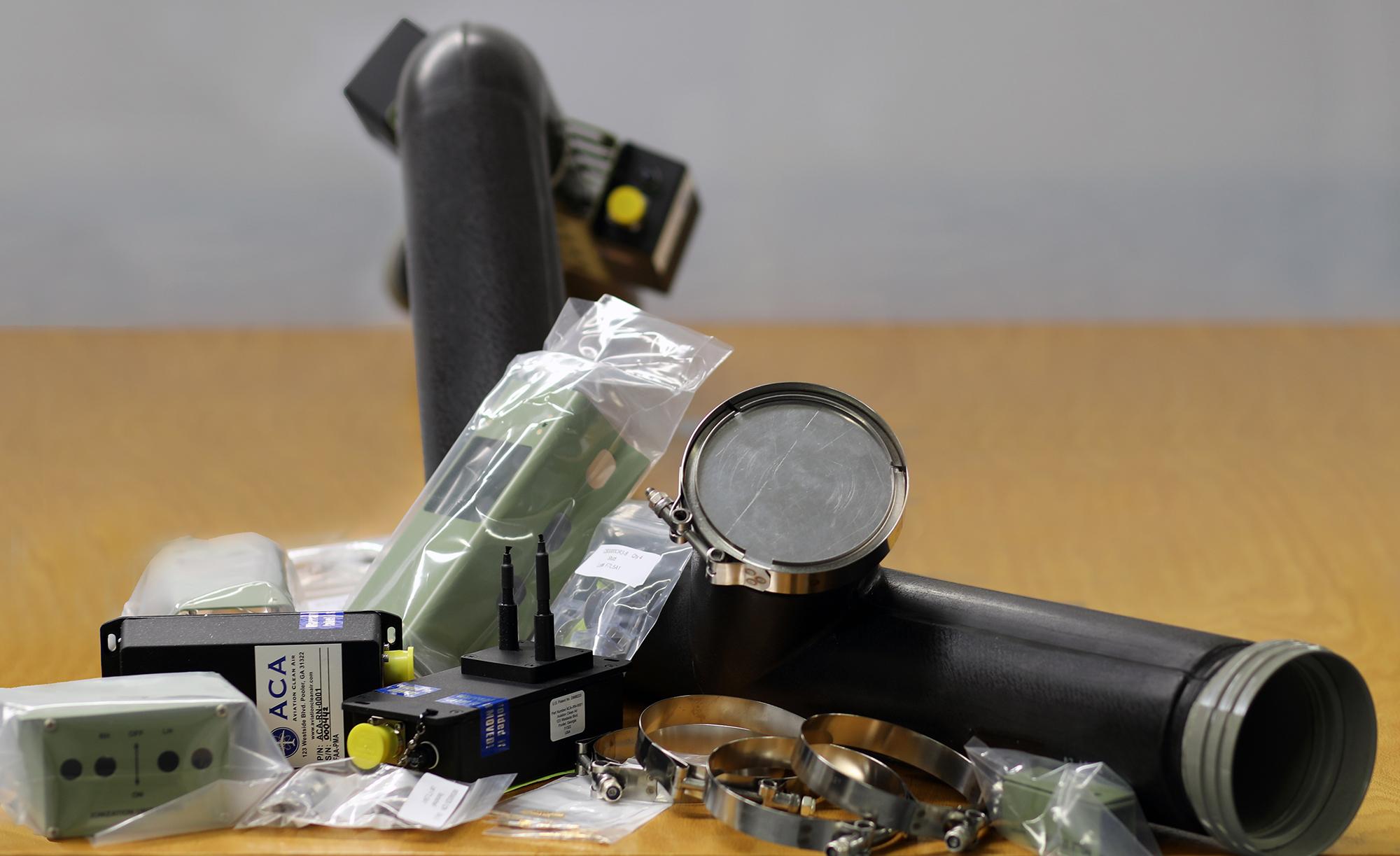 Due to high customer demand, it began installing Aviation Clean Air’s (ACA) Ionization Purification System under FAA Form 337 approval. The system, which is installed in an aircraft’s existing environmental control system, actively kills pathogens while neutralizing potentially harmful gases, volatile organic compounds (VOCs) and odors. Throughout 2020 Duncan Aviation developed supplemental type certificates (STC) to install the system on a variety of business jets, such as the Bombardier Global Express, Challenger and Dassault Falcon 2000. Jeff Lake, president of Duncan Aviation, says the system has become very popular and it is seeing quote requests for it “almost as much as we are now on Wi-Fi systems.” 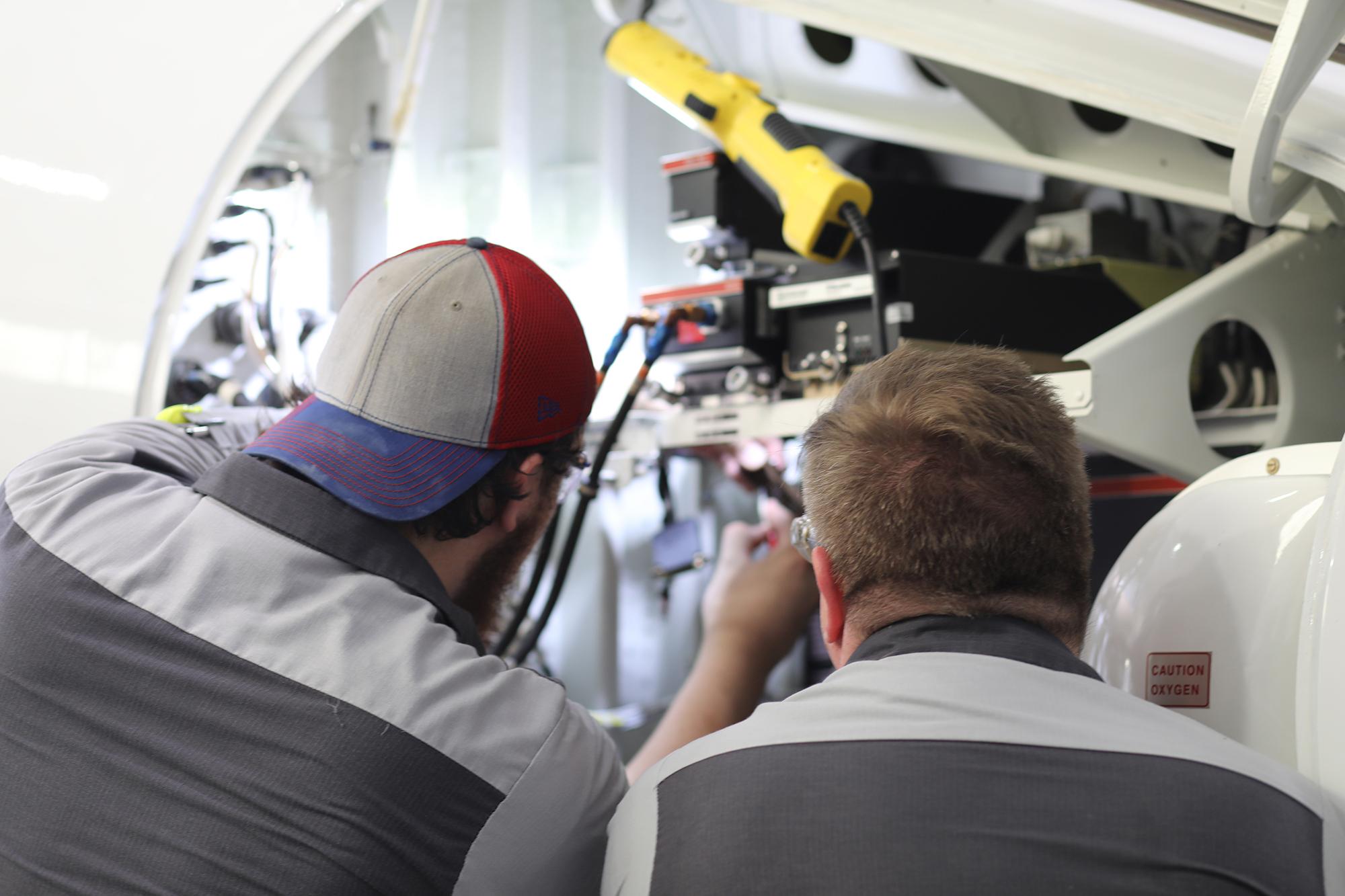 Duncan Aviation says demand for ADS-B installations stretched into 2020, despite the Jan. 1 deadline. “Even in January and February we were still doing ADS-B, so we almost had a double hit there with COVID and the loss of ADS-B,” says Chad Doehring, Duncan Aviation’s chief operating officer in Provo, Utah. “We knew we had to fill that void, so we’ve gone to connectivity. That’s where our marketing and sales efforts have gotten creative on making those systems more attractive to our customers as well—in pricing and subscription rates and so forth.” 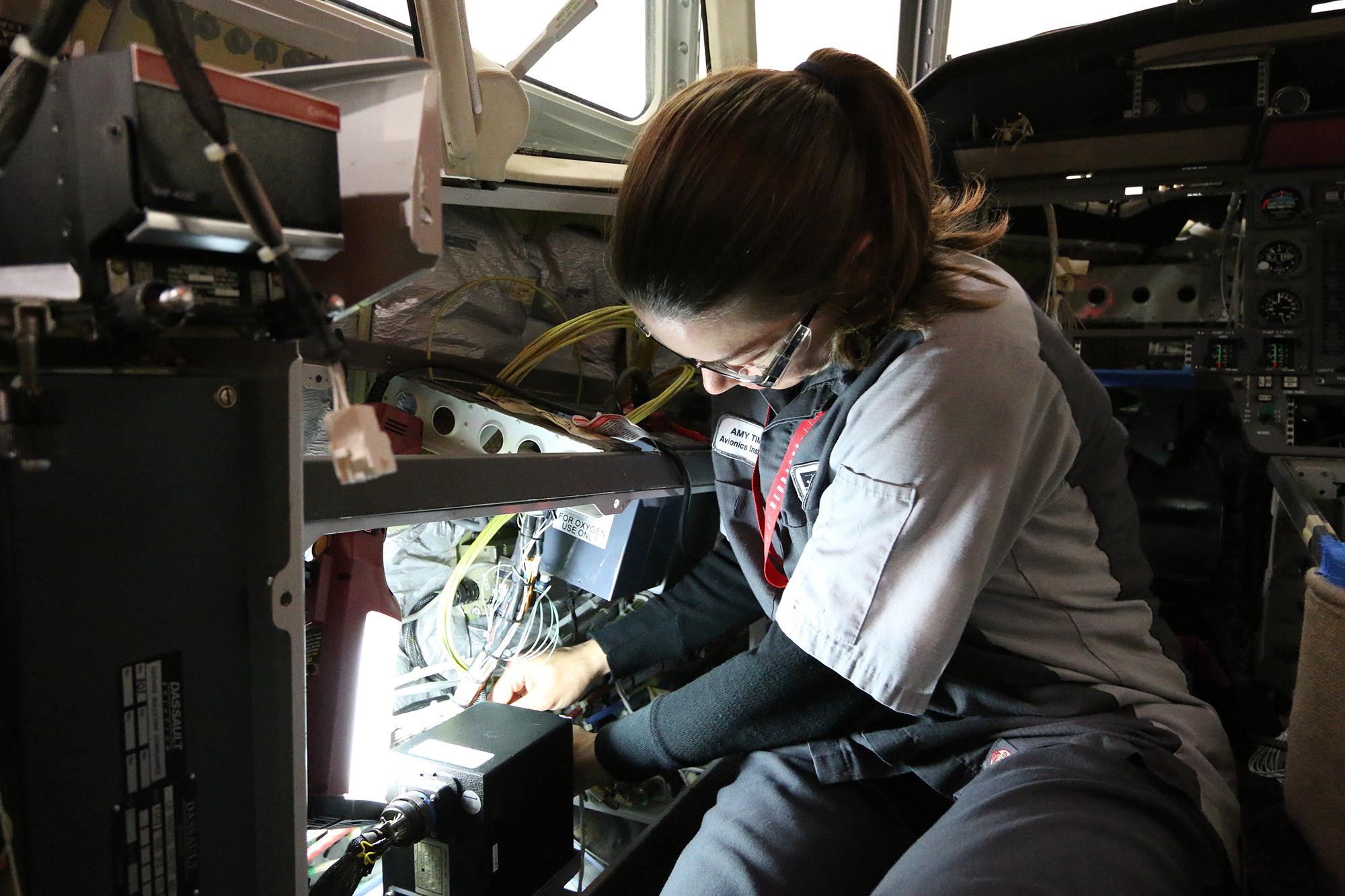 The MRO says its installations of the Gogo Avance L3 and L5 inflight connectivity systems were robust in 2020, with some customers taking advantage of downtime by choosing to get Wi-Fi installed—particularly since most installations are performed in conjunction with other maintenance. It developed a number of STCs for the systems on a variety of aircraft and now holds nine STCs for the L5 system, one of which also approves the L3 system. Soon, it expects to have three of the L5 STCs that also approve the L3 system. 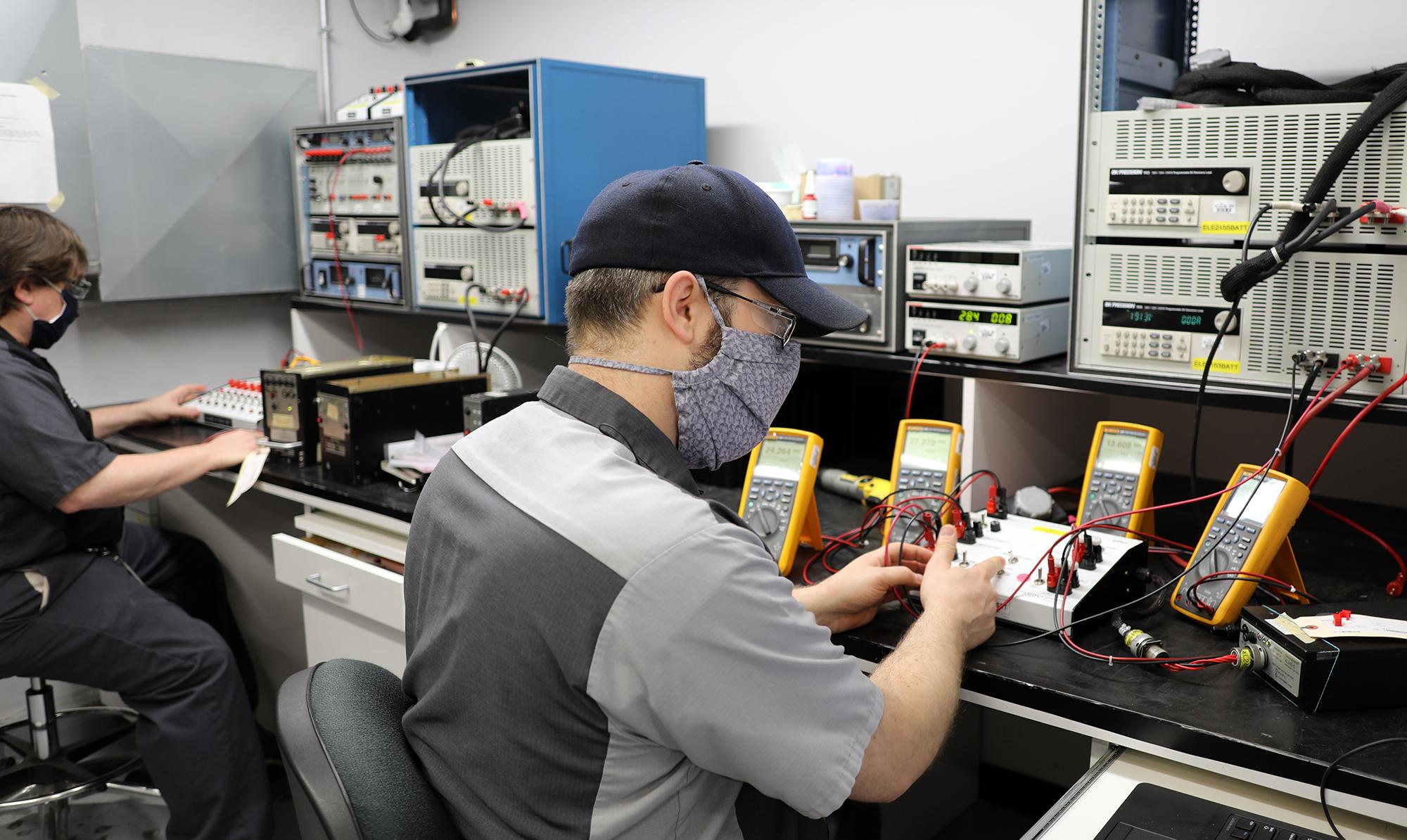 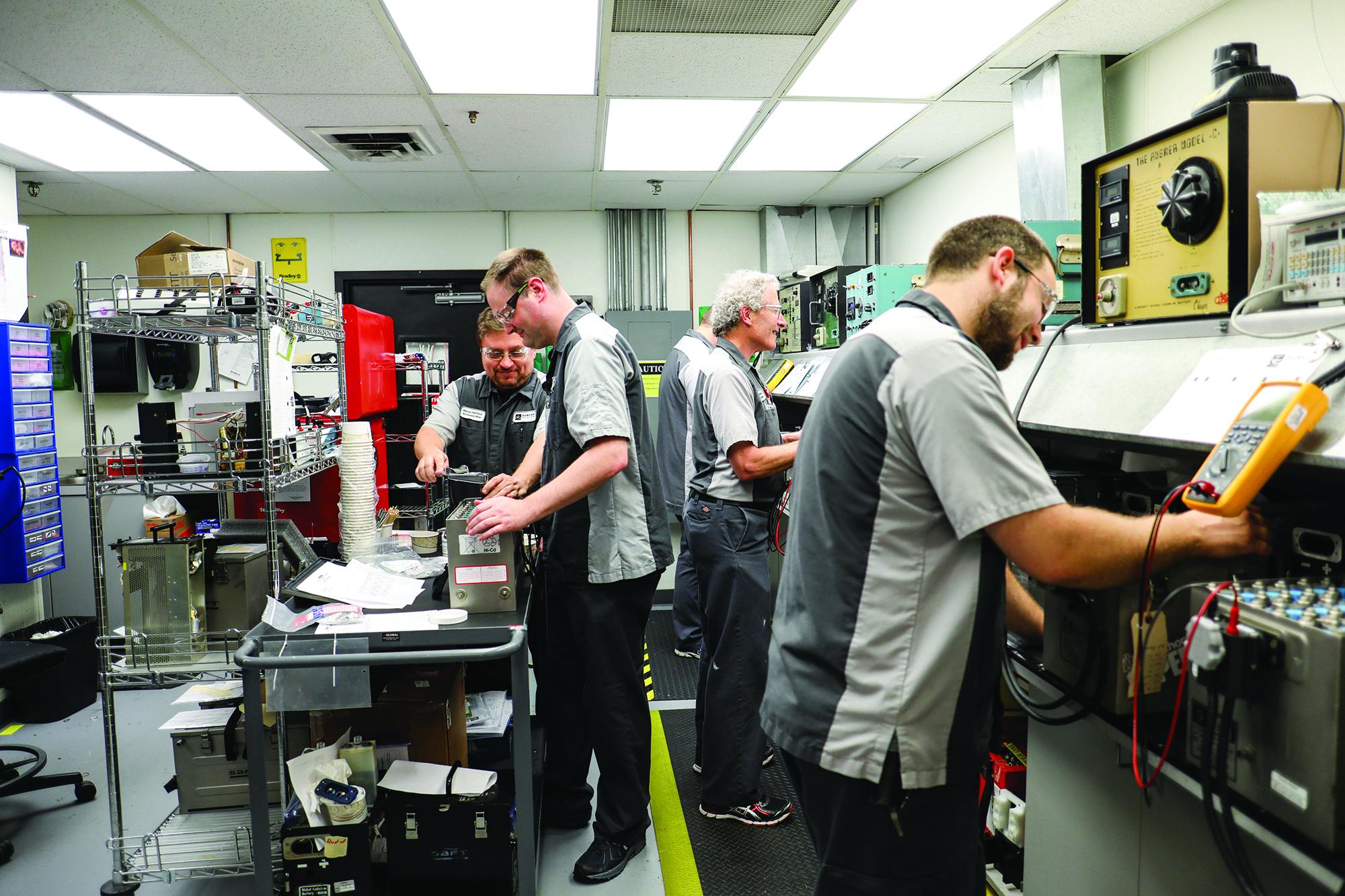 As electric vertical-take-off-and-landing (eVTOL) vehicles gain more traction within the industry, Lake says Duncan Aviation is keeping developments on their radar with thoughts toward potentially becoming involved in their service and maintenance. “We’re probably not diving in feet first, but we’re working with a number of organizations in that regard and just seeing where that goes,” he notes. 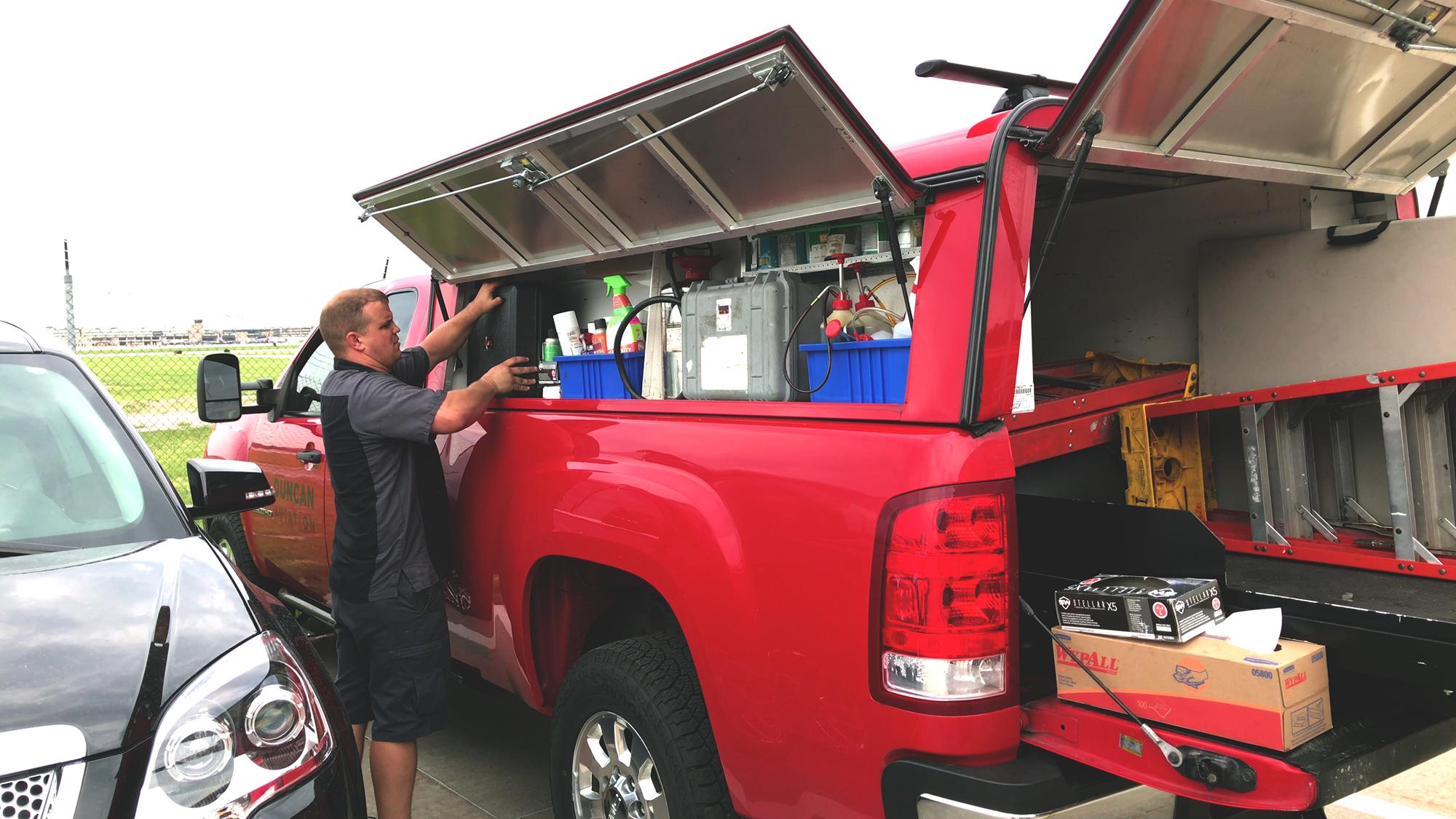 In the past couple of years, Duncan Aviation has been growing its teams for traveling to customer sites to handle various maintenance tasks. It formed three new Rapid Response Teams in 2019 to meet increased customer demand for more mobile airframe AOG and inspection services, and it announced in March 2020 that it had developed larger, dedicated Airframe Aircraft On Ground (AOG) teams at each of its main facilities in Lincoln, Nebraska; Battle Creek, Michigan and Provo, Utah. According to Lake, Duncan Aviation saw significant growth in its AOG services in 2020 because it was one of the few MRO providers willing to travel during the pandemic. 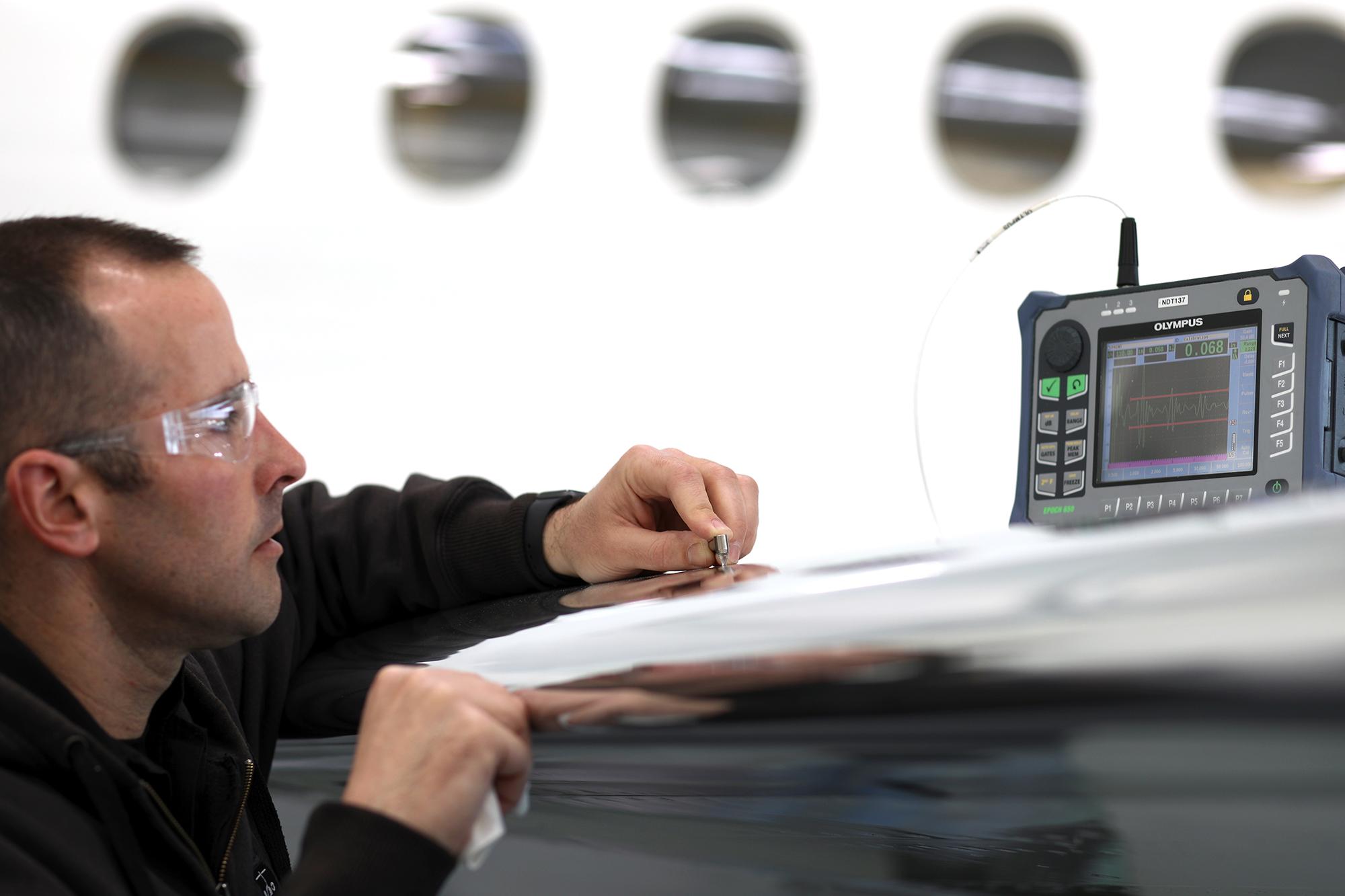 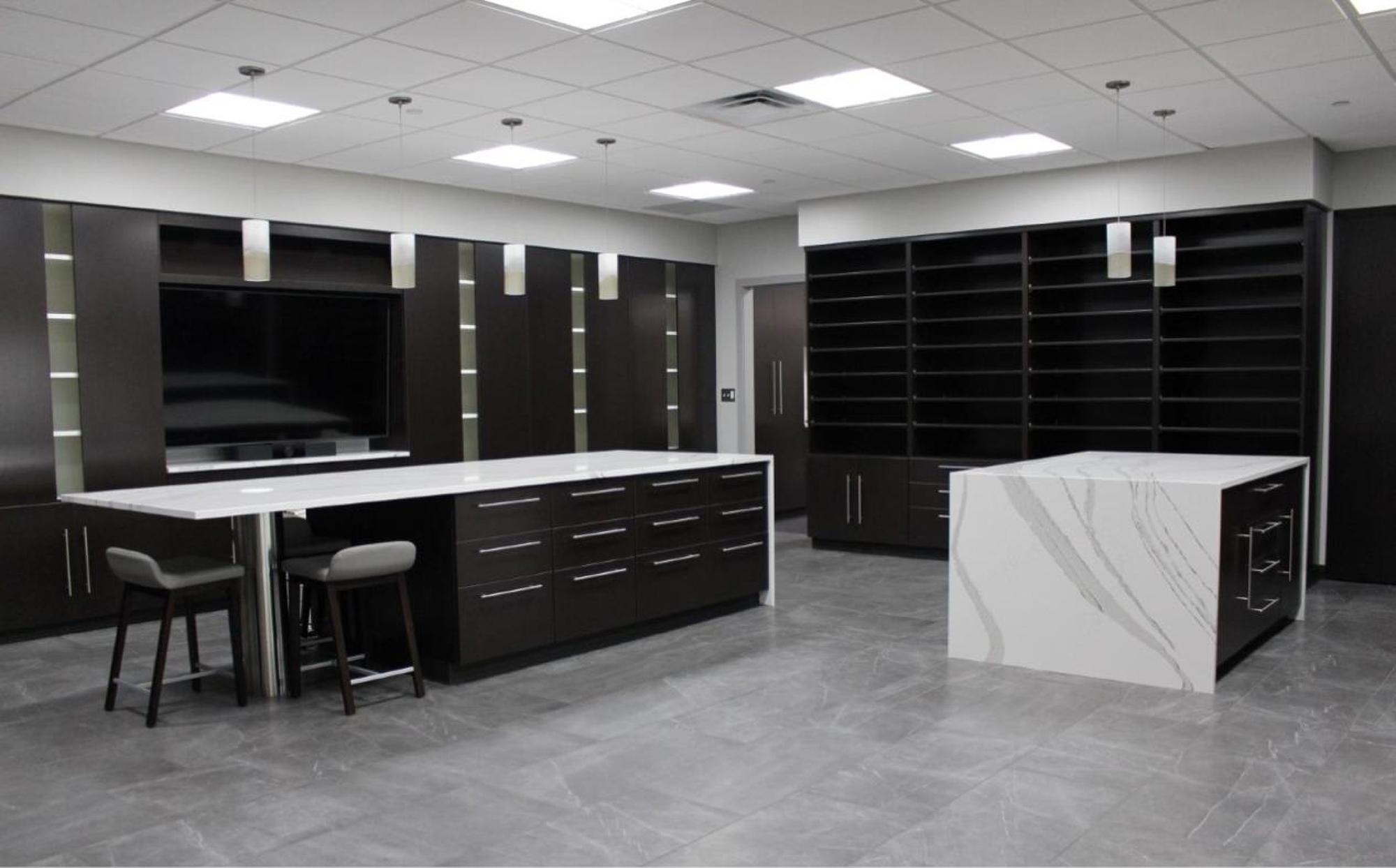 In September 2020, Duncan Aviation unveiled its new Design Center in Battle Creek, Michigan, which followed a remodel of its Design Center in Lincoln, Nebraska and the opening of a Design Center at its new Provo facilities. The new center features a sample library full of cabinets and countertop space to show customers material samples, workstations for designers and a big-screen TV so customers can view 3D renderings of design ideas. Since the pandemic has constrained the ability for customers to visit on-site, Duncan Aviation has been employing a mix of traditional methods—such as mailing material boards to customers so they can see and feel product samples—alongside virtual technology such as Zoom. 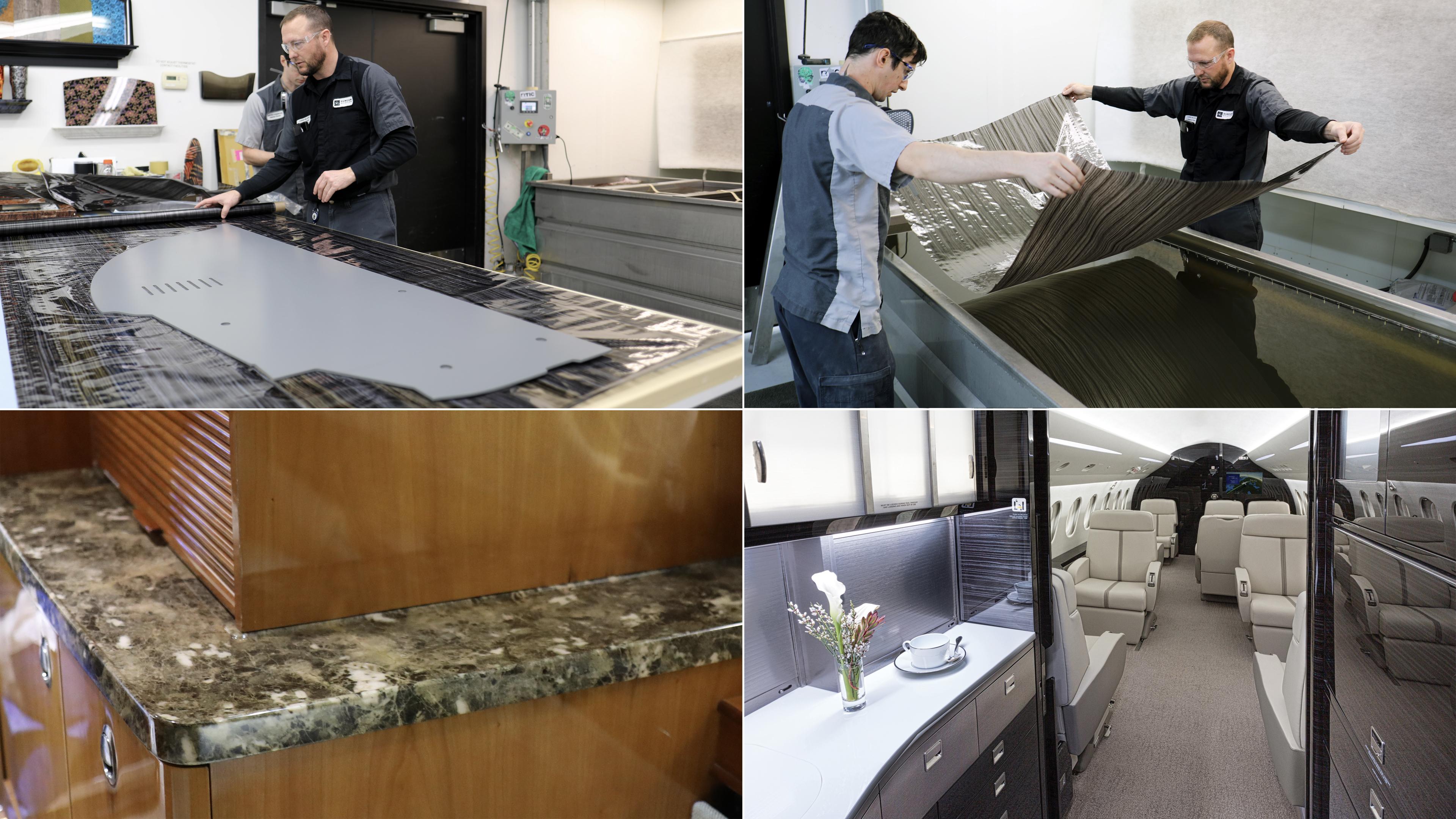 Inside aircraft cabins, Duncan Aviation is seeing increased popularity in the use of hydrodipping instead of using stain finishes on wood. According to Doehring, the process is lower cost and results in shorter downtime and an easily repairable finished product. “The options are endless on the style, design and what you can do,” he says, noting that it can be used on all sorts of materials. In addition to hydrodipping, Doehring says synthetic materials are becoming more popular—both in terms of leathers and some cloths. 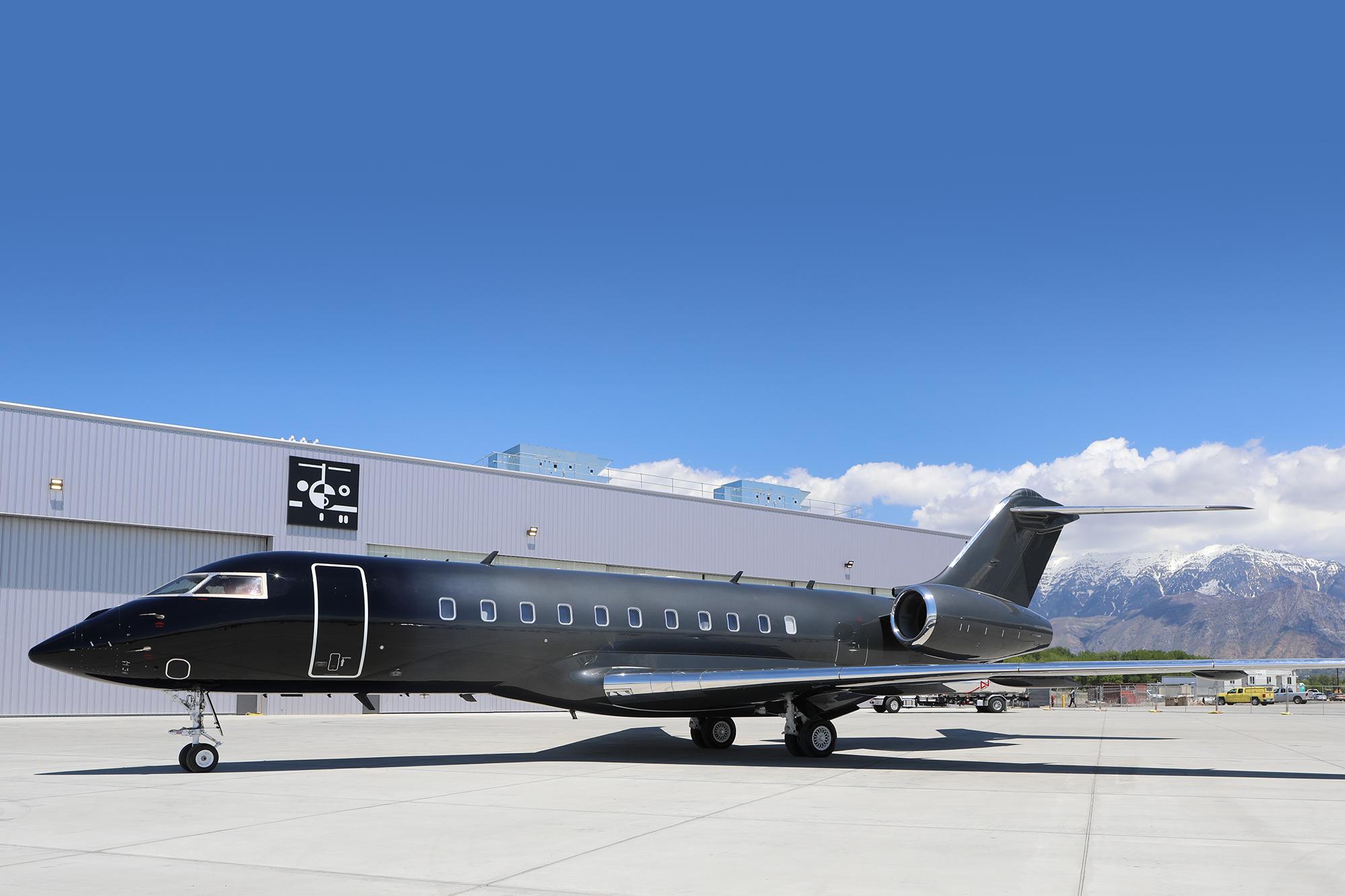 Another practice becoming popular within business aircraft design are wraps, which Lake says have improved in recent years compared to the lower quality wrap products previously available. “The product is very good—you can even finish over the top of the wrap to make it look glazed if you want that,” he says. “It’s easy to repair as well.” 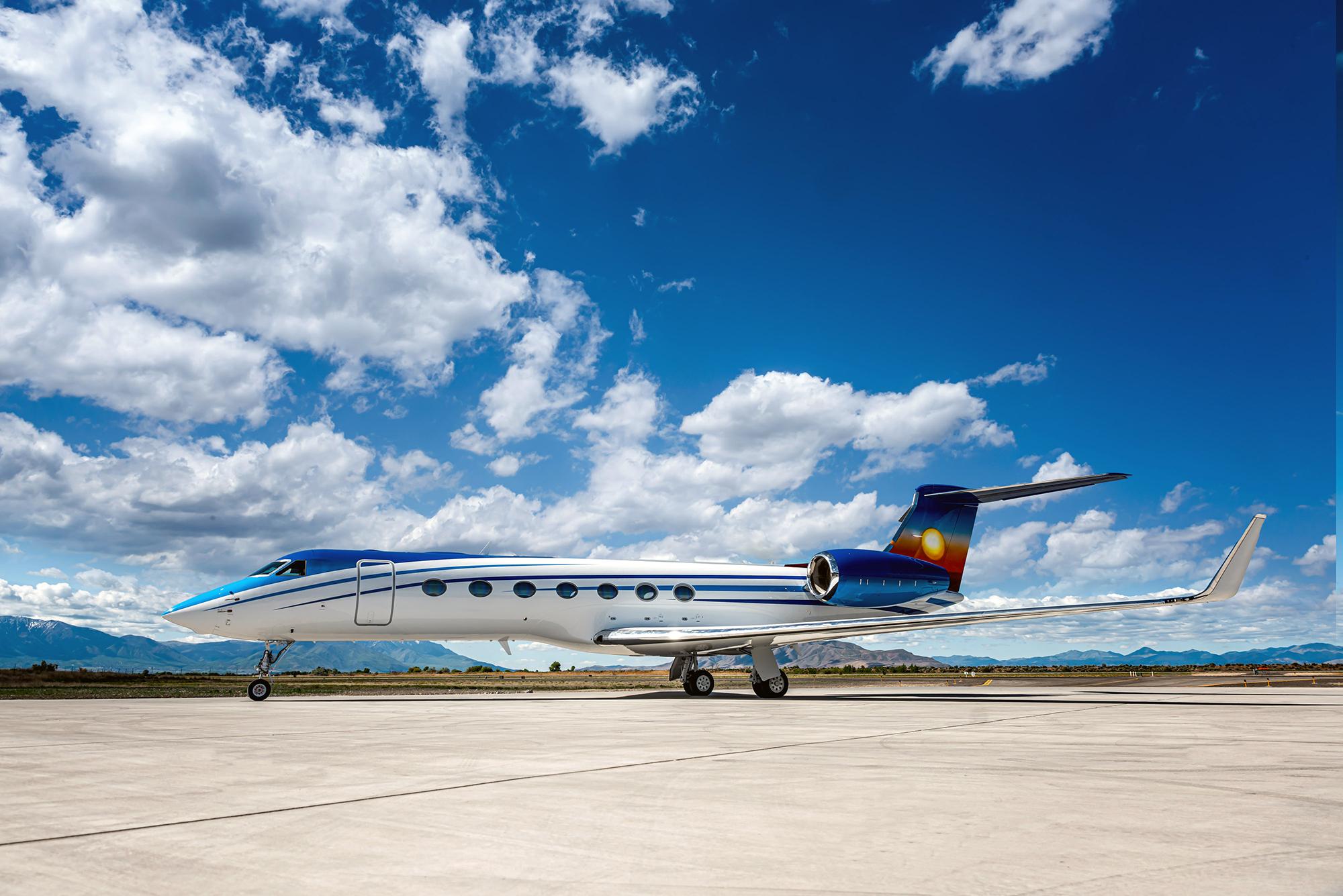 While basic paint schemes are usually popular for business jets, Doehring says Duncan Aviation’s new paint facility in Provo has been performing an increasing amount of custom paint jobs. “We’re seeing some pretty unique paint schemes—anywhere from a digital camo paint scheme to faded paint schemes and so forth,” he notes. “I think we’re starting to see a little more stye in business aviation; a little more flair.” 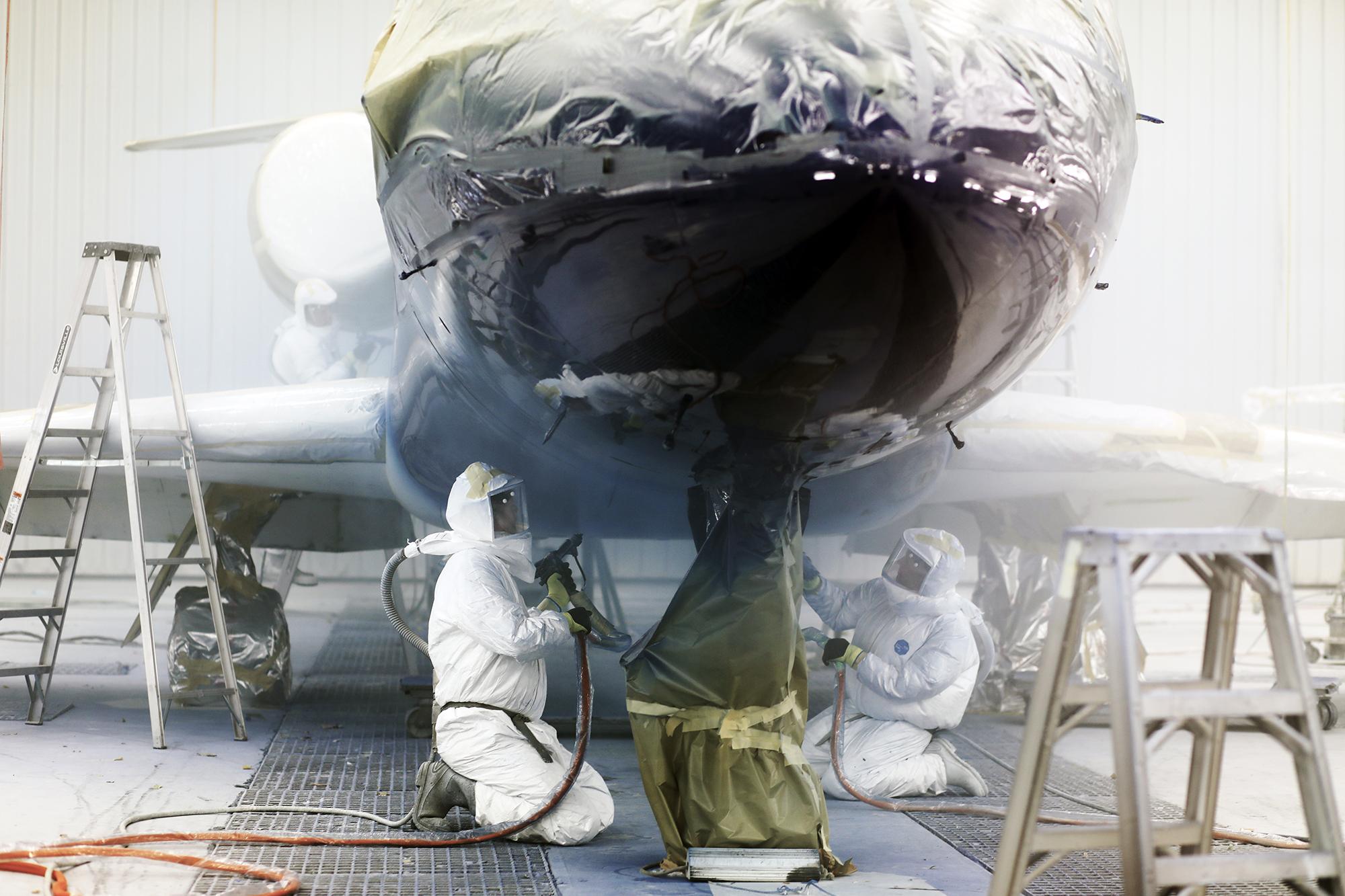 The Provo paint facility opened in April 2019 and has completed more than 40 paint jobs so far. While the facility is an exact duplicate of Duncan Aviation’s paint facility in Lincoln, Nebraska, it also includes some unique environmental features due to local regulations, since the air currents in Utah Valley tend to hold down pollutants. The facility has installed an oxidizer that burns off VOCs, water treatment technology and an air curtain to reduce the amount of dust that can be carried to other areas or outside of the facility. Doehring says the facility is completely green and does not release any waste stream or air with VOCs. 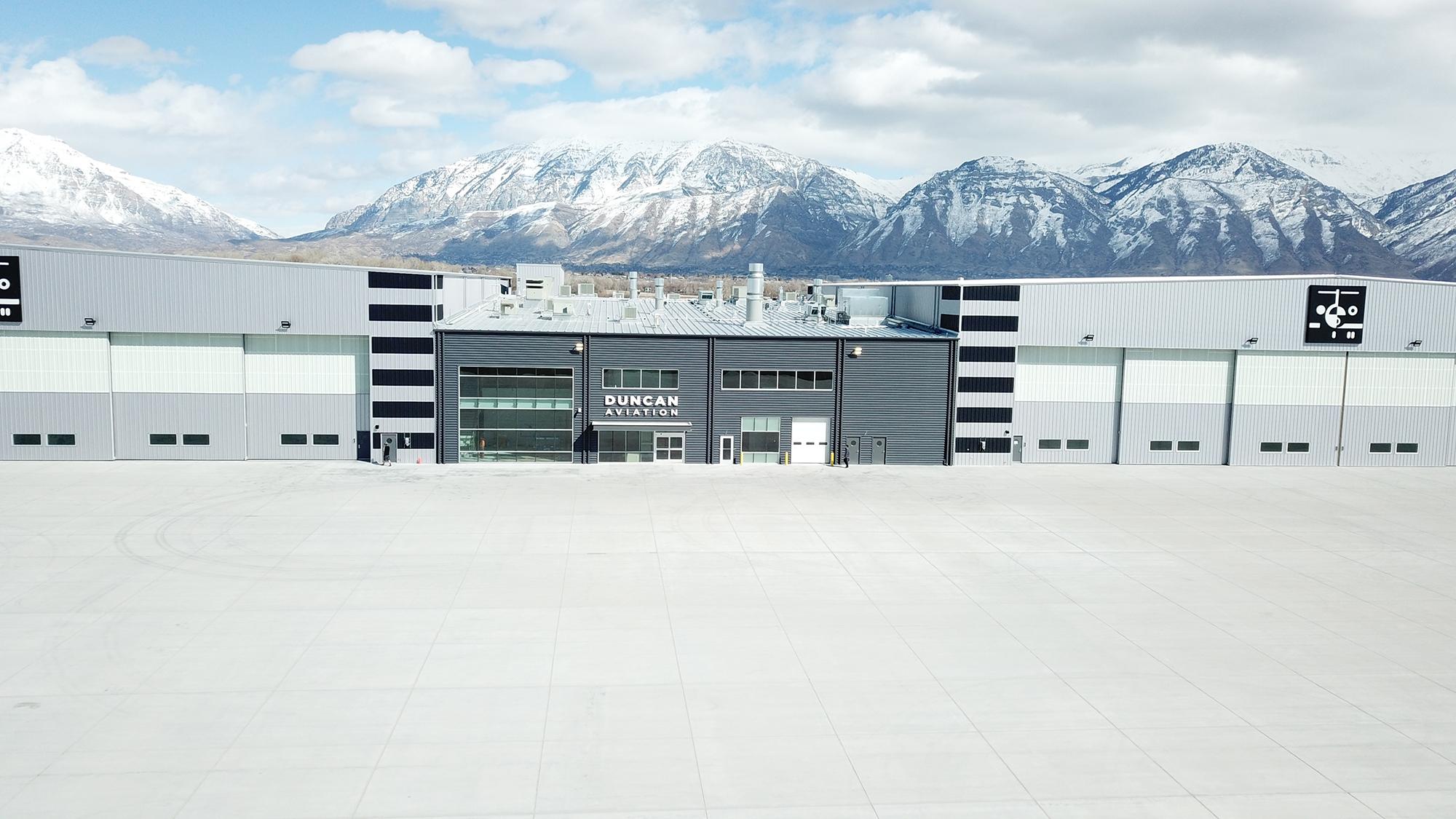 In addition to the paint facility, Duncan Aviation’s first phase of expansion in Provo included opening a hangar with limited airframe, engine and interior capabilities. The expansion was completed in May 2020 and the site now has full capability for interiors, avionics installations, engines and accessories. Doehring says Duncan Aviation is continuing to add more capacity in each area. 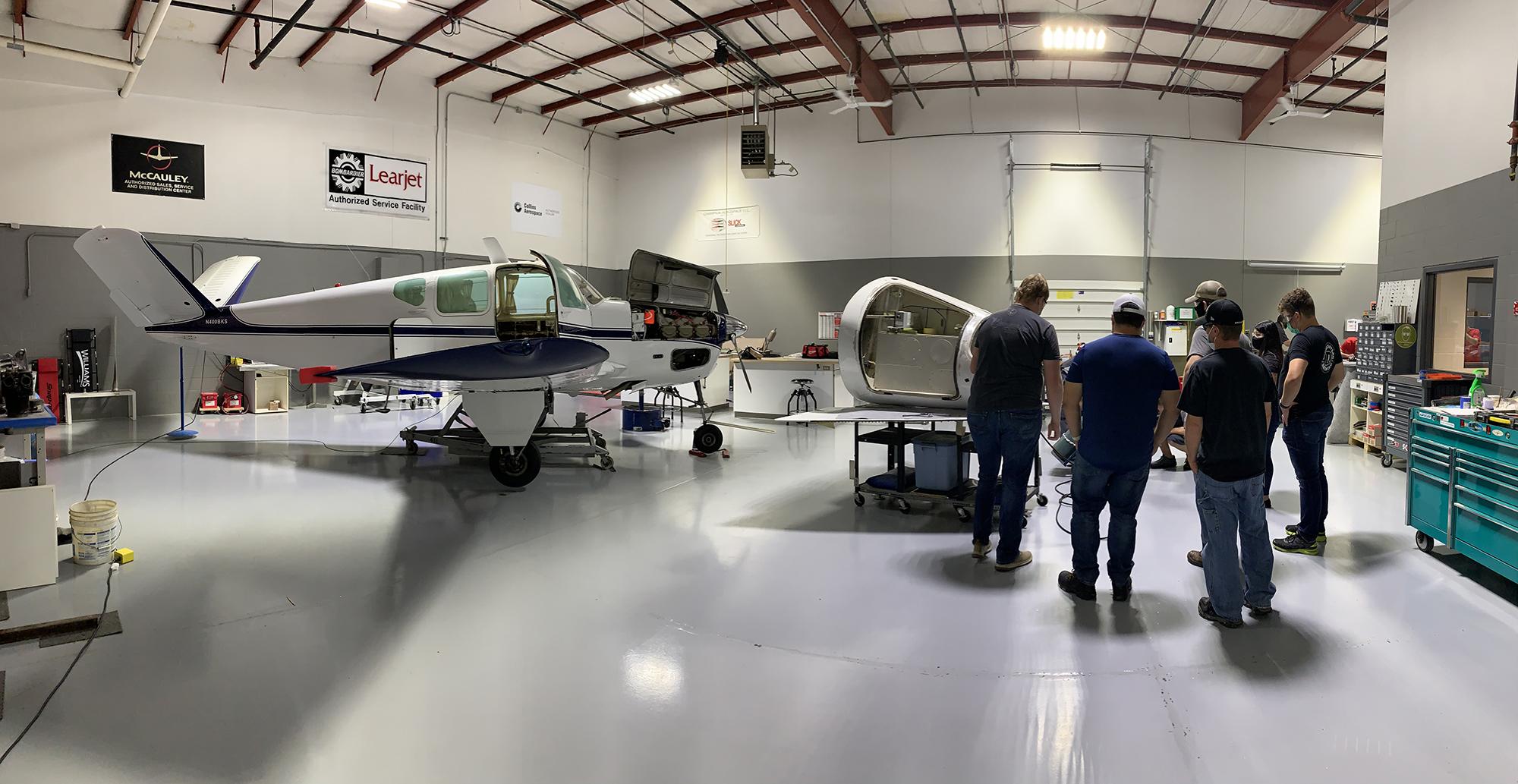 Despite workforce constraints during the pandemic, Duncan Aviation started a new Powerplant Apprenticeship program in August 2020, which will last for 24 months. Doehring says both the new program and its existing Airframe Apprenticeship program have been “wildly successful and very popular with our folks that are not certificated.” The programs enable technicians to obtain their A&P licenses while getting paid to work. 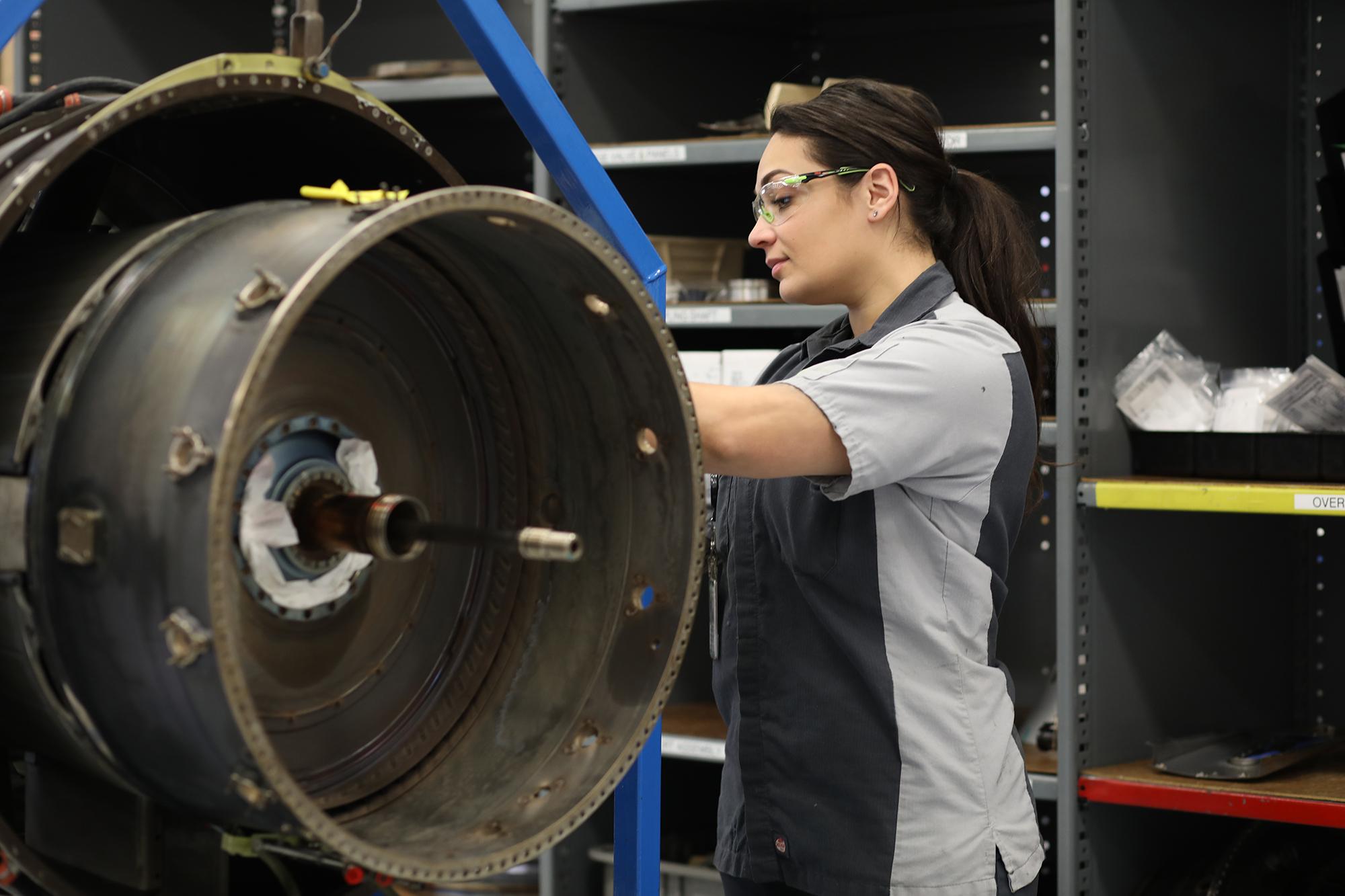 In addition to the apprenticeship programs, Duncan Aviation offers an internship program that targets high school students with the aim of handing out job offers to interns that performed well. “This is one of our answers to the workforce shortage of A&Ps,” notes Doehring. “We felt that this was one way to control our destiny and our workforce for years to come.”

“We’re really trying to change things by way of diversity as well,” notes Lake. “We’re seeing more and more females interested in this [career path], so it’s been great to get into the high schools and look for another group of people there. The old standard of it being a bunch of young guys working in the hangar is changing.” 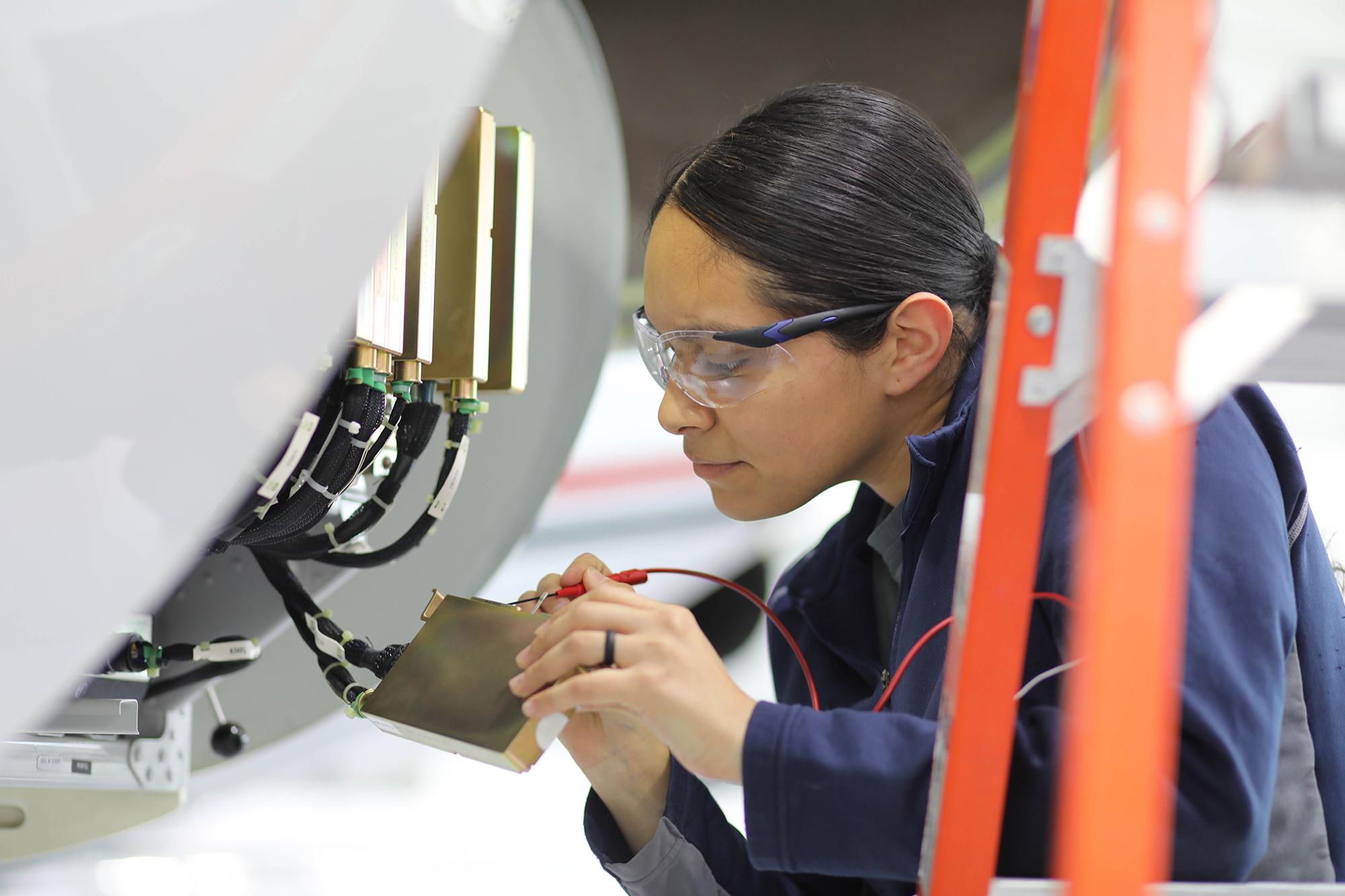 Doehring points out that an advantage business aviation MRO might have over commercial MRO in enticing younger generations is that the aircraft themselves are high-tech. “The business aviation aircraft is the most technological aircraft that’s out there compared to commercial. Commercial is probably about 15 years behind where business aviation is in the navigational communication and the cabin entertainment [systems],” he says. “Then you start talking about the airframe systems and how computerized that is, you start explaining that to these young people in ways they understand, and that’s really what starts piquing their interest.” 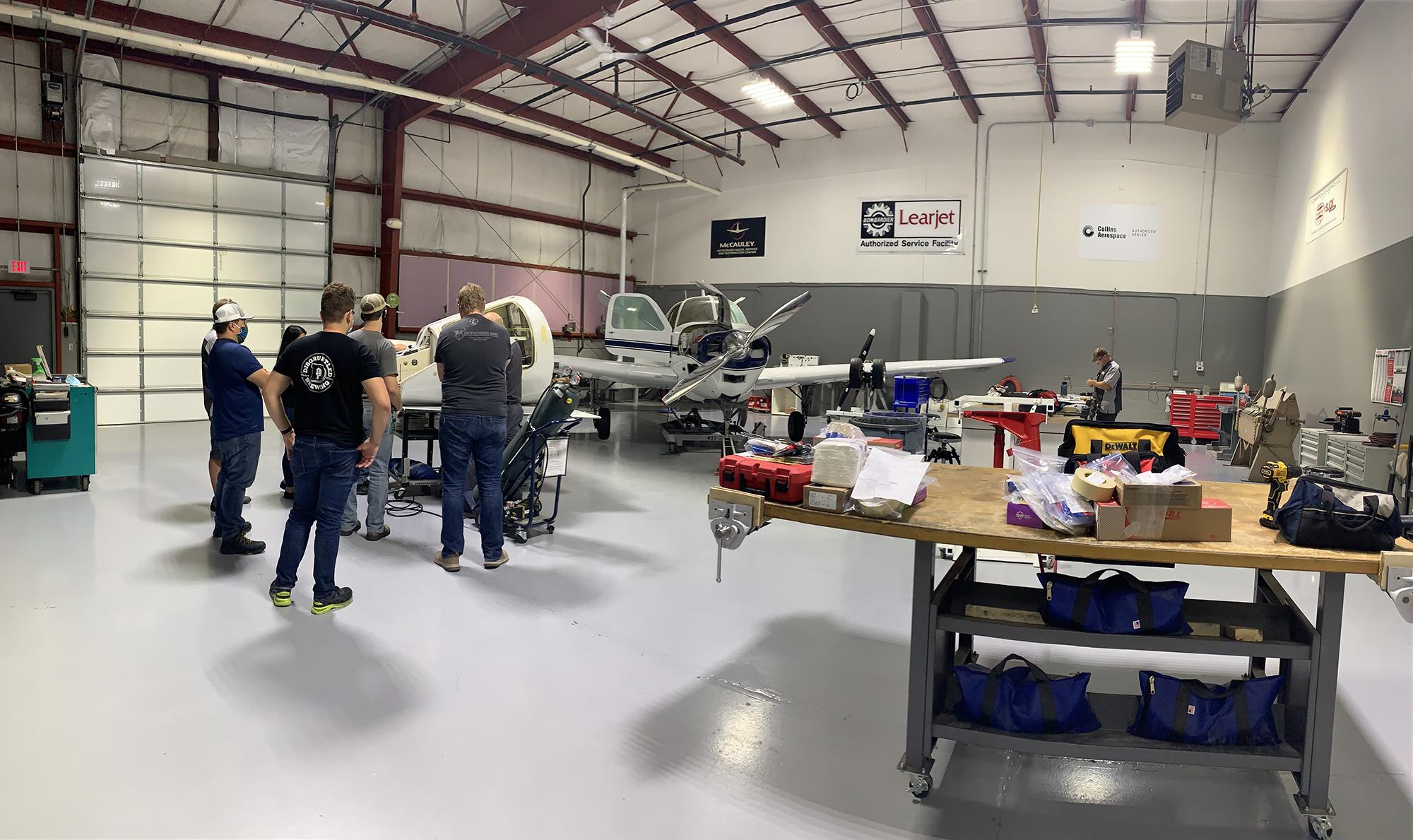 Business aviation MRO has also seen a small boost in the applicant pool because of the reduction in available jobs within commercial MRO due to the pandemic. “That demand was so huge last year from the commercial side that it was quite honestly taking up the applicant pool that may have been there for us, so we’ve taken advantage of that and we’ve actually made some really good hires through the pandemic because those applicants were there and they’re accessible as well,” says Lake. 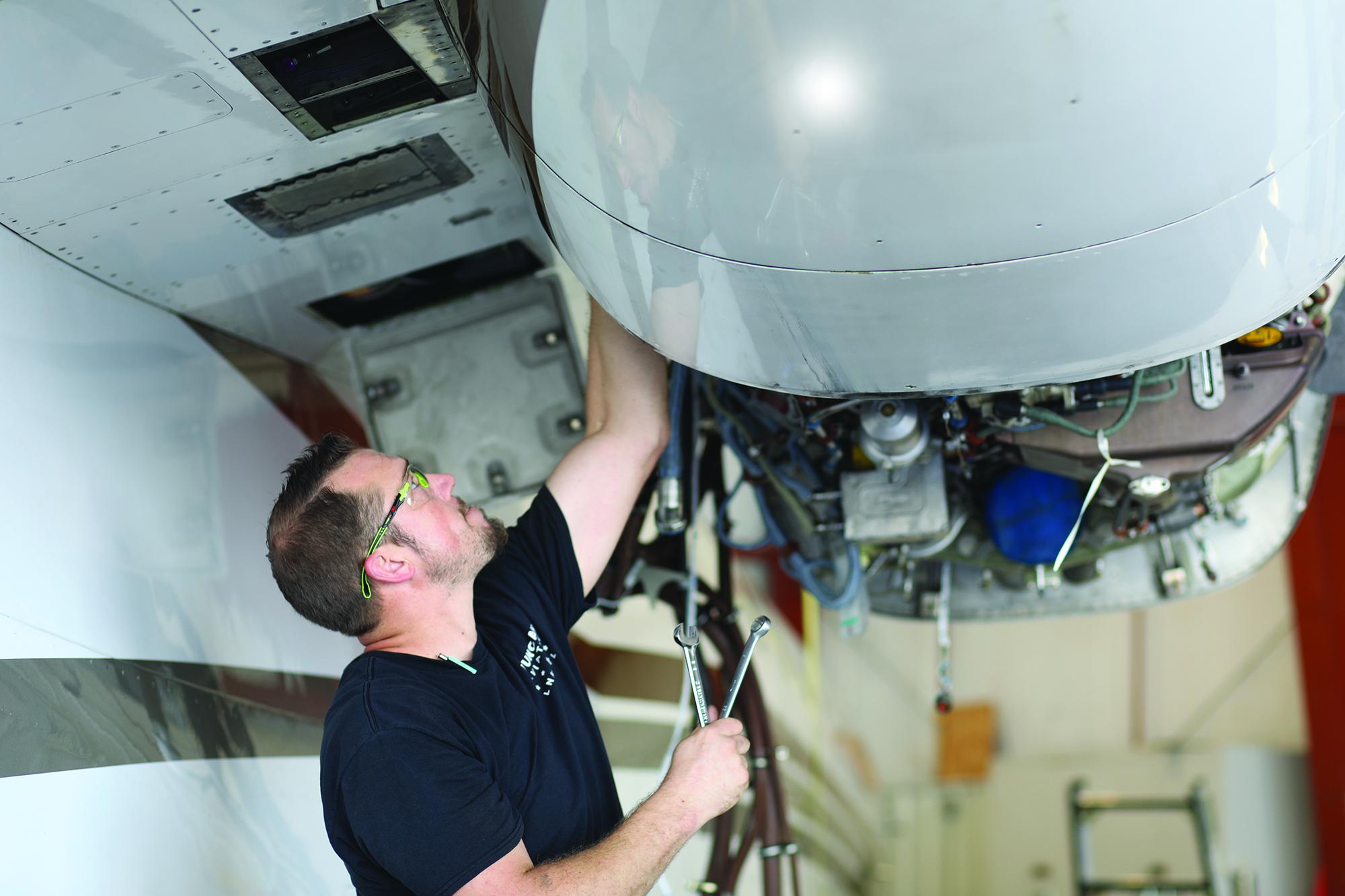 Looking to the Future

Another bright spot for business aviation MRO during the pandemic has been new entrants to the market, with some customers that used to fly commercially in first or business class now looking into aircraft ownership instead. “[Within] the charter business, some of those customers are having the best year they’ve ever had. Some of the fractionals have been doing very well, and so I think what we’re seeing is new entrants into our industry,” says Lake.

While business has picked back up and Duncan Aviation has kept hangars busy with customers taking advantage of downtime to get maintenance work performed, Lake says general aviation flying hours are still only at around 85%. “We see 2021 starting like how 2020’s going to end. In fact, we really don’t see a return to what you could say is normal until 2022 sometime,” he says. 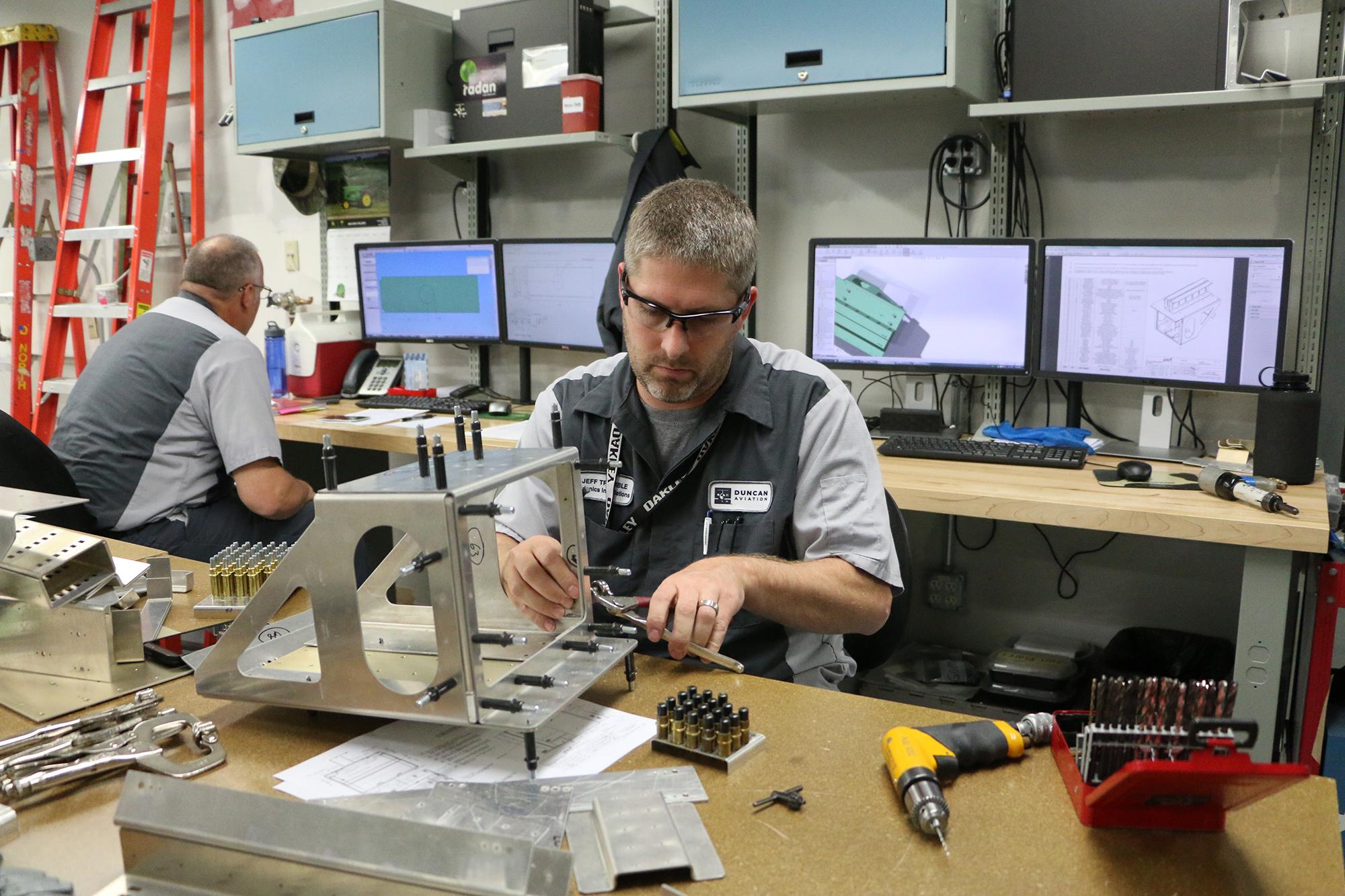 Although in 2021 Duncan Aviation plans to focus mainly on returning headcounts, hours and capacity to normal, there are some areas where the company is eyeing growth. It recently expanded capabilities for fabrication of parts and structural work, which it plans to grow at its Lincoln, Nebraska location. It recently built a new Flammability Lab in Battle Creek, Michigan, which is expected to begin operating by March. It also plans to grow its AOG operations in line with increased demand as customers become more savvy about doing work at their home locations. Approximately 15-20% of Duncan Aviation’s business is performed for international customers and it expects to expand its global customer base in the future.

A look at how effects of the pandemic have driven aftermarket growth at Duncan Aviation, including avionics installations, AOG services and workforce recruitment.