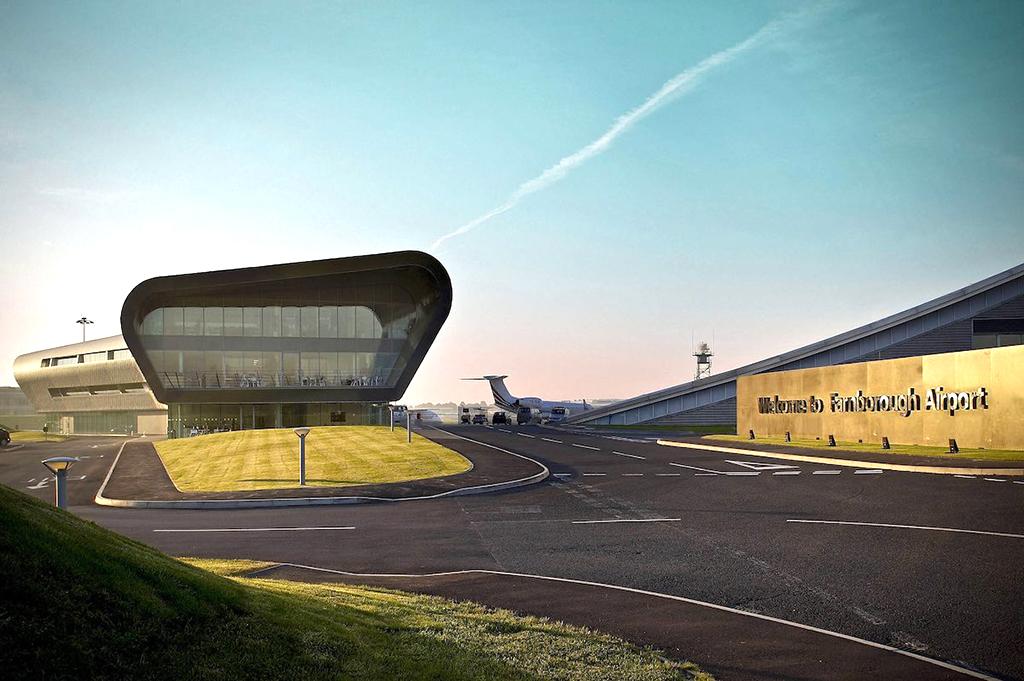 The main terminal/FBO building (left), viewed from inside the main gate of the airport. It is separated from the hangarage (right) by a roadway giving access onto the apron. This enables cleared passengers to be driven direct to the aircraft within seconds of arriving on site. 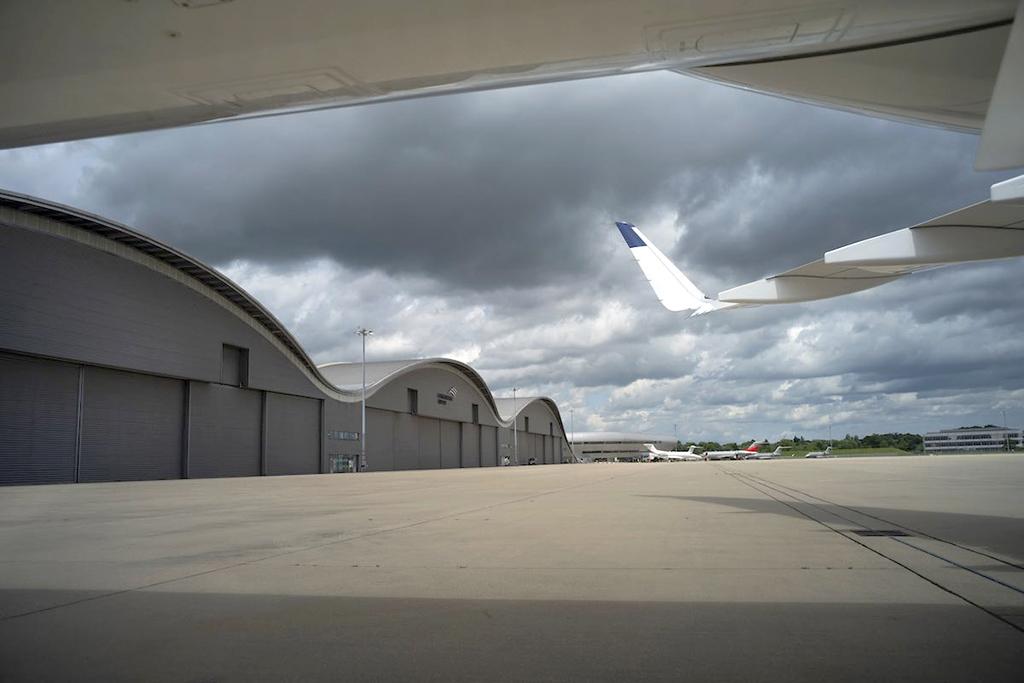 The main workspaces of Hangar 1 sit beneath a single undulating roof on the boundary between airside and the airport’s parking areas. Hangar 2, which also has the same wave-like external appearance, was built adjacent in 2012. The two buildings comprise 220,000 ft2 of climate-controlled space. A new hangar, in a complementary design, is due to begin construction later this year. Hangar 3 will be fully airside and will be built between the FBO [visible in the center of this image] and the runway. 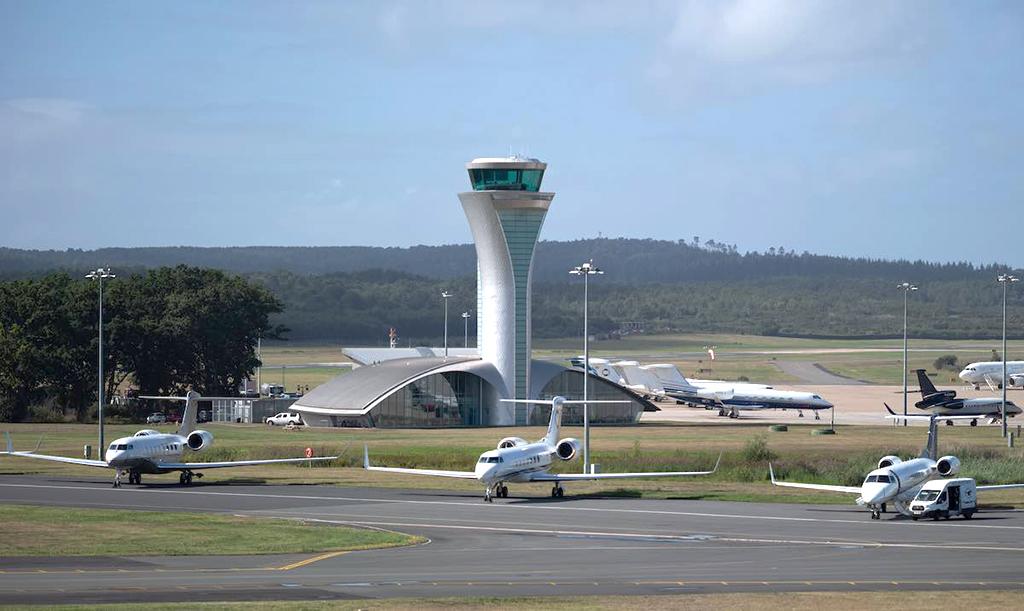 The tower, opposite the FBO and hangars, echoes the design with curving roofs at ground level and a brushed metal finish. It was part of the first phase of work, along with Hangar 1, which opened in 2002. 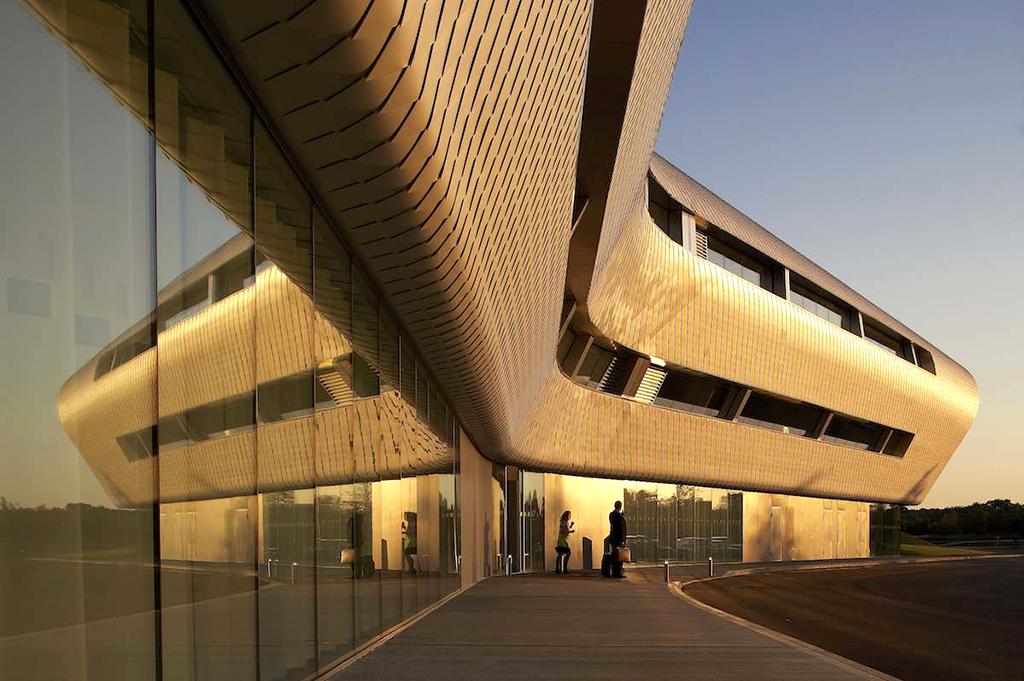 The terminal building designed by 3DReid took account for the fact that most business travelers prefer to spend as little time as possible on the ground. The main entrance to the FBO is at the apex of its arrowhead plan [center of image], symbolically pointing travelers out toward their aircraft. 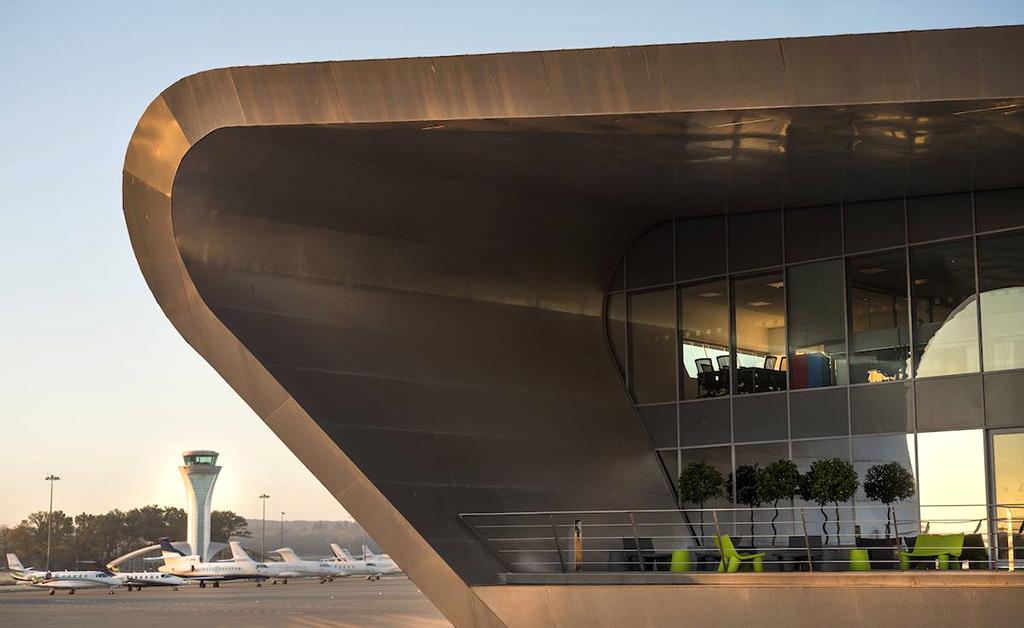 Several lounges and conference and meeting rooms are scattered throughout the terminal building, which opened in 2006. Windows overlook the apron, taxiway and general airport environs, and there is outdoor seating on a large two-story balcony. 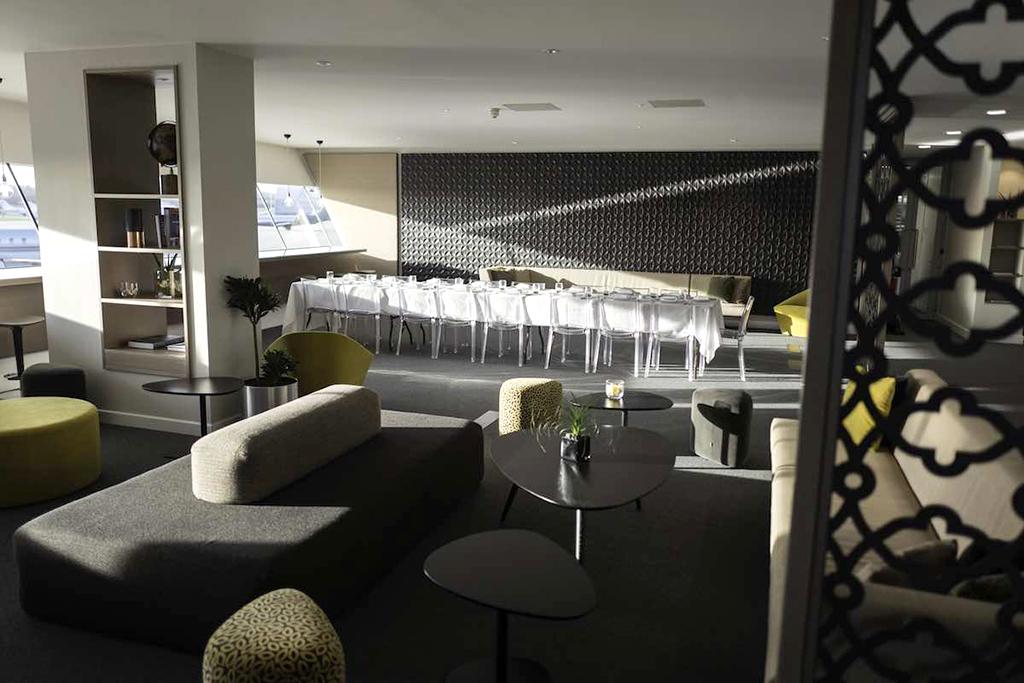 The lounge on what the English call the first floor (one flight upstairs) at the east end of the terminal. In this image, a table is set for a formal meal. The space is often used to host events run by customer companies and on behalf of the airport itself. 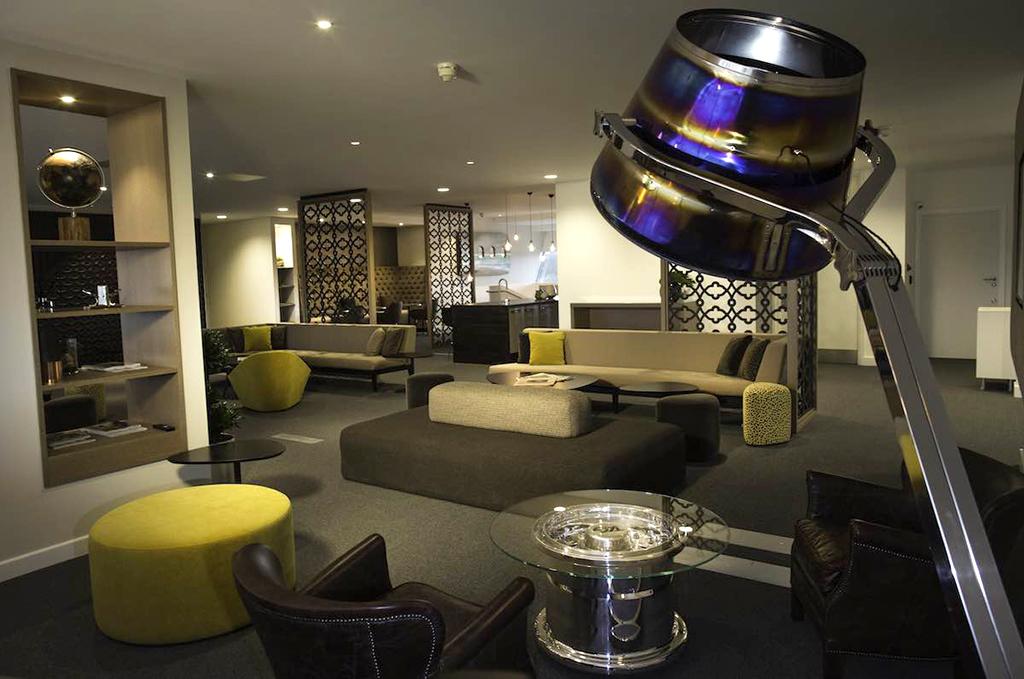 Detailing and furniture in the upstairs lounge reflects the overall theme and operational utility of the building. 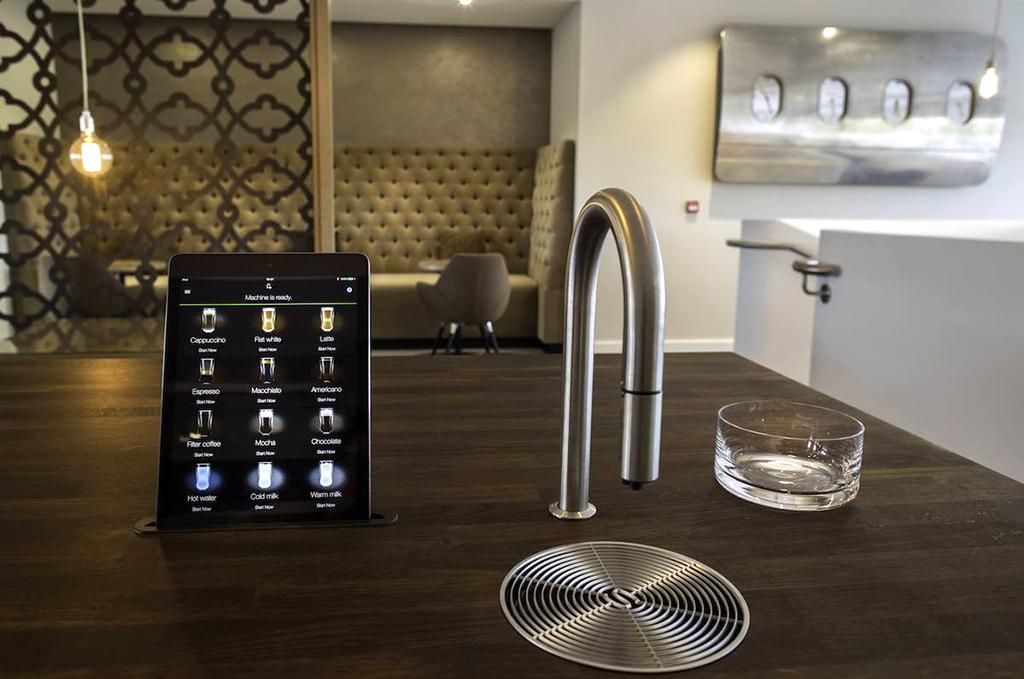 Coffee is made using a touchscreen interface and a fixed tap. Note the fuselage-section sculpture hanging on the wall above the staircase (right). 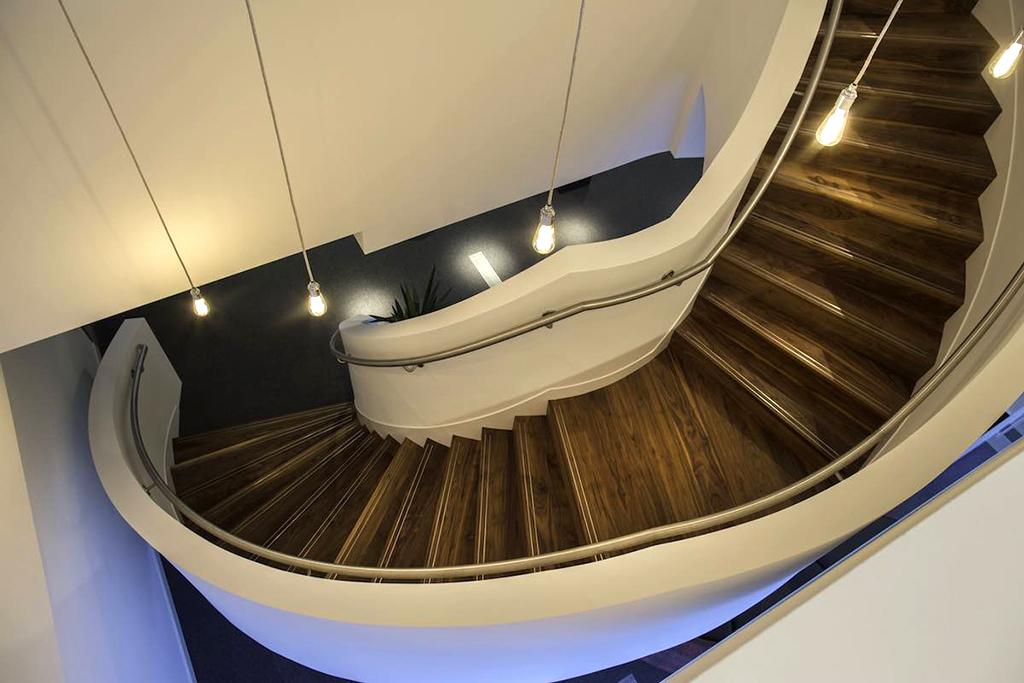 This staircase connects the ground floor with the upper lounge. Staircases were a big part of 3DReid’s design. 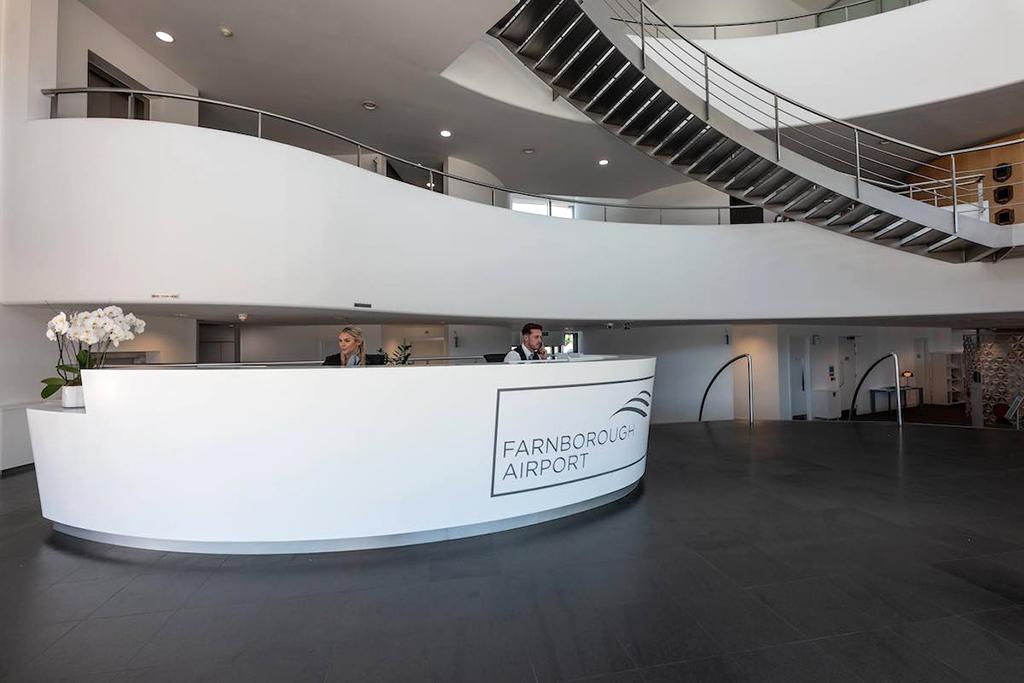 The central atrium of the terminal made up of a series of staircases amid curved white walls, metal balustrades and facing floor-to-ceiling windows look out onto the apron and the runway beyond. If there are echoes of Frank Lloyd Wright’s design of the Solomon R Guggenheim Museum in New York, this is surely no accident: the combination of a modernist aesthetic with flowing, natural curves is suggestively aerodynamic, and conveys modernity while recalling elements of aviation’s between-the-wars golden age. 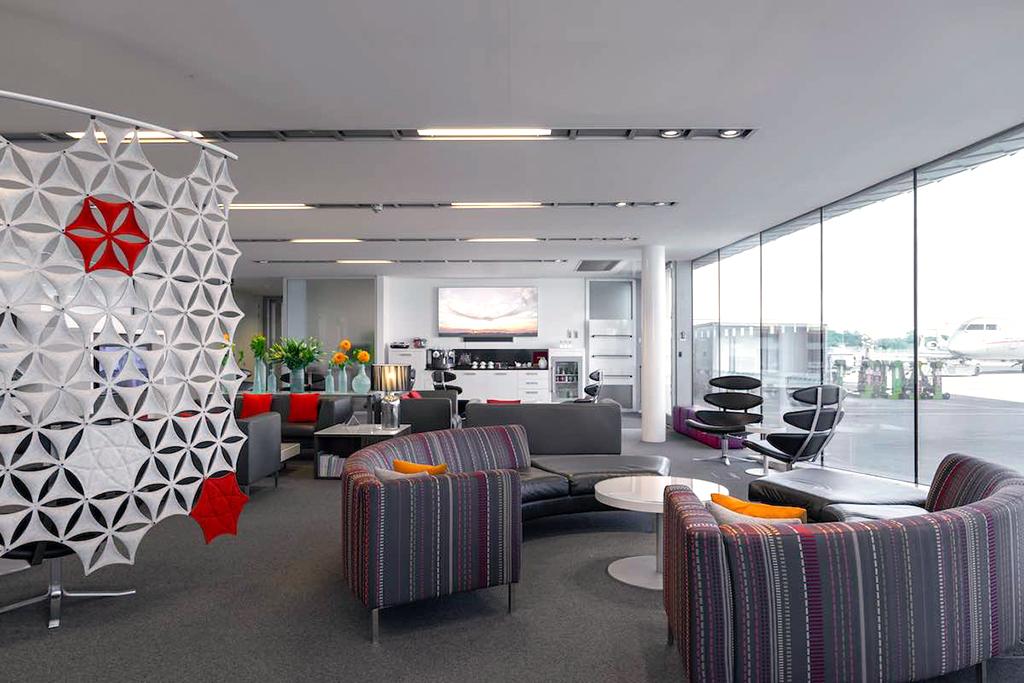 This ground-floor lounge is the one most business travelers will experience when using Farnborough’s terminal. It is a few seconds’ walk from the terminal entrance, and access to airside is through a door behind the wall where the flat-screen TV is fitted. 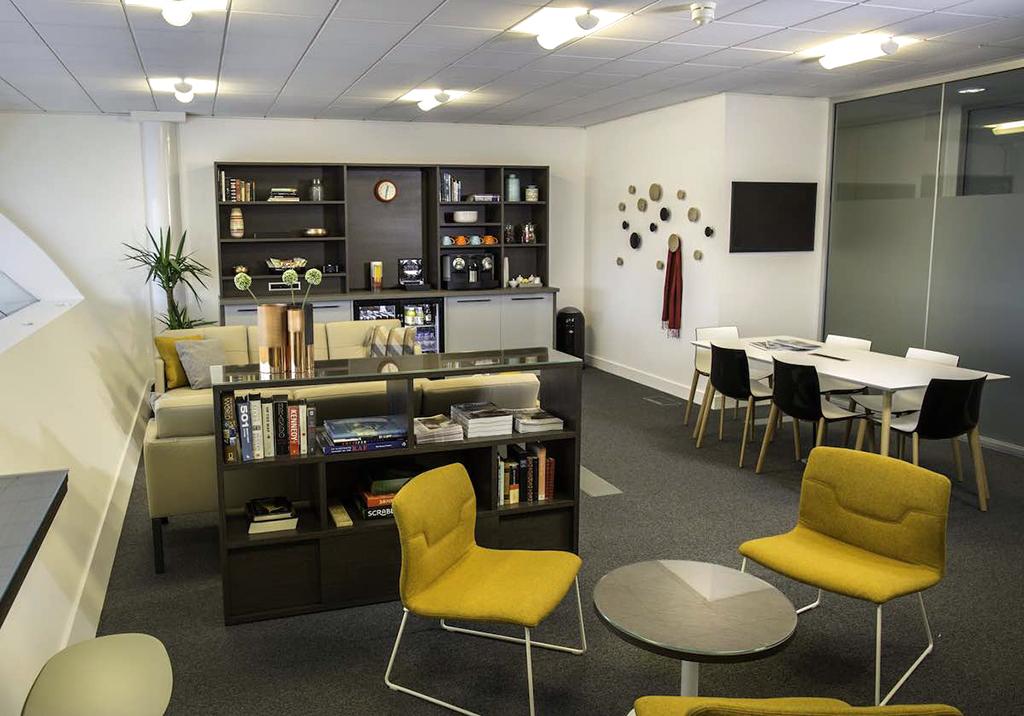 While the emphasis is on visitor amenities, Farnborough Airport has also made considerable provision for crews. Indeed, the airport sees this as a key point of differentiation and one that gives them a competitive advantage. There are a number of options for business travelers wanting to fly in to or out of the London region, but, says airport CEO Simon Geere, “if the crew like to come to your airport, you’re more likely to get that business.” This is one of the lounges specifically for crews in the terminal building. 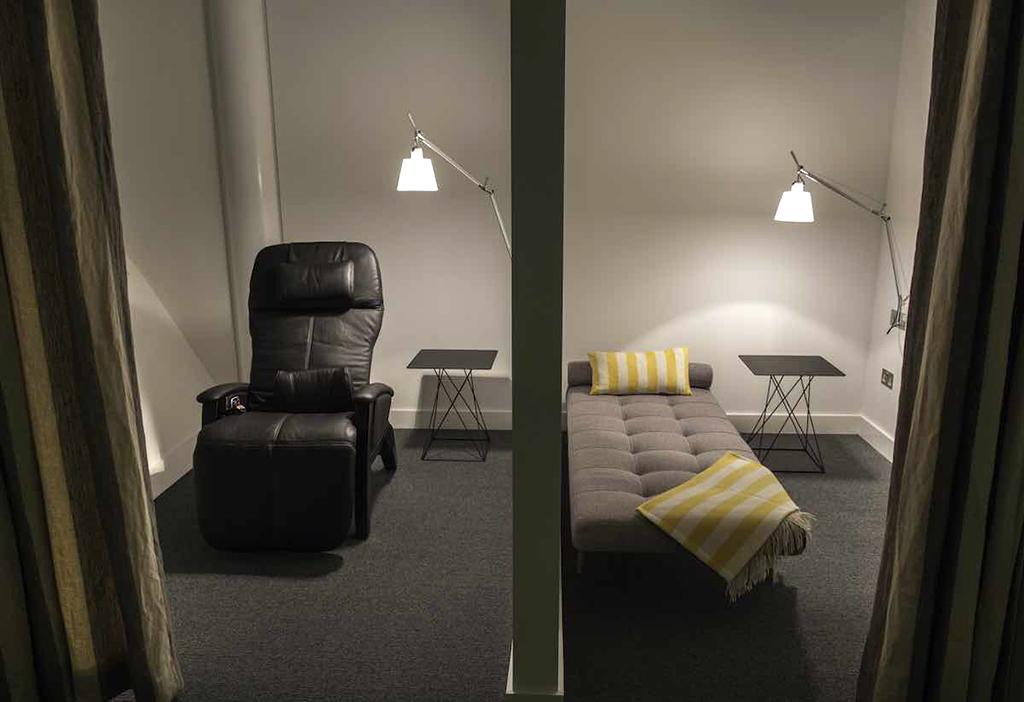 This crew rest area is in the main terminal building. Except when unoccupied and being photographed, lighting is kept very low. 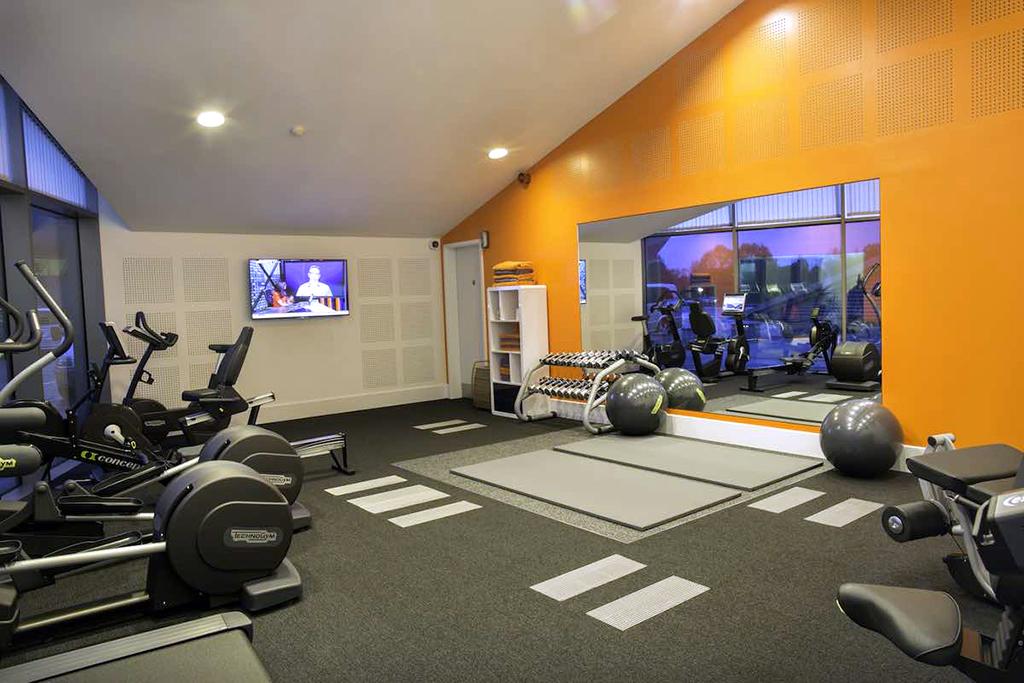 Rather than sleep, some crews may wish to move muscles that haven’t had much opportunity to be flexed during long flights. This crew gym is inside the Hangar 1 building, but adjacent to the terminal. 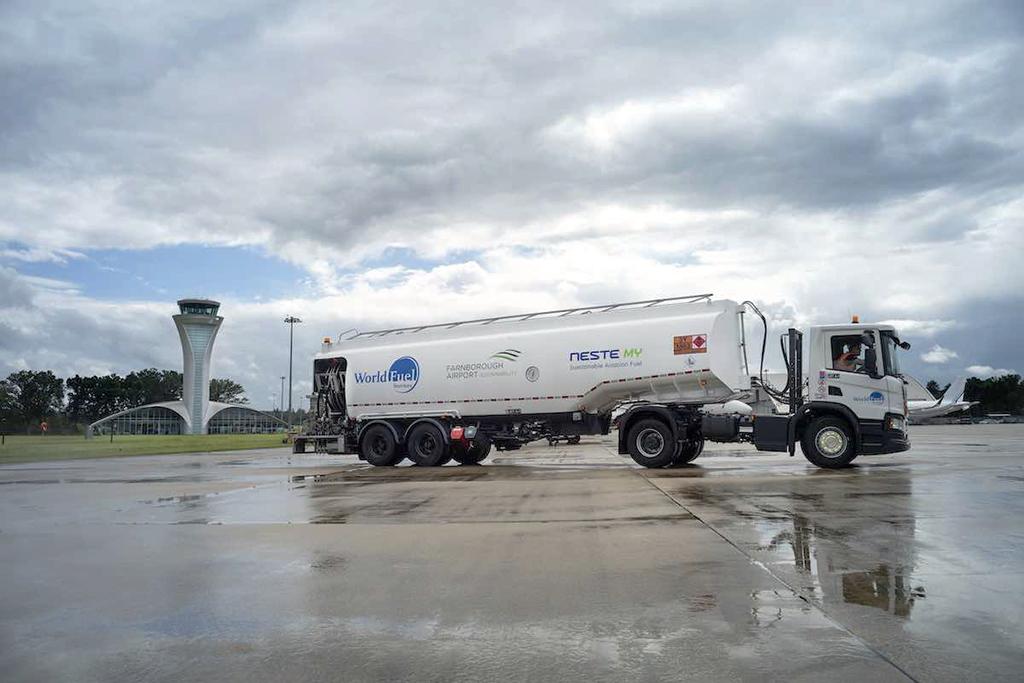 In 2018, Farnborough was accredited as carbon-neutral by Airports Council International Europe, making it the first business-aviation airport in the world to achieve this status. Its ground-vehicle fleet is electrically powered and there are a number of EV charging stations in the car park outside the terminal. As far as flying is concerned, Farnborough has been offering sustainable aviation fuel, supplied by World Fuel Services under a partnership with Neste, since the summer of 2021, though volumes are not high. Geere believes this is largely a consequence of the cost of SAF - presently, he says, JetA1 is about 75% of the price of SAF - and that different decision makers (aircraft owners; aircraft operators; the flying passenger customer) will have each likely made carbon-offsetting arrangements separately and thus may prove resistant when it comes to paying the extra cost. “Over time, we all think that SAF will become mainstream, and that SAF availability will improve,” he says.

More than two decades after the project’s inception and exactly 20 years since the first of its new buildings was opened, Farnborough Airport’s FBO, hangars and tower are established icons of private aviation design.

The scheme, commissioned from architects 3DReid in 2000, won the southern region award from the Royal Institute of British Architects in 2006. Perhaps a more eloquent testament to its success is how it has continued to influence new buildings in the area, such as in Gulfstream’s center, opened on an adjacent site in 2021, which took its cue from the main site’s curves and metallic elements - and in how the buildings continue to work well for airport staff and visitors almost a quarter of a century after they were first conceiv