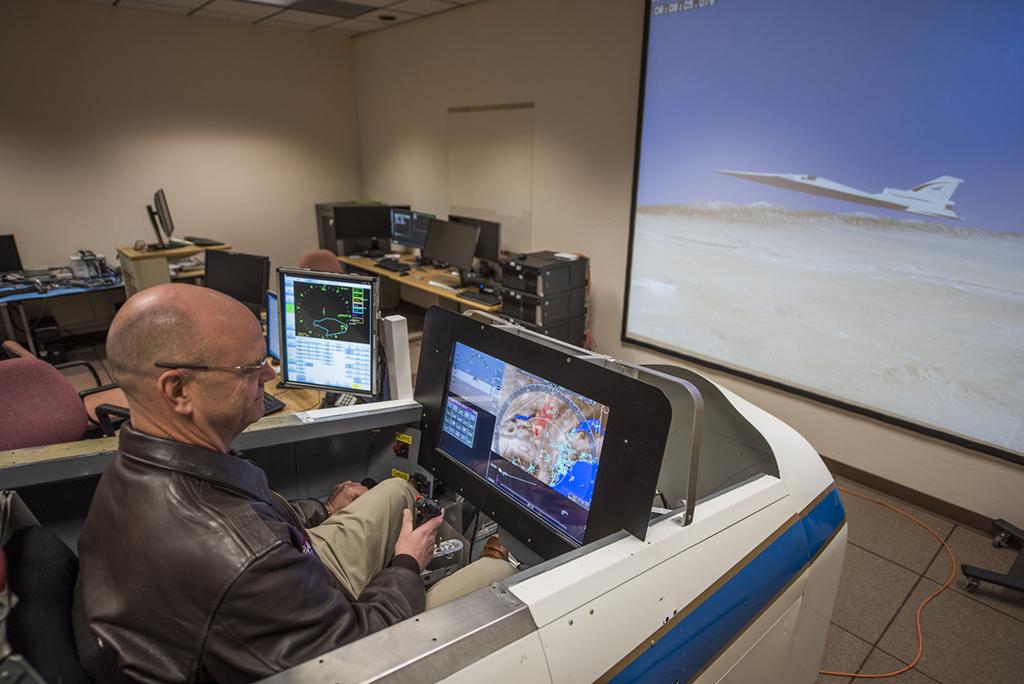 NASA test pilot Nils Larson flies the X-59 simulator.  As many as five NASA test pilots will fly the actual aircraft at 55,000 ft. over communities to test the sound waves on the ground.  The aircraft will be flown for test points on autopilot with altitude and speed hold engaged. The X-59 is a Mach 2.5 design limit aircraft that will fly test points at Mach 1.4 at 55,000 ft.  In this sense, it is more like a business jet and it is not designed for high G maneuvering. NASA photo Lauren Hughes 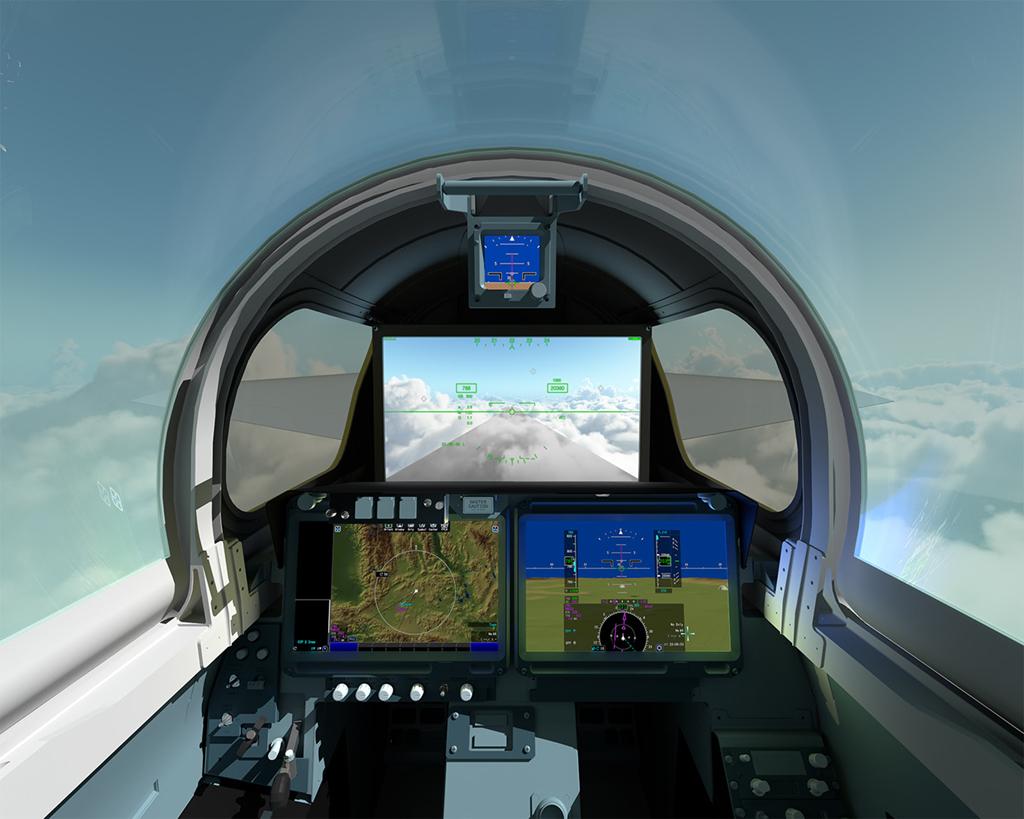 The X-59 QueSST (Quiet SuperSonic Technology) cockpit will have a 24-in. diagonal eXternal Vision System main display showing a stitched together image of the view ahead from two cameras. A color camera in front of the cockpit has 3,840-by-2160-pixel resolution. A monochrome camera deployed below the fuselage for takeoff and landing provides lower-resolution, visible and infrared imagery. The composite view is as if the elongated X-59 nose is not blocking the pilot's view ahead.  Collins adapted its two-man cockpit Pro Line Fusion for single-pilot supersonic operation. The two small forward facing windows have views blocked by canards. The cockpit is not aimed at any specific airline or business jet design but suggests closed cockpits are possible. This could be a fully enclosed military cockpit or a civil aircraft with pilots in the back and passengers with a front row seat and view out from where the cockpit used to be. Image credit: NASA 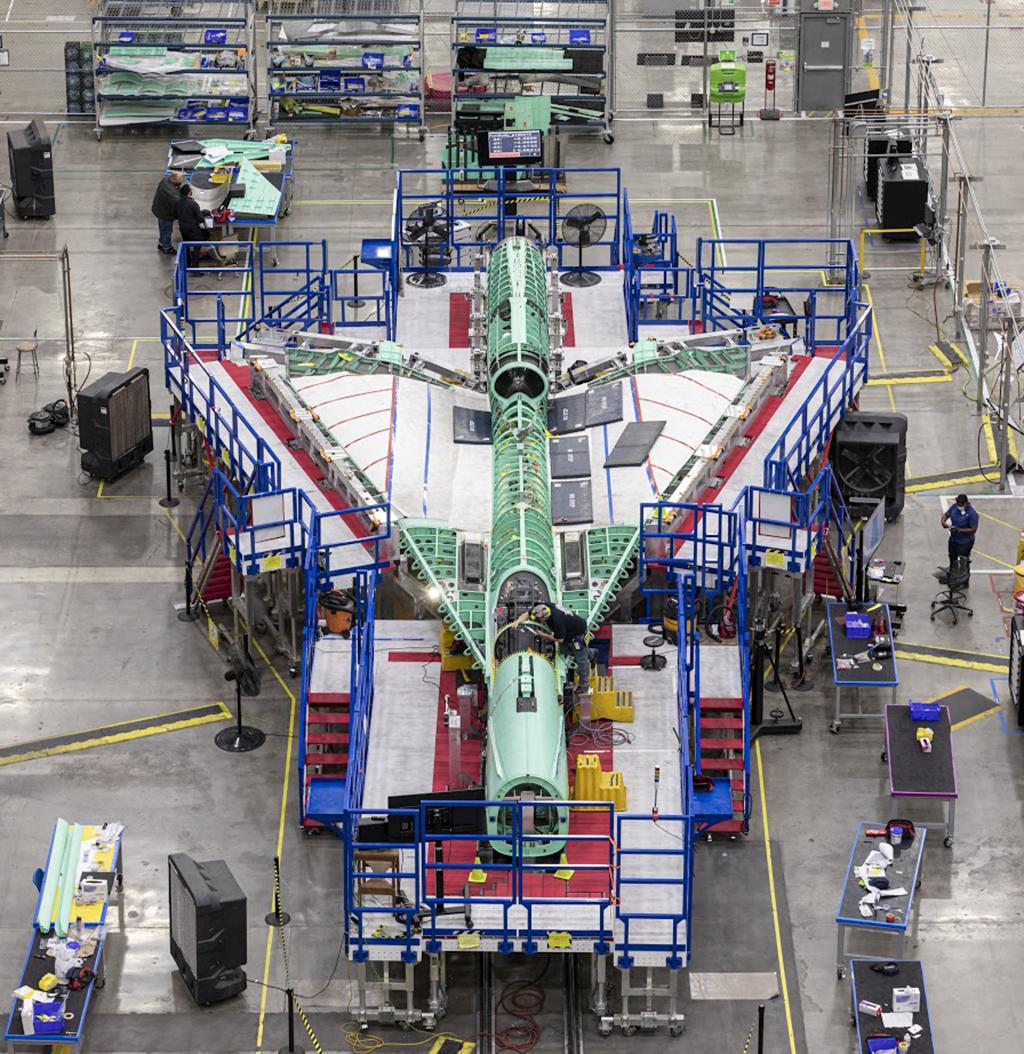 The NASA X-59 is kluged together from existing aircraft to provide an affordable experimental aircraft that can create a low sonic boom. It will create a shock wave that sounds more like a thump than a boom when it hits the ground like the sound of a car door being slammed in a parking lot. Observers on the ground will be paid small sums to record their perceptions of the noise and an array of noise monitors will measure the actual sound. The plane will fly over 4 to 6 communities at Mach 1.4 at 55,000 ft. in 2024-26. A subsequent report to ICAO in 2027 will show how much or little residents were annoyed by the sounds they heard. Image credit: NASA 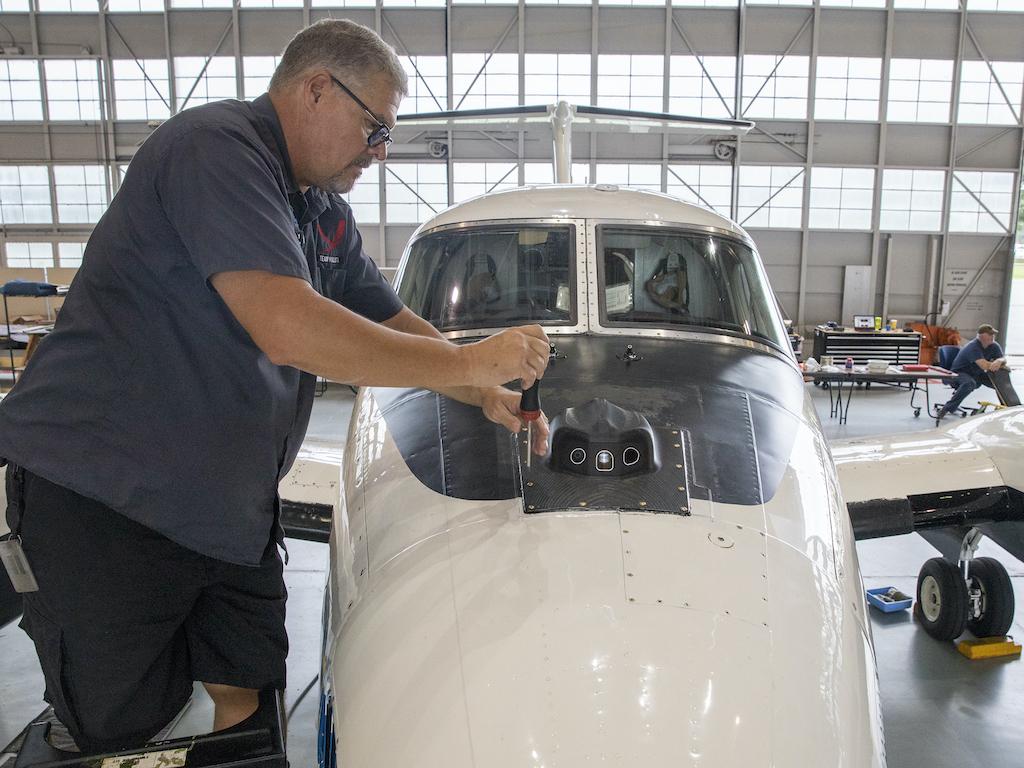 Avionics companies are expected to find the use of the X-59 eXternal Vision System interesting for future cockpit design projects. The XVS 4K camera designed by NASA is mounted just ahead of the cockpit on the X-59 and was flight tested on a NASA Beechcraft King Air /UC-12B.The X-59 itself is under construction now by Lockheed Martin at the company's Skunk Works in Palmdale, California. Image credit: NASA 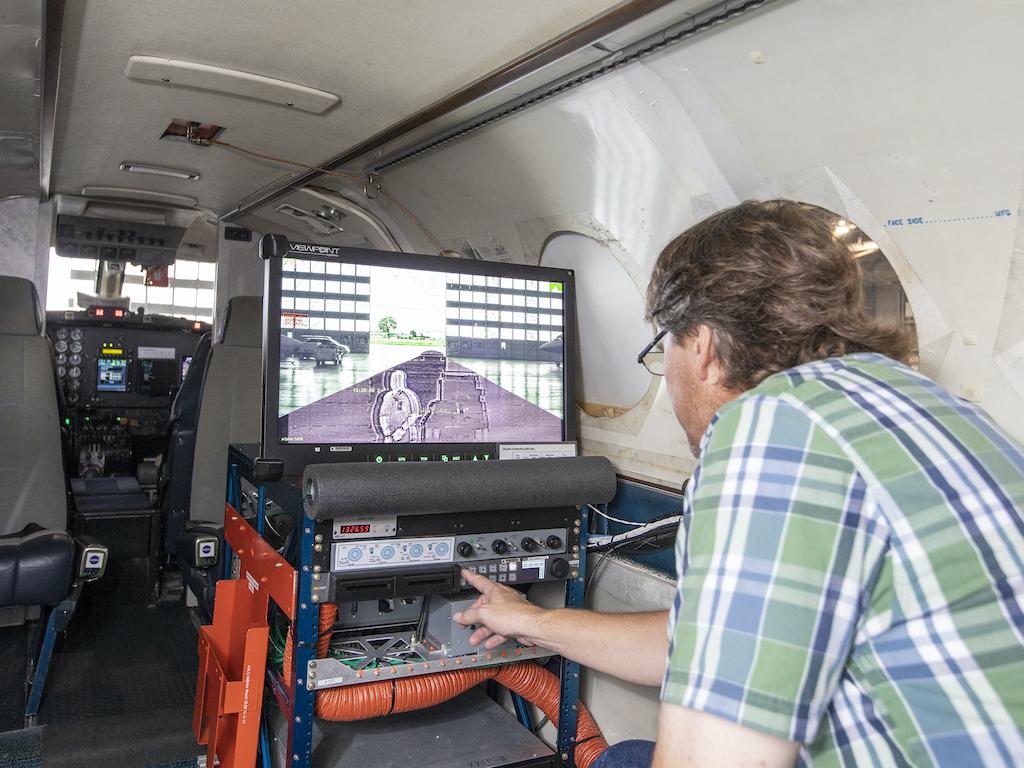 In the King Air tests, NASA engineers said it was hard for pilots to tell the difference between the camera view and the view from the cockpit out the windscreen with the naked eye.  “The best we have been able to tell from reports so far is that the camera is pretty much as good as the pilot’s eyes,” said Nils Larson, NASA’s lead test pilot on the X-59.  Image credit: NASA 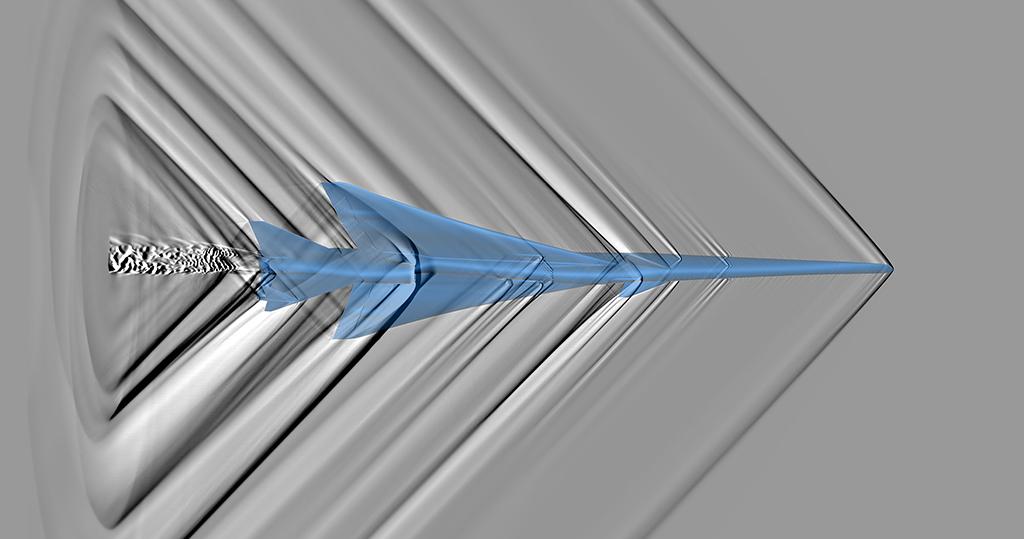 A complex 3-D computer simulation visualized these X-59 supersonic shockwaves. This is a computational schlieren image (a visual process for showing fluid flow created by a German physicist). It shows results from an aircraft shape aimed at creating a thump not a boom on the ground. NASA engineers used three supercomputers at its Ames Research Center in California for this study. Significantly weaker shocks propagate below the aircraft showing the results are as desired.  Credit: NASA/Marian Nemec and Michael Aftosmis 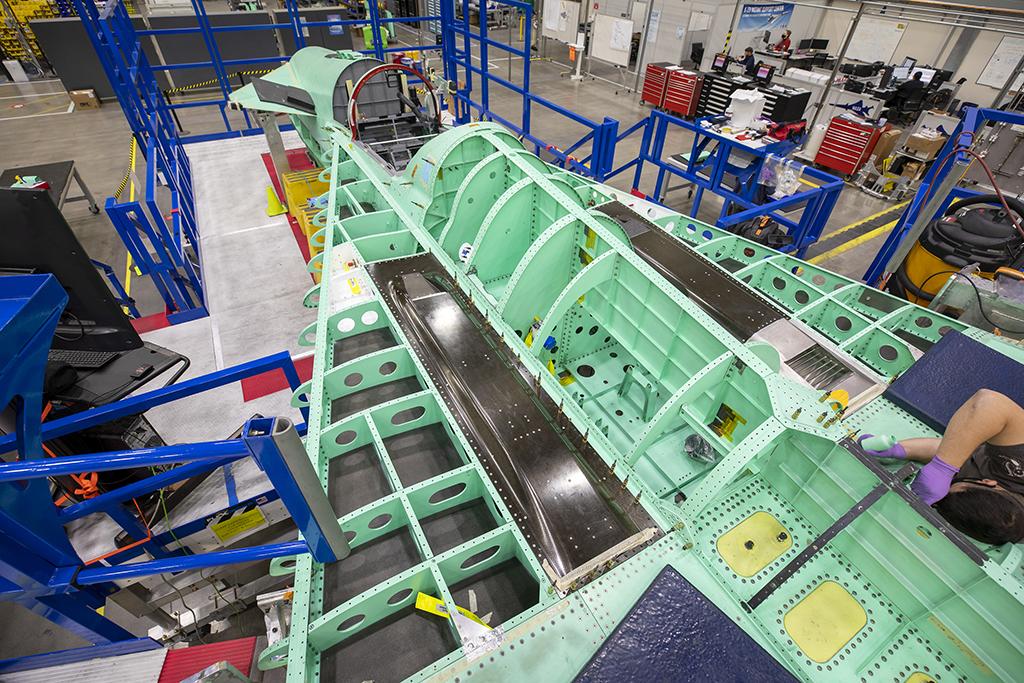 Lockheed Martin is assembling the X-59 for NASA at the company's Skunk Works in Palmdale, California. The aircraft is being engineered to create a sonic thump instead of a boom so NASA researchers can test fly it over communities to examine how this level of sound is perceived on the ground. The air intakes for the environmental control system (ECS) and the exhausts (see black areas on left and right wing)  traditionally found on the underside of an aircraft will be on top of the X-59 wing. This will prevent ECS exhaust from interacting with the shock waves on the bottom of the aircraft. This allows NASA to reshape the shock wave pattern to produce a thump not a boom.  Image credit: Lockheed Martin 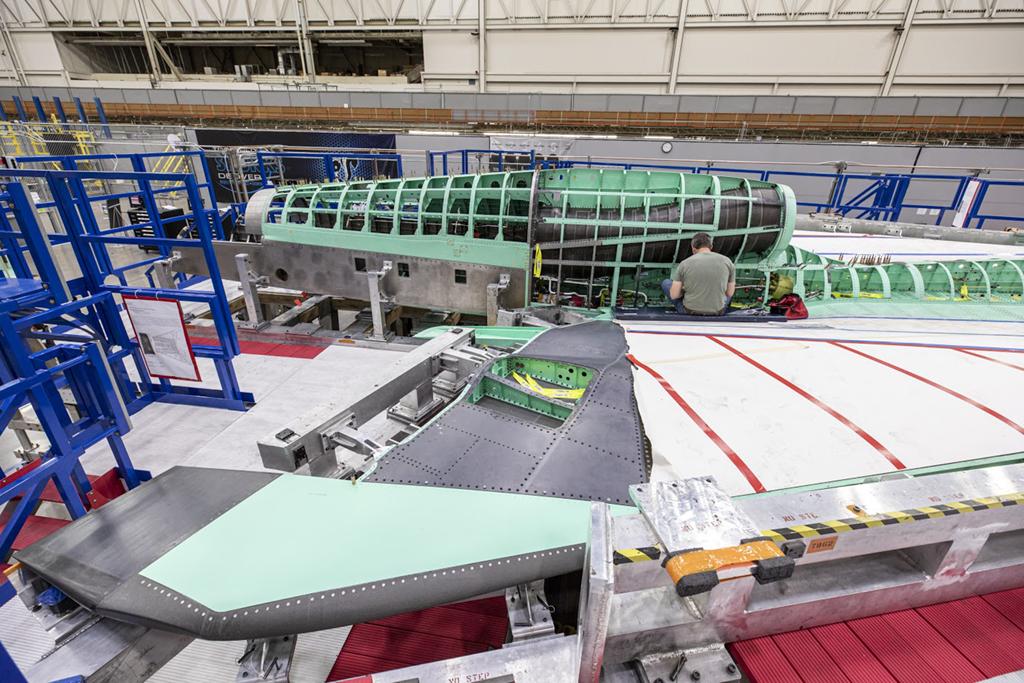 The X-59 is assembled using components from other aircraft to create an affordable X-plane.  It has a single F414-GE-100 afterburning engine, an F-16 landing gear, an aft cockpit and ejection seat from a T-38 training aircraft and additional parts borrowed from other aircraft. The overall project, including construction of the aircraft and flight testing, will cost about $576 million over six years, says NASA.  The elongated nose and the mounting of the environmental control system intake and exhaust above rather than below the wing create a sonic thump not a boom on the ground.  “And if the sound is smooth that means it is less annoying to people,” said Alexandra Loubeau, the NASA flight vehicle acoustics engineer on the X-59 project. NASA expects Lockheed Martin to wrap up the assembly of the X-59 at the Skunk Works so major ground testing can begin in the Northern Hemisphere summer with first flight targeted for the summer of 2022. Image credit: Lockheed Martin 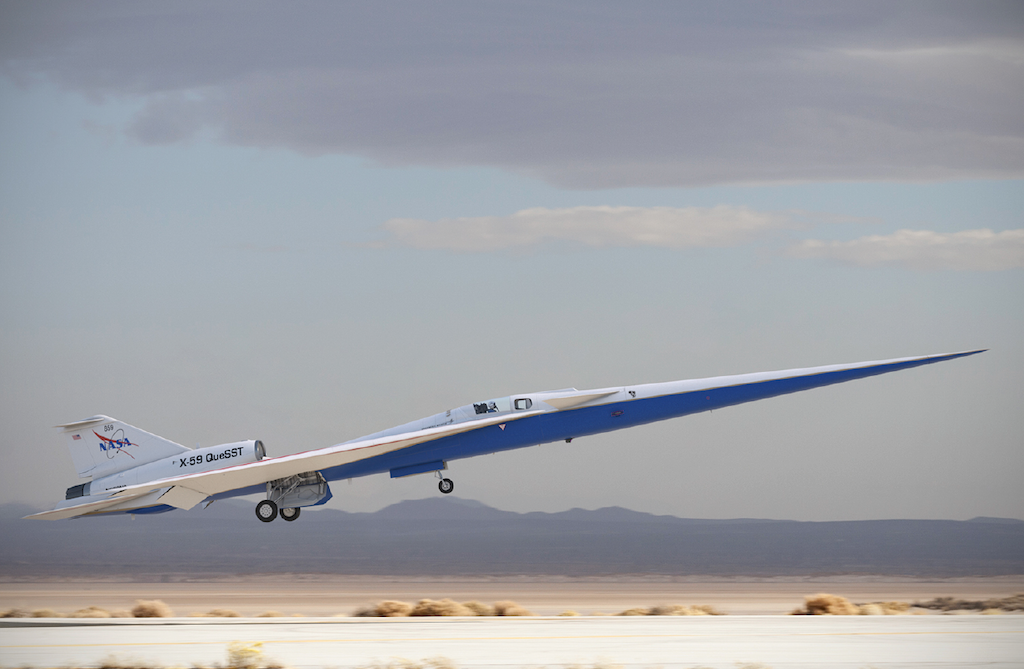 After flying over communities in 2024-26 a final report will be sent to ICAO, the FAA and other regulator agencies in 2027. This report will help them determine if it will be possible to allow supersonic aircraft to fly over land at Mach 1 and above.  The British/French Concorde used a drooped nose to allow pilots to see the runway during landing and taxi but that added parasitic weight to the design. The X-59 shape with its elongated nose is designed to create a low sonic boom and an eXternal Vision System uses cameras to allow a pilot to see ahead as if the nose was not in the way.  Image credit Lockheed Martin 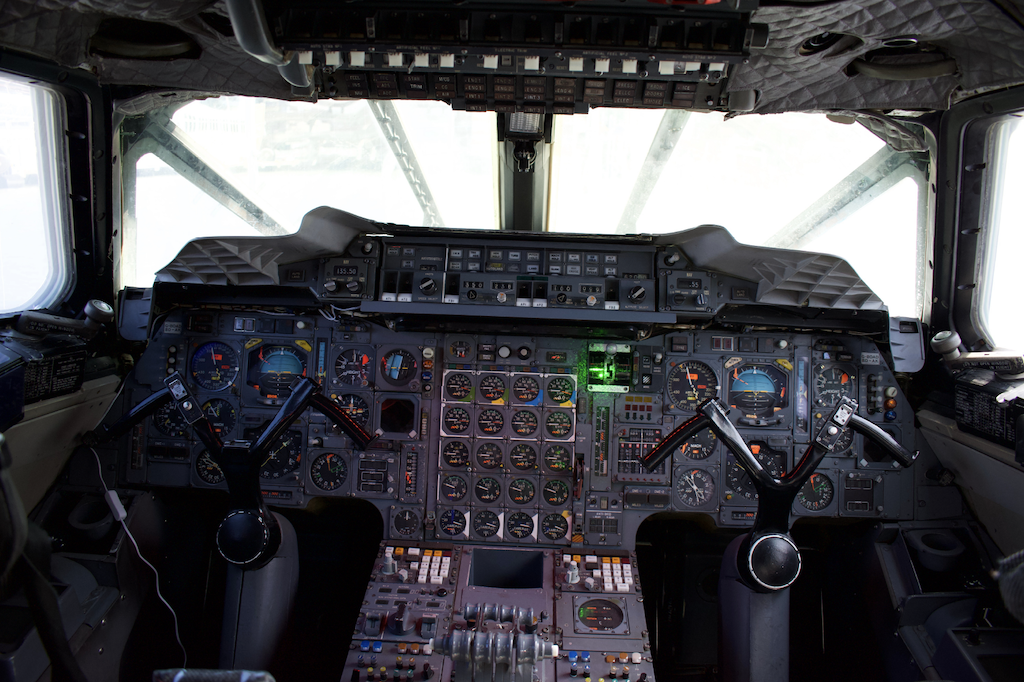 The X-59 cockpit represents a huge advancement to the round dial cockpit of the British/French Concorde that used instruments common in the 1960s when the aircraft was designed a half century ago. Concorde pilots could see out a windscreen to land and taxi due to a nose that could be drooped down then raised for supersonic cruise operations.  Photo Credit Shutterstock

NASA’s concept for the X-59 supersonic aircraft’s cockpit will involve a display showing images stitched together from cameras, which could allow pilots to sit at the back of the aircraft.