A successful multi-state flooring business combined with a passion for flying led Addison, Texas, couple Michael and Debbi Rasa to ownership of a procession of piston-, turboprop- and jet-powered business aircraft, culminating with a HondaJet Elite in September 2020, the couple’s second HondaJet. Altogether, they’ve owned 10 airplanes, eight of them jets: a Piper PA32, Beech Bonanza and King Airs 90 and 300, Dassault Falcons 10 and 20, Cessna Citations CJ3 and Mustang, and the two HondaJets, a legacy and Elite (SN 190).

“We’ve logged only 75 hr. on it so far due to the pandemic,” says Michael Rasa. “With the classic, we flew 300 hr. a year for a total of 750 hr. on the airframe and engines.” The Elite’s operating cost is running $750/hr. for a combination of business and pleasure flying, of which the latter amounts to 80%. “We have 11 locations in our flooring business distributed among Texas, Oklahoma and Louisiana,” he explains. “And we have family all over the country and fly to a number of destinations between the coasts.” The operators’ average flight for business purposes varies between 600-900 nm. “We fly more than we drive,” Debbie Rasa says. She holds a Commercial Pilot Certificate, while Michael is ATP-rated. Both hold multiple type ratings.

In terms of “likes,” for Debbie, it is ease of flight; for Michael, it’s reliability. “We can get into the plane, push the battery button and be taxiing in 5 min.,” he says. “The reliability is outstanding--very rarely have we had anything happen. You can climb to FL 430 in 38 min., and once there, it burns 86 gph or 560 lb./hr. It’s the only aircraft in its class that has the closed lav.”

He also likes the automation: “The plane is extraordinarily automated. There are zero runway items on this aircraft. When you rotate, it checks trim to ensure it’s in the right position. When you bring the gear up, it automatically engages the yaw damper and turns off the taxi lights and turns on the recognition lights, then at 18,000 ft. the recog lights go off. It’s all very intuitive.”

“The Elite is what the first plane should have been,” Debbie says.

“It is better because of the upgrades. They tightened up the braking system and listened to what their customers wanted--for example, a belted lav to accommodate an extra passenger, a better sound system and increased luggage capacity. And they widened the tail to reduce the runway takeoff and landing distance.”

As an example of the automation incorporated into the Elite that aids the cockpit, Michael cites the updated Garmin 3000 system, which features a cruise speed control (CSC) for holding speed and altitude. He describes it as “a poor man’s autothrottle that allows you to hold your speed and altitude in level flight and makes it easier to fly the aircraft. You can see the N1 going up or down, but the thrust levers do not move.”

Michael would rate all systems in the aircraft except the fuel system a 10. He gave it a nine, due to the challenges implicit in topping off the tanks (a common complaint on the HondaJet Owners and Pilots Association website). Making it a little easier in the Elite is the new flow-warning indicator next to the fueling port, which he describes as “giving you a white light that says ‘fuel’ and a yellow light that says ‘fuel slowing,’ so the linesman can adjust the flow accordingly. The legacy did not have this. Now that we use that, we have not had any fuel blowback. It shows attention to detail on the part of Honda.”

Since the Rasas had owned an earlier HondaJet model, Michael was able to appreciate the acoustic treatment Honda has applied to the Elite. “It has made the engines even quieter,” he says. “With the power they develop, we climb out at 4,000 fpm--like a rocket ship.”

The Rasas also give high marks to the HondaJet organization. “Everyone we came into contact with we loved,” Debbie says. “They listened and treated us with respect.” 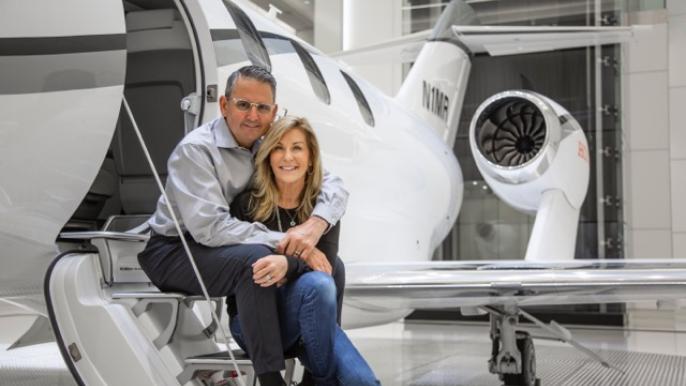 Words From the Fleet Leader

If you want to know how the HondaJet holds up under extended use, ask anyone from Jet It. The fractional ownership and charter operation was launched in 2018 by former Honda executives Glenn Gonzales and Vishal Hiremath and organized exclusively around a fleet of HondaJets, currently one legacy aircraft and nine Elites. No business aviation operation can flog aircraft like fractional/charter programs, and Jet It is understandably the HondaJet fleet leader in terms of operating hours accrued.

“Jet It is a shares-based ownership operation carried out under Part 91K with one-tenth to one-half share purchases,” William Collier, vice president, operations of the Greensboro, North Carolina-based company, explains. Jet It is privately owned and not affiliated with Honda Aircraft. “We are operating each aircraft between 800-1,000 hr. a year, averaging 85-90 hr. per month including charters,” he continued. “So we have a Part 135 certificate, as well.” The bulk of the operation is in the Eastern U.S., but it is moving west.

To date, the company has signed more than 60 shareholders. Jet It charges owners $1,600/hr. for operations, and charter customers are charged $4,000/hr. As of mid-January, Jet It was negotiating with Honda Aircraft for 10 more Elites to support its expansion beyond the Eastern U.S. The company employs 32 pilots, with six in the pipeline, and a target of three PICs and one SIC for every aircraft. “By the end of the year, we will have about 80 pilots on line,” Collier said. “We are looking for both Part 91 and 135 experience to service the intimate environment we operate, in which crews have face-to-face contact with the owners. We are a service-oriented company.”

Pilots are trained at FlightSafety International and new hires complete an initial 25-hr. course under Part 91 with lead pilots where they also get company experience in terms of interfacing with customers. Some shareholders are also pilots who only fly under the supervision of company captains. “All [shareholder] flights are with a PIC and SIC; we only operate single-pilot on repositioning flights,” Collier said.

Dispatch reliability for the operation is running “well over 98%,” Collier claims. “We have a minimal number of cancellations as a result of a maintenance issue.” Where AOGs have occurred, Collier says Jet It has received “excellent support from the factory.” The fleet is enrolled in Honda’s Flight Ready program, and the operator coordinates all maintenance through the dealer network, which Collier described as “very responsive.” Honda’s infrastructure “is designed to support the fleet,” he says. “We will have some suggestions for them to make it even better to continue to grow our mutual brands.”

To exploit the Elite’s maximum range and minimize fuel stops, Jet It operates its HondaJets close to MTOW. “The reliability and design and performance are really very good,” Collier says. “We try to forecast the maintenance and plan for it and are not getting a lot of surprises. [The HondaJet] really is designed well and is very, very reliable. We are able to achieve our maintenance planning.”

One area needing improvement was tire wear, Collier says, “so they redesigned the gear and the angle of the camber of the wheels to achieve a more distributed tire wear, as the tires had been wearing on the insides. We also worked with the tire manufacturers for a better-performing tire. We are interested in optimizing the use of the aircraft.”

Jet It’s shareholders like the fit and finish of the interior and charter customers the roominess of the cabin and legroom, Collier relates. “Avionics are excellent--in the worst case, if you get a CAS message, you reboot it. The pilots like it because it is intuitive. All the other systems I would grade as ‘nines.’”

Debbie and Michael Rasa’s one complaint about the HondaJet is that “It’s not large enough for our full family. We are hopeful that, in the future, Honda will come up with something bigger. If they do that, we will be ecstatic to move into one.” (It’s rumored--and, yes, your mother taught you never to believe in rumors--that Honda Aircraft is working on a larger aircraft, perhaps to compete with Embraer offerings. When we asked a Honda executive if the rumors were true, his response was, “Well, have you seen our factory?” Yes, but only in pictures; however, the point is that capacity has been built into the Honda works to accommodate more than one aircraft production line.)

There is an urban legend that circulates throughout the larger Honda organization--the Japanese multinational conglomerate that manufactures motorcycles, cars, trucks, generators, and now aircraft and jet engines (the latter through Honda Aero Inc., which developed the HF120 in Japan before getting into bed with General Electric to certificate it with the FAA in the U.S.)--that when revered founder Soichiro Honda launched his post-World War II enterprise, he coined a mantra that every succeeding executive and manager took to heart: “First, two wheels, next four wheels, then three wheels.” In other words, “We begin with motorcycles, proceed to automobiles, and finally culminate with [tricycle landing gear] aircraft.” Mr. Honda died in 1991 at age 84, with motorcycles and cars in his portfolio but airplanes only a dream at the time. It took his successors to bring that dream to reality, and judging by the praise of contemporary HondaJet owners, the founder would have been proud.

It should be noted that while the safety record of the aircraft is generally positive, there have been three incidents of runway departures by HondaJets and one accident involving a nose-gear failure that resulted in a successful landing in which the aircraft slid nose-down to a safe stop on the runway. In all four cases, occupants of the involved aircraft were unharmed, and in the runway excursions, the HondaJets received minor damage.

The one occurrence classified as an accident took place on Oct. 7, 2019, at Charleston International Airport (KCHS) when the pilot of approaching HondaJet N166HJ received a warning that the nose gear had not locked into the extended position after a gear extension. Several attempts to lock the nose gear into position were made without success, and the ATP-rated pilot chose to land the aircraft on Runway 3 with only the main gear securely extended. The emergency landing was executed successfully, with the nose of the HondaJet scraping along the runway until the aircraft stopped. The pilot and four passengers exited the aircraft uninjured; later it was determined that the underside of the HondaJet’s nose had scraped completely through the hull, damaging the pressure vessel.

The three runway departures occurred, respectively, July 12, 2017, at Chicago Midway International Airport (KMDW); April 15, 2018, at Atlanta Peachtree DeKalb Airport (KPDK); April 17, 2018, at Harlan Municipal Airport (KHNR), Iowa; and Jan. 1, 2021, at East Texas Regional Airport (KGGG), Longview. In at least two of the cases, weather at the airports was rainy with gusty winds and a lot of water on the runways. In analyzing these incidents, it is important to consider the HondaJet’s 20-kt. crosswind limitation, cited earlier in this report by Russ McMillan and the admission by that highly experienced jet pilot that he had redirected two HondaJet flights from filed destinations due to weather conditions that would have exceeded the crosswind landing limitation.

A factor in at least two of the earlier excursions may have been a brake valve problem ultimately addressed by the FAA in airworthiness directive 2018-06-10 calling for replacement of faulty brake valves and extra attention to braking systems during pilot preflight inspections. The FAA focused on the aircraft’s brake system after reports of “unannunciated asymmetric braking” during runway rollouts. It is worth considering, too, an interview BCA conducted with the pilot of one of the aircraft that experienced a runway departure who essentially blamed himself for attempting a landing in adverse weather on a too-short runway for the prevailing conditions.

Editor's Note: As part of this operators' survey, David Esler evaluated the HondaJet Elite in this article and this one about single-pilot operations.