Cabin
According to the Brazilian National Civil Aviation Agency [Agencia Nacional de Aviacao Civil (ANAC)] type certificate data sheet (TCDS) that includes both the EMB-545 and EMB-550 types, the EMB-550 type has a maximum passenger capacity of 12, which matches the maximum passenger capacity advertised for the Praetor 600. Comparatively, Embraer promotes the Praetor 500 as having a nine-passenger maximum capacity, one less than the 10-passenger maximum certified capacity of the EMB-545 type. The respective cabin lengths of the Praetor 500 and 600 are 24 ft. and 27 ft. 6 in., with 150 ft.3 of baggage capacity available on the former airplane and 155 ft.3 of capacity on the latter airplane. Other cabin features include a flat-floor cabin that has a height of 6 ft. and a 5,800-ft. cabin altitude at the maximum operating altitude.

Despite any differences between the Praetor airframes, both the EMB-545 and EMB-550 types share several common operating limitations, including a 45,000-ft. maximum operating altitude and a maximum operating speed (MMO) of 0.83 Mach between 30,000 ft. and 45,000 ft. Performance figures that differ include the ranges of the Praetor 500 and 600, with the latter having 4,018-nm range based on that airframe’s long-range cruise speed, while carrying four passengers and with National Business Aviation Association (NBAA) instrument flight rules (IFR) reserves and a 200-nm alternate airport. Assuming the same criteria, the range of the Praetor 500 is 3,340 nm. In comparison to the Praetor 600, the Praetor 500 needs less distance for takeoff and landing, with a 4,222-ft. takeoff distance possible at the airframe’s maximum takeoff weight (MTOW), sea-level altitude and in standard conditions. The unfactored landing distance of that Praetor variant—which assumes NBAA IFR reserves, a landing weight with four 200-lb. passengers, sea-level altitude and in standard conditions—is 2,086 ft. Based on the same criteria, the takeoff distance and unfactored landing distance of the Praetor 600 are 4,717 ft. and 2,165 ft., respectively. 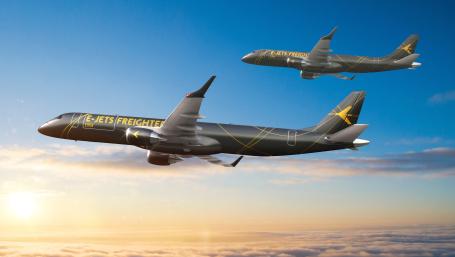 Embraer Seals First Freighter Conversion Deal
The order is for up to 10 aircraft for an undisclosed customer with the feedstock coming from the customer’s current E-Jet fleet.
Aviation Daily
Embraer Signs Launch Customer For E-Jets Cargo Conversion Program
Embraer is starting an E-Jet conversion program in response to the booming e-commerce market and the movement by logistics providers to decentralization warehouses.
Aviation Daily
Daily Memo: Embraer Turboprop Discussions Close In On Engines
Embraer’s preparations for the possible launch are focusing almost entirely on the selection of an engine manufacturer and the question to what extent the powerplant will include new technology.
Aviation Daily
Brazilian Air Force Cuts KC-390 Program By 25 Percent
The Brazilian Air Force said the planned purchase of 28 KC-390s exceeded “budget reality” as military budgets have been restricted.
Aerospace Daily & Defense Report
Embraer Sees Demand For 500 New E175s In North America
Embraer CEO Francisco Gomes Neto said that the E175’s status as the only scope-compliant large regional jet “still in production today” ensures it will continue to sell heavily to airlines in the U.S. over the next 10 years.
Aviation Daily
More Embraer resources