This Week In Aviation History: April 8 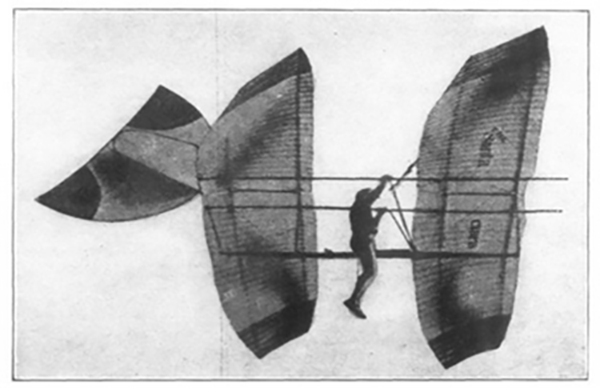 Among the pioneers of aeronautics who contrihuted their share to the realization of power flight there is one name which has nearly fallen into oblivion, that of Professor John J. Montgomery of Santa Clara College, Cal., whose investigations into the science of soaring flight and inherent stability deserve that his name be placed in the Annals of Aviation alongside with Lilienthal, Pilcher, Chanute and Ferber.

Attention has just been called to Montgomery's early work through an investigation made by Assistant Attorney General Huston Thompson and W. D. Eakin, who will defend the Government against the suit recently filed in the United States Court of Claims by the heirs of the last Montgomery. 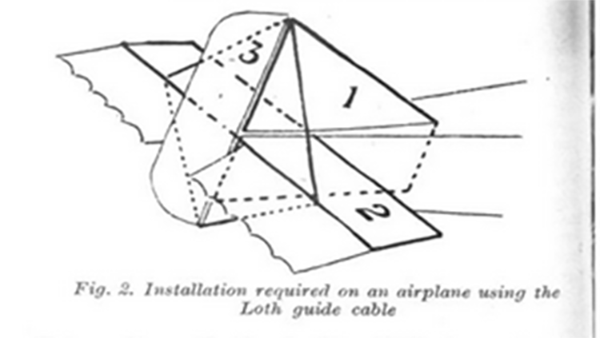 The Loth Guide Cable for Flying in Fog

Aviation Week & Space Technology 100+ Year Archive, April 10, 1922The Loth guide cable is an adaptation to aircraft use of the guiding device experimented with during the late war in some Allied ports for the purpose of directing ships during foggy weather. Its adaptation to aircraft was made by Lieut. Arthur W. Loth, an engineer officer of the French navy, who had previously perfected the ship guiding device for use in the French navy.

The fundamental principle of the loth guide cable rests on the fact that if a high-frequency alternating current is sent through a cable earthed at each end, a magnetic field of considerable intensity is created around the cable. The effects of this field can be detected by means of suitable instruments at considerable distances from the cable. Thus if an aircraft is equipped withese instruments, its navigator can determine his position relatives to the cable, and thus ascertain his bearings.

Aviation Week & Space Technology 100+ Year Archives, April 1, 1938The Canadian aircraft industry is being groomed to become once again an important source of supply for Great Britain in case of a European war. Once before the mother country relied on Canada to supply the wings of war. During the World War hurriedly assembled airplane manufacturing plants at Toronto produced 2,900 two place fighters for European war zones. This summer practically every one of the 10 Canadian airplane manufacturing companies will be starting production of entire or parts of military airplanes for the British Air Ministry and the Royal Canadian Air Force.

In the summer of 1938 a British Air Mission toured Canada and conferred with aircraft manufacturers, financiers and the Canadian government. As a result initial orders have been placed with individual commpanies and with a specially formed syndicate for the production of fighting airplanes to ascertain how speedily the Canadian aircraft industry can build military machines. If production this year and next comes up to expectations, orders for more advanced airplanes are expected. 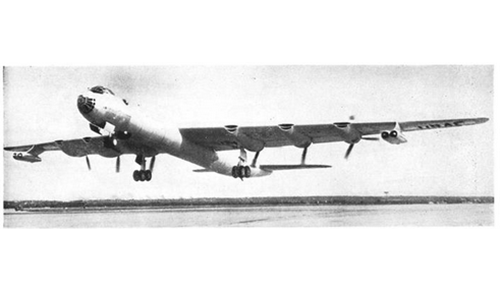 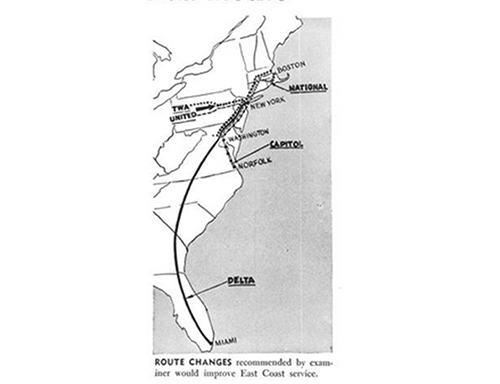 Delta Air Lines has been chosen to compete with Eastern Air Lines and National Airlines for traffic between the Northeast and Florida by Civil Aeronautics Board Examiner Thomas L. Wrenn in his report on the New York-Florida case.

Wrenn's report brings the proceeding-the fourth in a recent series of major route cases-into its final phase. He found ample evidence of the need for a third carrier on the East Coast route, and found Delta the most logical candidate. 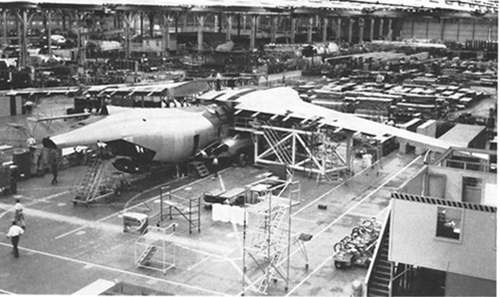 Relations among nations involved in international air transportation became chaotic last week as an open-rate situation appeared on Atlantic and Pacific routes and the new U.S. international policy for civil aviation again became bogged down at the White House.

As of late week, the bitter fare conflict has plunged the industry into wide-spread confusion, making it difficult to determine the exact stand each government was taking. This much was clear, however: the U.S. now is not facing the solid opposition it originally confronted. 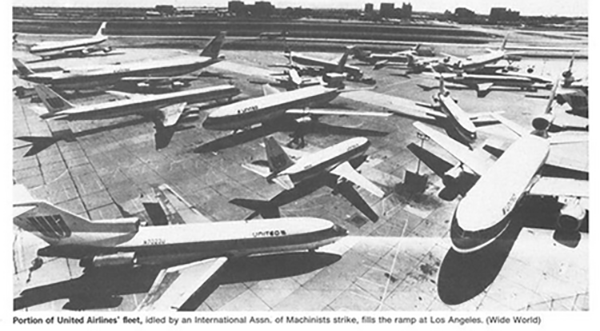 United Airlines was shut down last week by a strike of its 18,600 machinists, just as it had gained long-sought dominance in important U.S. markets.

Among these markets were New York-Chicago and Washington-Los Angeles, both of which United captured from American Airlines after a long struggle.

United also had established identity in growing markets like Orlando-Buffalo and Pittsburgh-Las Vegas, which the carrier obtained under the dormant authority provisions of the airline deregulation act. 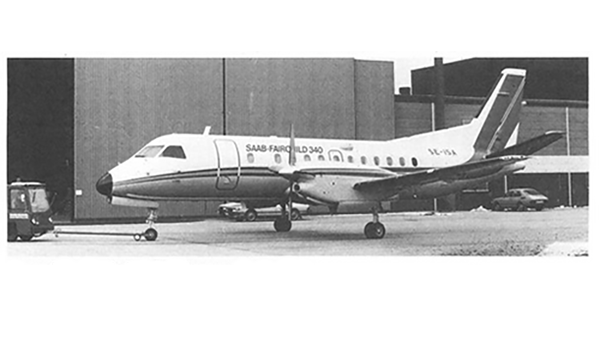 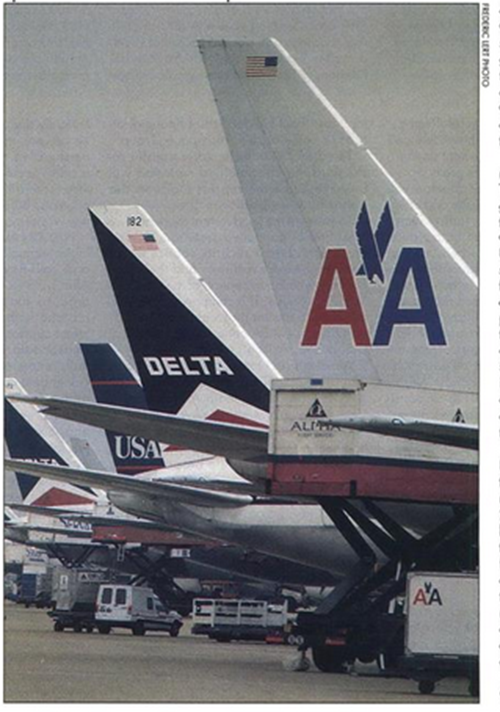 Paris' future as a major European hub is being threatened by the growing opposition of local residents, hasty political decisions to limit aircraft movements at Orly airport and a controversy tied to additional runways for Roissy-Charles de Gaulle.

The city-Europe's second biggest international hub behind London-is served by 142 carriers operating routes to 510 points in 135 countries. Combined traffic at Paris airports in 1994 increased by 7.3% to 55.3 millioin passengers. Cargo traffic soared 14.5% to 1.2 billion metric tons. And aircraft movements increased by 3.8% to 528,000.

Europe's skies could see an unprecedented mix and match of airlines, as acquisition offers emerge

In a sequence of events, several high-profiles takeover scenarios surfaced late last month: Texas Pacific Group is looking at acquiring Iberia, Spain's biggest airline, and this could be followed by Lufthansa or British Airways, which could join the bid or sell its existing stake. 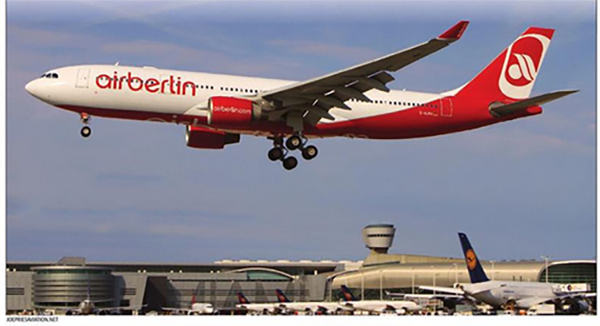 Etihad Airways has recently focused its acquisition activities on airlines in Europe. It holds stakes in Aer Lingus, Air Berlin, Darwin and Air Serbia and is exploring a major shareholding in Alitalia. Bu concerns voiced by the European Commission may slow down its progress

Take a trip back through time and learn about some of the key stories that faced the industry this week in history.

Subscribers can access all these articles and more in the Aviation Week & Space Technology 100+ years archive. Log in now.