The first 777, WA001, was unveiled in a lavish rollout ceremony on April 9, 1994, to the accompaniment of dry ice, lasers and rock and roll music. To accommodate the 100,000 workers and their families, the stage-managed event was repeated 15 times over the course of the day. 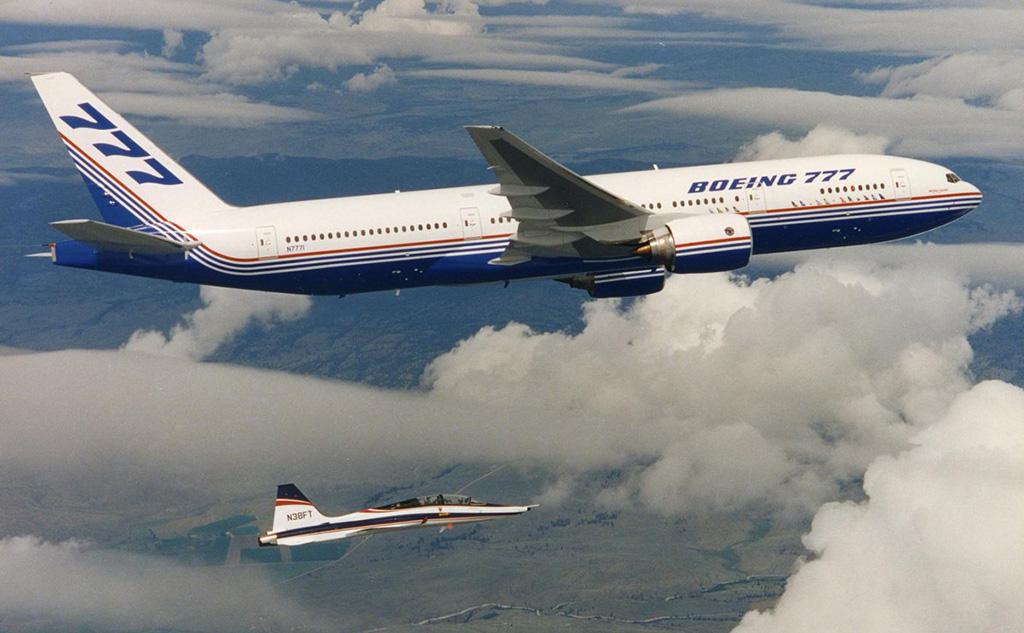 Following its initial flight, lasting 3 hr. 48 min. on June 12, 1994, WA001 became the bulwark of the test program, which would involve nine aircraft and three engine models. During its test program the aircraft encountered conditions not normally seen by production models, including one incident during early stall tests with flaps set at 30 deg., when WA001 rolled 110 deg. 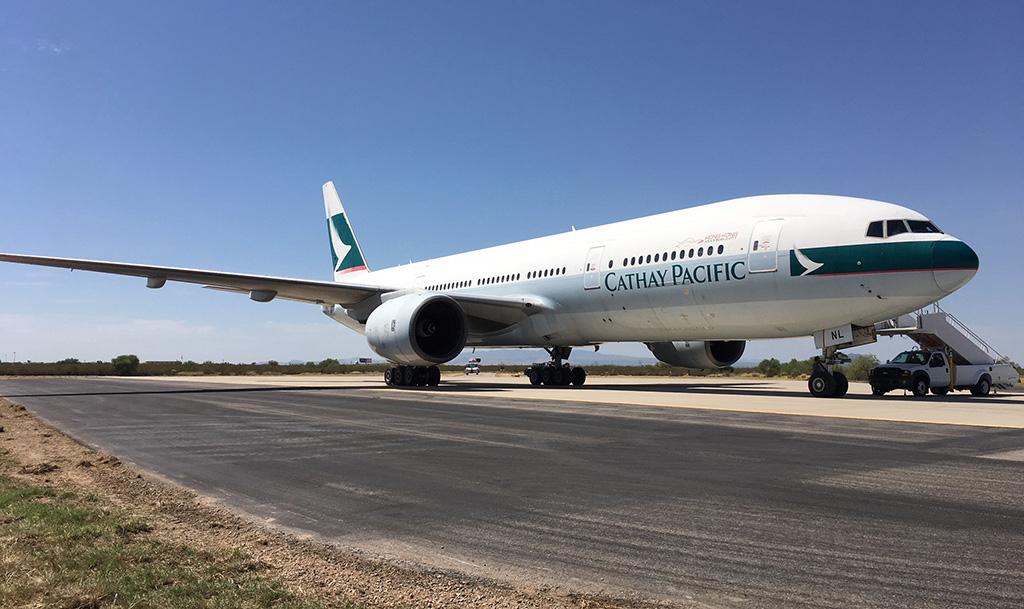 Following the end of 777-200 flight tests in the late 1990s, WA001 became surplus to requirements and was placed in storage at Everett. Boeing initially offered the prototype for conversion and sale as a business jet, but as there were no takers, it continued to market the jet to airlines while rejecting offers from scrap merchants. In 2000, Boeing eventually sold WA001 to Cathay Pacific, the Hong Kong-based carrier that influenced the 777’s wide fuselage cross-section design. 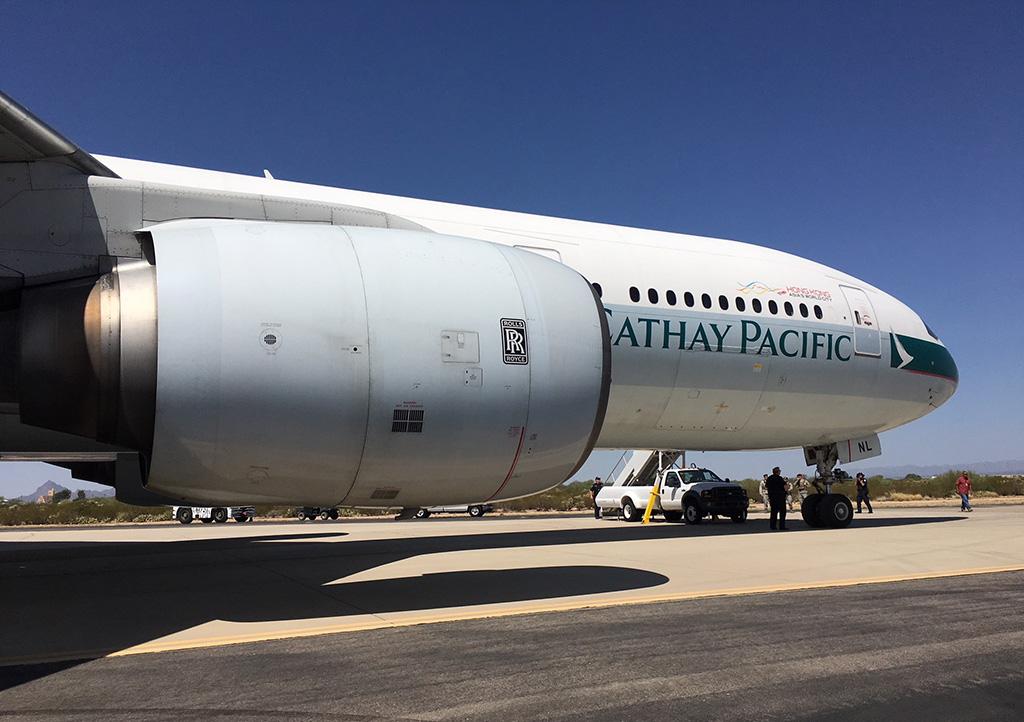 Carrying its Hong Kong registry identity, B-HNL, Cathay Pacific’s 777-200 was retired to the Pima Air & Space Museum in Tucson, Arizona on Sept. 18, after 18 years in service during which it amassed 20,519 flights and 49,687 hr. After its acquisition in 2000, the aircraft’s original Pratt & Whitney PW4084 engines were replaced by Rolls-Royce Trent 800s for compatibility with the Cathay fleet, making WA001 what is believed to be the only 777 to have flown with two different engine types. 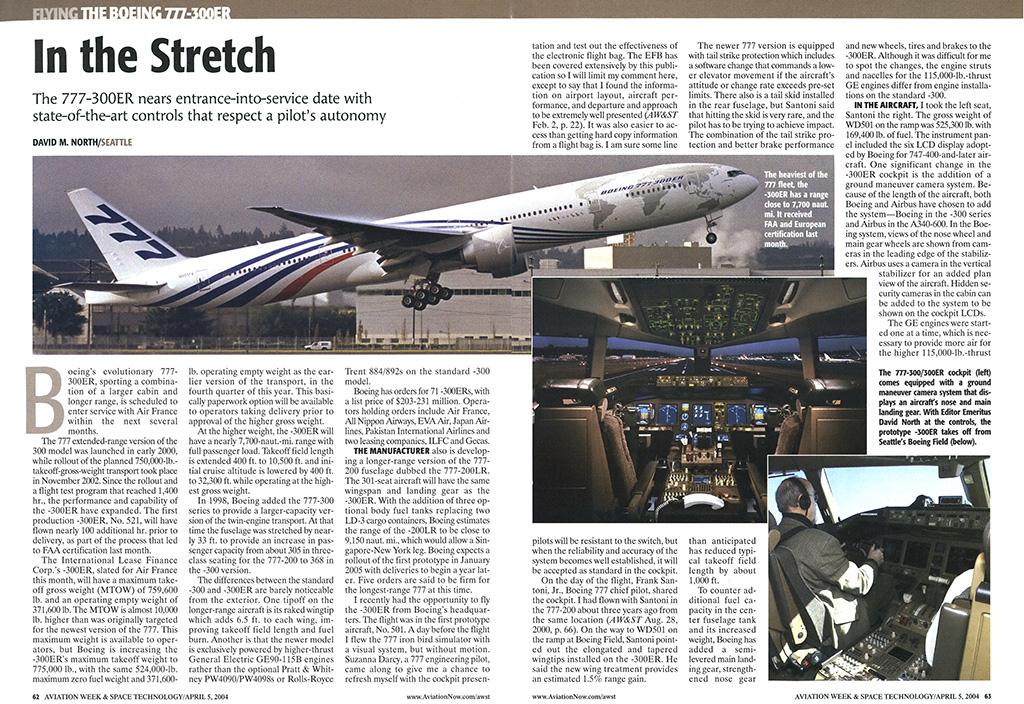 Linked to the development of General Electric’s more powerful GE90-110/115B turbofan, Boeing launched the 777-300ER, the first of a second-generation 777 family, in 2000.  Based on the extended fuselage of the baseline 777-300, the -300ER incorporated a strengthened structure, extended and raked wingtips and a modified main landing gear. The first 777-300ER was delivered to Air France in April 2004 and became a best-seller for the company, with almost 800 delivered through early October 2018. AW&ST's test pilot, then-Editor-in-Chief David M. North, flew the 777-300ER in the spring of 2004, and his pilot report appeared in the April 5, 2004, issue. 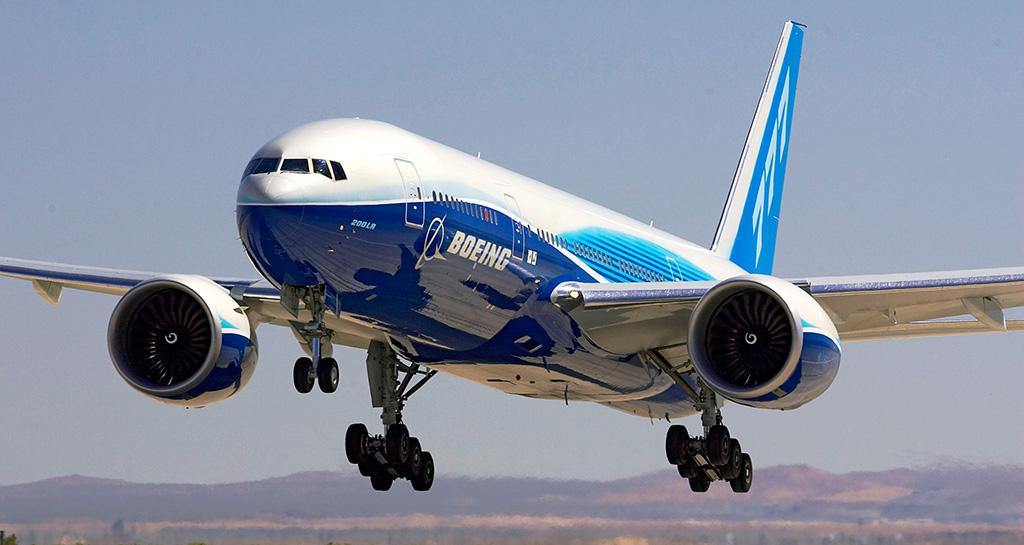 Derived from the 777-300ER and based on the overall fuselage dimensions of the 777-200, the -200LR (Longer-Range) variant was developed to serve ultra-long-haul routes between virtually any two points on the planet. 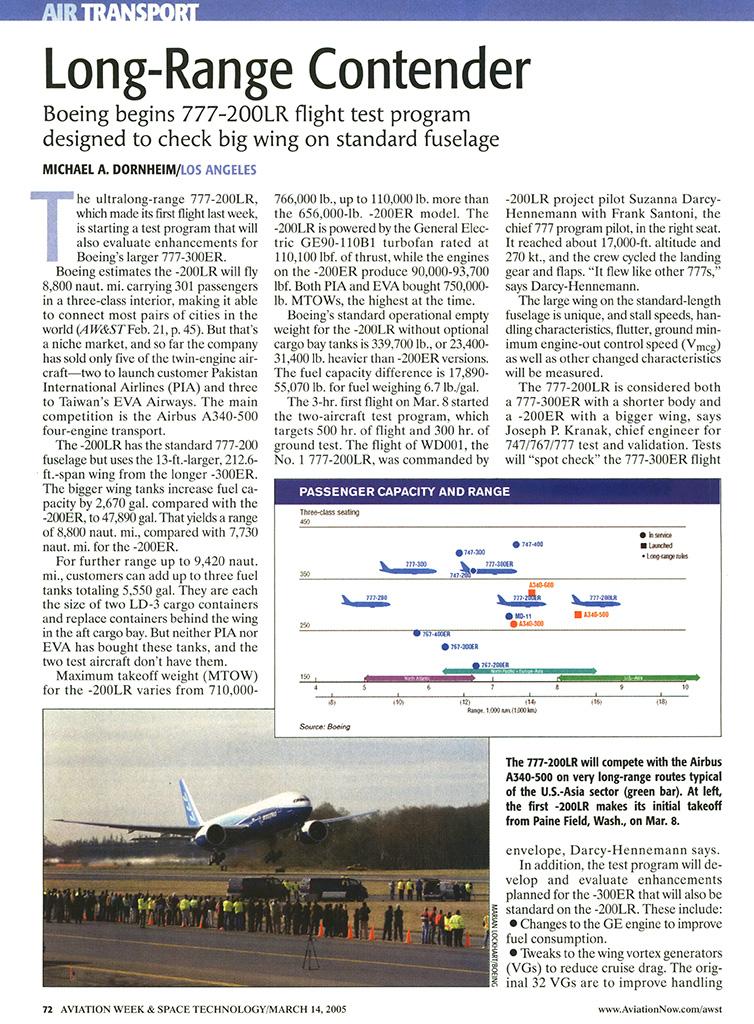 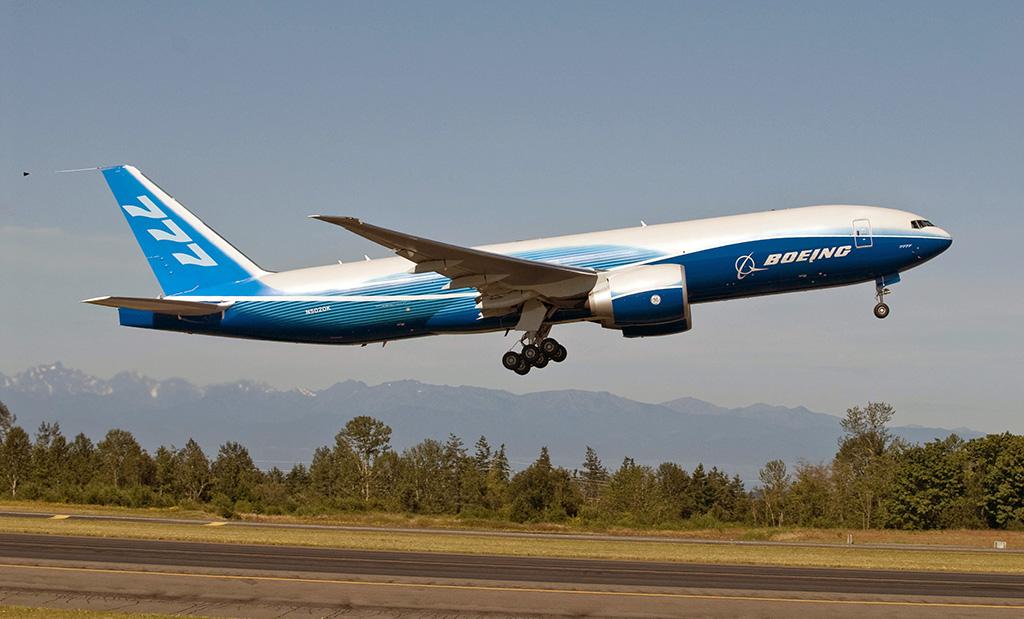 The 777F freighter is derived largely from the strengthened structure, wings, engines and fuel systems of the -200LR. First flown in 2008, the aircraft’s maximum payload of almost 225,000 lb. has made it popular with operators as a replacement for older 747-200Fs, McDonnell Douglas DC-10s and MD-11s. The first twinjet freighter was delivered to Air France in 2009 and, as of early September, 143 777Fs are now in service. 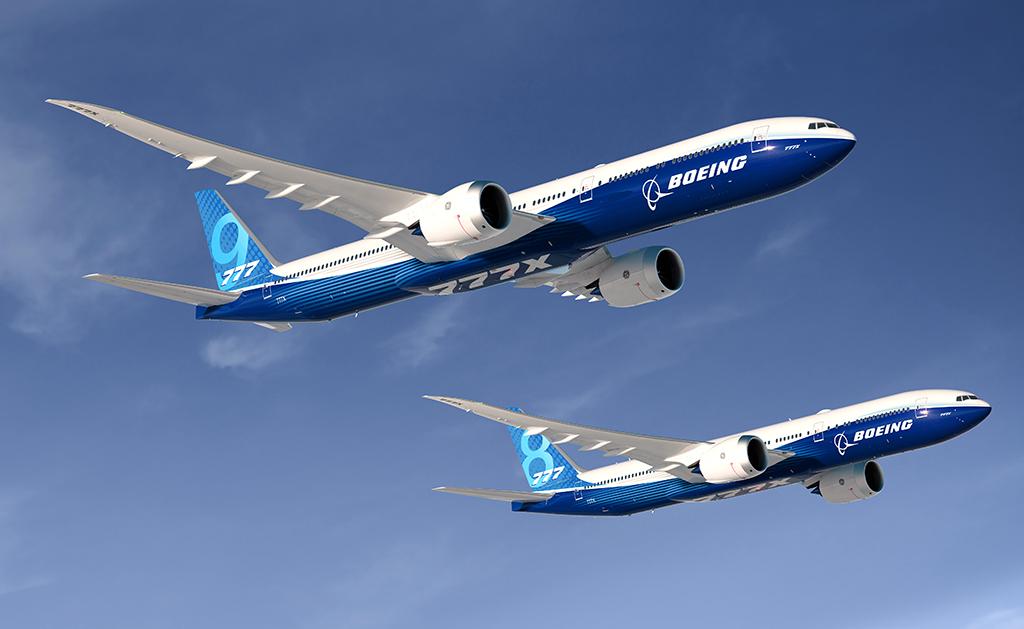 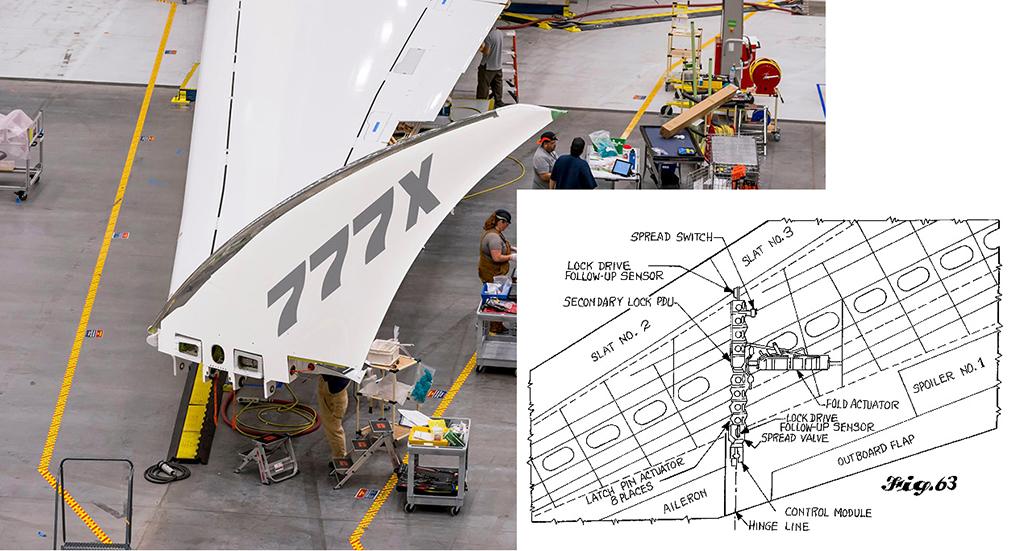 Now installed on the wing destined for the first 777-9, WH001, the outer 12-ft. folding-tip section is designed for code E airports that restrict use to aircraft with wingspans of 65 m (213 ft.) or less. To minimize maintenance and service-issue concerns, the wingfold is much simpler than the folding mechanism developed (but never adopted) on the original 777-200 (see inset) and does not even incorporate lights. The orange wire visible in the image is for flight-test purposes only.

As the prototype Boeing 777, WA001, settles into retirement at the Pima Air & Space Museum in Arizona, the first member of the next-generation 777X family. WH001, is in final assembly at Boeing’s Everett facility in Washington. Between them, these milestone aircraft span 24 years of continuous production and development, over which the program has amassed almost 1,850 orders and more than 1,400 deliveries. Over the same period, the family has expanded to include eight main variants and three generations, some highlights of which are covered here.