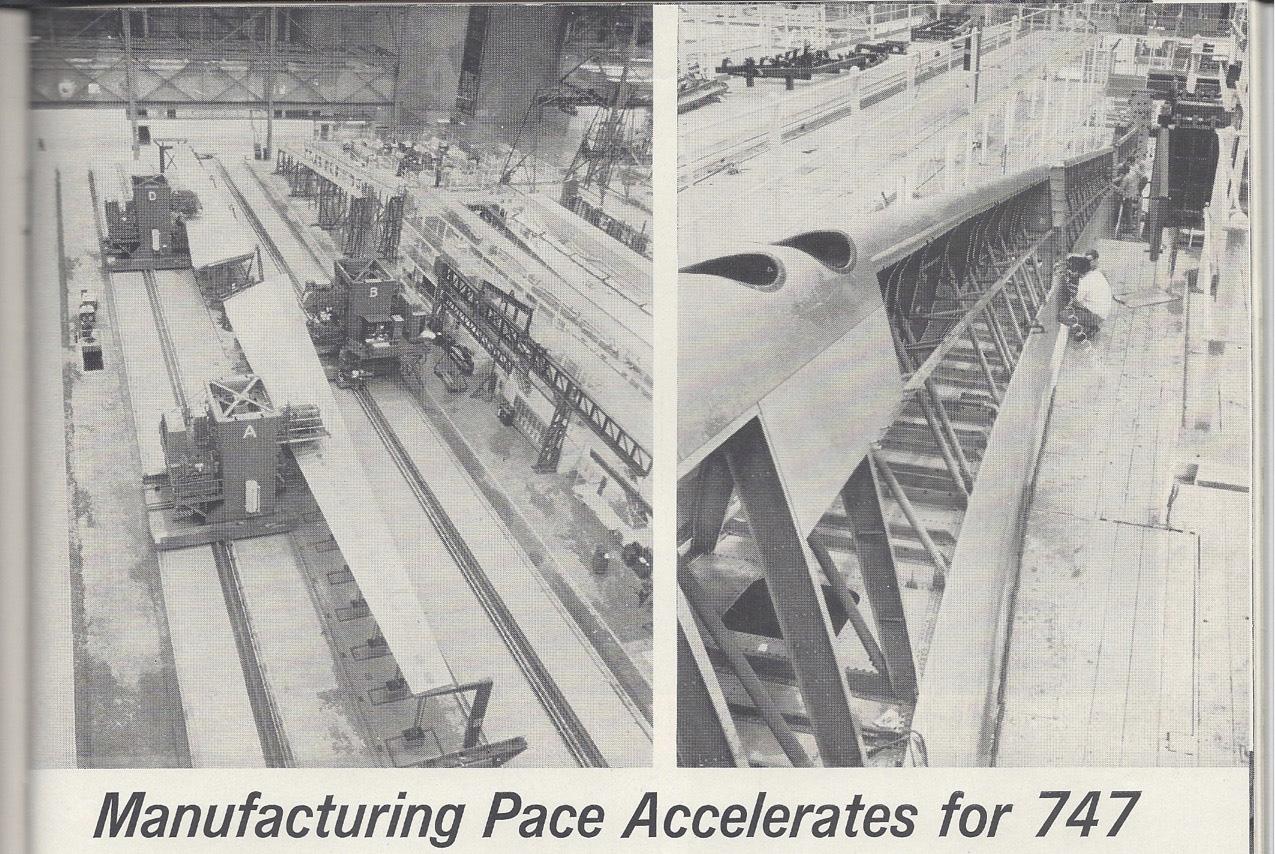 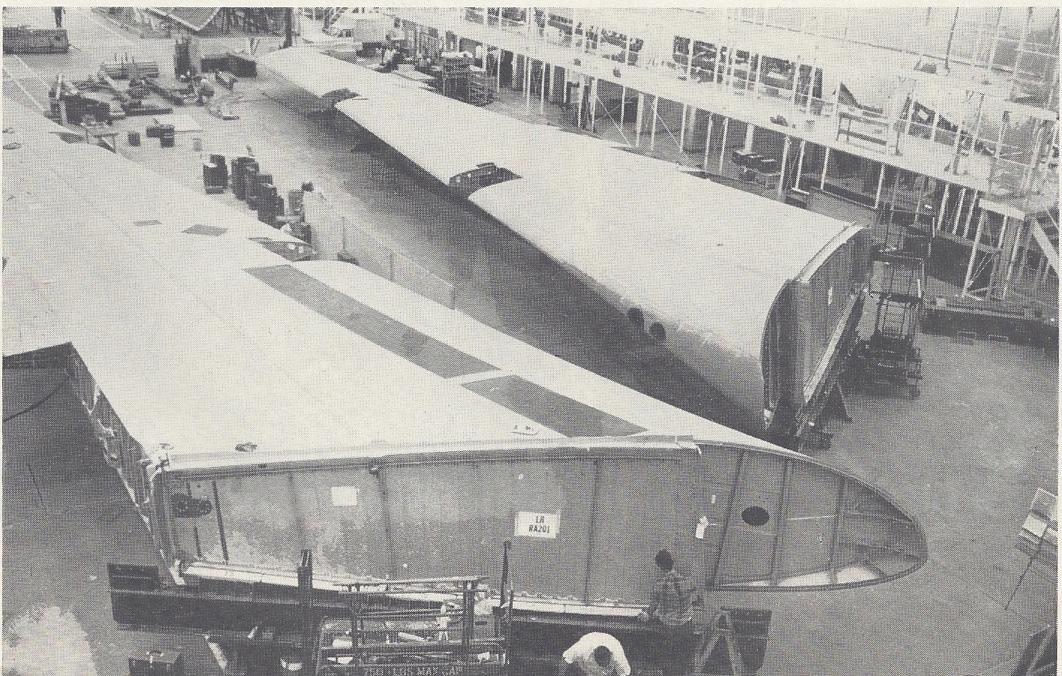 Each wing, weighing approximately 28,000 lb., then is placed on supports for easier access to finishing. Wing thickness at the root is over 6 ft. Holes in wing leading edges at upper right are for landing lights. 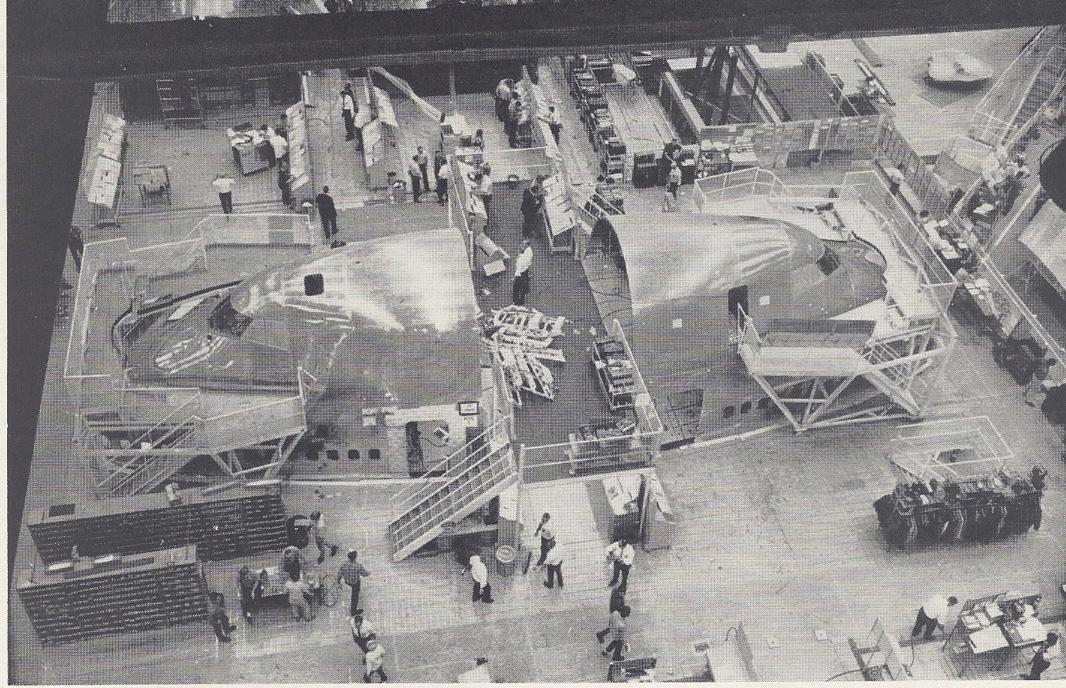 Cab sections made in Boeing's Wichita plant have bulk of wiring, tubing, insulation and the like installed prior to mating with the main fuselage. Work platform level is at the same height as the main floor of the cab. 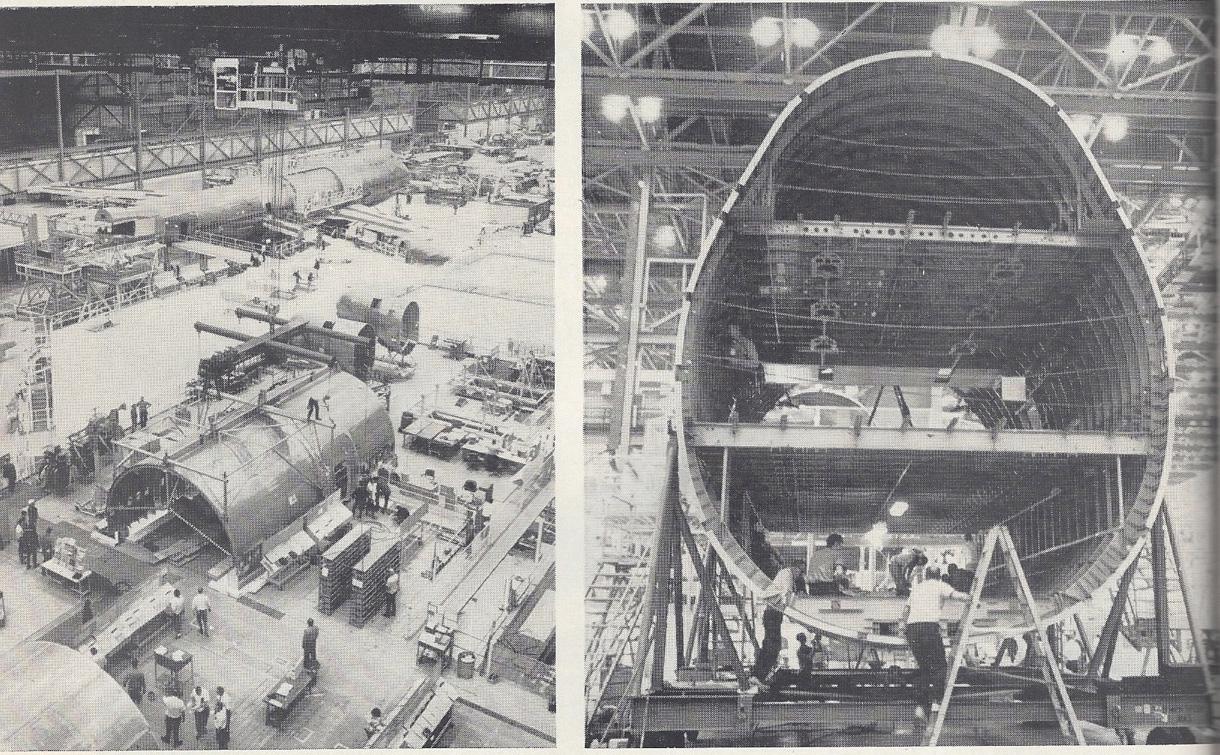 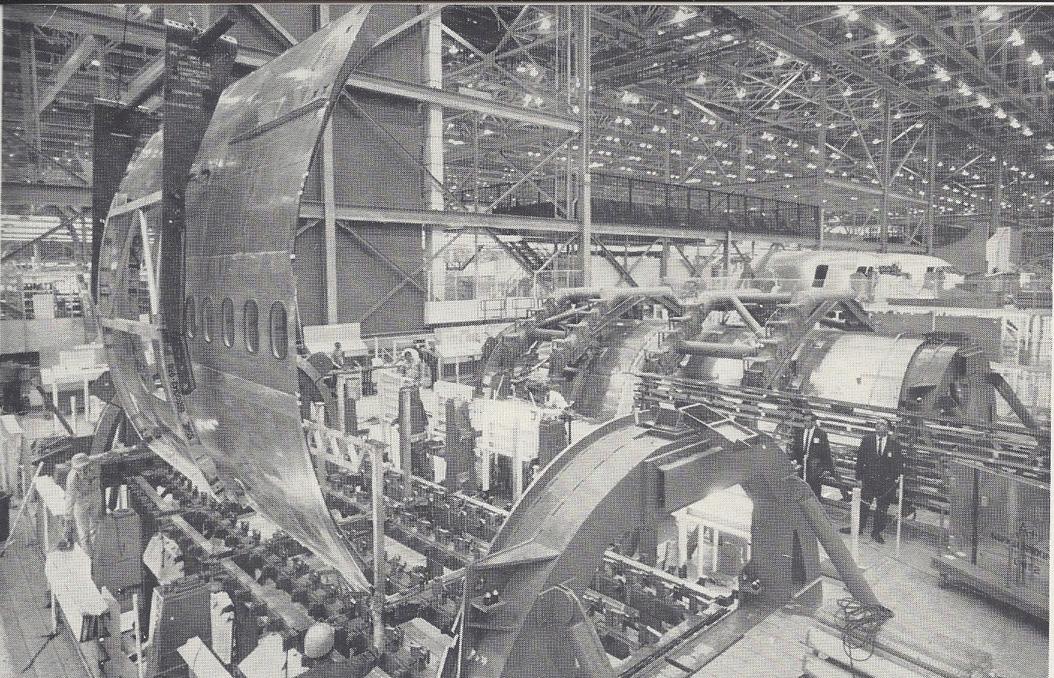 Fuselage panel made by Northrop Corp. is eased into section 44 build-up fixture using crane. This is typical of the way all fuselage sections are assembled. Large size of 747 components has required greater use of overhead cranes than anticipated. 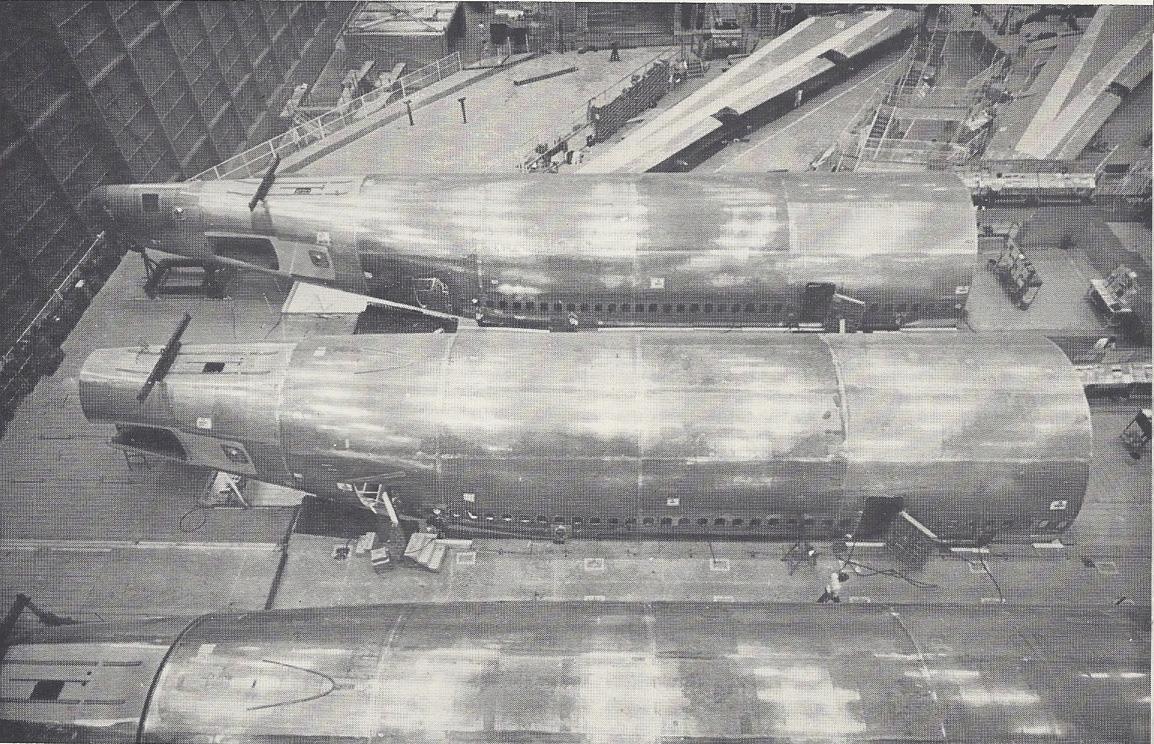 Aft fuselage consists of Northrop section 46 and LTV section 48. Section 48 comprises the forward two-thirds portion and section 46 the tapered rearward part. Each section is assembled from panels from subcontractors into one tube section in jigs. Outline of individual panels can be seen. 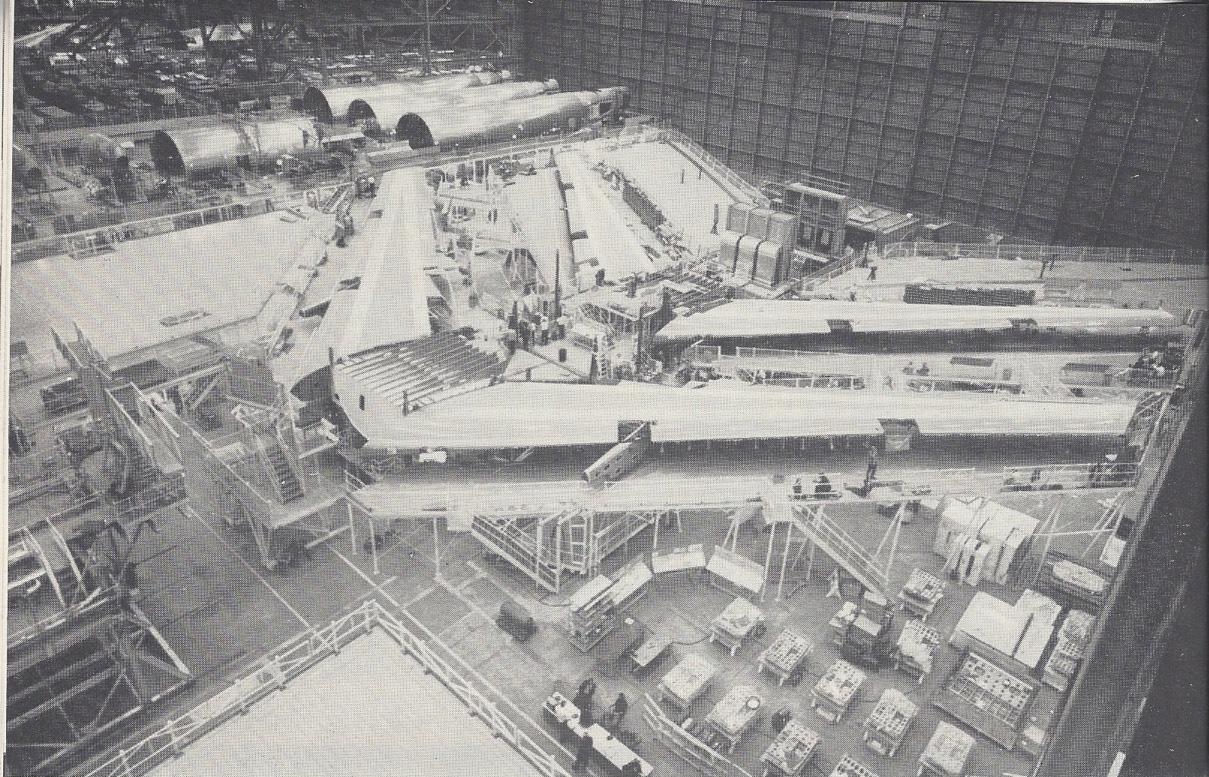 Assembly of the two wings to the carry-through section is done prior to mating with fuselage. Third station behind the two sets of wings being joined is a clean, seal and test area and is next in sequence. 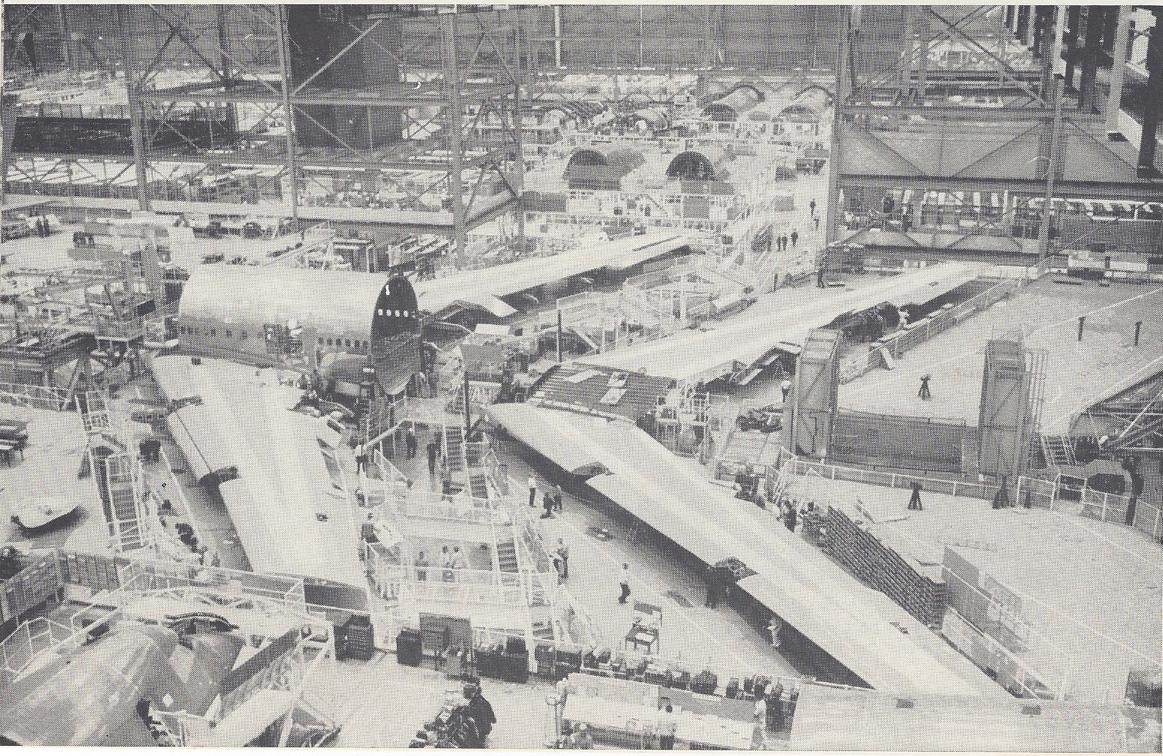 Wing-body join station precedes joining of the three main fuselage sections at the next station. Station shown is in one of two final assembly bays in use. A third bay is used for subassembly work. 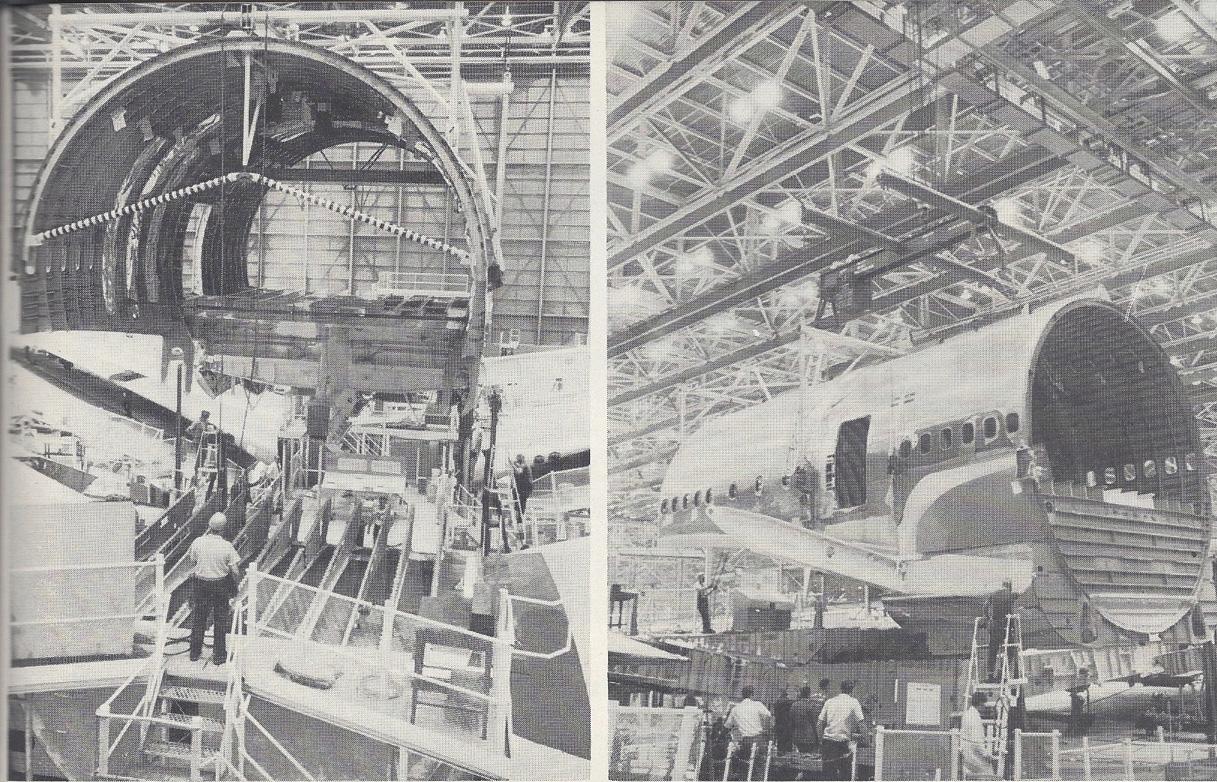 Wing-fuselage mating has been simplified by using only a short fuselage section. Section 44 is placed atop the wing carry-through section and bolted in place (left). Landing gear support is I beam extending from fuselage (right). 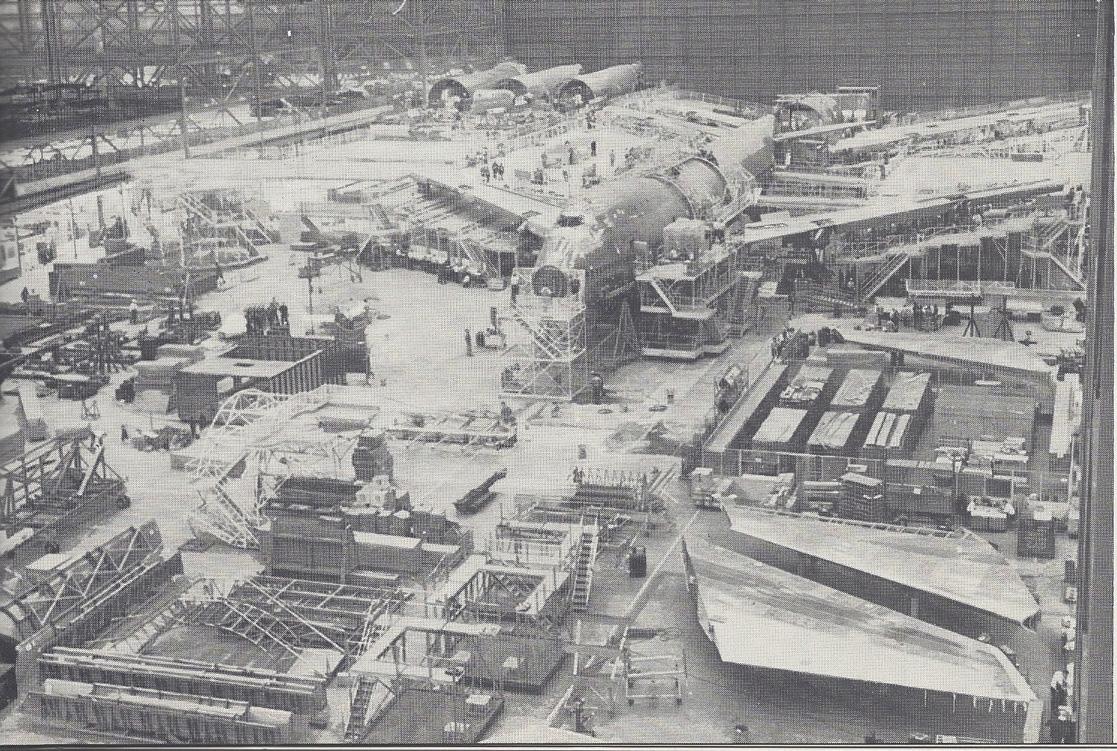 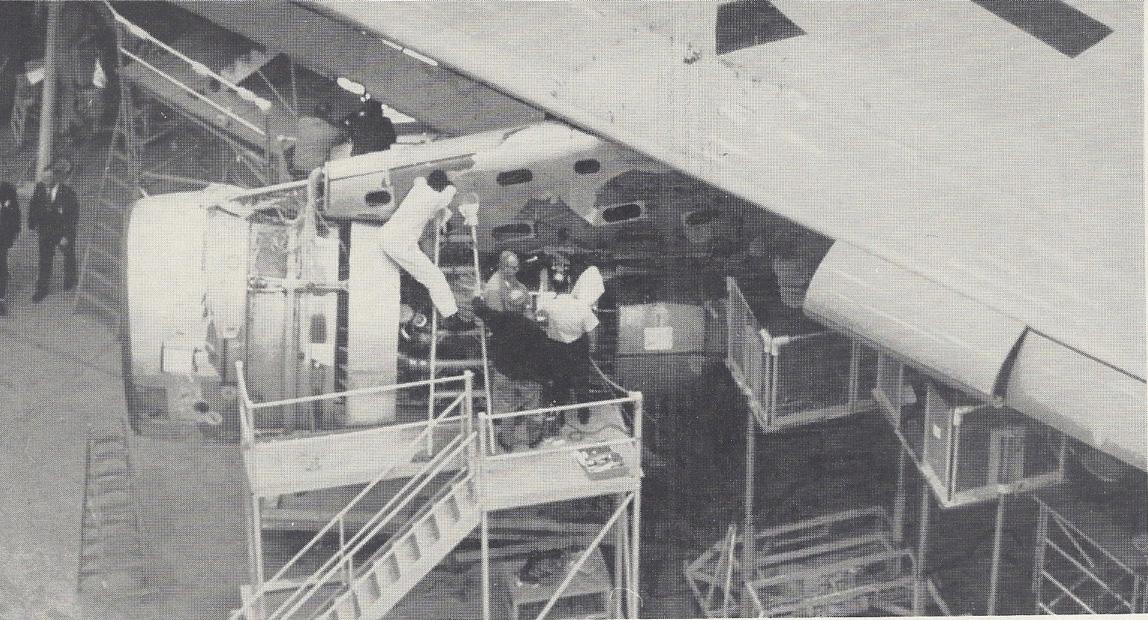 Workmen check controls of Pratt & Whitney JT9D engine at final assembly and installation position number three on second flight test aircraft. This third final assembly position is last prior to rollout from the factory to the paint hanger. Variable-camber leading edge flaps are at lower right. 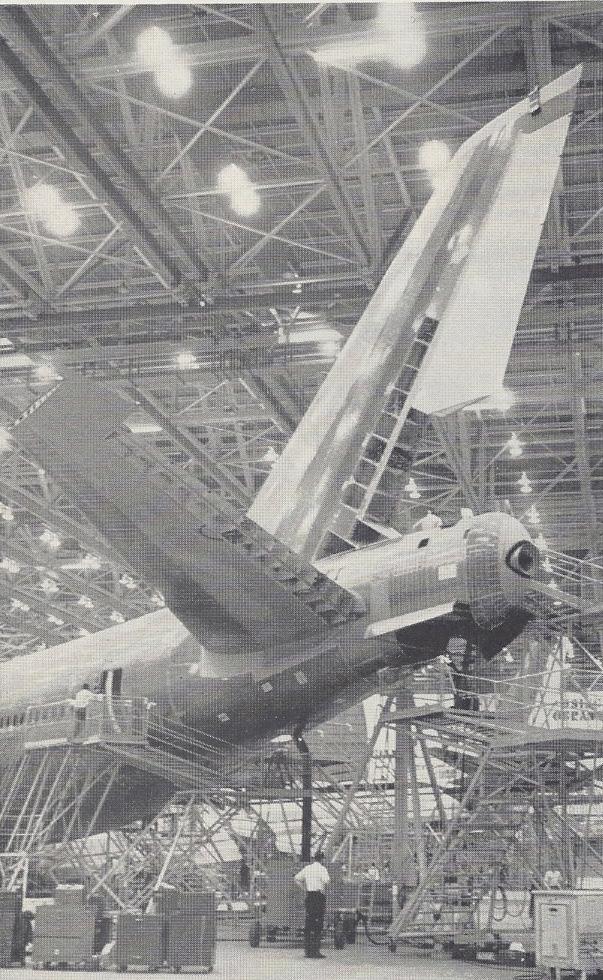 Access doors for Garrett auxiliary power unit are on underside of tail. Lower halves of split rudder and elevators have not been installed. 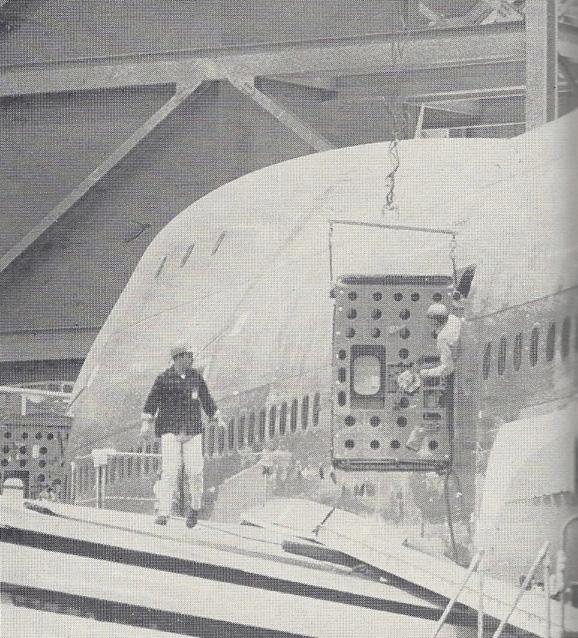 Crane is used to place door in position for attachment. Although basic assembly techniques developed in earlier programs are used on the 747, substantially greater use is made of multi-level scaffolding and overhead cranes. 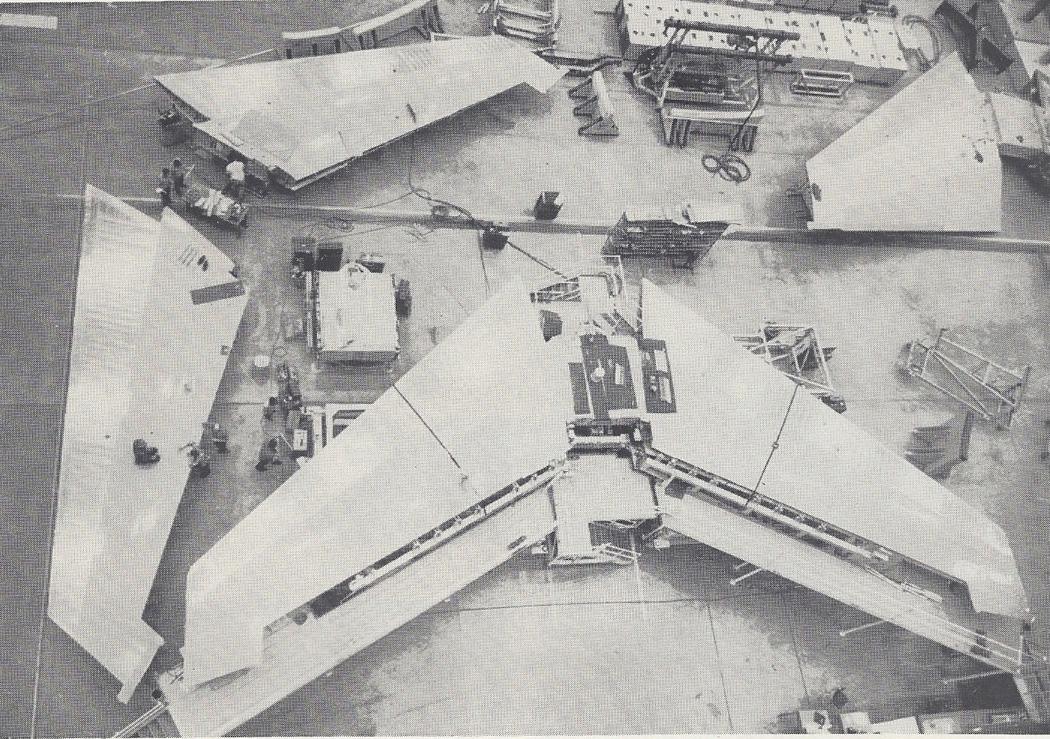 Horizontal tail is built much the same as the main wing, with each stabilizer attached to a carry-through section to form a single unit. Elevators are installed after stabilizers are mounted to rear fuselage. 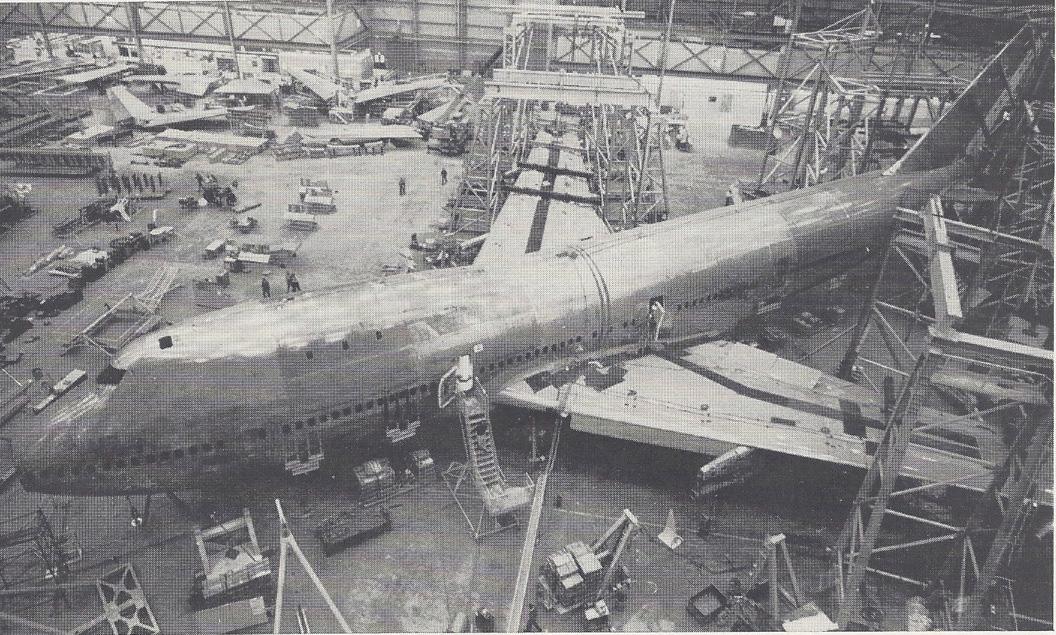 Flight loads survey aircraft which is expected to roll out soon is number three aircraft off the line. It is shown during an early calibration of on-board instrumentation. 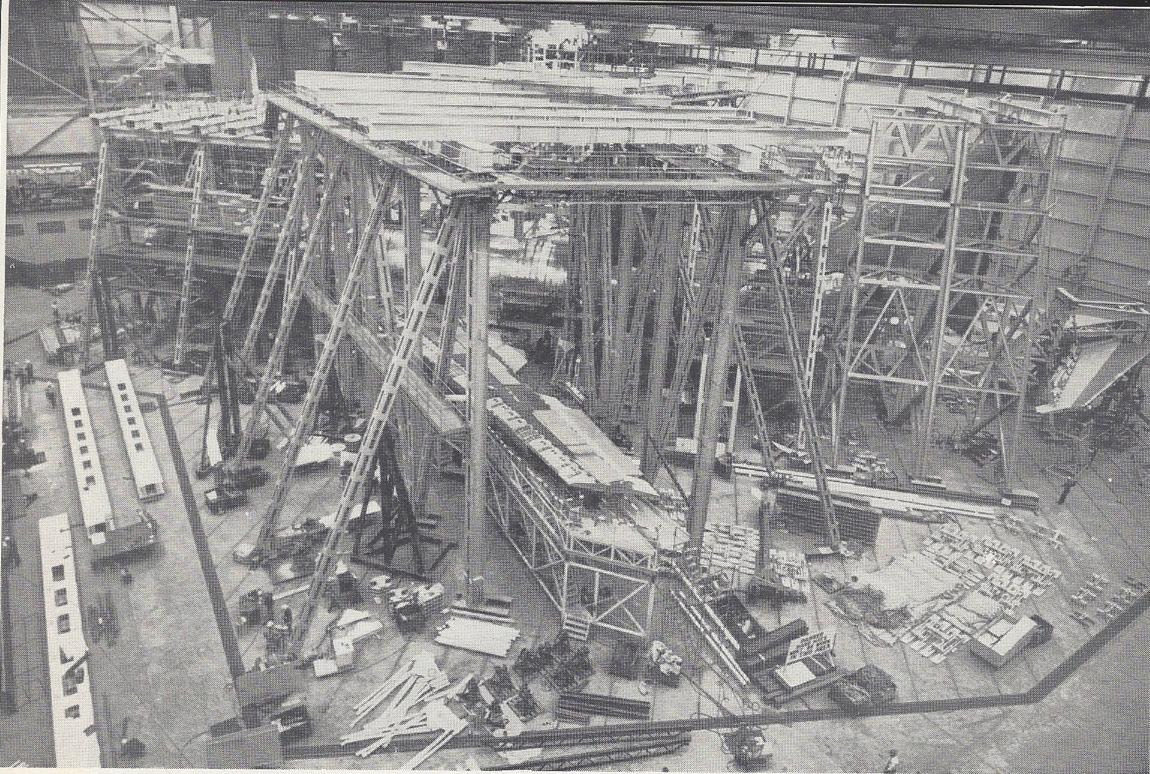 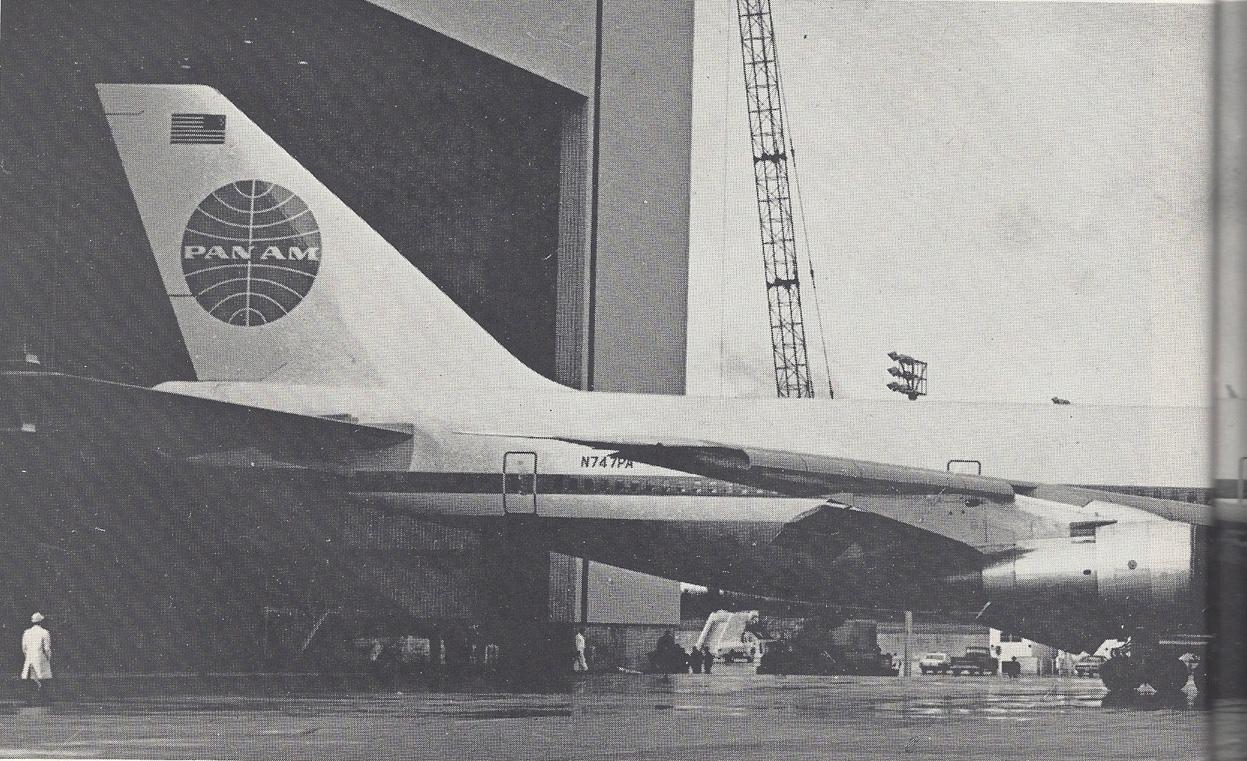 Production rate is building to an 8.5 units-per-month rate by early 1971. First two flight test aircraft now are flying from Boeing Field, Seattle, but initial flights were at Paine Field near the plant. The number three flight loads survey aircraft is expected to roll out in early May. 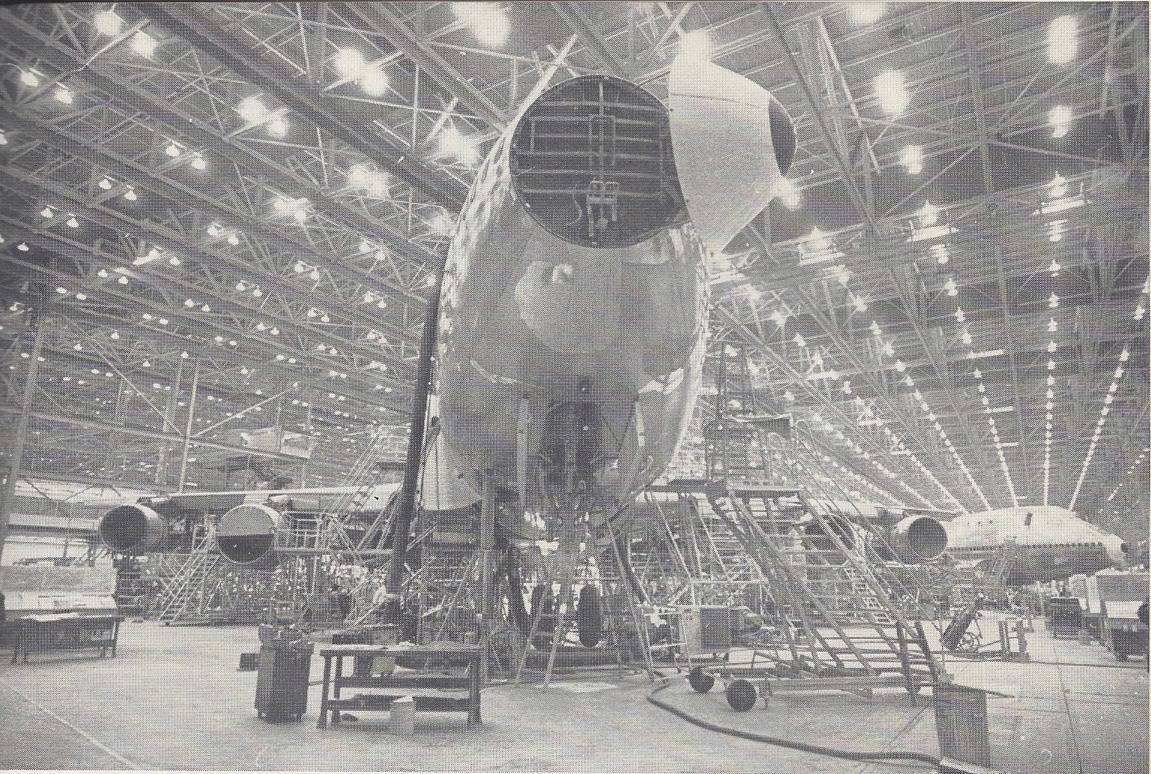 Ground view of number two 747 in final assembly shows radome swung aside. Aircraft at this point, just prior to rolling out the door, is being subjected to final proof testing of all systems and a structural shakedown of the entire aircraft. 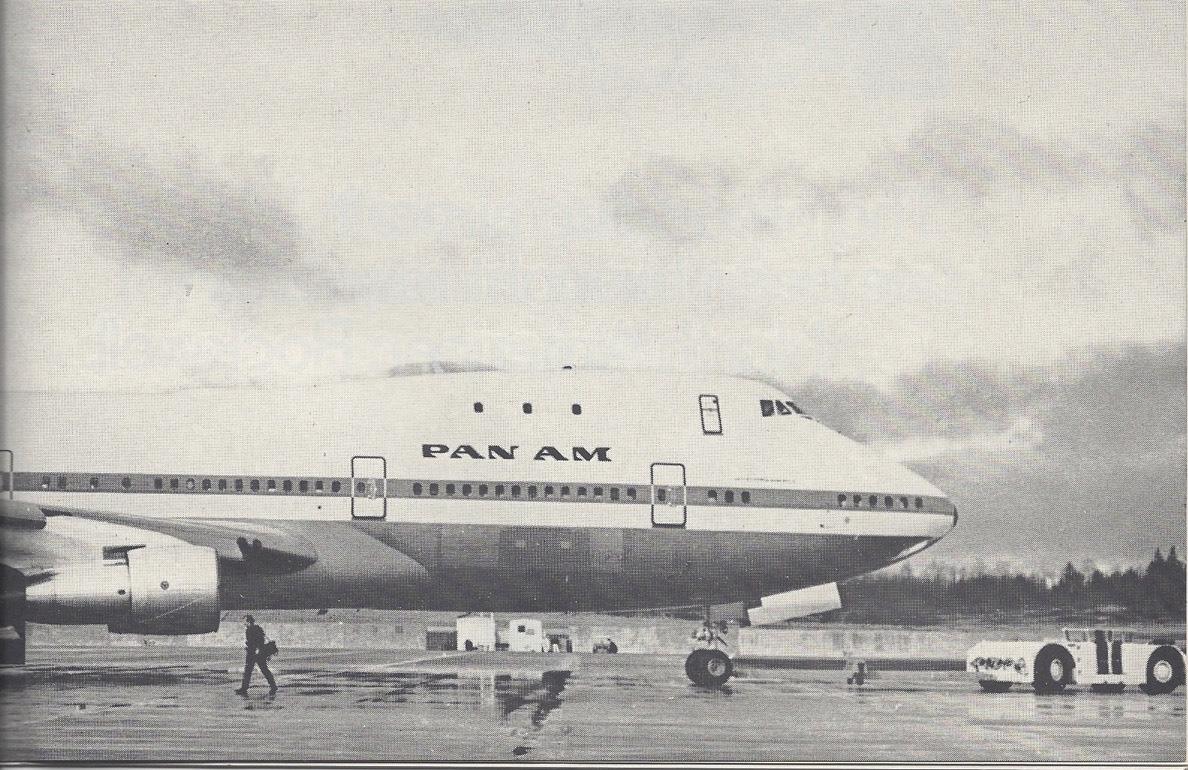 Number two flight test aircraft in Pan American colors is towed from paint hangar to flight test line. By mid-April, the number one 747, owned by Boeing, which flew in February, had accumulated 63.5 hr. 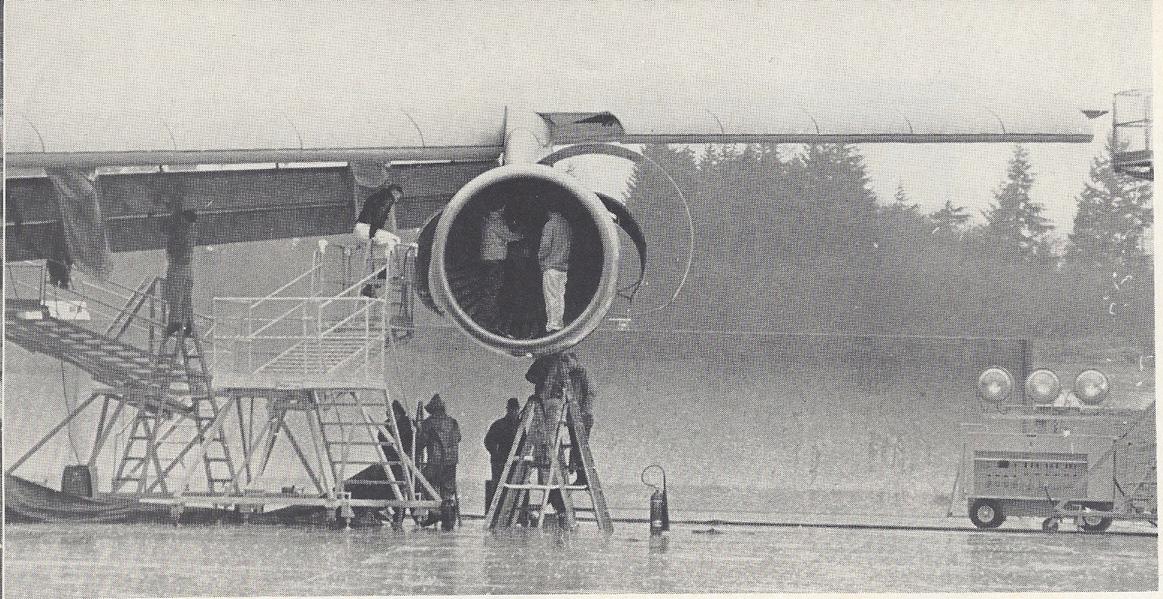 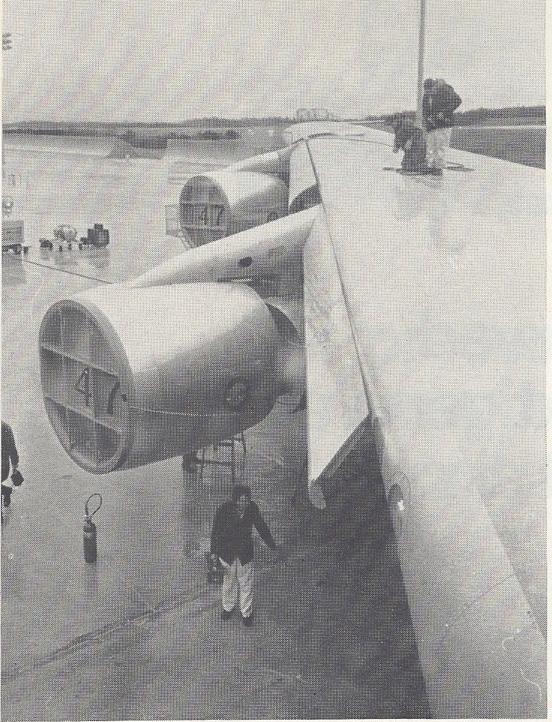 Overwing access panel has been opened for inspection of hydraulic and electrical lines. Plastic engine inlet plugs installed in No. 3 and No. 4 engine inlets keep out dust and debris while aircraft sits on ground. Krueger flaps inboard and variable-camber flaps outboard are extended. 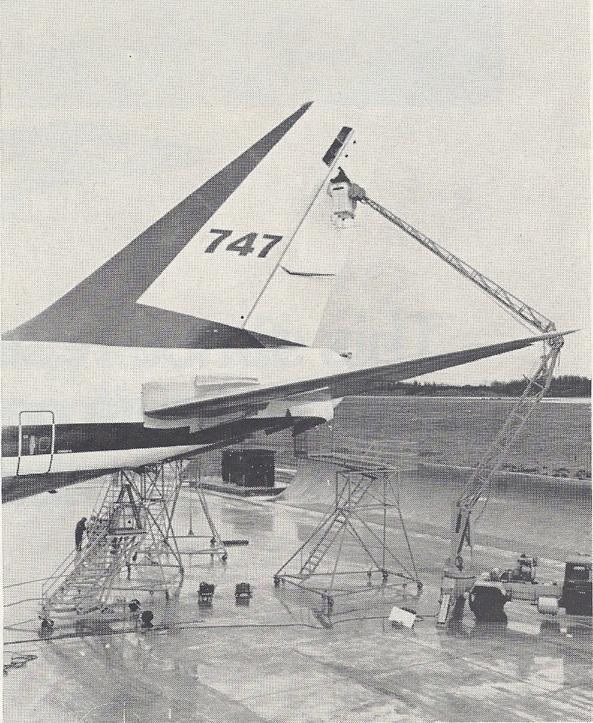 Vertical tail is inspected with aid of special truck-mounted hoist.

The April 28, 1969, issue of Aviation Week & Space Technology carried an 11-page special photo report detailing the Boeing 747 assembly process, with photos of the second and third aircraft on the production line at Everett, as well as photos of the first 747-100 being inspected after its first flight. See the full report in Aviation Week's digital archive.

This gallery was originally published on April 13, 2015.