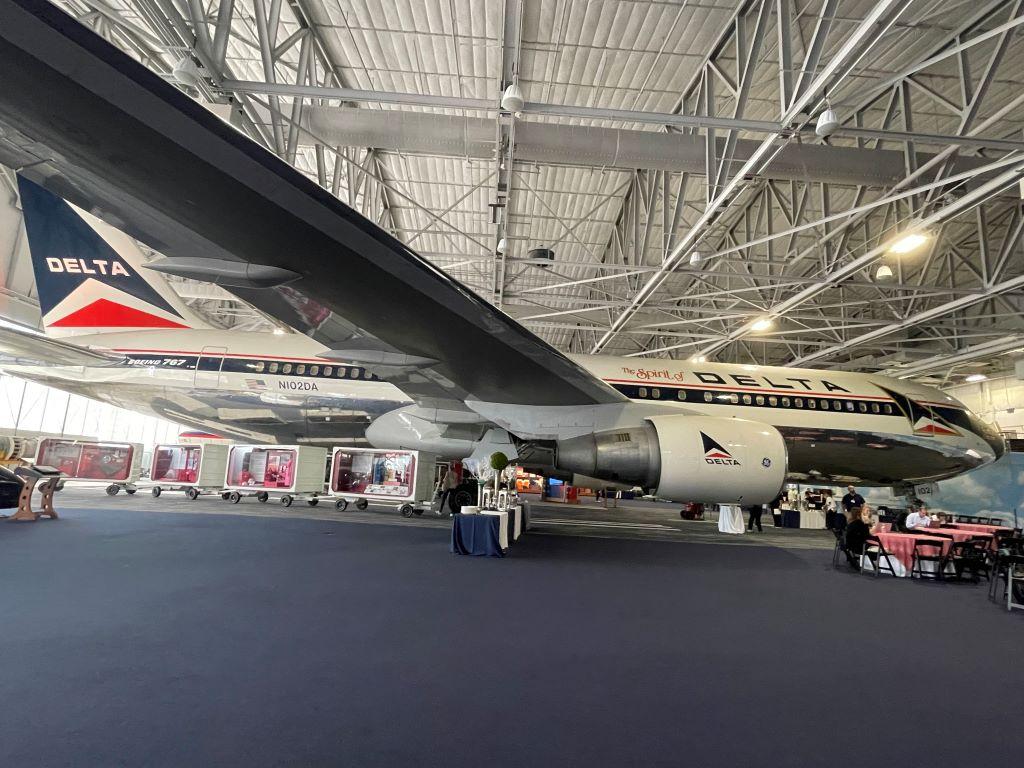 Project 767—The Spirit of Delta

[From Delta Flight Museum] In Spring 1982, the airline industry was troubled by a weak economy, high fuel prices and deregulation. After 35 consecutively profitable years, Delta posted a net loss. As a way of expressing their appreciation for company support during this trying time, Delta employees spearheaded “Project 767” to raise money to pay for Delta’s first Boeing 767. Led by three flight attendants, the project was an inspiring effort to raise $30 million through the combined donations of employees, retirees and friends. On December 15, 1982, over 7,000 employees, friends and the international media gathered at Delta’s Technical Operations Center, to present the airline with its first Boeing 767, Ship 102, christened “The Spirit of Delta.” Directly after the dedication ceremony, Spirit left Atlanta on its inaugural service flight to Tampa, Florida. 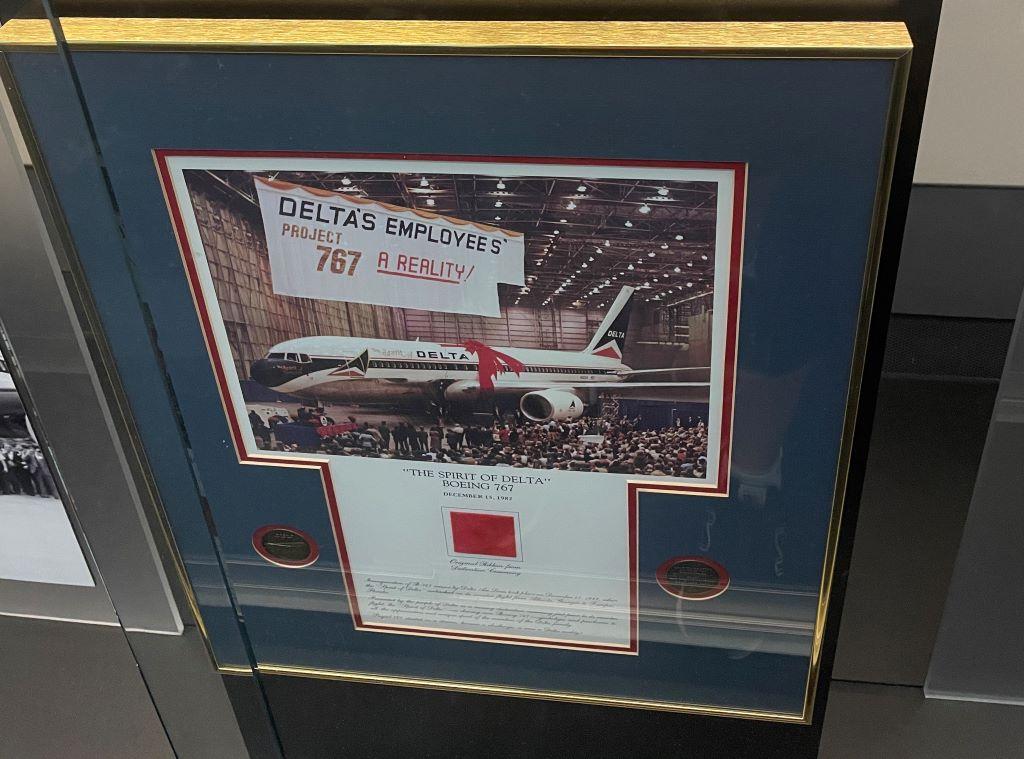 [From Delta Flight Museum] A 12-foot-wide red ribbon that was tied around the aircraft for the 767’s unveiling on December 15, 1982, was cut up into squares and a piece of that ribbon—with a picture of that ceremony—was presented to every Delta employee at that time. 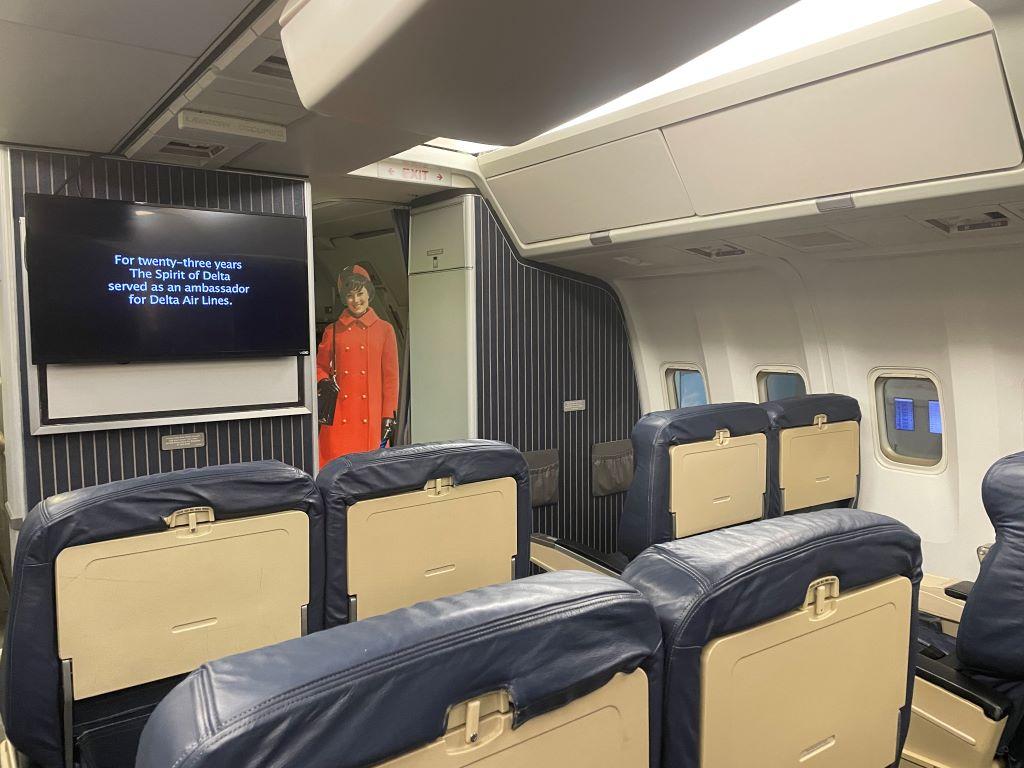 A look at first class inside the “Spirit of Delta” Boeing 767. Remember the big screens? 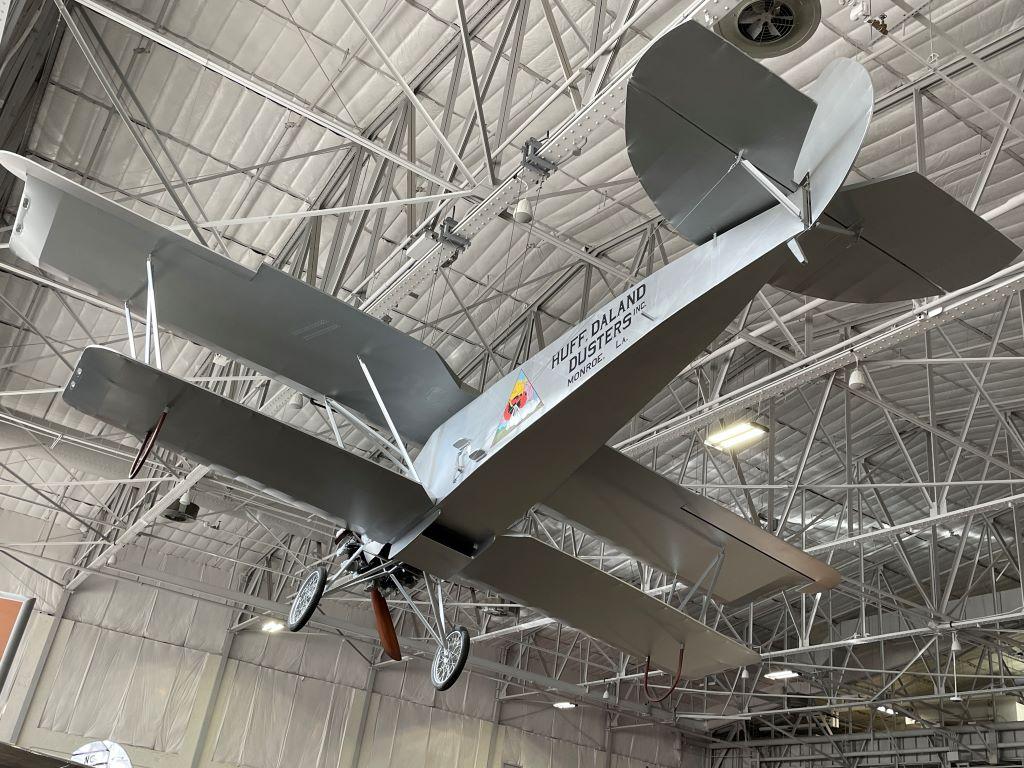 [From Delta Flight Museum] Replica of the Huff-Daland Duster, nicknamed the “Puffer,” was the first aircraft specifically designed for crop dusting in 1924. The crop duster goes back to Delta’s beginnings. A fleet of these aircraft were operated by a division of Huff Daland Airplanes, Inc., called Huff Daland Dusters, which was the world’s first aerial crop-dusting company and the predecessor of Delta Air Lines. A group of investors purchased Huff Daland Dusters in 1928, renamed the company Delta Air Service, and began passenger service in 1929. Delta continued to operate a crop-dusting division until 1966. 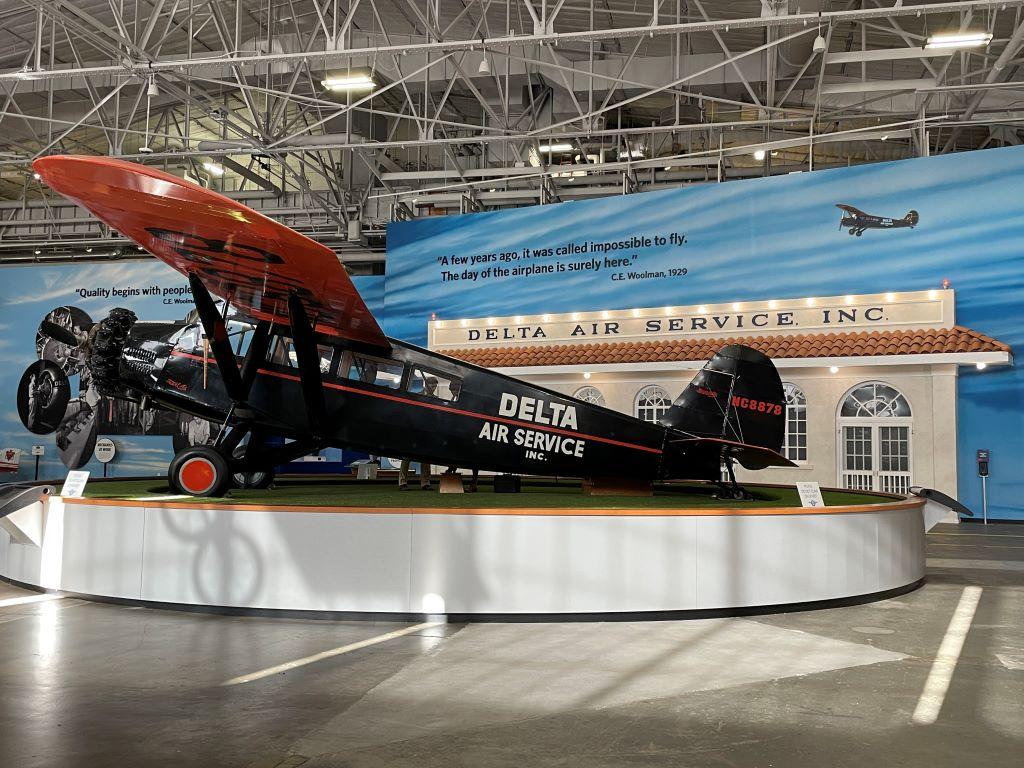 [From Delta Flight Museum] Restored 1931 Curtiss-Wright 6B Sedan painted in International Orange and black of the earlier 1929 Travel Air S-6000-B. Tail number NC8878 celebrates the Travel Air that flew Delta’s first passengers on June 17, 1929. Curtiss-Wright acquired the Travel Air Manufacturing Co. in August 1929. One of only four 6B Sedans still intact. Built in 1931 and carried executives of a pipeline company for the next decade. Fought fires in Montana for 31 years, from 1941-1972, hauling smoke jumpers and supplies. 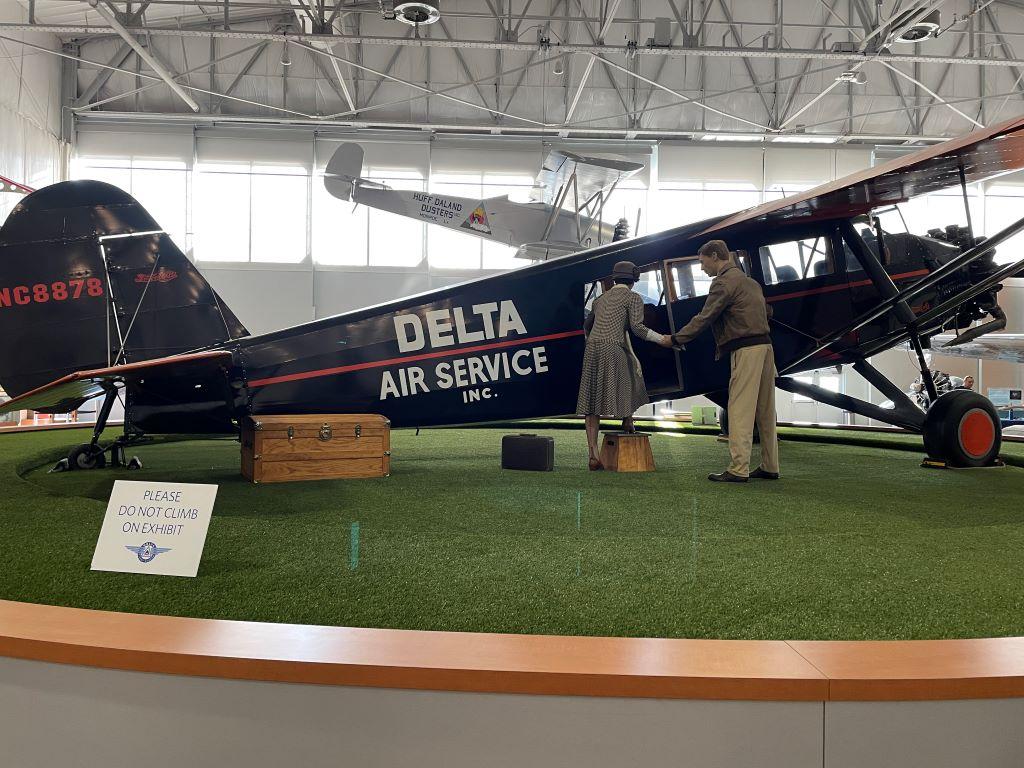 [From Delta Flight Museum] Travel Air S-6000-B, a single-engine plane with enclosed cabin. Capacity for one pilot and up to five passengers. The restored Travel Air represents the Travel Air registered as C8878, manufacturer's serial number 988, which flew Delta's inaugural flight on June 17, 1929 from Dallas, Texas to Jackson, Mississippi. 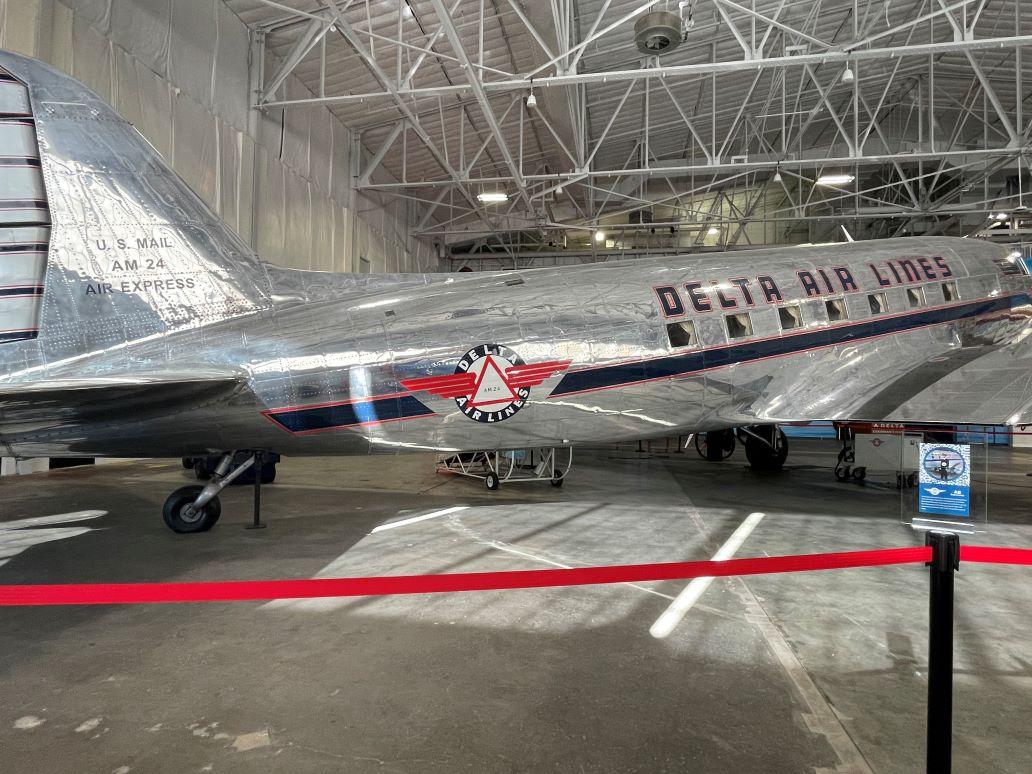 [From Delta Flight Museum] Only Delta passenger Douglas DC-3 in existence. According to Delta Air Corporation Daily Flight Logs for Route A.M. 24, the first-delivered DC-3, Ship 40, named “City of Atlanta,” was the first DC-3 to go into scheduled service with Delta on December 24, 1940, from Atlanta, Georgia, to Birmingham, Alabama. Ship 41 went into service on January 19, 1941, flying from Atlanta to Ft. Worth, Texas. Delta gave Ship 41 a major update in early 1950s: added an airstair door, moved the galley forward of the passenger door, moved the lavatory to the forward bag bin area, and increased seat capacity from 21 to 25 passengers. A new “white top” exterior paint scheme included Delta’s Flying D logo. Ship 41 retired from Delta service in April 1958, and was purchased by North Central Airlines, later part of Northwest Airlines. 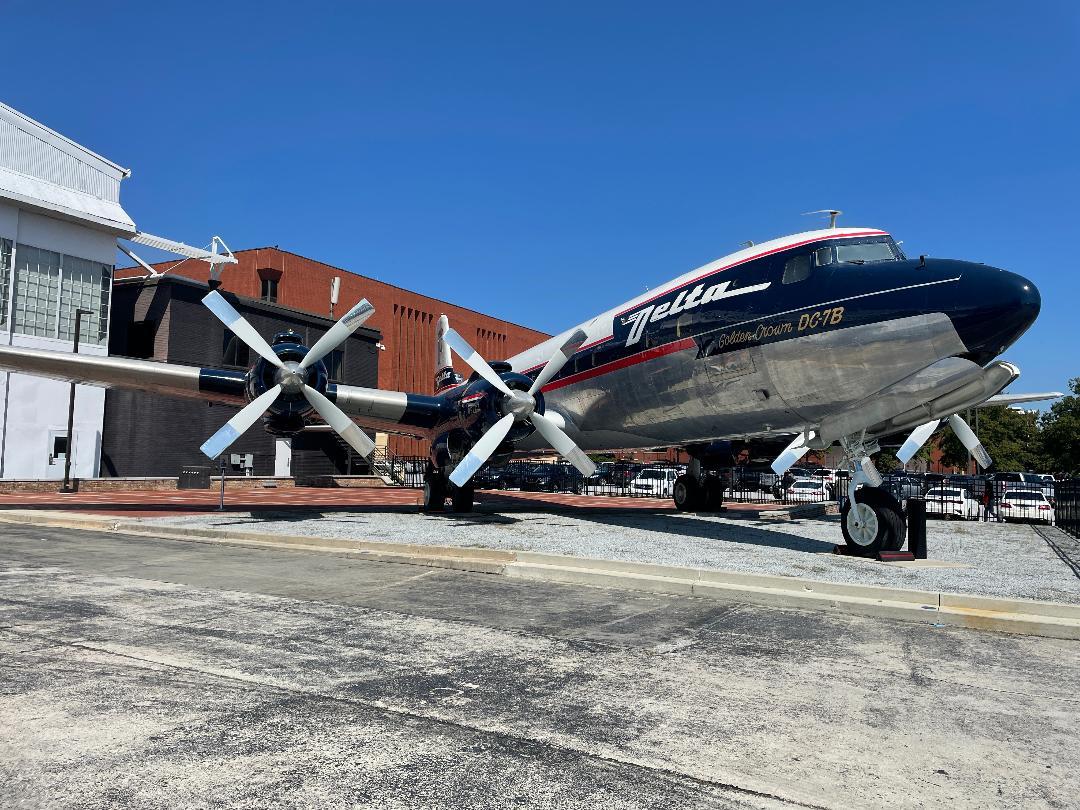 [From Delta Flight Museum] Delta Golden Crown DC7-B—the last DC-7B to fly for Delta—stands in front of the Delta Flight Museum. The Douglas DC-7B—which was brought to the museum in January 2021—made its mark on Delta and the world of aviation by bringing style to the skies with four screaming Wright Duplex Cyclone R-3350 engines, which provided a familiar outdoor soundtrack for Delta’s General Offices adjacent to Hartsfield-Jackson Atlanta International Airport in the 1950s and ‘60s. The DC-7B Ship 717 made a much quieter, more unassuming return to Delta’s original aircraft hangars that now make up the Delta Flight Museum. 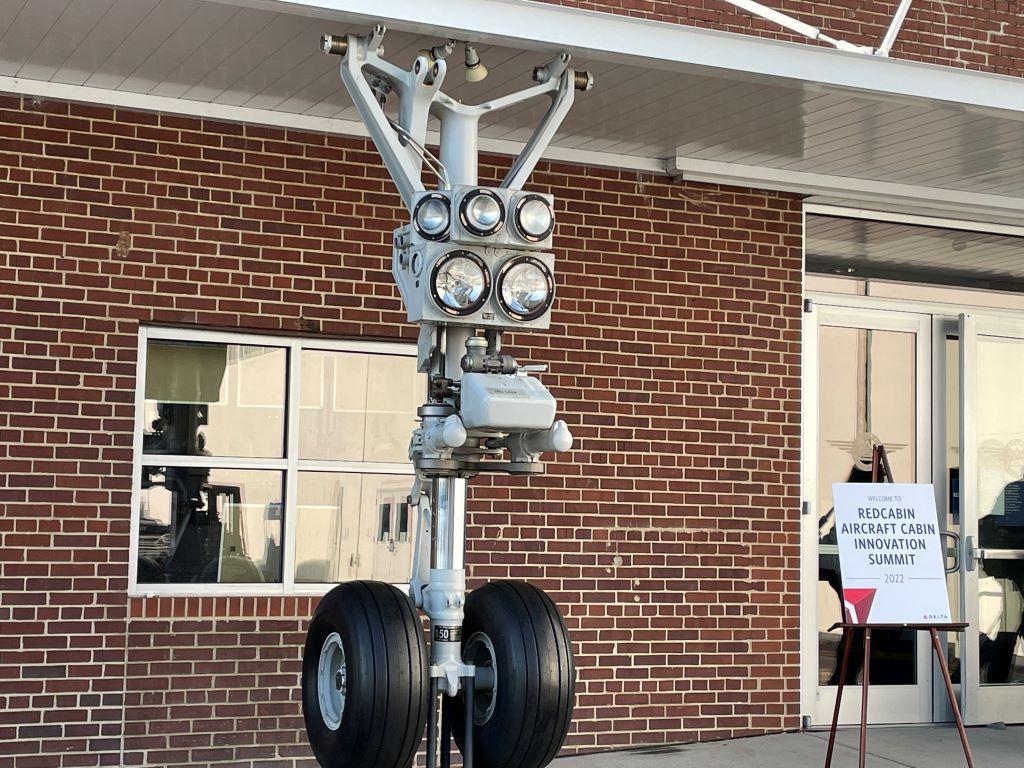 Well, if a landing gear holds up a commercial aircraft, why not use it as a column to hold up an awning? 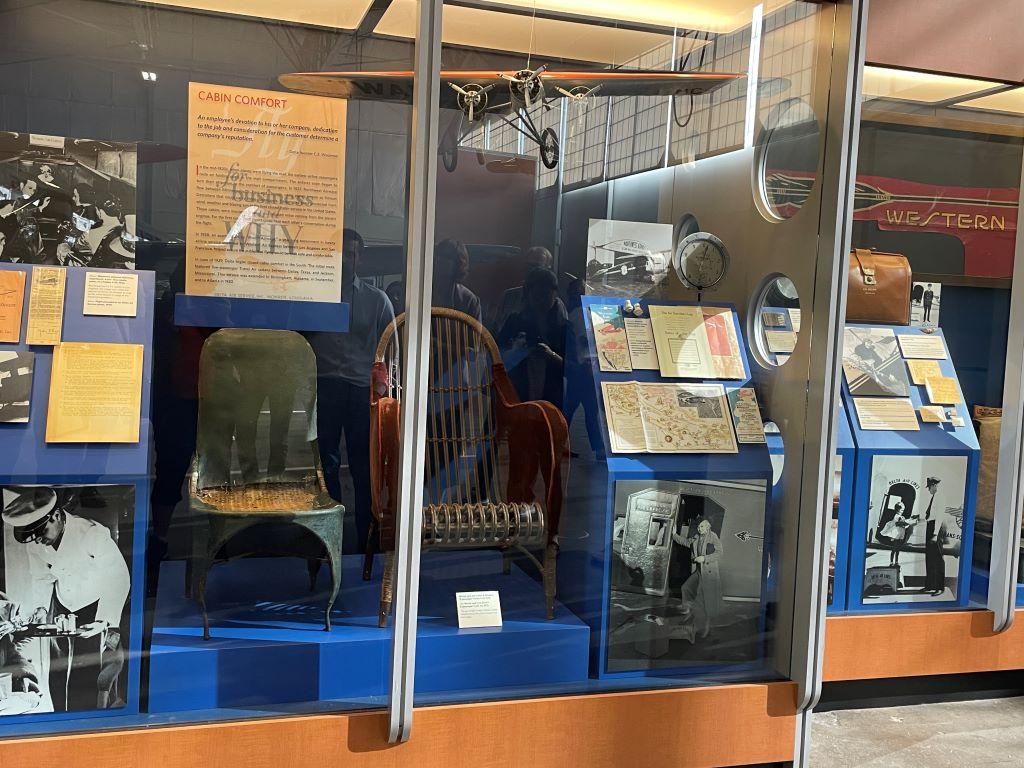 [From Delta Flight Museum] In the mid-1920s, when planes were flying the mail, the earliest airline passengers rode on folding seats in the mail compartment. Wicker seats, anyone? 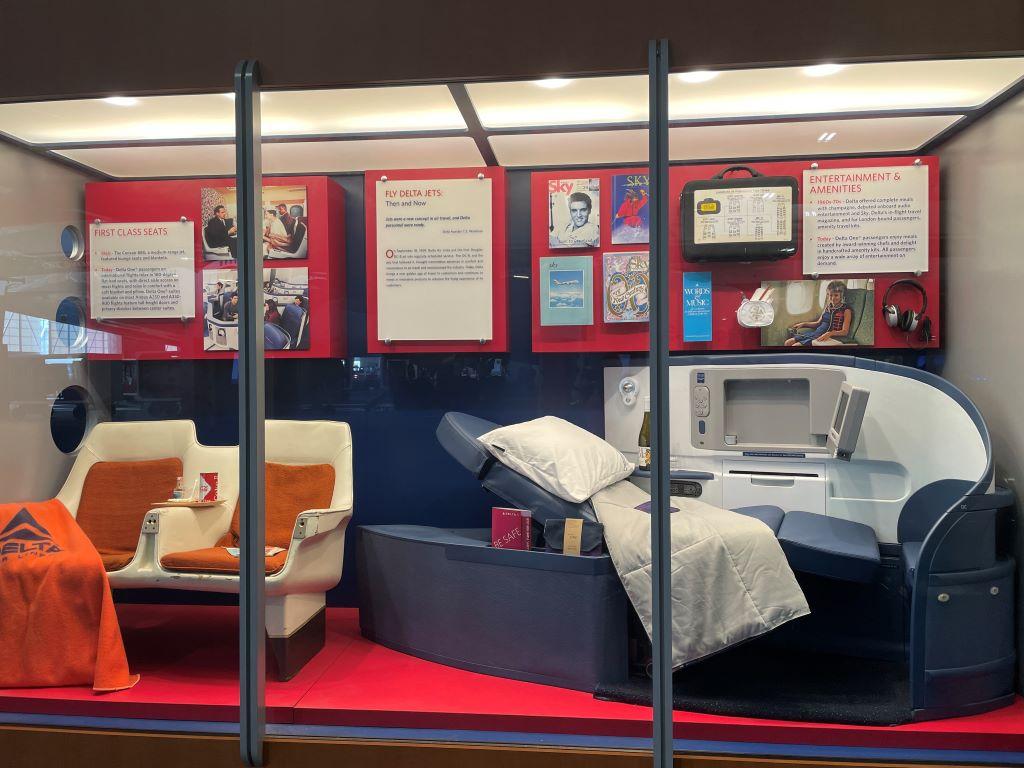 Delta Air Lines, which hosted the Red Cabin Aircraft Cabin Innovation Summit in Atlanta, Georgia, Sept. 13-15, welcomed over 200 aviation innovators to the Delta Flight Museum in its hometown to experience the carrier’s historic aircraft—as well as a look at some earlier cabin interiors—dating back to the 1920s.

Standing at the heart of the exhibit is the “Spirit of Delta” Boeing 767, which tells of an inspiring effort led by three flight attendants to raise $30 million for Delta’s first Boeing 767 through combined donations of employees, retirees and friends. Here is a look at that inspirational story, as well as a few exhibits detailing Delta’s history. All caption information was taken from the Delta Flight Museum.