Icelandair has taken delivery of one new Boeing 737 MAX-8 on long-term lease from Aviation Capital Group, part of a multi-aircraft transaction between the two companies. 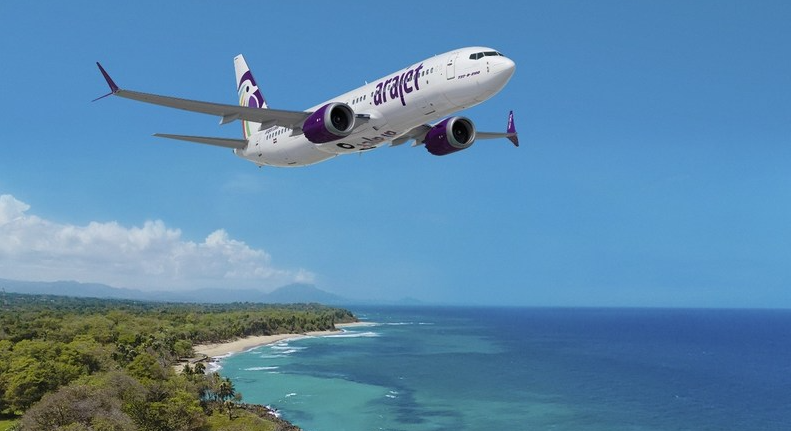 Santo Domingo-based ULCC startup Arajet placed a firm order for 20 Boeing 737 MAX 200 aircraft, with 15 options. The startup, which bills itself as the Caribbean’s first ULCC, plans to launch services in May and plans to grow its fleet to as many as 40 aircraft. 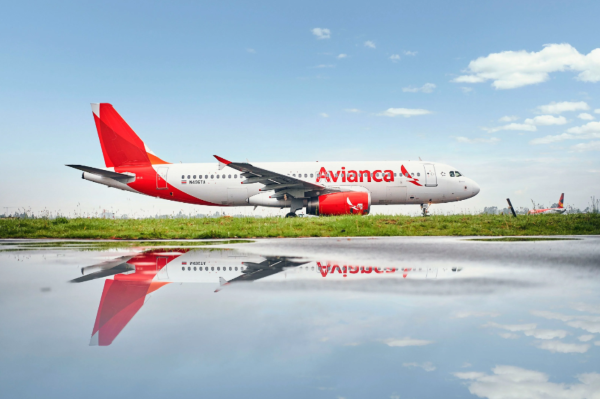 Colombia’s largest airline Avianca ordered 88 Airbus A320neos with purchase options for 50 additional aircraft. Avianca placed the order after emerging from Chapter 11 bankruptcy protection in late 2021. The airline said the aircraft would be incorporated into its fleet between 2025 and 2031, and the 88 new Airbus narrowbodies are in addition to the more than 110 aircraft it has its passenger operations. 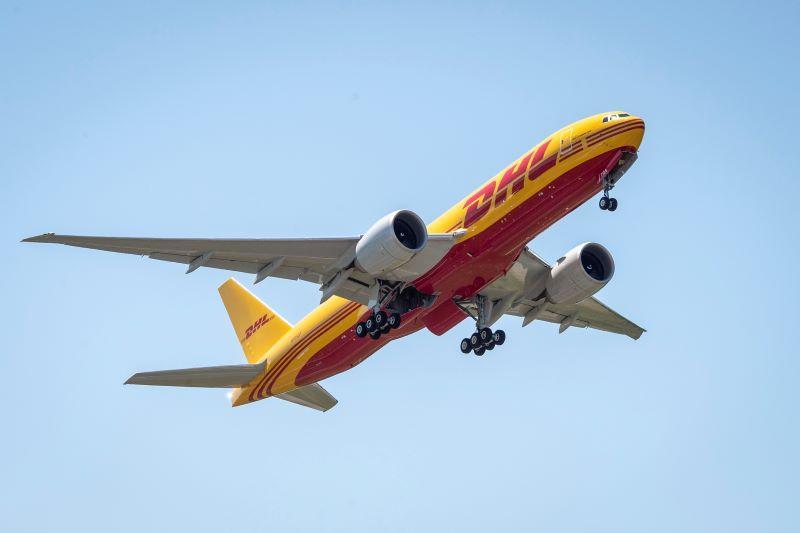 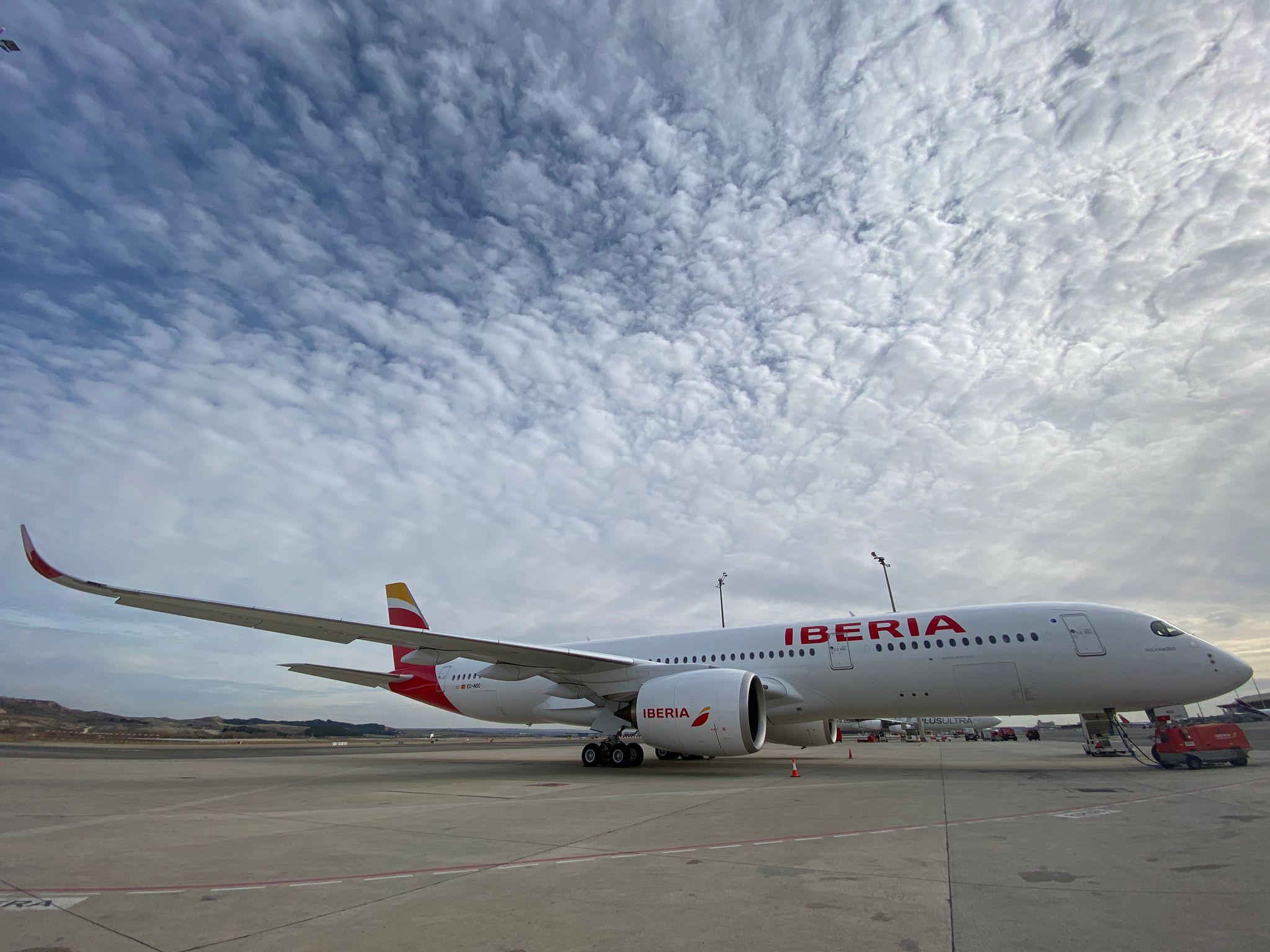 Iberia revived fleet revival plans and is taking delivery of nine new aircraft—three long-haul Airbus A350-900s (the first was delivered Feb. 23) and six A320neos for medium- and short-haul routes in the 2022 first half. The first of eight A321XLRs is scheduled to arrive in late 2023. 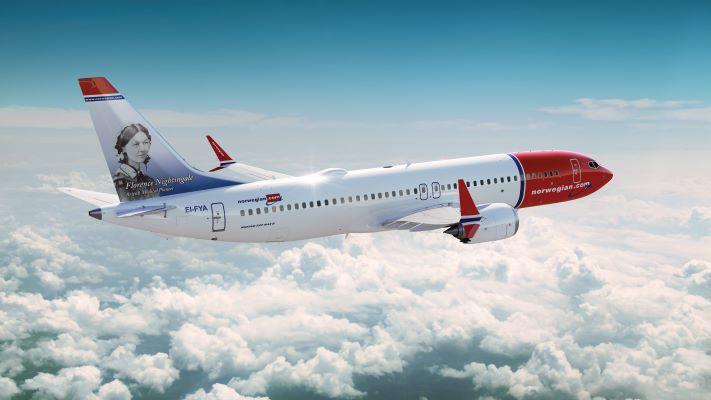 LCC Norwegian has agreed to lease 10 Boeing 737 MAX 8s and eight 737-800NGs from AerCap, as it looks to grow to an 80-aircraft fleet by summer 2023. This latest deal, which was announced on Feb. 28, forms part of Norwegian’s plans to grow its fleet to 70 aircraft this summer. Norwegian currently has 51 aircraft in service. Under this latest agreement, announced on Feb. 28, Norwegian will receive a further 18 aircraft in 2022 and 2023, taking it to 80 aircraft by summer of 2023. 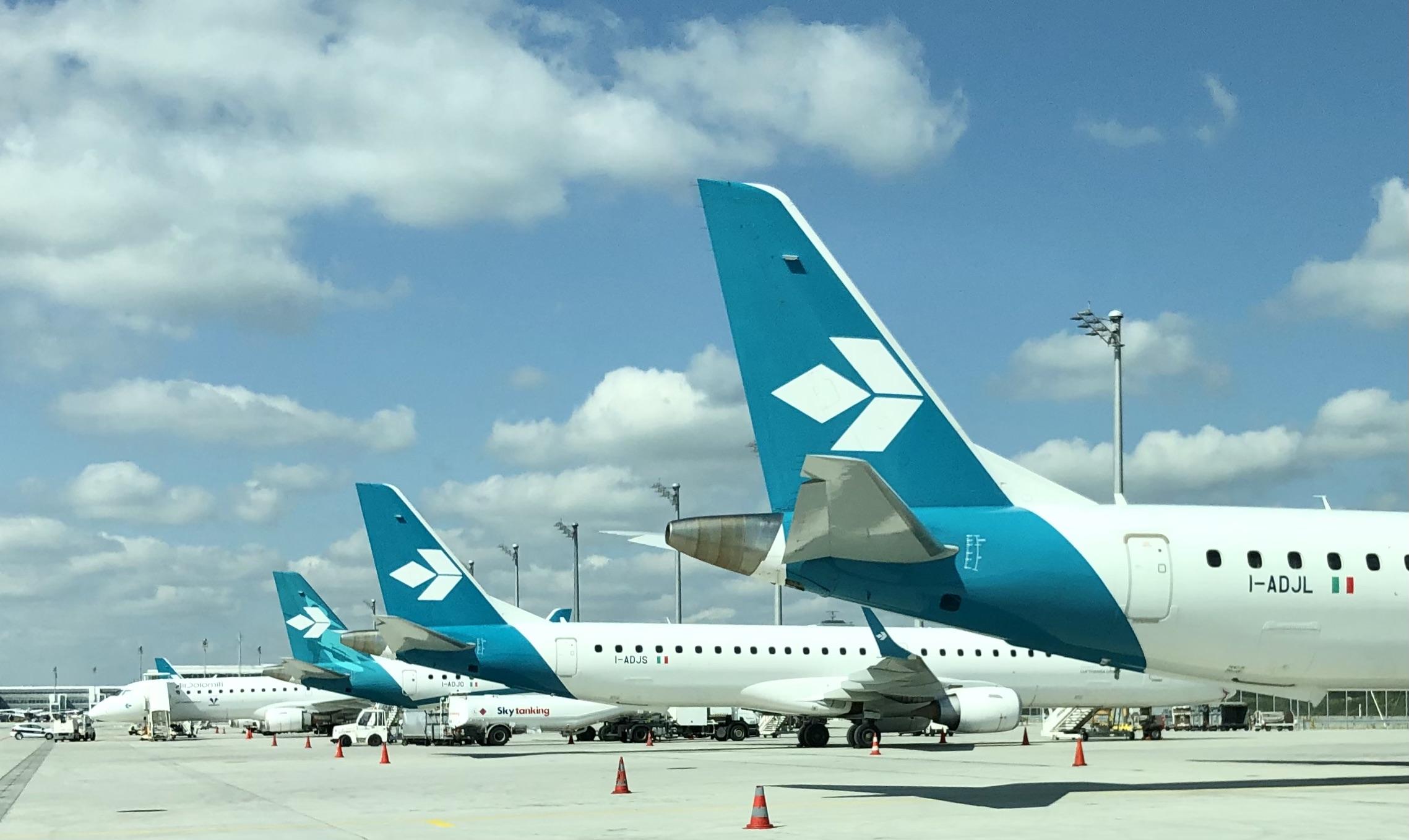 Italian carrier Air Dolomiti, a Lufthansa Group subsidiary, will add two Embraer E195s, bringing its E195 fleet to 17. The two aircraft, transferred from Lufthansa City Line, are scheduled for operations in March and May. 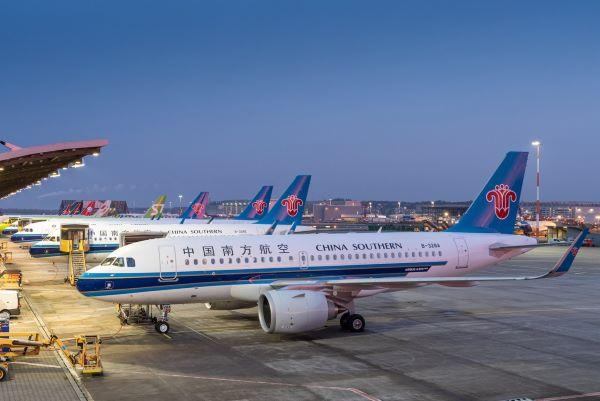 Taiwan-based Starlux Airlines took delivery of its first of eight Airbus A330-900s on lease from Air Lease Corp., which will begin operations in early summer. The 297-seat A330s are configured for 28 in business class and 269 in economy. 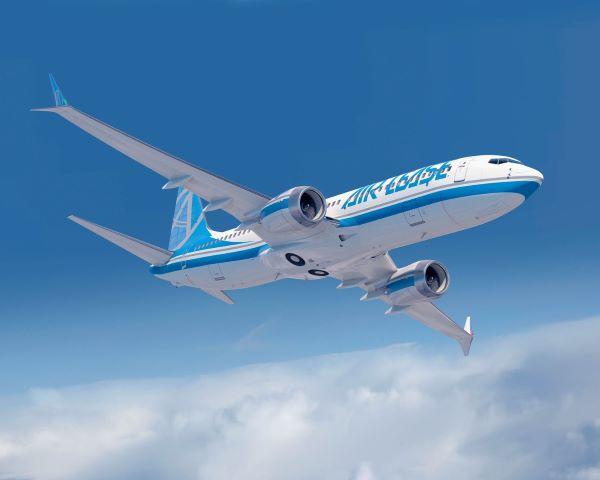 Air Lease Corporation (ALC) announced a new purchase of 50 Boeing 737 MAX aircraft, citing continued strong narrowbody demand and building on a recent large order for more than 100 aircraft single-aisle jets. The new order consists of 32 incremental 737 MAX aircraft—an unspecified mix of 737-8s and 737-9s—and 18 additional 737s that were converted from three existing 787 orders. Deliveries of the new aircraft are scheduled to begin in 2024 and run through 2026.

Saudi Arabia-based flynas took delivery of the first of up to five Airbus A320neos in a sale/leaseback transaction with CDB Aviation. 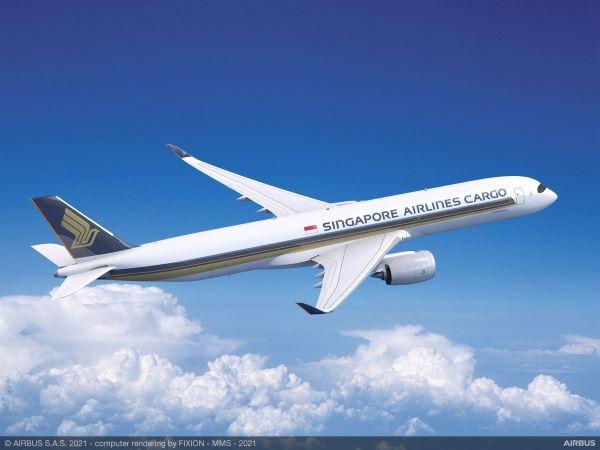 Singapore Airlines (SIA) inked the purchase agreement for seven Airbus A350 freighters, finalizing a LOI inked in December 2021. The flag carrier also revealed that it was actively in discussions and providing feedback to Airbus on the development of the freighter to better meet its operational requirements before the pandemic. The agreement includes a swap with 15 A320neos and two A350-900, and still remains an option for five A350Fs. 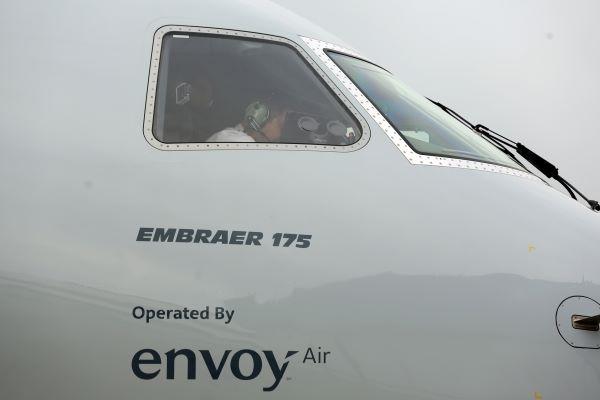 American Airlines has signed a firm order with Embraer for three new E175s. The aircraft will be operated by American’s wholly owned subsidiary, Envoy Air. With deliveries to be completed this year, Envoy’s fleet of E175s will grow to over 100 aircraft by the end of 2022. The contract value is USD 160.2 million at current list prices and will be included in Embraer’s 2021 fourth quarter backlog. 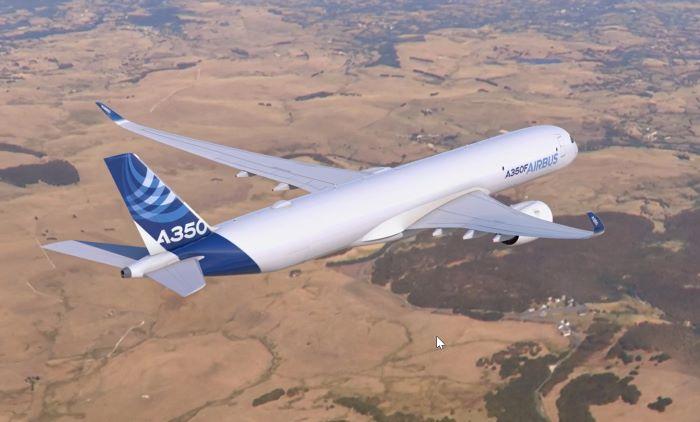 Etihad to add A350 freighters

Etihad Airways signed a LOI for seven Airbus A350F freighters to add to its existing fleet of five A350-1000 passenger versions. Etihad has also selected Airbus’s Flight Hour Services (FHS) to support its entire A350 fleet. 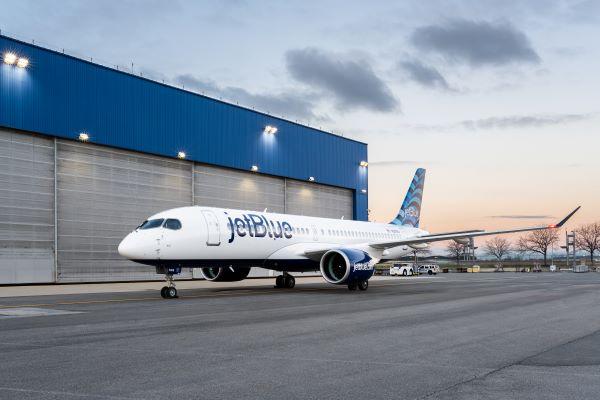 JetBlue Airways has agreed to exercise its option to add 30 additional Airbus A220-300 aircraft to its order book, bringing the total number of A220s in the New York-based airline’s fleet and on order to 100. CEO Robin Hayes said, “With 30 additional A220s on order, we’re in a position to accelerate our fleet modernization plans to deliver stronger cost performance and support our focus city network strategy.” 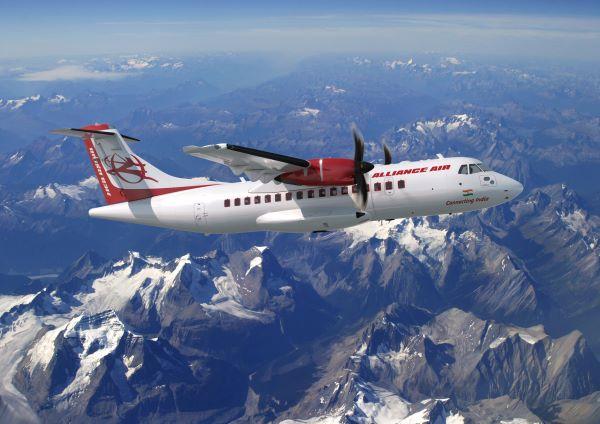 ATR and India’s Alliance Air signed a deal to acquire two ATR 42-600s via lessor TrueNoord. The new aircraft will join the airline’s fleet of 18 ATR 72-600s to operate on the challenging airfields in the Himalayas, which have short runways at Shimla and Kullu airports, both located at high altitudes and exposed to high temperatures. Deliveries will start in mid-2022. 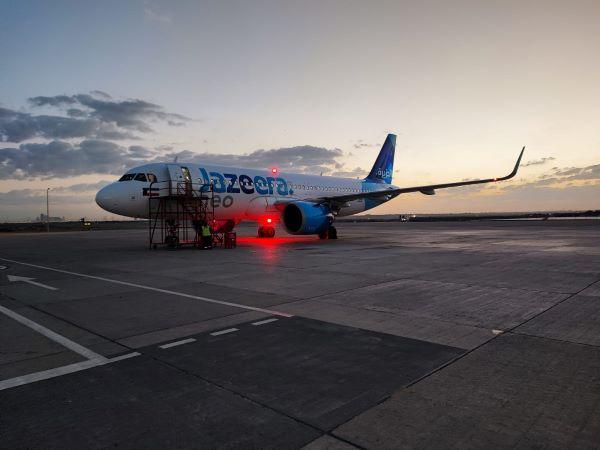 Kuwait-based Jazeera Airways firmed up an order with Airbus for 28 aircraft, including 20 A320neos and eight A321neos. The order confirms the MOU announced in November 2021. 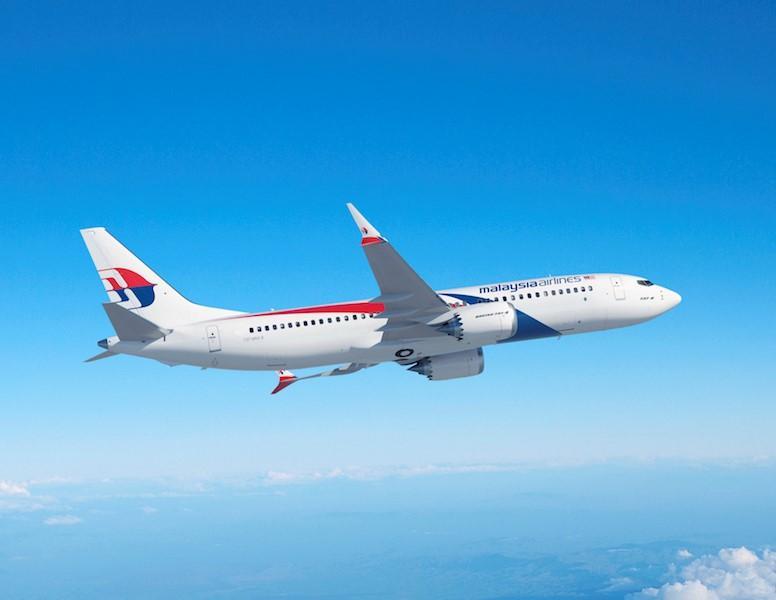 Air Lease Corporation announced long-term lease placements for 25 new Boeing 737 MAX-8 aircraft with Malaysia Aviation Group (MAG), parent company of Malaysia Airlines Berhad (MAB). The aircraft are scheduled to deliver to the airline starting in early 2023 through the beginning of 2026 from ALC’s orderbook with Boeing. ALC said the new aircraft will “help grow Malaysia Airlines’ expanding route network and improve operations and the efficiency of the airline’s fleet.” 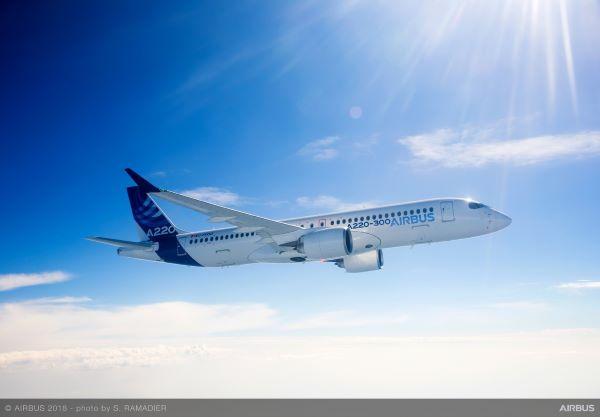 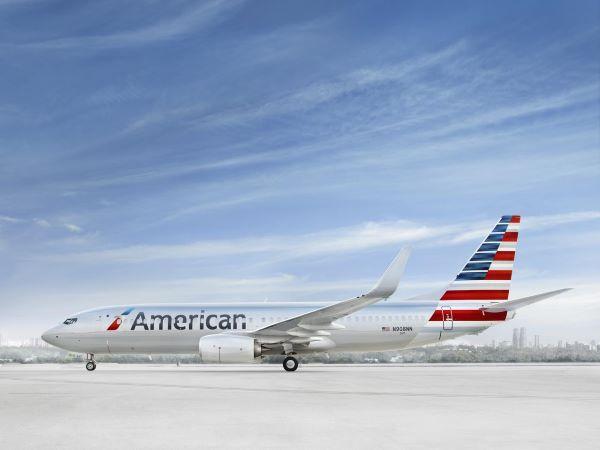 American Airlines converted options for 23 Boeing 737-8s to firm orders, and says it plans to convert seven more in 2022, increasing its total backlog to 55 MAXs for delivery in 2022-2024. It is also deferring delivery of certain number of 787-9s previously scheduled to start in January 2023 to 4Q23 through 2027. 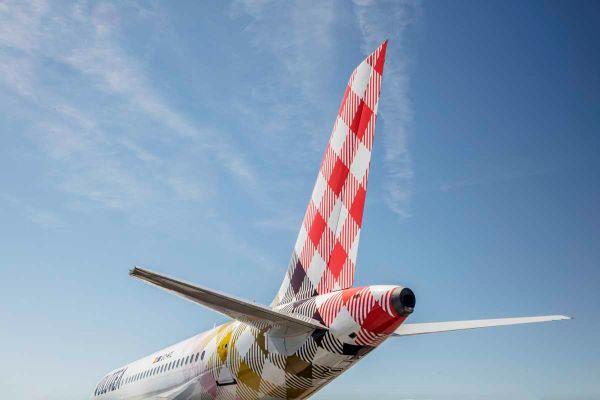 GOAL Aircraft Leasing delivered the last of three Airbus A320-200 aircraft to Volotea in Spain. All three aircraft are held by APF 1, a fund owned by German institutional investors, which has been initiated by KGAL, an independent investment and asset manager with headquarters in Germany. The underlying operating leases to Volotea will be managed by GOAL Aircraft Leasing. 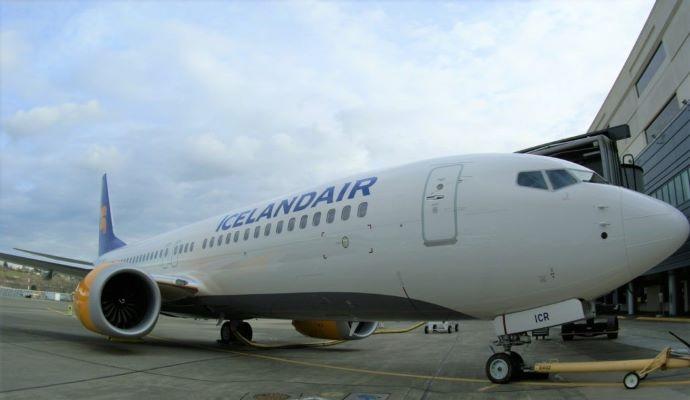 Aviation Capital Group (ACG) delivered one new Boeing 737-8 MAX aircraft on long-term lease to Icelandair. This Boeing 737 MAX aircraft, powered by CFM International’s LEAP-1B engines, is part of a multi-aircraft transaction between ACG and the airline. 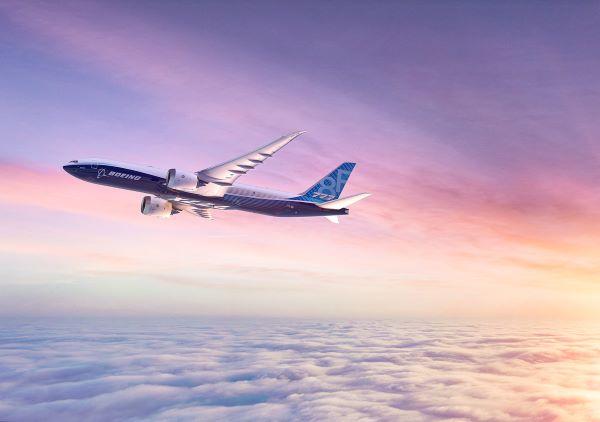 Qatar Airways placed a launch order with Boeing for 34 777-8Fs (pictured), and 16 options, for delivery starting in 2027, in a deal worth more than $20 billion at current list prices. The aircraft has range of 4,410 nm/revenue payload of 112.3 tonnes. The Doha-based carrier also ordered two more 777Fs. In addition, Qatar Airways signed an MOU to order 25 737-10s and take 25 purchase rights. 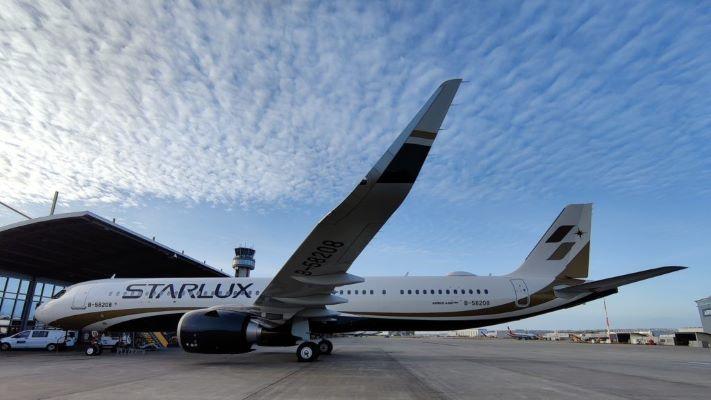 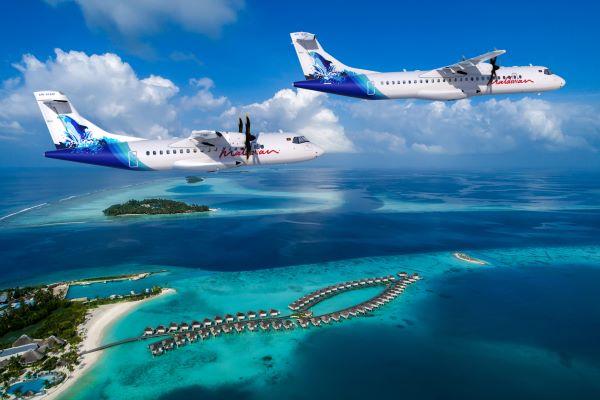 The national airline of the Maldives, Island Aviation Services (Maldivian) agreed to purchase the airline’s first ATR aircraft, two ATR 72-600s and one ATR 42-600s, to replace its aging turboprop fleet. The three aircraft will be delivered in 2022. 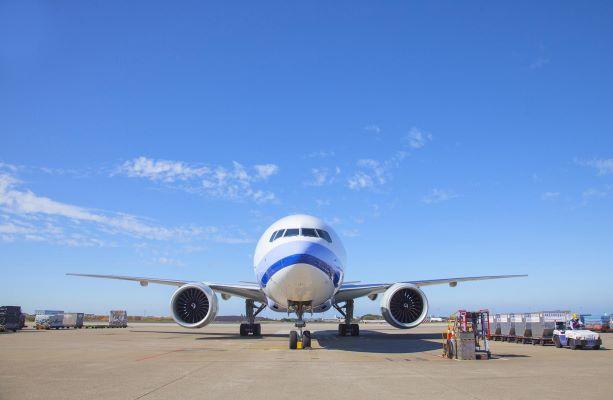 China Airlines (CAL) is acquiring four more Boeing 777 freighters as the Taiwanese airline sees the air cargo boom continuing and wants to consolidate its market position. Two of the previously ordered 777Fs will arrive this year with the third to follow in 2023. Deliveries from the latest order will run across 2023 and 2024. CAL has three 777Fs in service and already had three on order from a contract signed at the 2019 Paris Air Show. The latest purchase brings CAL’s total 777F backlog to seven. 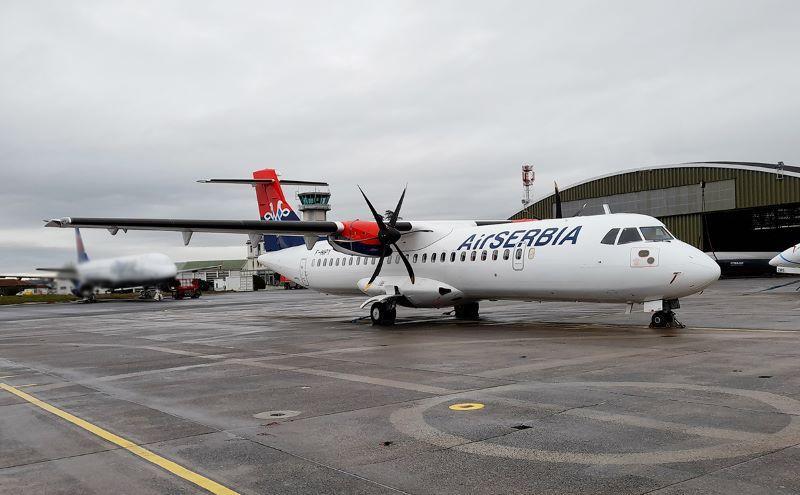 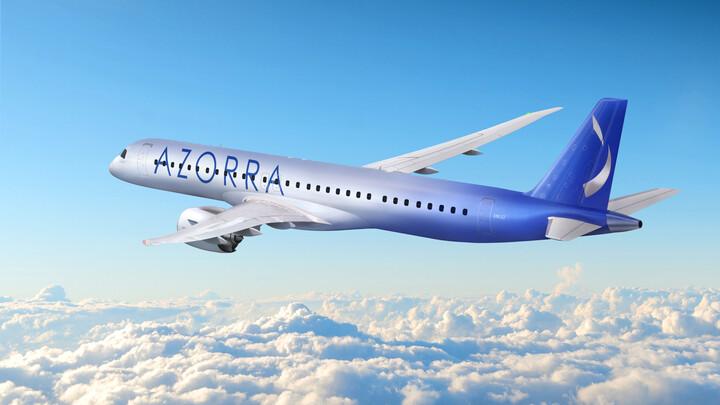 Azorra has signed an agreement with Embraer to acquire 20 new E2 family aircraft, plus a further 30 purchase rights. This flexible deal enables Azorra to acquire E190-E2 or E195-E2 aircraft. At list prices, the order is valued at $3.9 billion. Azorra is a Florida-based aircraft leasing company specializing in executive, regional and crossover aircraft. Deliveries will begin in 2023, adding a further 20 Embraer aircraft to the 21 already in Azorra’s existing and committed portfolio. 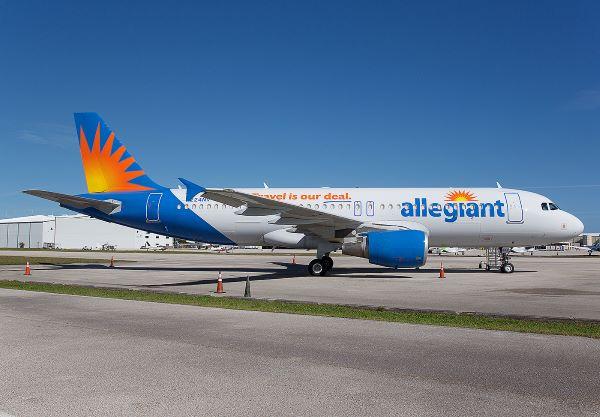 Aircraft Leasing & Management (ALM) has arranged the lease of two further A320-214 aircraft to Las Vegas-based ULCC Allegiant Air. The two aircraft were previously operated by Japan’s Peach Aviation and All Nippon Airways (ANA). The leases are finance leases and Allegiant maintains an option to purchase the aircraft at the end of the term for a specified amount. The transactions closed during the second half of 2021.

Dubai Aerospace Enterprise (DAE) completed the placement of 14 Boeing 737 MAX 8 aircraft with two customers, Aeroméxico and Icelandair. Aeroméxico will receive 12 of the type and Icelandair will receive two. Deliveries began in October 2021 and all aircraft are scheduled for delivery before the end of the first half of 2022. 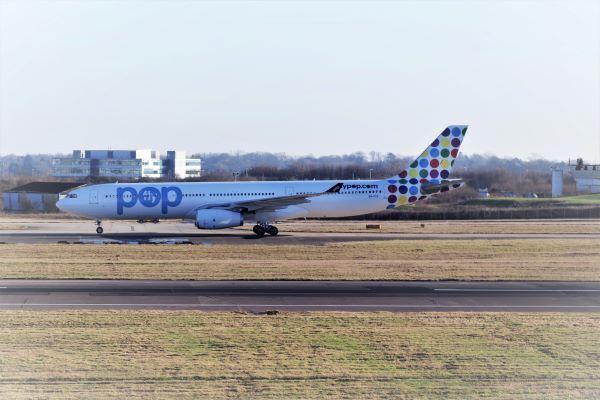 Long-haul low-cost UK-India startup flypop expects to begin passenger operations this summer, after receiving its second Airbus A330, with another two scheduled to follow over the coming months. London Stansted-based flypop plans to serve the UK-India VFR market, flying to Indian secondary cities such as Ahmedabad, Amritsar, Chandigarh, Goa, Hyderabad, Kochi and Kolkata. 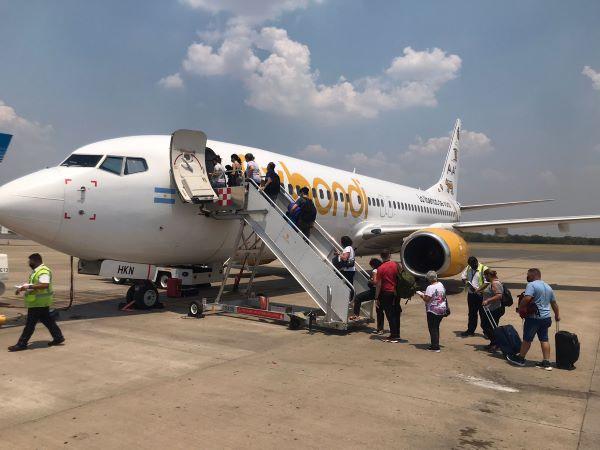 Argentina-based LCC Flybondi took delivery of its fifth Boeing 737-800NG, with 189 single-class seats, and began flying to the province of Tierra del Fuego with the Buenos Aires-Ushuaia route. Flybondi operates from Aeroparque and Ezeiza.

The aviation industry is looking forward to a brighter 2022. As airlines and lessors hope for a continued pandemic recovery, more companies are investing in new aircraft. Here’s a look at some of the latest deals.