Gallery: Networks Maps: Then And Now 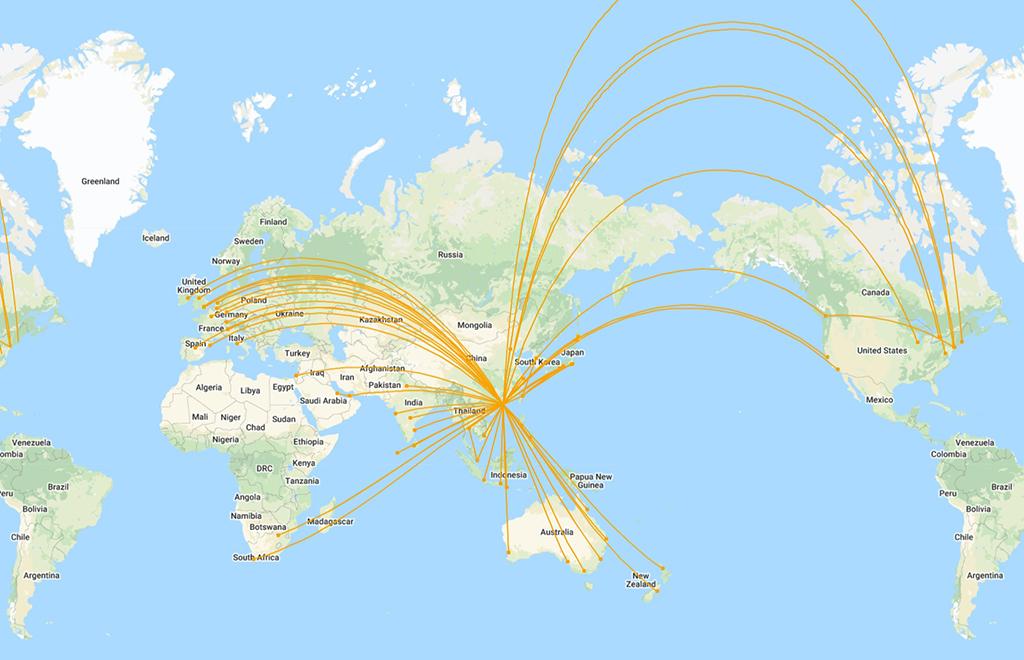 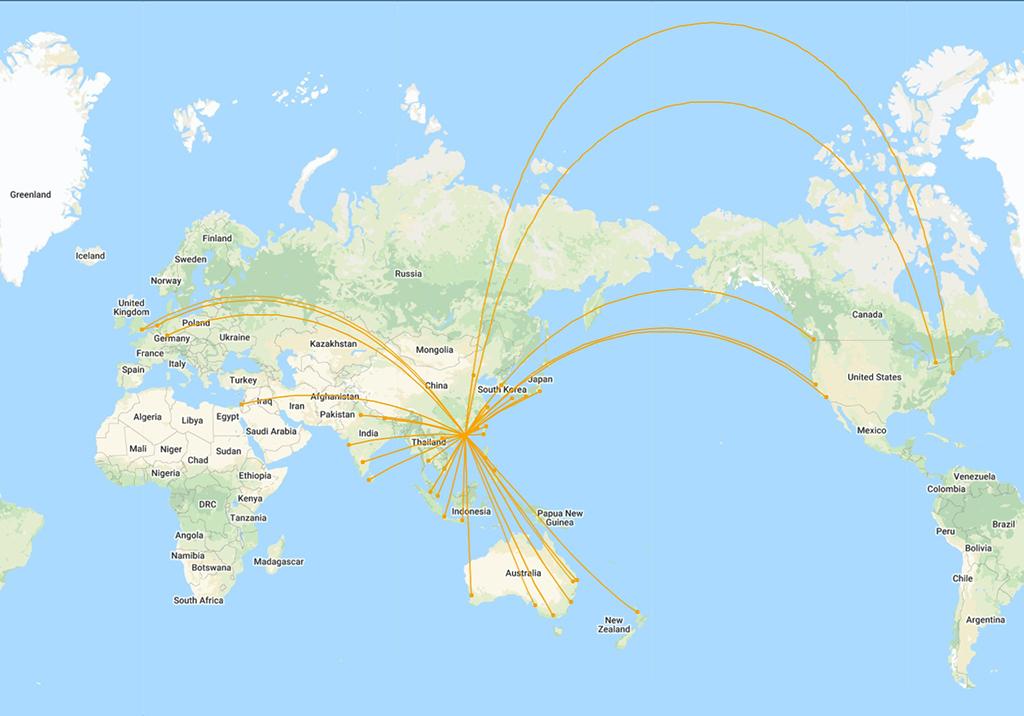 In 2021, total capacity had fallen to 402,805 scheduled departure seats, while total network points had fallen by almost a third to 40 destinations. Many points in Australia were removed due to restrictions, but the airline added locations such as Hanoi, Vietnam and Fukuoko, Japan. 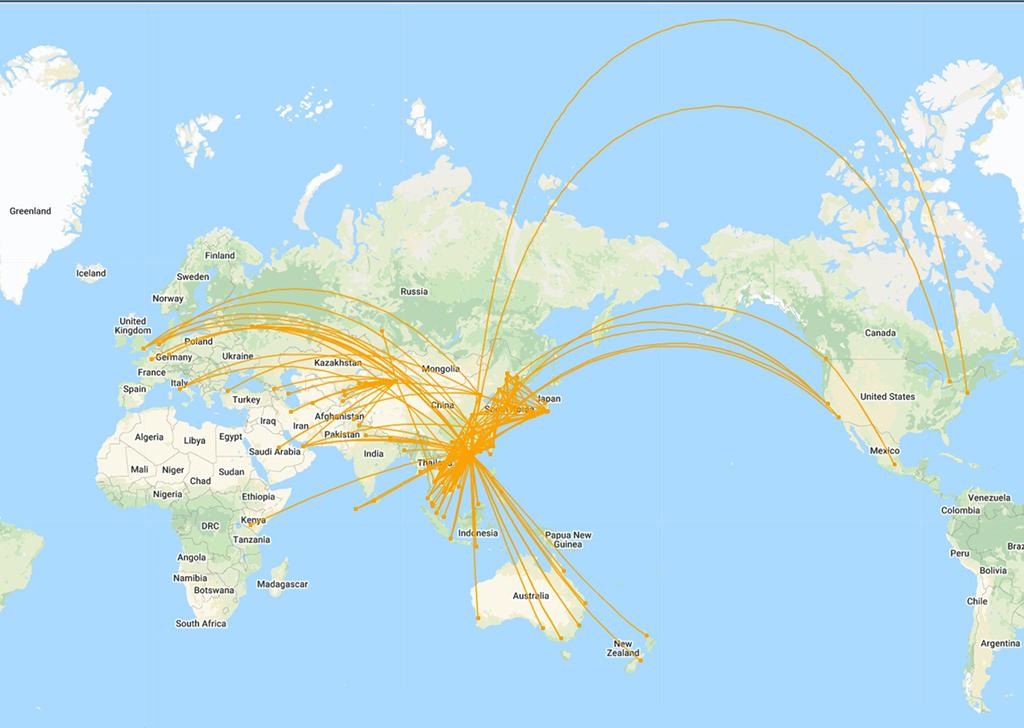 Asia’s largest carrier by total capacity offered 10,866,654 scheduled departure seats in February 2019, led by its hubs in Guangzhou, Beijing and Shenzhen and serving 217 destinations in total. More than 16 million seats were available from Guangzhou alone. 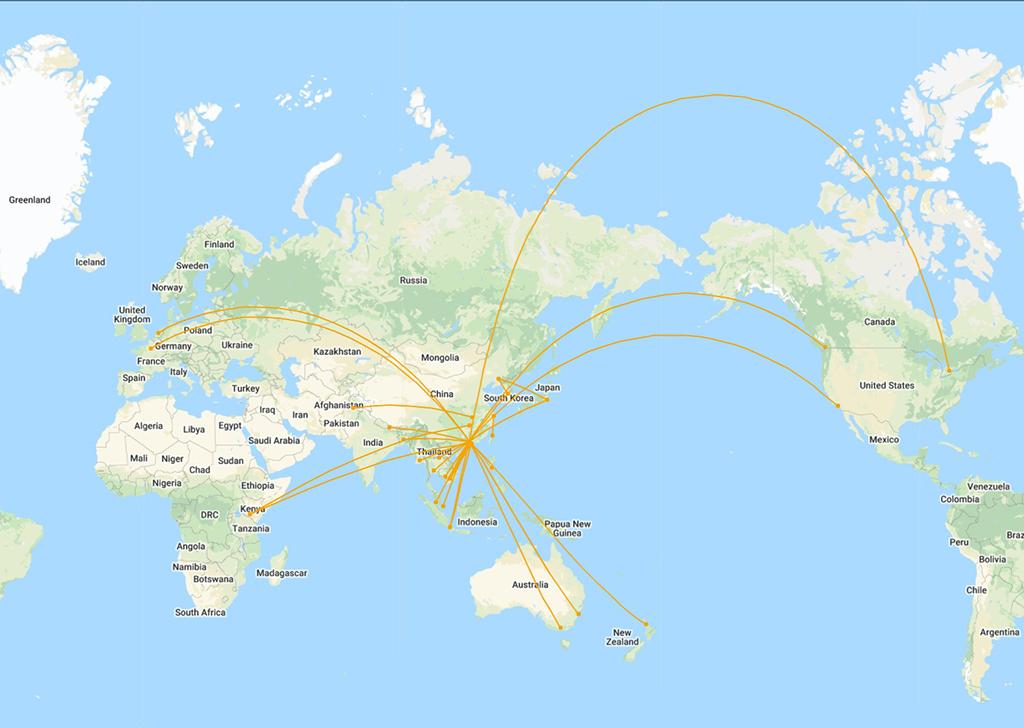 In the same month this year, despite China’s resilience against COVID-19, the carrier served 171 destinations and its total capacity had fallen to 6,489,399 scheduled departure seats.

Two years ago there were 47 market pairs between China and the US, offering 353,756 scheduled seats. The largest two routes by total scheduled capacity were Los Angeles International to Shanghai Pudong and Beijing, followed by pairings between the same Chinese cities and fellow US west coast base San Francisco. 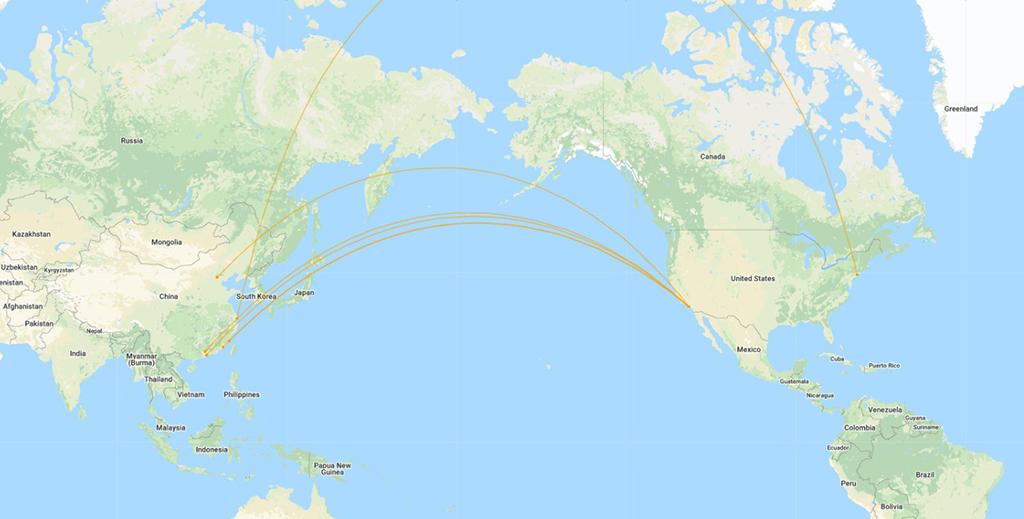 Just six market pairs remain between China and the US, accounting for 14,368 departure seats. Los Angeles remains the hub for the two largest routes, but Guangzhou and Xiamen are the connection points in China. New York JFK is the only other US airport with a China service in February 2021.

US to Western Europe, February 2019

In February 2019 there were 2,624,727 total departure seats available between the US and Western Europe over 244 services, led by the New York JFK to London Heathrow service. Heathrow also had the second largest route to Los Angeles International, while a JFK link to Paris Charles de Gaulle was the third-largest route.

US to Western Europe, February 2021

There are now 95 scheduled links between the US and Western Europe, with 613,354 available departure seats. New York JFK to London Heathrow remains the largest route, with the Paris Charles de Gaulle to JFK service in third. However, Amsterdam Schiphol to Atlanta Hartsfield-Jackson is now the second-largest route with 24,948 available seats. 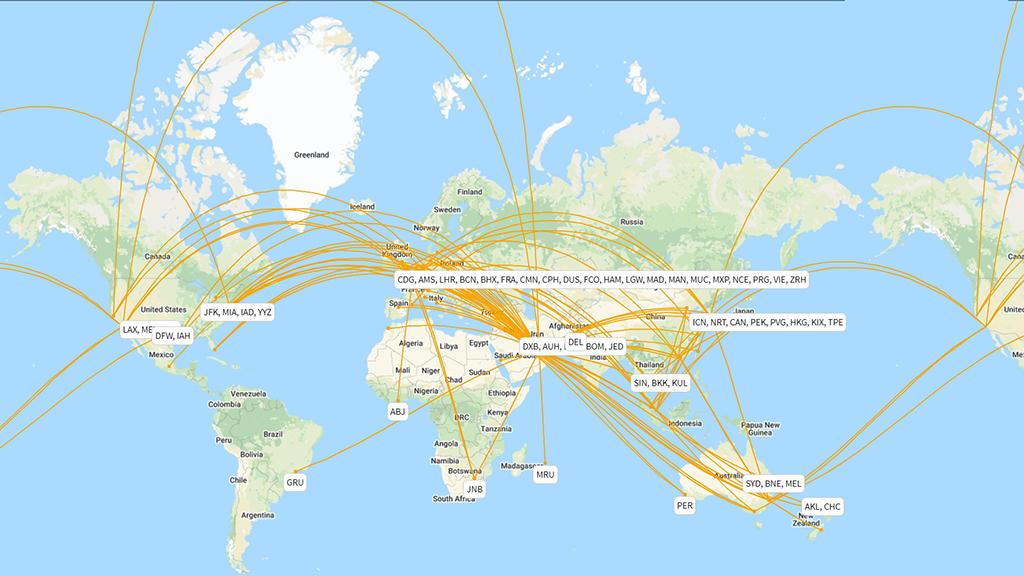 The Airbus A380 was deployed on 115 scheduled passenger routes globally during February 2019, with 13 airlines using the aircraft type. Of the 4.36 million available A380 seats during the month, 2.29 million of those were on board Emirates Airline. Dubai-London Heathrow was the biggest A380 route by capacity, accounting for more than 170,000 two-way seats.

With much of the world’s A380 fleet grounded or mothballed, the aircraft was deployed on just 17 routes in February 2021. Only four carriers used the aircraft—Emirates, China Southern Airlines, Korean Air and Asiana Airlines—with Emirates operating 84% of the 154,000 worldwide A380 seats available. Capacity between Dubai and London Heathrow—the world’s biggest A380 route in February 2019—was just 6,200 seats. 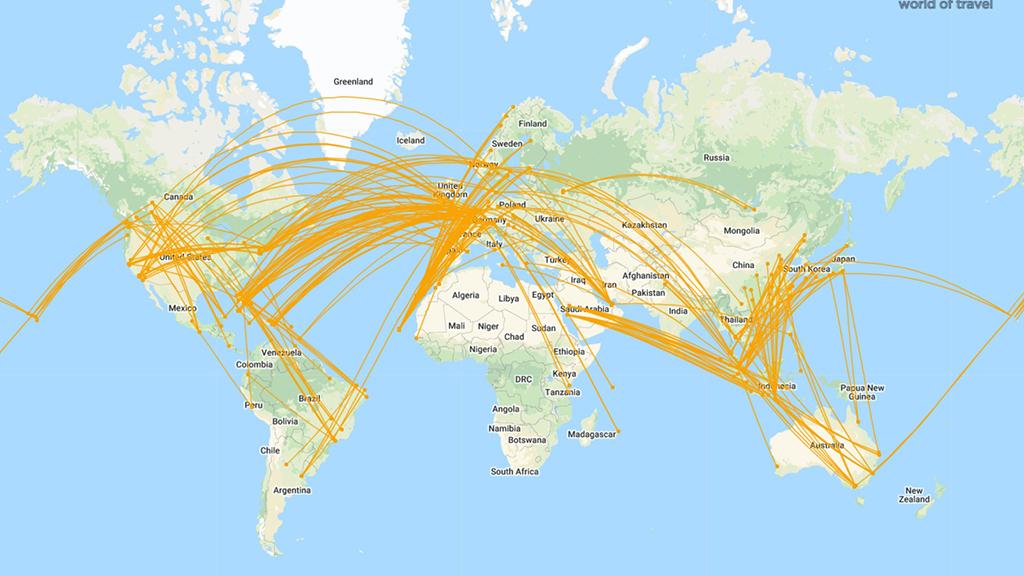 Ongoing international travel restrictions and changing airline network strategies curtailed the number of long-haul low-cost routes to just 50 in February 2021. The number of low-fare seats being offered worldwide between long-haul destinations was 232,145—a reduction of 90% compared with the same month in 2019.

Routes with over 100 weekly frequencies, February 2019

A total of 1,463 routes had more than 100 two-way weekly frequencies during, February 2019—79% of which were domestic services. The world’s busiest passenger route, connecting Seoul Gimpo and the vacation island of Jeju, had more than 1,500 weekly flights, which equates to one service every 15 minutes on average. Kuala Lumpur-Singapore was the biggest international route by frequencies during the month. 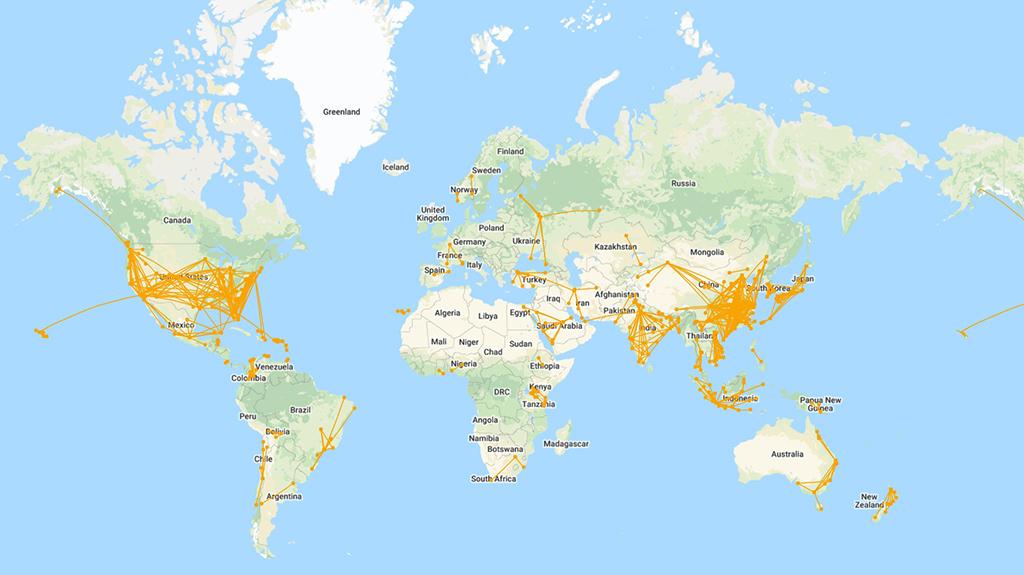 Routes with over 100 weekly frequencies, February 2021

By February 2021, the number of routes with more than 100 two-way flights per week had fallen to 613. Seoul Gimpo-Jeju remained the biggest route in the world by frequencies—with the number of flights largely unchanged from February 2019—although there were large reductions elsewhere. Melbourne-Sydney, the second largest route two years ago, had lost 600 weekly services. 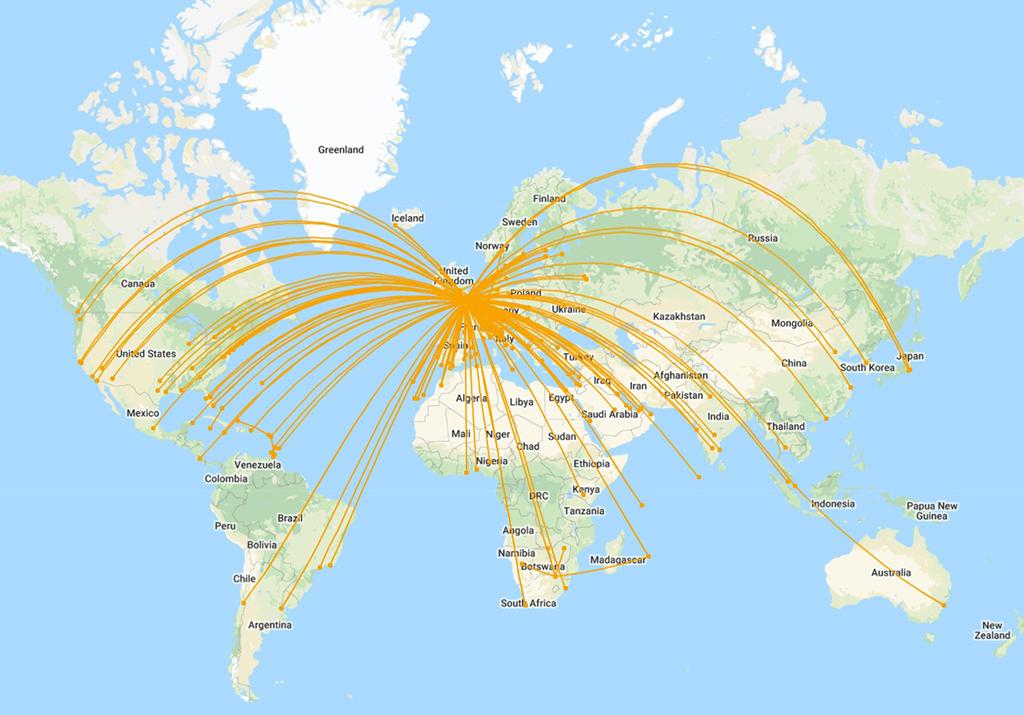 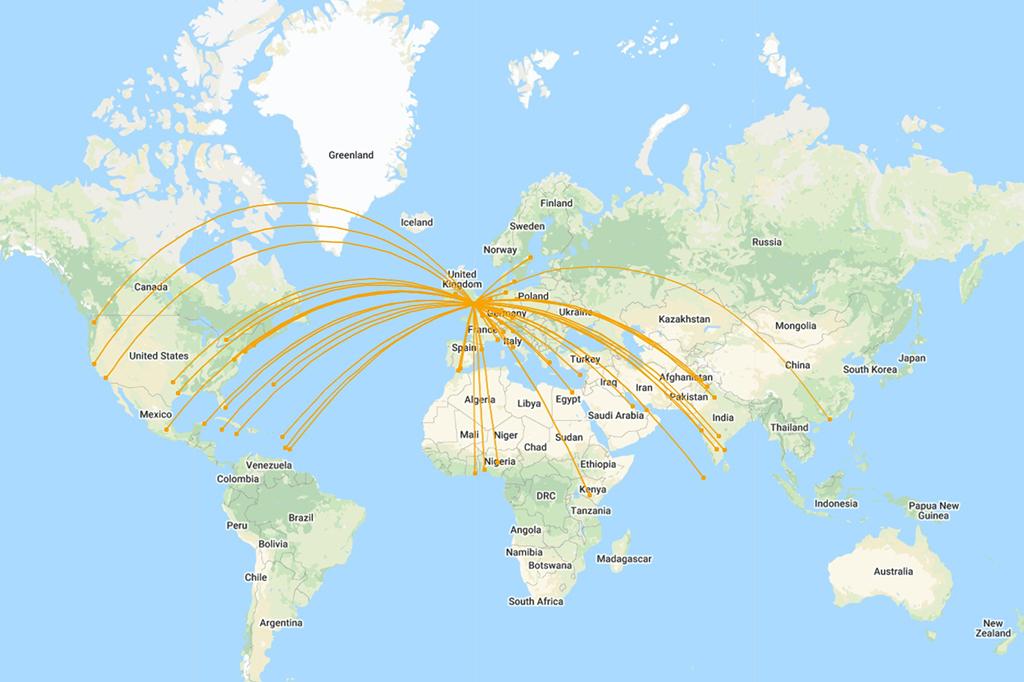 British Airways’ international capacity totaled 309,761 seats in February 2021, down by 80% compared with two years previous. About 53 international routes operated during the month, 47 of which originated at London Heathrow. Only five were from London Gatwick and one from London City.

With COVID-19 reshaping the world’s skies, we take a look at some of the key networks and market pairs that have been affected by the pandemic.