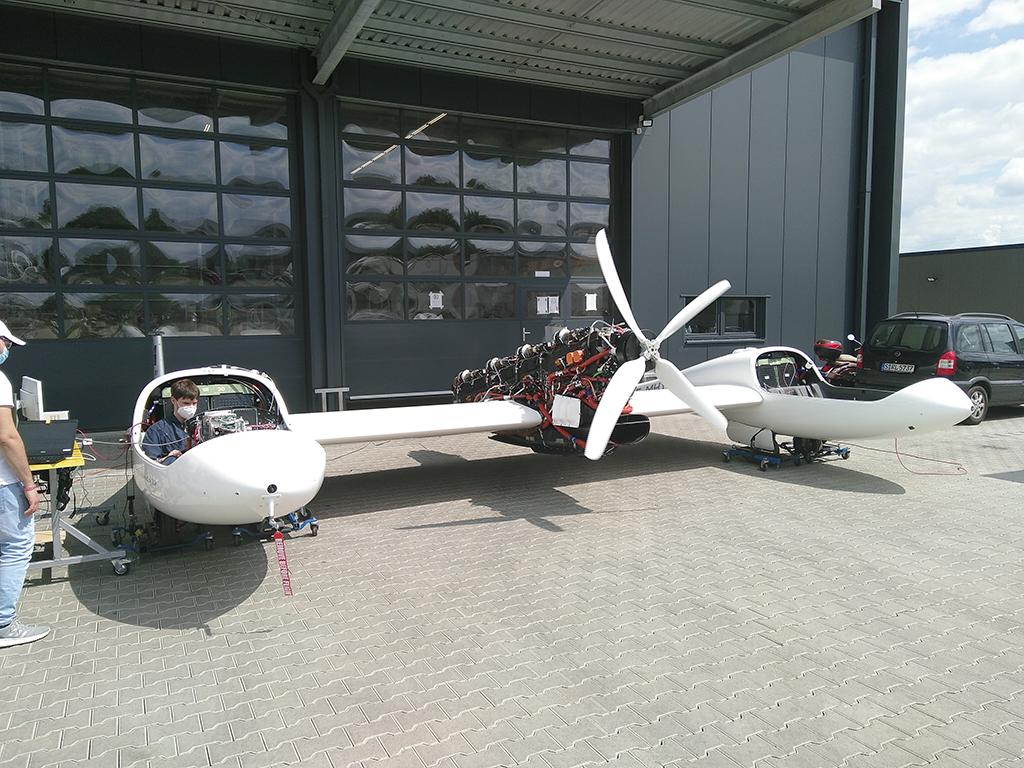 Working with DLR and aircraft operator HY2Fly, the Mahepa fuel-cell power train was ground-tested in the HY4 at Ulm University in Germany.

The Mahepa (Modular Approach to Hybrid-Electric Propulsion Architecture) program is developing and flight-testing component technologies on two different aircraft that can be combined to create different forms of power train. The program is led by Slovenian electric-aircraft developer Pipstrel. A four-seat HY4 has been fitted with a hydrogen fuel-cell version of the power train. In the HY4, the electric drive has been combined with a fuel-cell system. In the second aircraft, a modified four-seat Pipistrel Pathera, the electric drive is combined with a battery that is integrated into the wing and cooled by fuel and an internal-combustion engine running on biofuel as a range extender. Credit: Mahepa Project 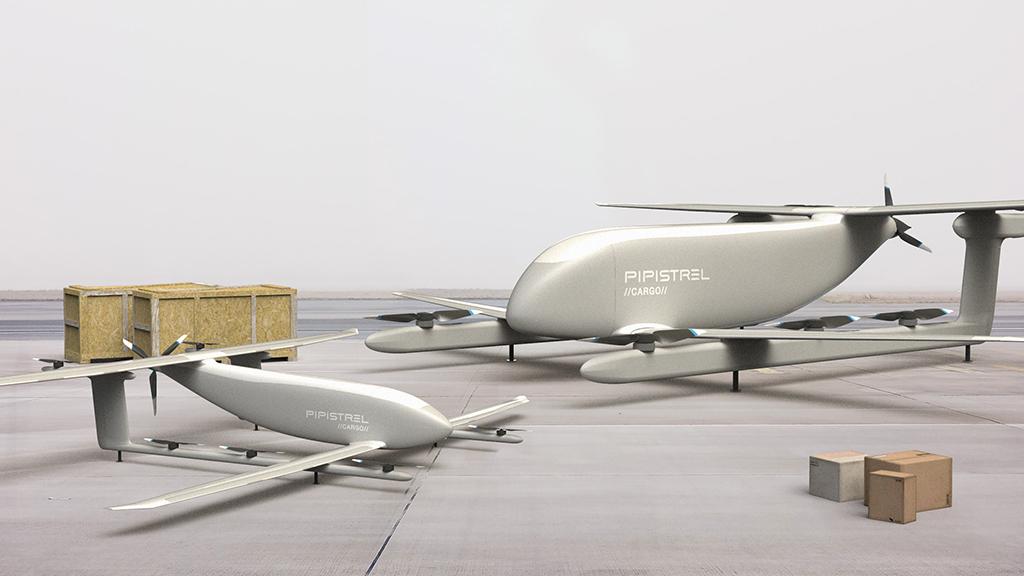 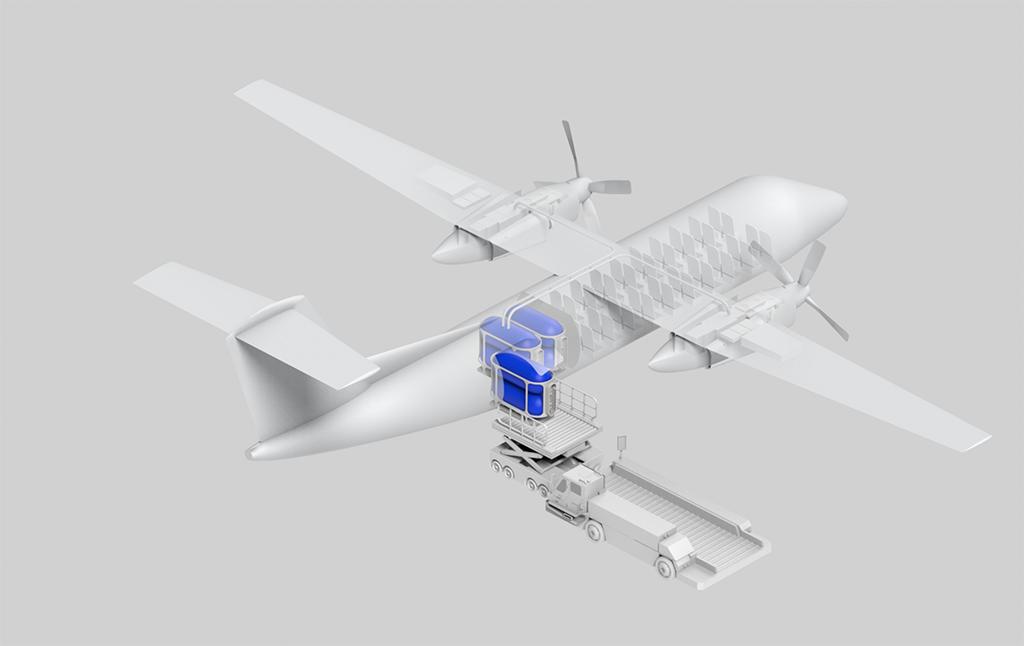 Plug Power will develop the fuel-cell power system for startup Universal Hydrogen’s planned conversion of the De Havilland Canada Dash 8-300 regional turboprop to zero-emissions hydrogen-electric propulsion. Latham, New York-based Plug Power will develop a version of its ProGen hydrogen fuel-cell stack that is suitable for aircraft application. ProGen is used in electric trucks in sizes up to 100 kW. The 2-megawatt system for the Dash 8 will use multiple ProGen modules in parallel, Plug Power CEO Andy Marsh says. The propulsion-system modification, for the ATR 42/72 family and the Dash 8, will comprise Universal Hydrogen’s pressurized-gas or liquid hydrogen modules, loaded into the rear fuselage, the fuel-cell power system, and a 2-megawatt electric drive being developed by MagniX. Credit: Universal Hydrogen concept 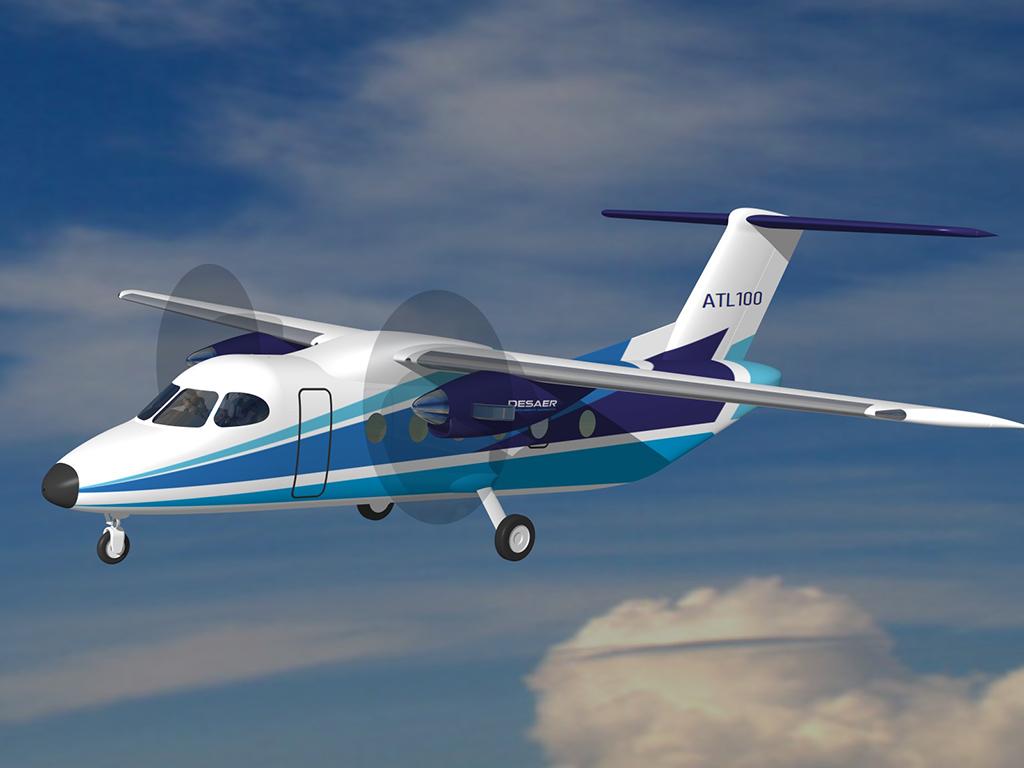 The ATL-100 is intended as a successor to Embraer’s Bandeirante and a competitor to Viking’s Twin Otter and Cessna’s SkyCourier.

Joint-venture (JV) partners CEiiA of Portugal and Desaer of Brazil plan to roll out the first of four ATL-100 prototypes at the end of 2023, with entry into service at the end of 2025 or beginning of 2026. Airports at Beja and Ponte de Sor in the Alentejo region are being considered as factory sites. CEiiA and Desaer signed the JV agreement in May. With a maximum takeoff weight of 19,000 lb. and a range of more than 1,600 km (865 nm) at 230 kt., the high-wing, fixed-gear ATL-100 is designed to carry 19 passengers, three LD3 cargo containers or 12 fully equipped paratroopers. Power comes from two 1,000-shp-class turboprop engines. Credit: Desaer 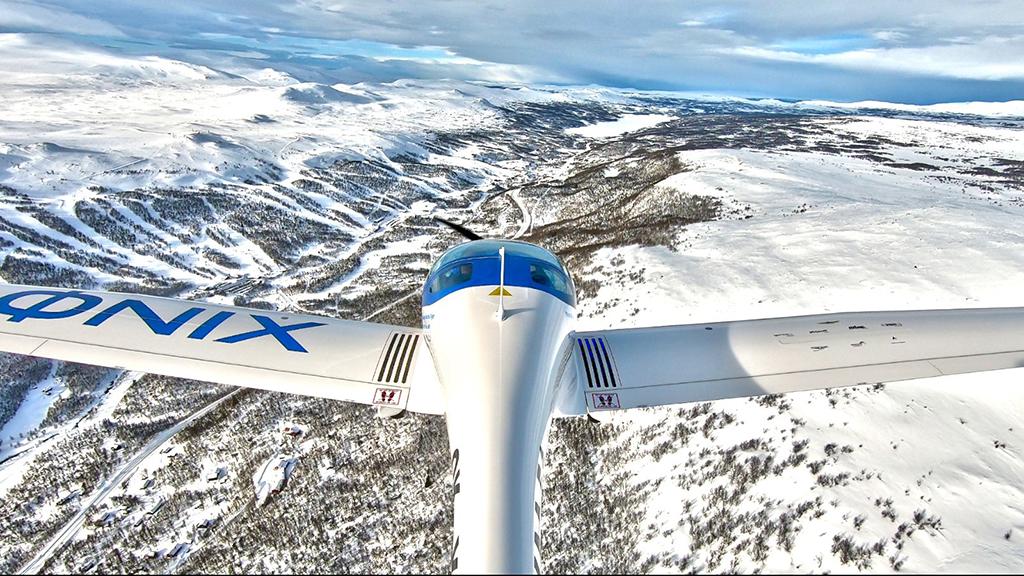 PureFlight conducted the first cross-border electric flight earlier this year from Sveg in Sweden to Roros in Norway.

Sweden opened facilities to test electric and unmanned aircraft at Are Ostersund Airport under a European Union-supported cross-border project with Norway. The Green Flyway project is creating an international test area linking Are Ostersund and Sveg Harjedalen Airports in Sweden with Roros and Trondheim Airports in Norway. The cross-border test area is intended to support efforts by Norway and Sweden to begin zero-emissions commercial flights by 2030. Norway has committed to all domestic flights being electric by 2040, while Sweden’s goal is for all domestic flights to be fossil-free by 2045. Financed by the EU’s Interreg program, Green Flyway brings together Swedish airport operator Swedavia and its Norwegian counterpart Avinor. Partner’s include the respective countries’ civil aviation authorities and transport ministries as well as universities, research institutes and airlines. Credit: PureFlight

Unmanned cargo aircraft developer Sabrewing Aircraft signed an exclusive representation agreement with Riyadh-based trading company Arabian Development & Marketing Co. (ADMC) covering sales in Saudi Arabia, the Gulf Cooperation Council countries and Pan-African region. The agreement includes conditional orders for 102 Rhaegal-B heavy-lift VTOL unmanned cargo aircraft. The deal with ADMC also includes establishing aircraft assembly and MRO facilities in Saudi Arabia and Africa to service the Rhaegal-B fleet. The Rhaegal has a hybrid-electric propulsion system driving four tilting ducted fans that provide thrust for vertical flight and wingborne forward flight. Sabrewing has built a Rhaegal-A technology demonstrator, but first flight has been delayed by COVID-19 restrictions. The planned Rhaegal-B production aircraft is larger, designed to deliver 5,400 lb. of VTOL payload over a range of up to 1,000 nm. Flying at altitudes up to 22,000 ft., the aircraft would be remotely piloted for commercial operations and fully autonomous in military use. Under the deal, ADMC will offer customers production-line positions, secured by deposits, for deliveries beginning in autumn 2021. Credit: Sabrewing Aircraft 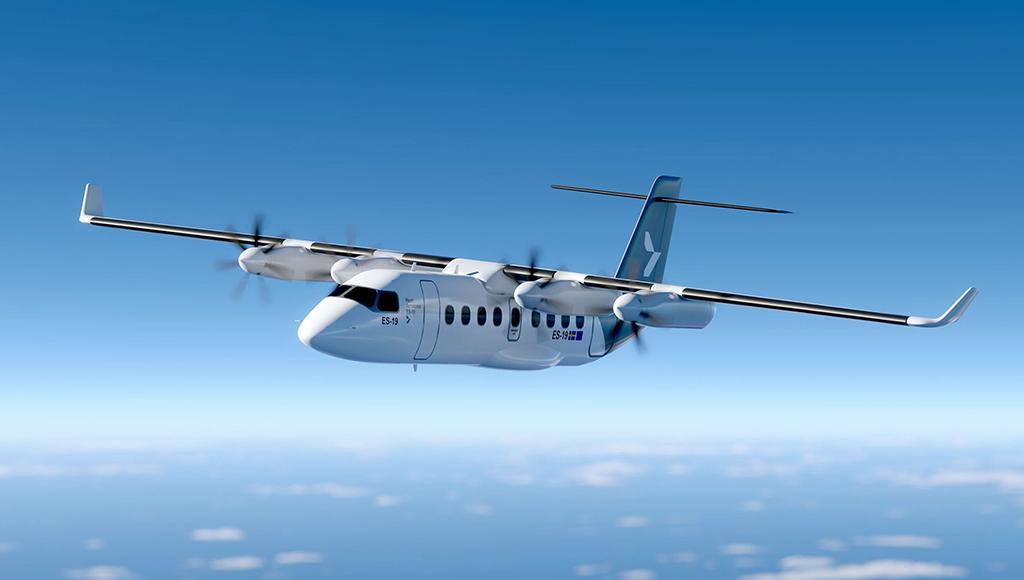 Swedish startup Heart Aerospace unveiled the electric propulsion system for its planned 19-seat regional airliner, the ES-19. The company began ground tests of the motor, motor controller and battery pack—developed internally with supplier partners—on a test rig at Gothenburg’s Save Airport. The high-wing ES-19 has four propulsion-system nacelles, each housing a dual-redundant lithium-ion battery pack, dual controllers and the motor, which has dual windings for redundancy. The ground-test rig represents a single propulsion nacelle, including propeller. The slow-turning, low-noise seven-blade propeller is supplied by Germany’s MT-Propeller. The inner one-third of a propeller does not generate much thrust, so Heart has taken advantage of the size of the propulsion nacelle to enlarge the hub and reduce drag. The initial market is expected to be Norway, which has committed to all domestic flights being electric by 2040. A preliminary ES-19 design review is planned for mid-2022, leading to a prototype flying in mid-2024. Credit: Heart Aerospace 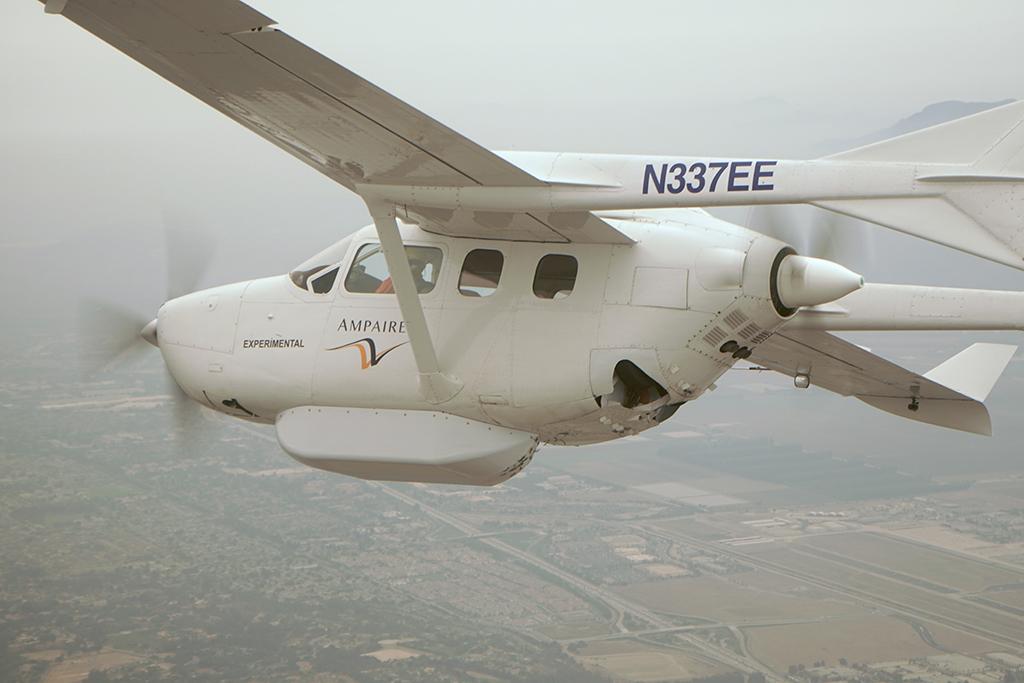 Batteries have been relocated to an under-fuselage canoe to free up cabin space.

Ampaire flew a second prototype of its Electric EEL—a Cessna 337 Skymaster modified to parallel hybrid-electric propulsion—on a 341-mi. flight from Camarillo to Hayward, California. The startup company described it as “the longest flight to date for any commercially relevant aircraft employing electric propulsion.” The aircraft, Ampaire’s second prototype, will be partially disassembled for shipment to Hawaii. The EEL is planned to be test-flown on Maui, on routes operated by Hawaiian regional carrier Mokulele Airlines. California-based Ampaire modified the six-seat Cessna 337 by replacing the forward piston engine with an electric motor, powered by batteries housed in the cargo pod under the fuselage. The rear-mounted internal-combustion engine is retained. Credit: Ampaire 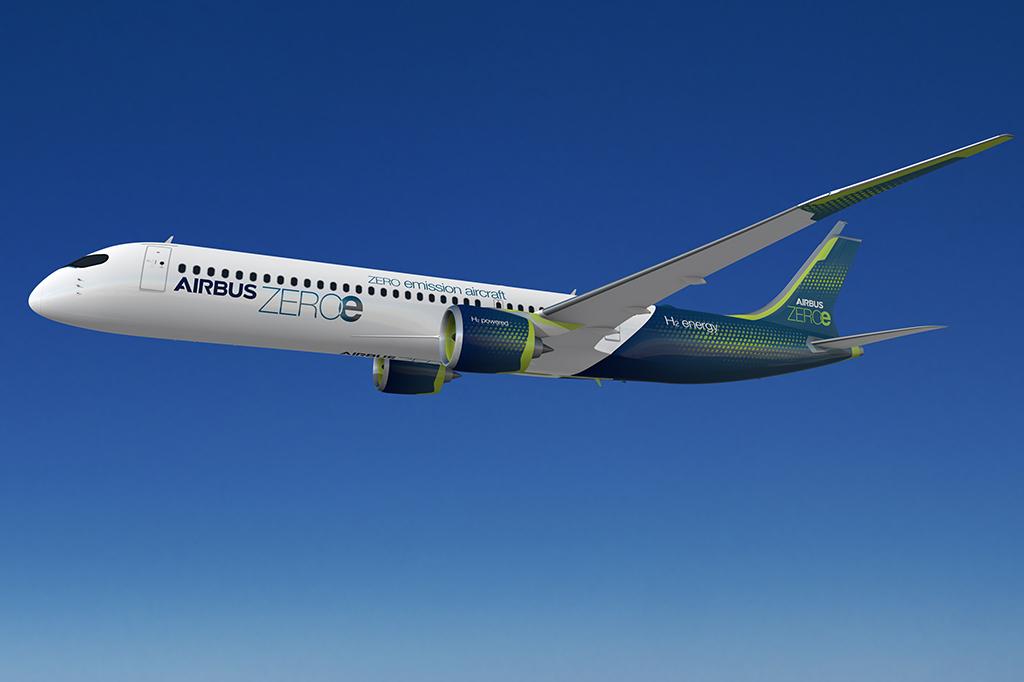 Fuel cells could be used for auxiliary and emergency power as well as hybrid-electric propulsion in future hydrogen-fueled airliners.

Airbus formed a joint company with German automotive fuel-cell supplier ElringKlinger to develop technology for zero-emission hydrogen-fueled aircraft. The partnership will develop aviation-compatible fuel-cell stacks, beginning with the delivery this year of stacks and a customized test rig. ElringKlinger will have a non-controlling interest in the newly established joint company, while Airbus will hold the majority stake. ElringKlinger will provide technology relevant to hydrogen fuel cells in return for “compensation in the low-to-mid double-digit million euro range.” Credit: Airbus

Italian aircraft manufacturer Tecnam has partnered with Rolls-Royce to develop the nine-passenger P-Volt, an all-electric version of the P2012 Traveler regional aircraft. Capua-based Tecnam said the program is supported by letters of intent from unspecified “North American and European airlines.” The first operator of the P2012 Traveler, U.S. regional airline Cape Air, already has an agreement with Israeli startup Eviation to participate in development of its nine-passenger Alice all-electric regional aircraft. The Alice prototype is planned to fly early in 2021. Tecam said the aircraft “will be the first commercial nine-passenger, cargo, medical evacuation and special mission aircraft to be electrified directly by the manufacturer.” The P-Volt will be proposed to the European Commission as part of the planned Clean Aviation follow-on to the Clean Sky research program, “and we are committed to see a certified product flying with passengers on scheduled commercial flights within the second half of [the] 2020s,” Tecnam told Aviation Week. Described as “short and medium range,” the P-Volt has two wing-mounted Rolls electric motors replacing the P2012’s 280-kW (375-hp) Lycoming TEO-540-C1A piston engines. A pannier installed under the fuselage likely houses a battery pack. Credit: Tecnam