When Will These Civil Aircraft Concepts Fly? 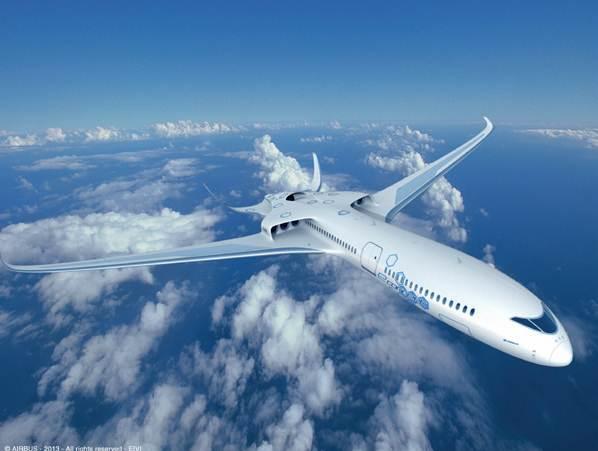 Developed with Rolls-Royce, E-Thrust is an Airbus concept for a future airliner with hybrid-electric distributed propulsion for reduced fuel consumption and emissions. The aircraft has a gas-turbine engine, energy storage system and electric ducted fans integrated into the airframe.

For takeoff and in the climb, the engine and energy storage system together provide peak power to the ducted fans. In cruise, the gas turbine powers the fans and recharges the batteries. On descent, the engine is switched off and the fans act as windmills to recharge the storage system. For landing, the gas turbine is restarted to ensure additional power is available for safety

In a departure for Airbus, its Silicon Valley outpost A³ plans to fly a full-scale prototype of an autonomous air taxi at the end of 2017. Project Vahana is developing an electric-powered, vertical-takeoff-and-landing aircraft with multiple propellers mounted on fore and aft tilting wings.

Vahana is designed to fly autonomously, carrying cargo or a single passenger over congested urban roads. If the prototype is successful, A3 plans to fly a production-representative demonstrator by 2020. Airbus is also working with Siemens to ready technology for a hybrid-electric airliner with under 100 seats by that time. 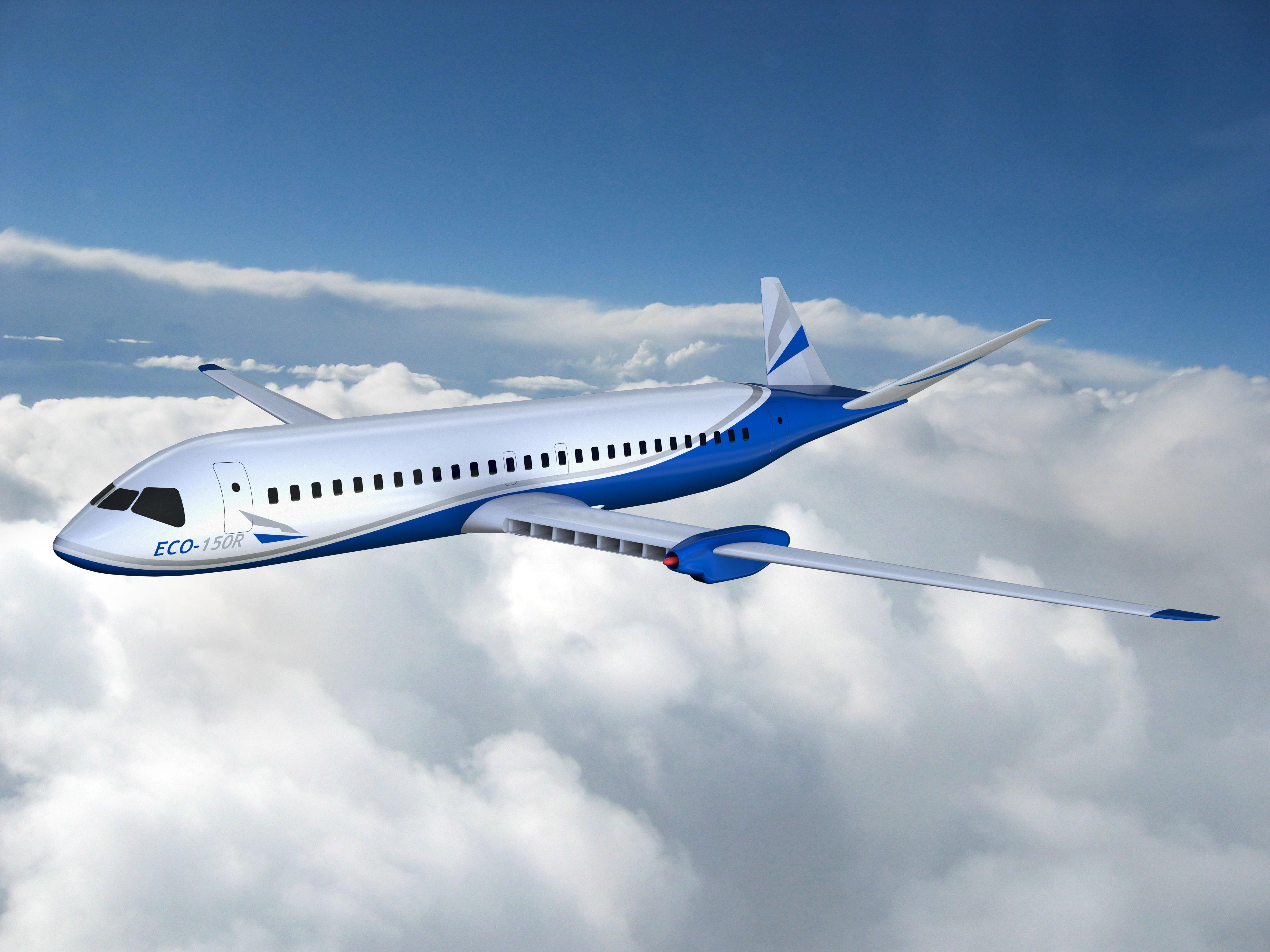 Entrepreneurial design company Empirical Systems Aerospace (ESAero) has developed the ECO-150 concept for an airliner with turboelectric distributed propulsion. The 150-seat ECO-150 has two turboshaft engines mounted mid-span on the wing, driving generators that power an array of 16 ducted fans embedded in the inboard split-wing sections.

Fuel savings of 20-30% over the Boeing 737-700 are projected for the conventional-electric ECO-150R version. The savings come from the effective increase in bypass ratio and propulsive efficiency with each turbine driving multiple fans. The split wing with its embedded propulsion also provides powered lift, due to the fans blowing at the trailing edge, requiring only simple high-lift flaps. 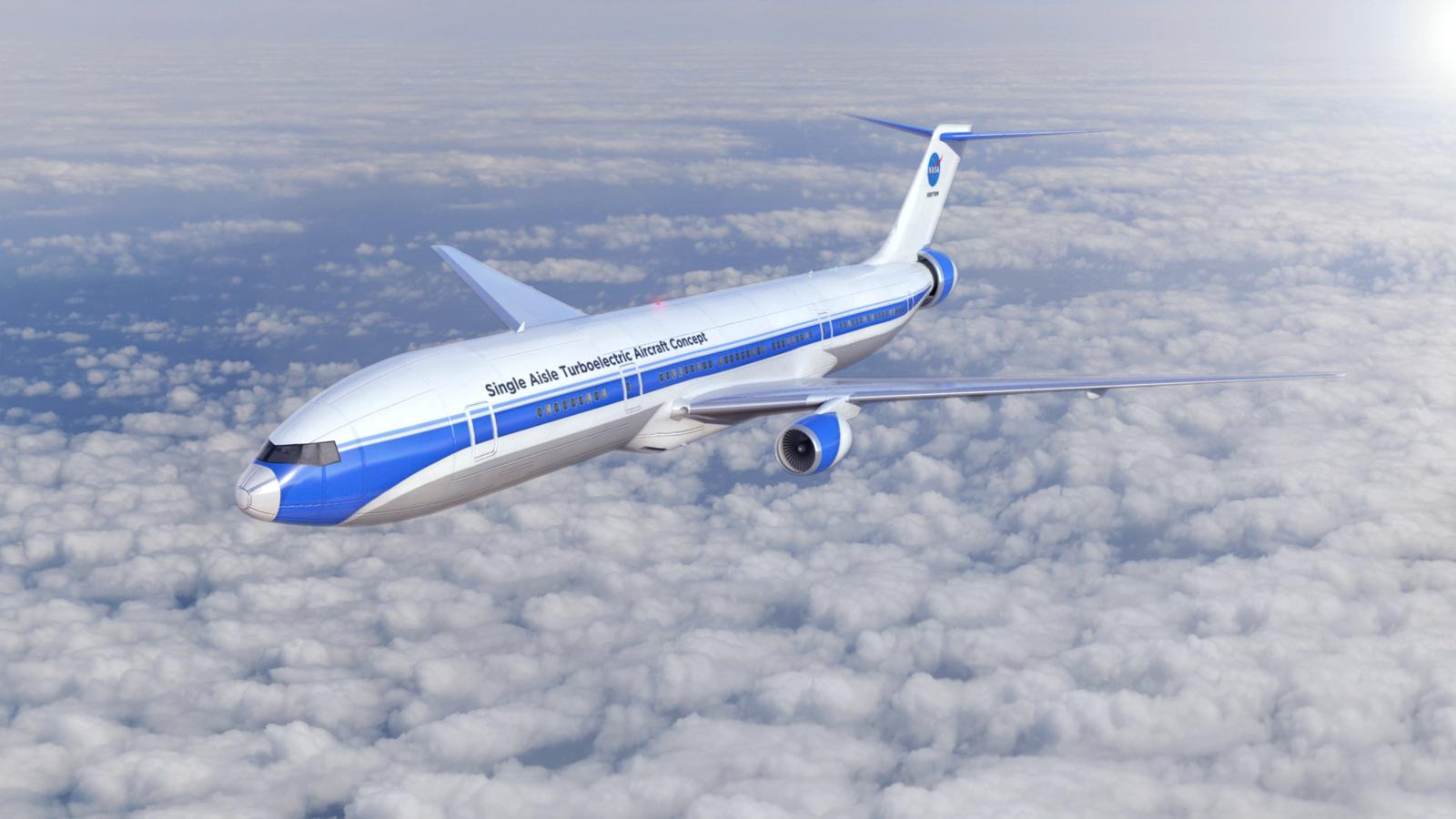 NASA’s STARC-ABL—an acronym that stands for ‘single-aisle turbo-electric aircraft with an aft boundary layer propulsor”—is a relatively near-term concept for a 737-size airliner that can combine the advantages of hybrid-electric propulsion with today’s proven tube-and-wing configuration.

The design has an aft-mounted, electric-driven fan that provides propulsion while ingesting the boundary layer over the fuselage and reenergizing its wake to reduce drag. Generators on the main underwing engines produce the electric power, but the drag reduction allows use of smaller turbofans, saving fuel. 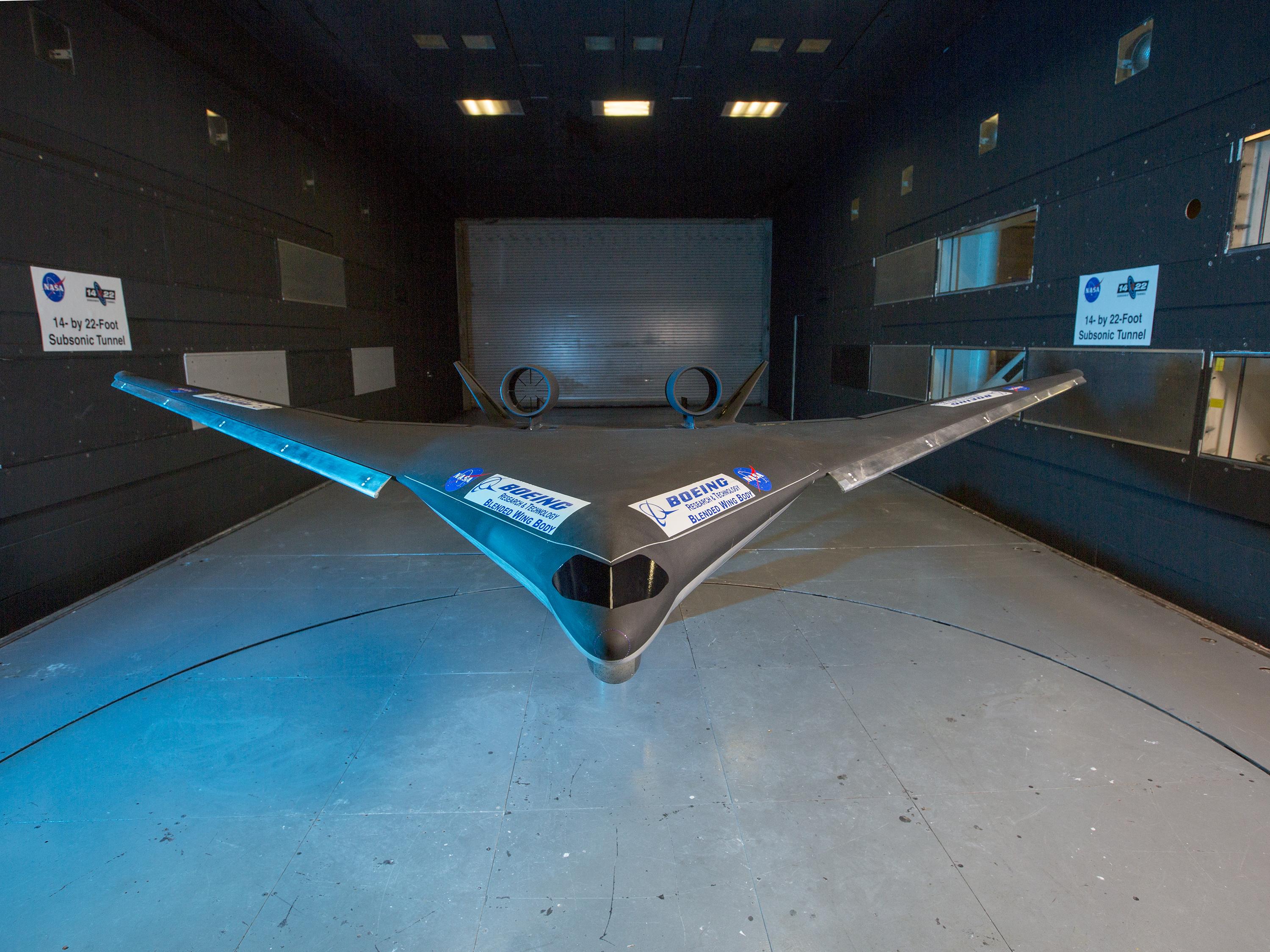 Conceived pre-merger by McDonnell Douglas and developed by Boeing, the blended wing body (BWB) concept is based on a wide fuselage mated seamlessly with high-aspect-ratio wings. The configuration is more aerodynamically efficient than conventional tube-and-wing transports because the entire aircraft contributes to the lift and, because it has less surface area than a comparable aircraft, produces less drag.

The BWB also offers structural gains due to the close integration of the centerbody with the wing. Maximum wing loads are significantly lower than for conventional configurations, providing weight savings. In addition, the engines are located on the aft upper surface, providing natural noise shielding that makes the configuration quieter during takeoff and landing. 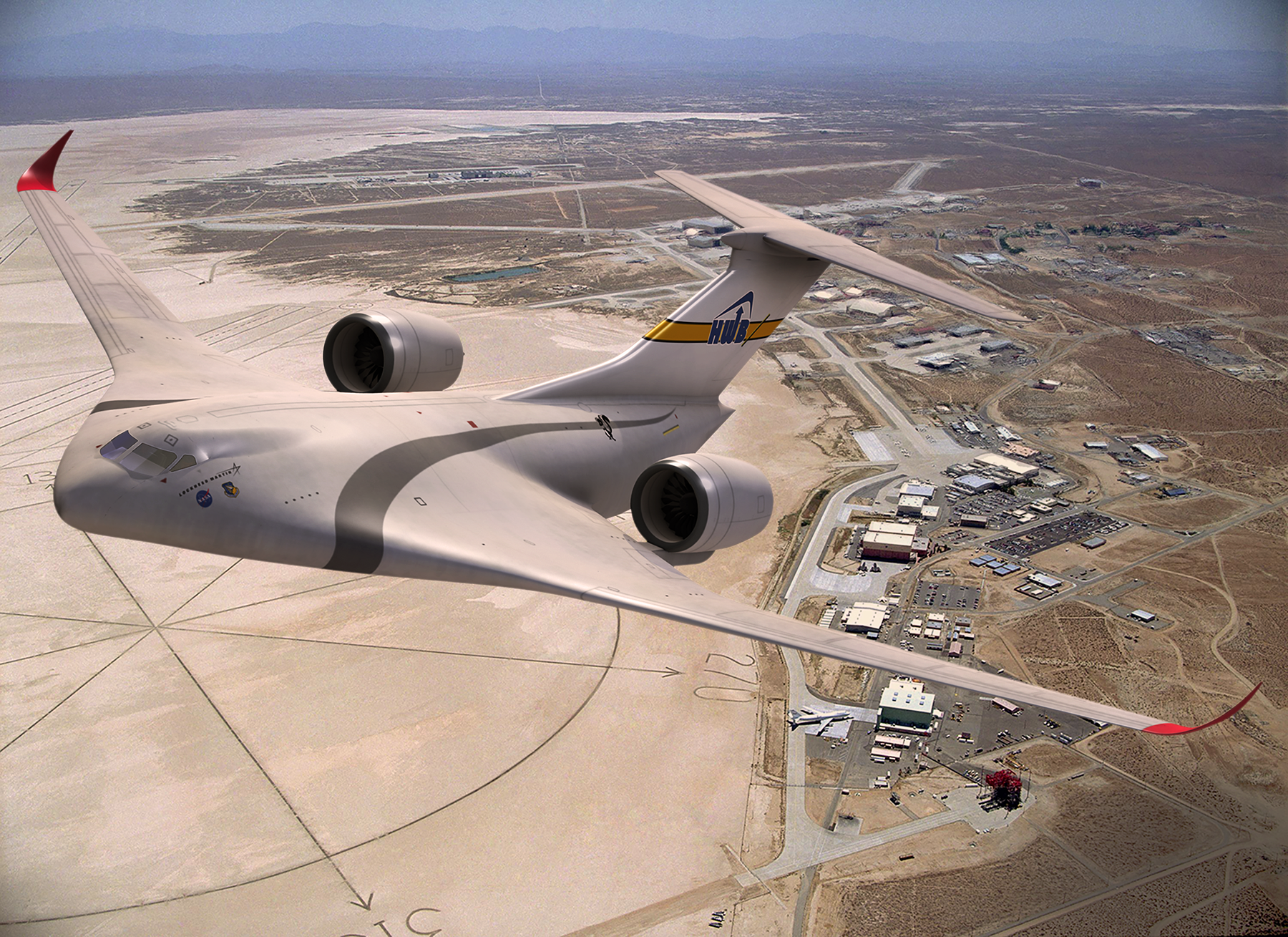 Conceived by Lockheed Martin, the Hybrid Wing Body (HWB) combines a blended forward/center fuselage and high-aspect-ratio-wing for aerodynamic and structural efficiency, with a conventional aft fuselage and T-tail for compatibility with existing airlift infrastructure and airdrop procedures.

Developed with the U.S. Air Force Research Laboratory, and further refined with NASA, the HWB also features an unusual propulsion arrangement that houses the engines in overwing nacelles. Cantilevered on struts over the trailing edge, the overwing positioning enables higher-bypass-ratio engines and is predicted to have 5% less drag than conventional underwing engines. The configuration also provides acoustic shielding and, at low speed, increases aircraft lift without a thrust or drag penalty. 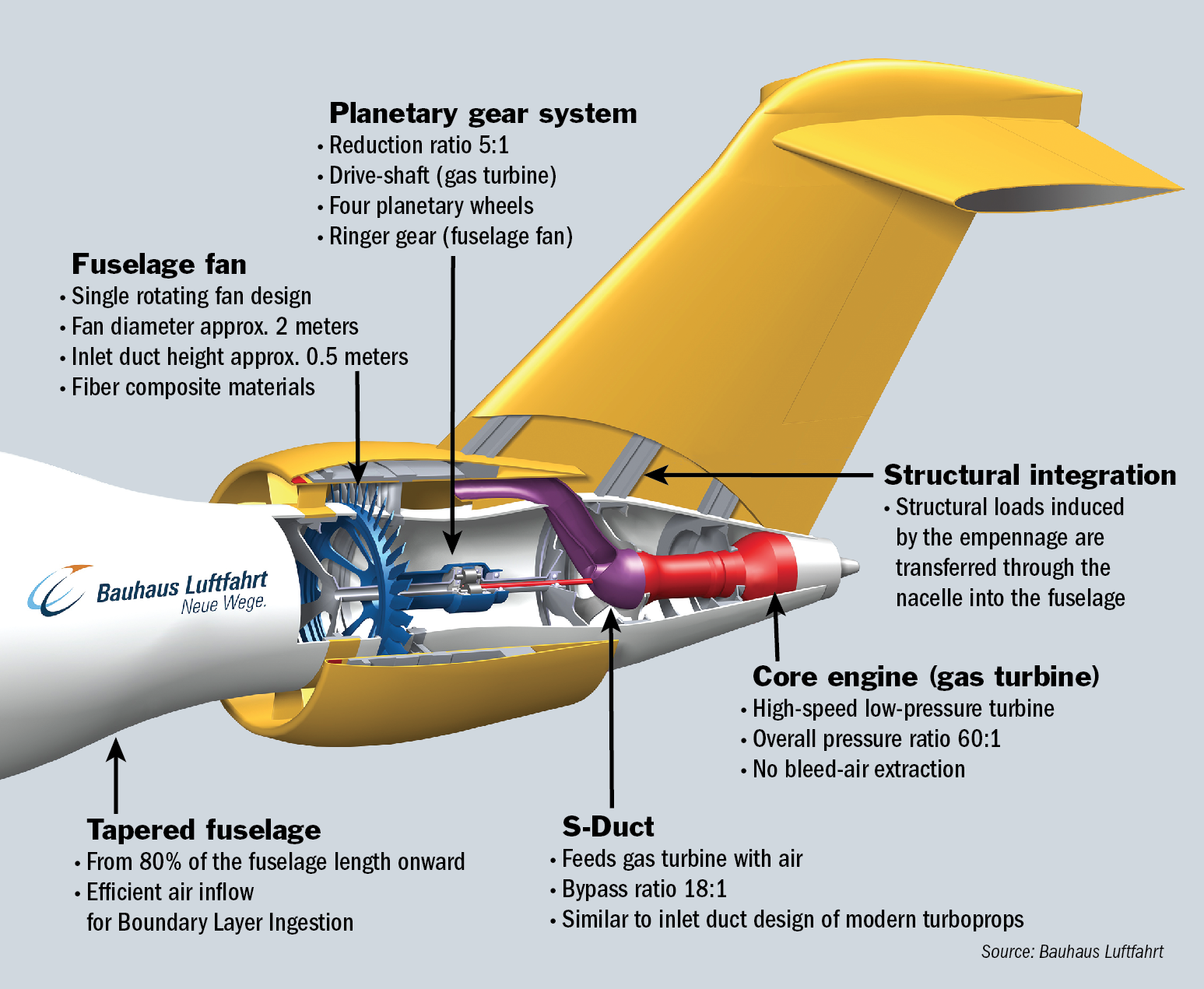 German design house Bauhaus-Luftfahrt, in which Airbus is a shareholder, has developed the Propulsive Fuselage concept for an ultra-efficient airliner. The configuration mounts a fan in the tail, where it ingests air flowing over the fuselage via an annular inlet and re-energizes the wake, reducing drag and fuel burn. 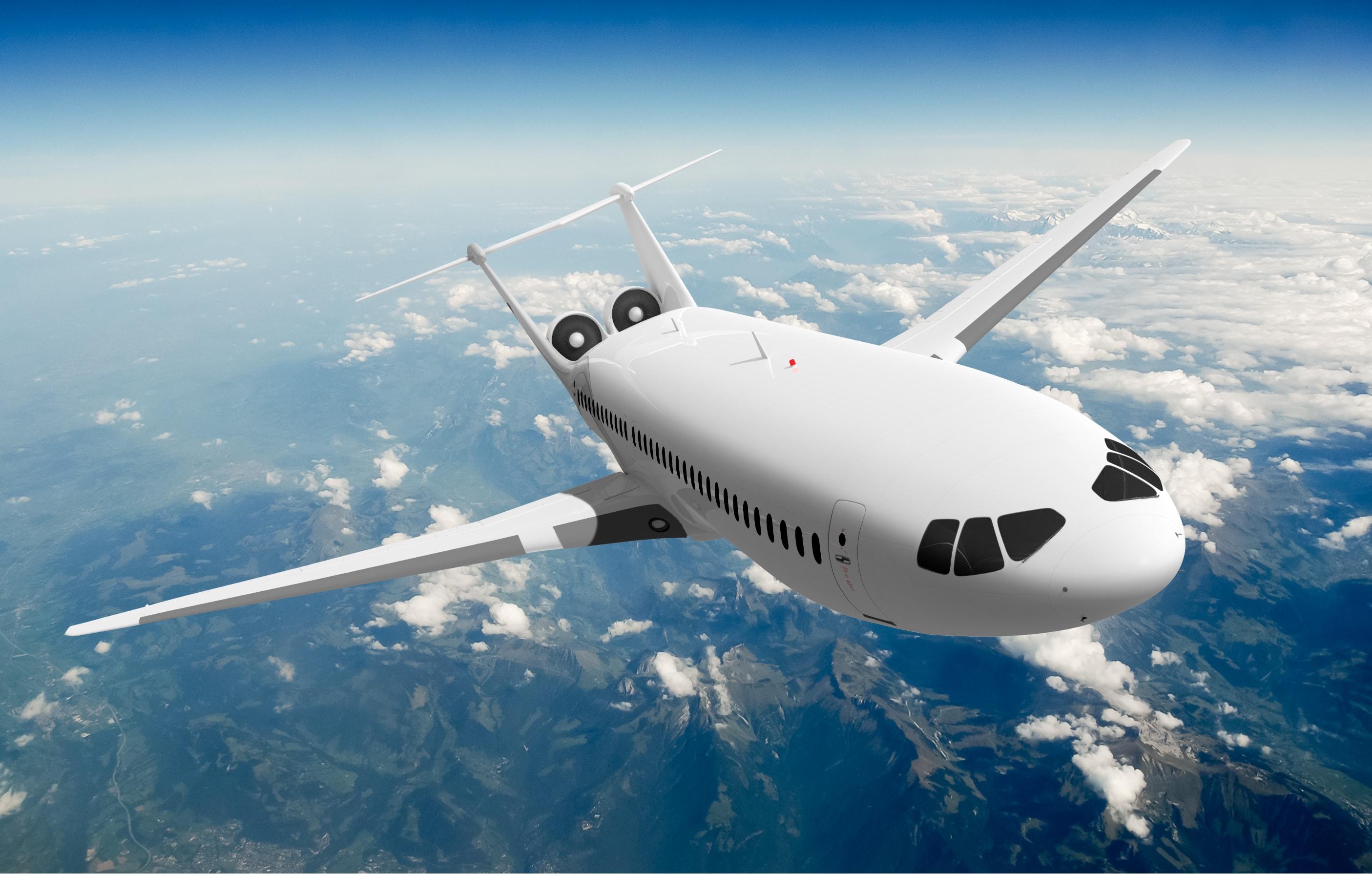 Conceived for NASA by the Massachusetts Institute of Technology, the “double-bubble” D8 is being further developed by Aurora Flight Sciences. The 180-seat aircraft has a wide lifting fuselage with a non-circular cross-section that allows a twin-aisle cabin in a market now served by the narrowbody A320 and 737.

The major innovation in the D8 is boundary-layer ingestion. Turbine engines embedded in the tail drive distortion-tolerant fans that ingest the slow-moving air over the upper fuselage and reenergize the wake, reducing drag. Aurora is targeting a fuel-burn reduction of 49% over the 737-800. 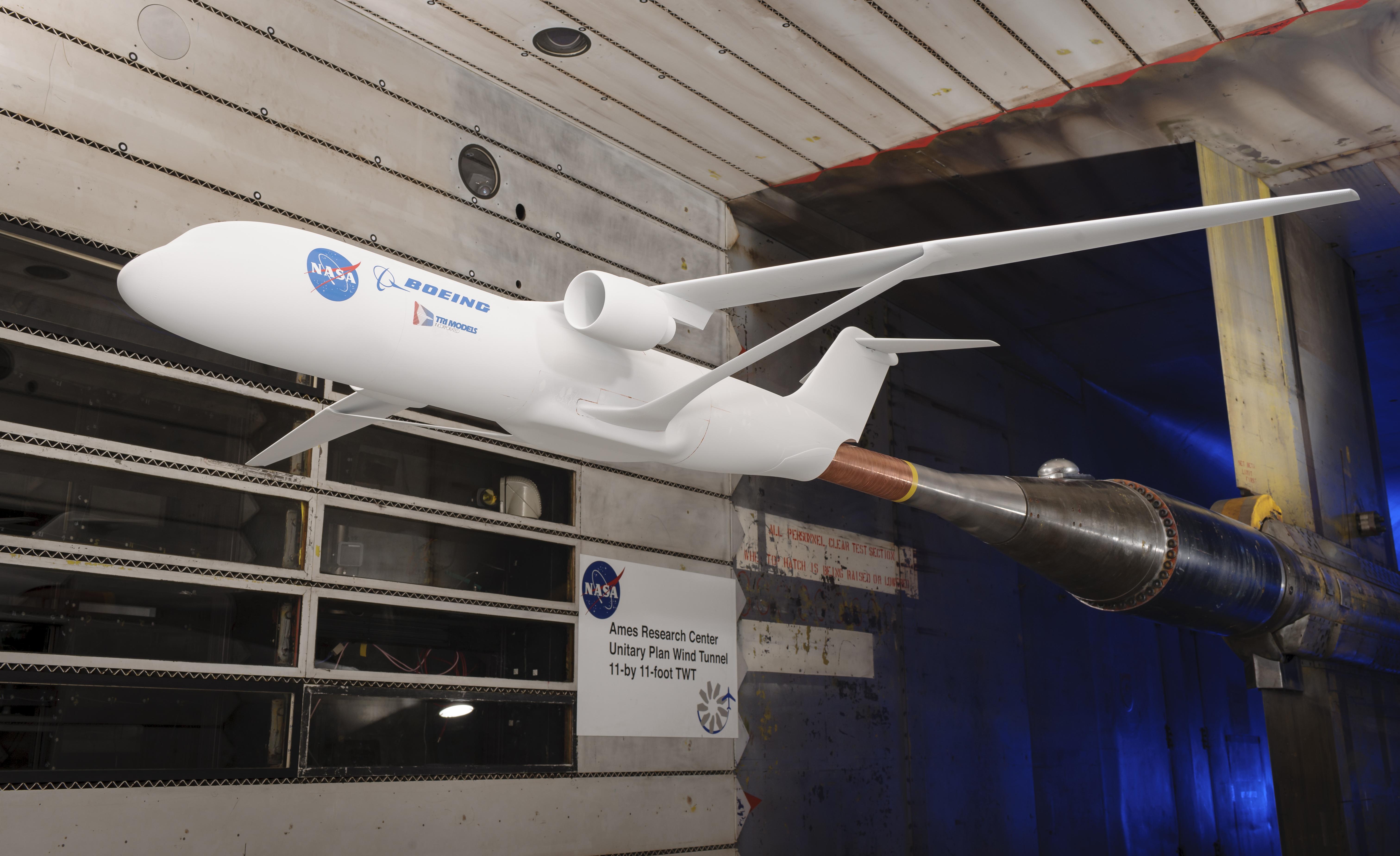 Developed by Boeing under the NASA-funded Subsonic Ultra Green Aircraft Research program, the transonic Truss-Braced Wing (TBW) concept derives its high aerodynamic efficiency from a slender, glider-like wing with an aspect ratio of more that 19.5 compared to 11 for the composite-winged Boeing 787.

Compared to a conventional cantilevered wing, a braced wing can theoretically be lighter because the strut relieves some bending moment. This enables a larger wing for the same weight. The longer the wing, the higher the potential lift-to-drag ratio and lower the induced drag. Struts also allow a thinner wing, significantly reducing wave drag at transonic speeds. The thinner profile is more suitable for natural laminar flow, as well, further reducing drag and enhancing efficiency. 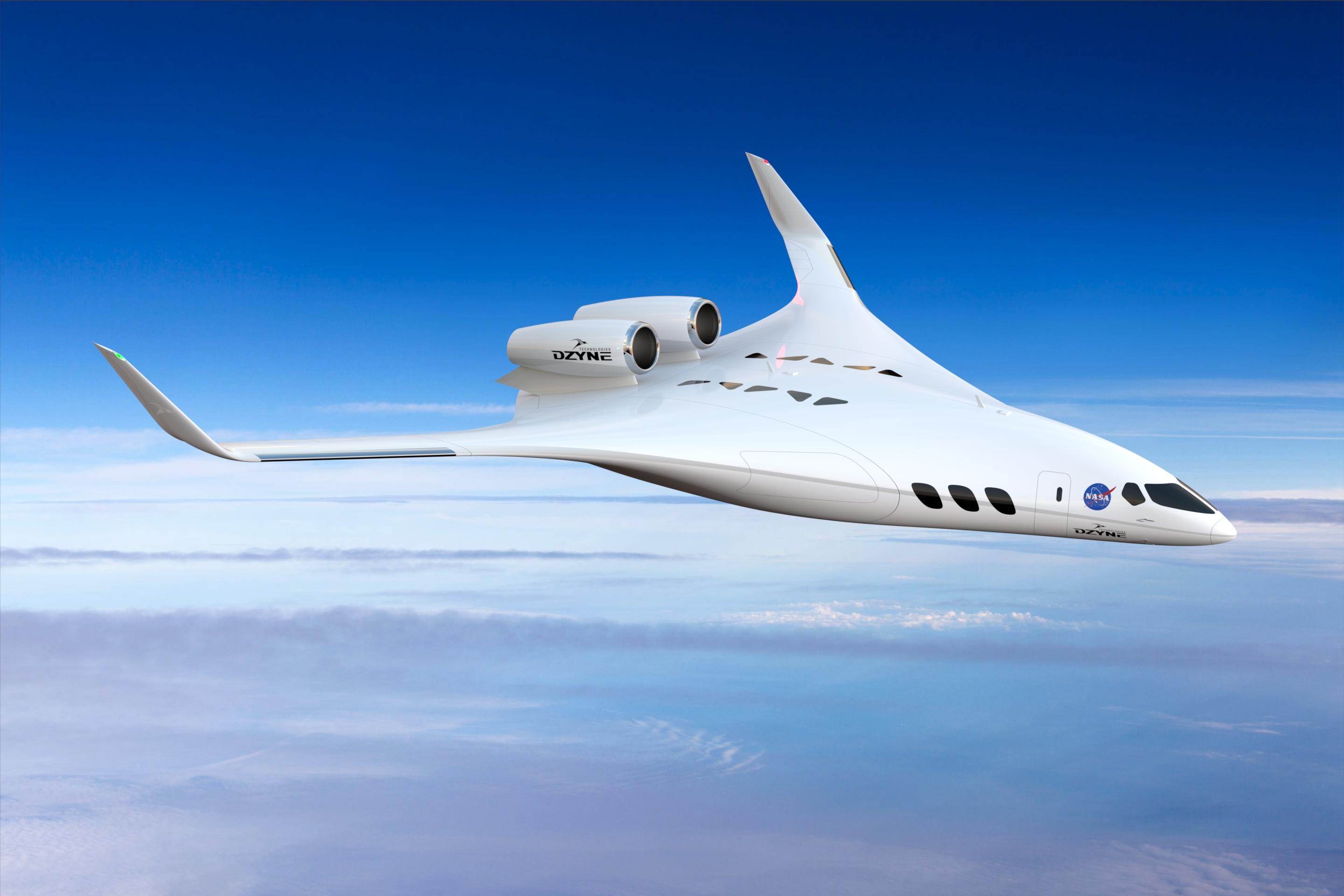 Traditionally, studies show the aerodynamically and structurally efficient blended wing body (BWB) configuration works well for large transport aircraft but less so for smaller regional and business jets. This is because the double-deck design, with passengers above and cargo and landing gear below, results in a deep centerbody and a blended wing that is too thick for efficient transonic flight.

But design house Dzyne Technologies has a concept that moves the gear outward and stores baggage and cargo in the wing roots, outboard of the cabin, reducing the thickness of the centerbody and blended wing. Dzyne has a concept for a 110-130-seat “super-regional” burning 20% less fuel than existing narrowbody designs. As a business jet, essentially the same aircraft has three times the floor area of long-range, large-cabin aircraft such as the Gulfstream G650, the company says.

Under the Next-generation Onera Versitalie Aircraft (NOVA) project, the French research agency is studying two concepts for a future 180-seat airliner to succeed the A320. Both assume future aircraft will have to accommodate turbofans with much higher bypass ratios and fan diameters than today’s engines.

One design has geared turbofans still mounted under the wing, but with increased dihedral inboard creating a “gull wing” to accommodate bigger nacelles without lengthening the gear. The other design has the engines embedded in the tail, where they ingest the low-energy boundary layer flow over the fuselage and reenergize the wake to reduce drag.

Two turbogenerators mounted outboard on the wing drive eight electric motors and propellers installed along the inboard leading edge. This increases the effective bypass ratio of the propulsion system and capitalizes on the high propulsive efficiency of open rotors to reduce fuel consumption and emissions.