Supersonic Hopefuls: Who Will Be First To Fly? 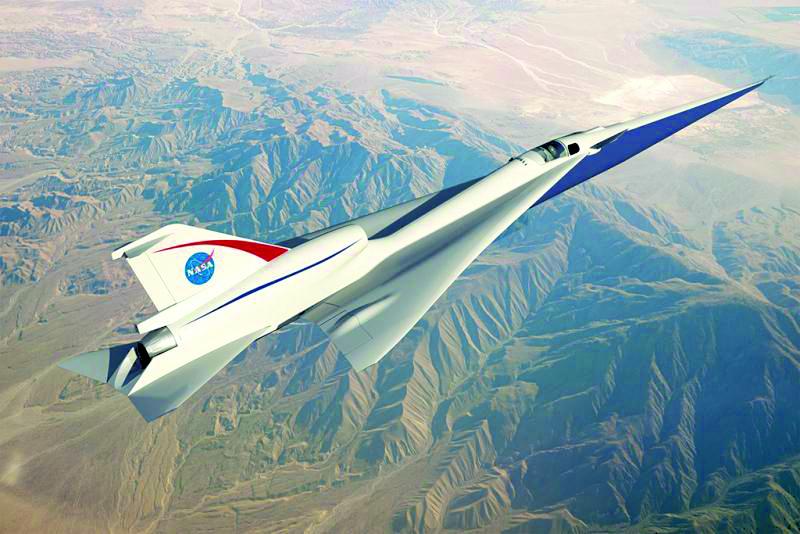 Lockheed Martin is completing preliminary design of a low-boom flight demonstrator as part of NASA’s Quiet Supersonic Transport (QueSST) project. The single-engine, Mach 1.4+ X-plane is intended to mimic the shockwave signature of a 100- to 120-seat supersonic airliner and show that a shaped sonic boom of 75 PLdB is quiet enough to permit supersonic flight over land. NASA plans to fly the competitively procured X-plane in 2019 and begin community acceptance testing in 2020. 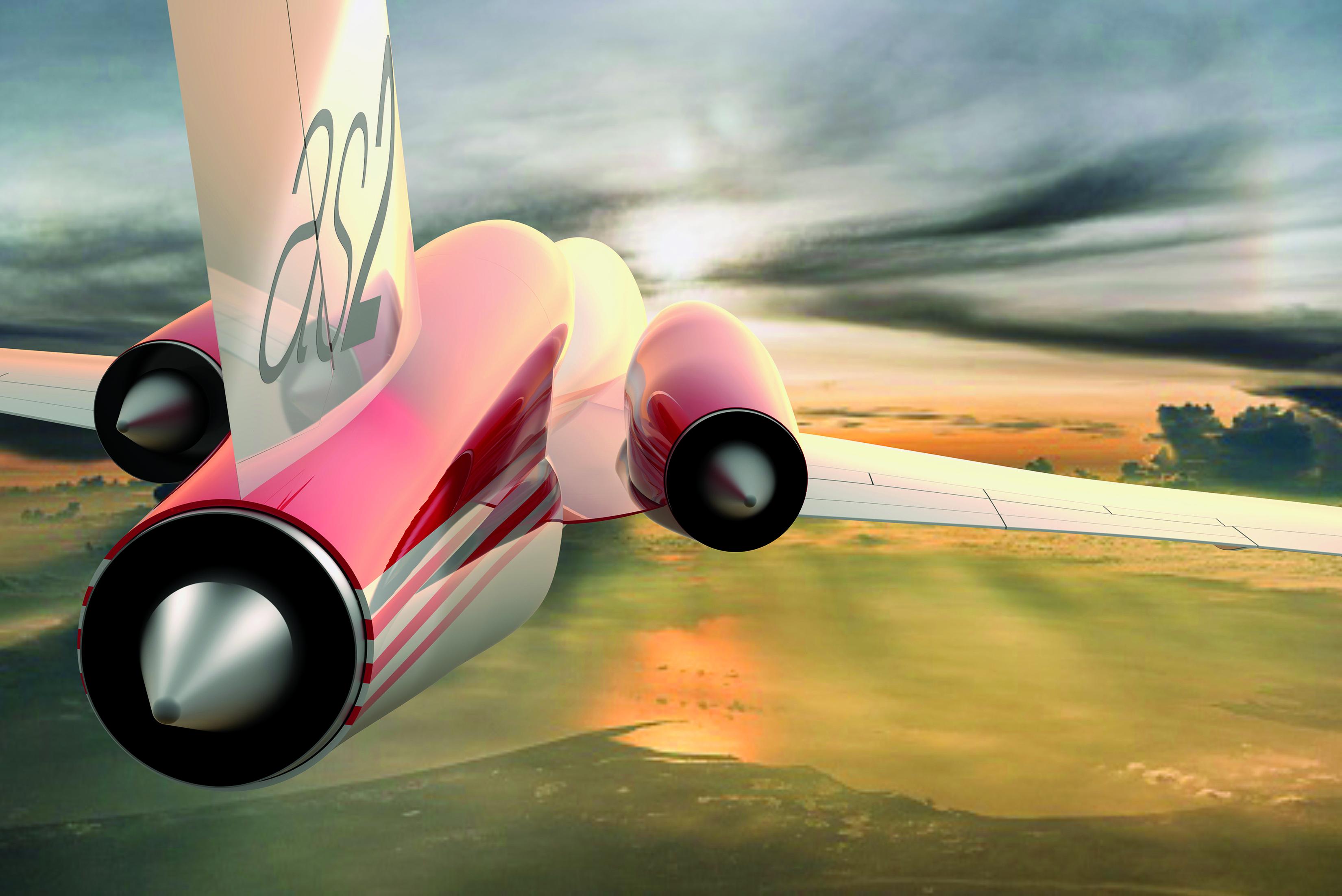 Long in gestation, Aerion’s supersonic business jet is now being supported by Airbus.

Other companies, such as Aerion, are taking an alternative approach by developing aircraft that would cruise supersonically over water like the Concorde and travel transonically, close to the sound barrier, overland. Aerion (Booth 2225) has been developing a supersonic business jet since the early 2000s. The company, which is receiving engineering assistance from Airbus Defense and Space, aims to launch the certification program for its trijet AS2 by the end of 2017. With a natural-laminar-flow wing for efficiency at supersonic and subsonic speeds, the 12-seat AS2 is designed to fly 4,750 nm at Mach 1.4 and 5,300 nm at Mach 0.95. Fractional ownership operator Flexjet has ordered 20 AS2s for transoceanic services beginning in 2023. 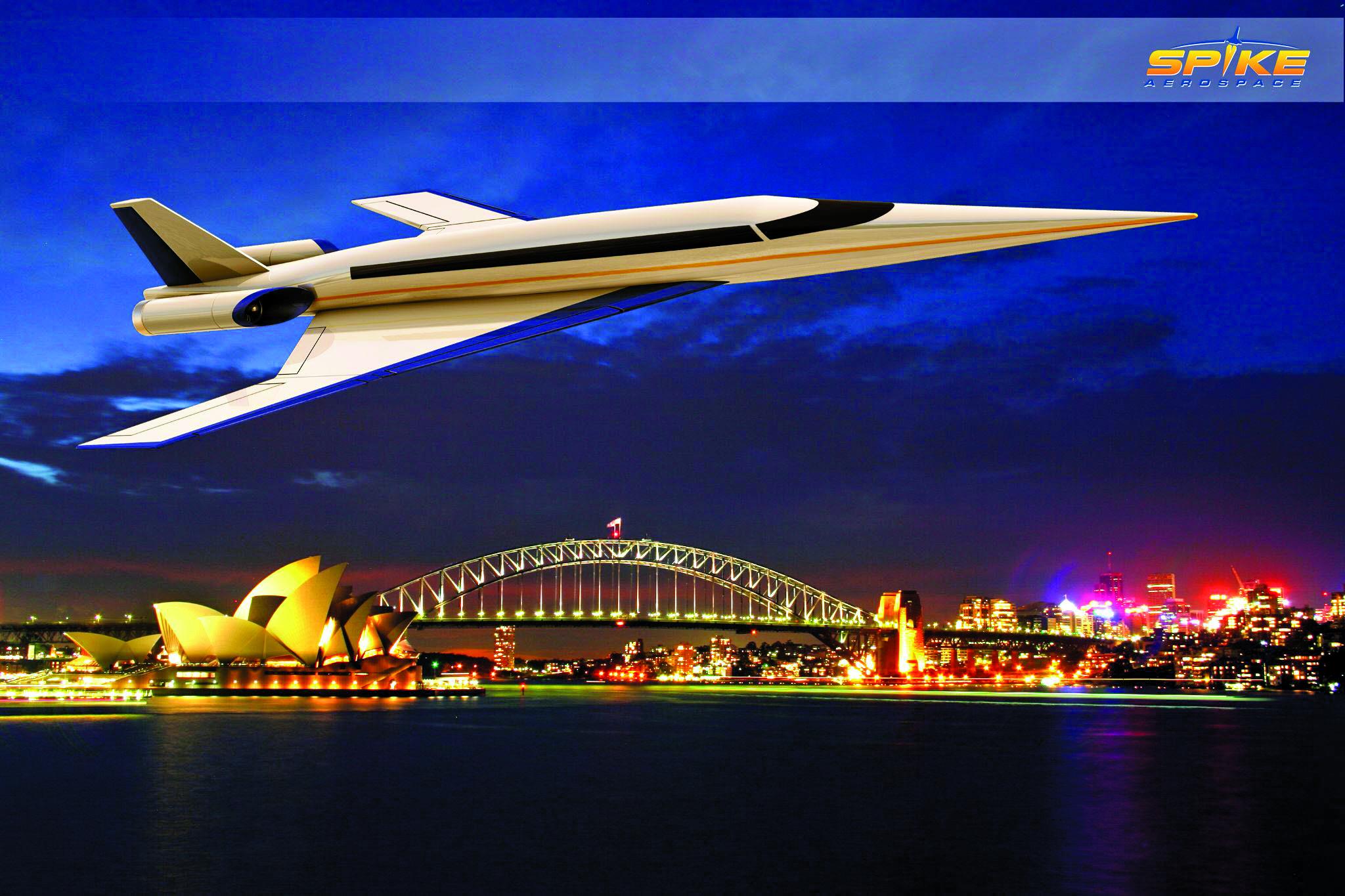 Spike Aerospace of Boston is self-funding a design incorporating a pair of unspecified 20,000-pounds-thrust engines. Predicting that most supersonic flying will be over water, Spike has reduced its costs and development timescale by dispensing with boom-reduction measures. A Multiplex Digital cabin – the windowless walls of which are covered by thin display screens projecting entertainment – is another cost saver. Seating 12 to 18 passengers, the S-512 will cruise at Mach 1.6 and cover 5,850 nm supersonic, or 4,050 nm subsonic. Recent months have been spent forging alliances with other aerospace companies and pondering engine selection. First flight target is “early 2020s” with first deliveries in 2022-23.

At NBAA Spike and Greenpoint Technologies, a completion center owned by Zodiac Aerospace, signed a MOU to coordinate interior design, engineering and technology efforts as part of initiatives to accelerate the development phase of the VIP business interior. The two companies say “the next step includes an interior study with engineering and design to capture the interior’s possibilities.” 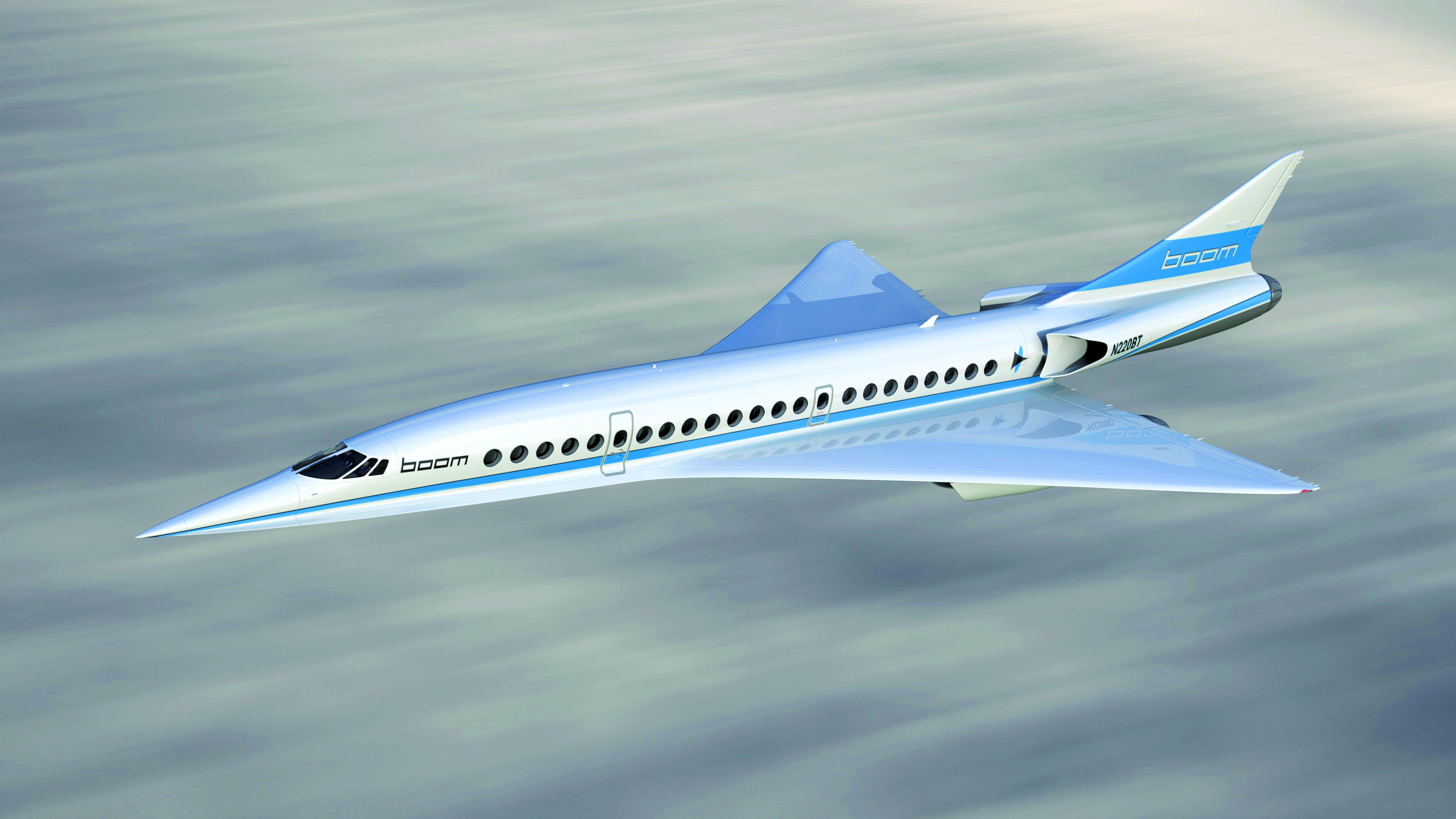 Boom’s concept has been stretched and converted into a trijet.

Denver-based Boom Technologies is developing a 50-seat trijet that will cruise at Mach 2.2 for the same ticket price as subsonic business class. The aircraft, which like the Aerion and Spike concepts is designed to operate supersonically over water only, has since been stretched to seat up to 50 and reconfigured as a trijet to permit immediate use on long oceanic routes.

Although aimed primarily at the airline market, the aircraft will serve the large, long-range business jet sector, says Boom Technologies CEO Blake Scholl. “It has double the size of the Gulfstream 650 cabin, and, surprisingly, the operating cost per nautical mile is pretty similar to the G650. You get more miles out of the hour,” says Scholl, who adds that the Boom aircraft will be “a really attractive story for the fractional companies.”

Boom is developing a one-third-scale prototype, dubbed XB-1, at its Centennial Airport facility in Denver, which will be used to verify key elements of the design and aerodynamics. The demonstrator, which will be powered by three General Electric CJ610 turbojets, will be used to expand the subsonic flight envelope in Colorado starting in late 2017. Supersonic flight tests will then be conducted in California, in the restricted airspace around Edwards AFB. As engine selection is the pacing item for the entire project, Boom intends to down-select to the appropriate core in 2017-2018 to enable entry into service by 2023. 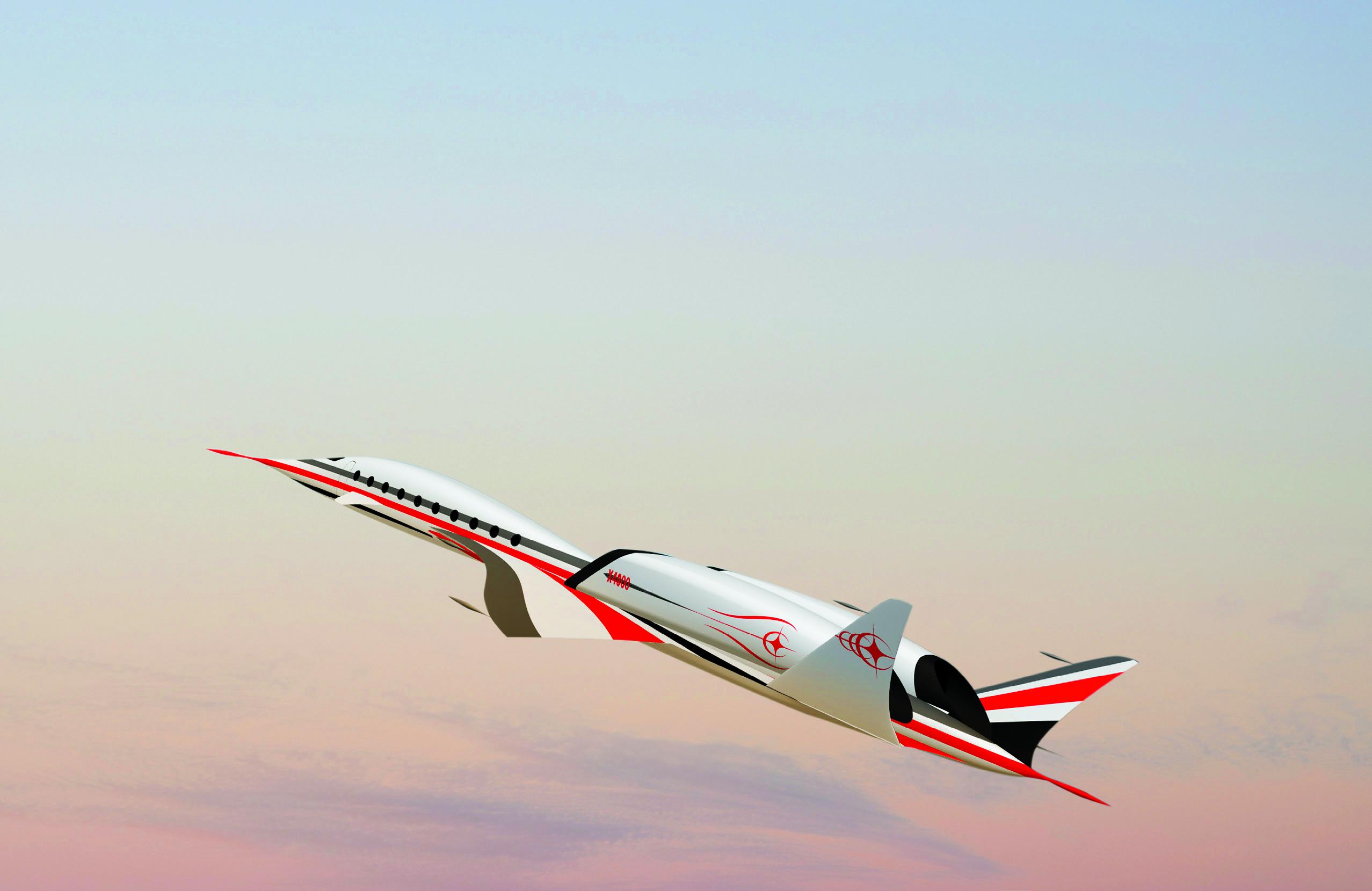 HyperStar is aimed at flying from New York to London in 1 hour, 15 minutes.

HyperMach Aerospace is developing an innovative hybrid turbofan ramjet-powered business jet that will cruise at 80,000 ft. and fly close to the edge of hypersonic speed at Mach 5. Dubbed the HyperStar, the aircraft will carry up to 36 passengers on routes up to 7,000 nm. HyperMach plans to announce its airframe partner in the second quarter of 2017 and is preparing to begin high-speed wind-tunnel tests at an undisclosed site in Europe in May. Low-speed wind tunnel tests, which will take place in the U.S., are set to begin next June.

Sonic boom will be mitigated by the use of electromagnetic drag reduction technology (EDRT), which will generate a plasma ion field around parts of the structure to activate a form of laminar flow control. The plasma field is intended to not only help reduce heat flux loads on the HyperStar’s ceramic composite skin, but to also reduce the source of shock waves to lessen the N-pressure wave that causes the sonic boom.

First full engine run of the aircraft’s equally innovative H-Magjet 5500-X powerplant is targeted for 2019. The 76,000-pounds-thrust hybrid turbofan ramjet has no conventional shaft and will instead be based around a superconducting turbo power core ring, an ion plasma injection combustor and an electromagnetic compressor and associated bypass fans.

The ability to fly supersonic over land will be the game changer for supersonic business jets, but that’s not likely to happen for another 10 to 15 years, says Gulfstream, which is actively but quietly studying the concept.

“The earliest will be 2025-2030,” says Dan Nale, SVP for programs, engineering and test. “That’s the earliest the ICAO process can change the rules to allow it.” Meanwhile Gulfstream, which has conducted more studies into supersonic flight and mitigation of the sonic boom than any other business jet manufacturer, continues to carry out original research, participate in regulatory issues and undertake paper studies.

“We’re doing a lot of the preliminary design studies,” says Nale, who believes the sonic boom and engine emissions from flying that fast at altitude will be the two major issues to overcome. Next step is for NASA to fly its proposed supersonic demonstrator, on which it is working with Lockheed Martin. “Gulfstream is involved as part of NASA’s consulting review panel,” he adds.

Gulfstream believes the aircraft must be shaped to minimize the boom, and to that end it earlier test-flew an extending nose on a NASA F-15. That Pinocchio-like proboscis is now on display in the lobby of the company’s advanced acoustics lab in Savannah.