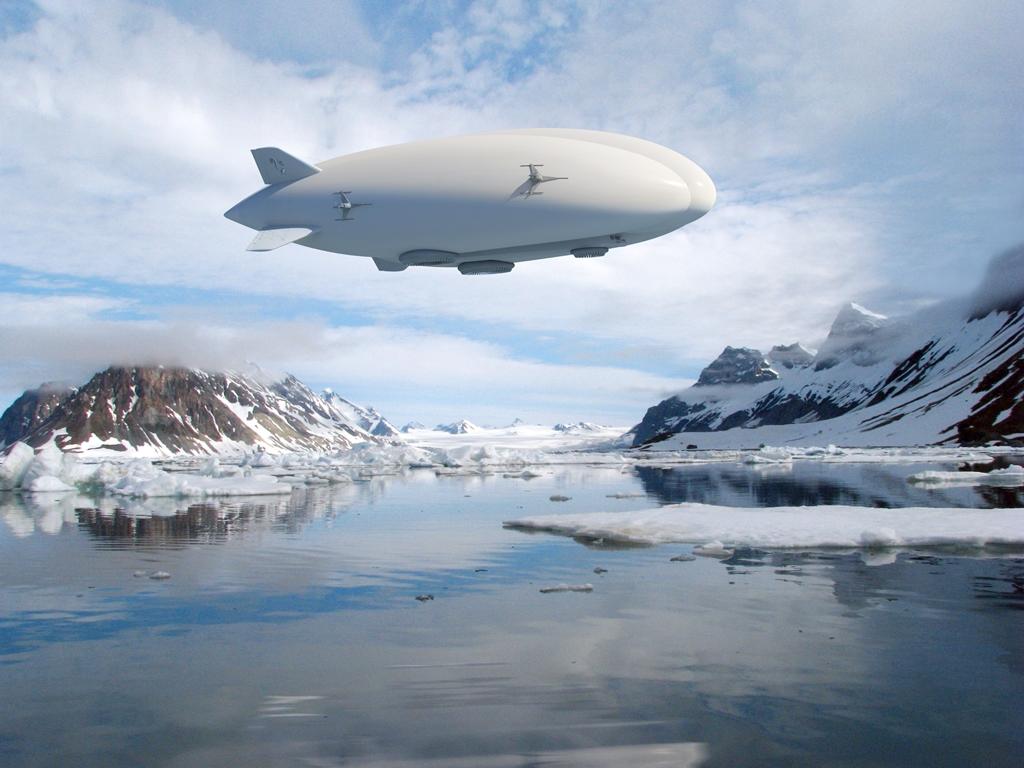 Capable of carrying 47,000 lb. of payload and up to 19 passengers over ranges up to 1,400 nm at a cruise speed of 60 kts, Lockheed Martin’s hybrid airship offers lower cargo transport costs to remote areas that road and current air alternatives cannot match.

The LMH-1 derives 80% of its lift from the buoyancy of helium gas and 20% from the aerodynamic lift generated by the shape of the tri-lobed vehicle and the thrust of its four propeller engines. 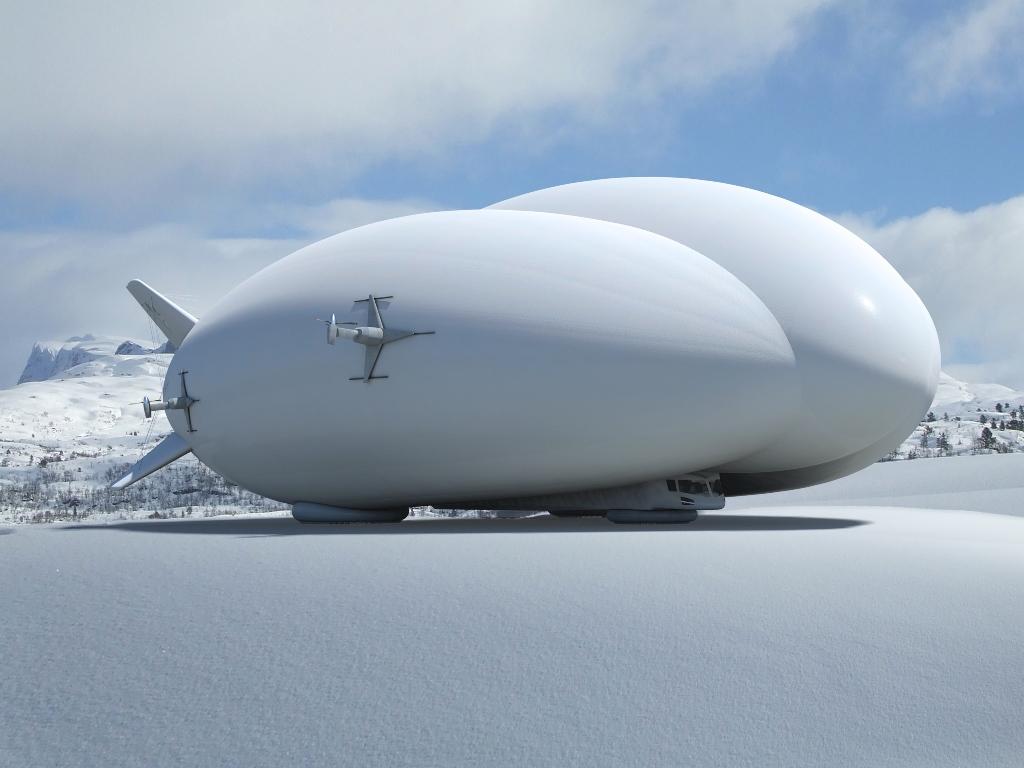 New owner/operator StraightLine says that ability of the LMH-1 to land anywhere opens up the number of remote mining and oil and gas extraction projects have not been able to proceed because of the environmental concerns relating to getting access to those locations.

Such projects usually require the construction of roads and airstrips to support them, but use of the LMH-1 could eliminate the need for roads as many large and bulky components could be transported. 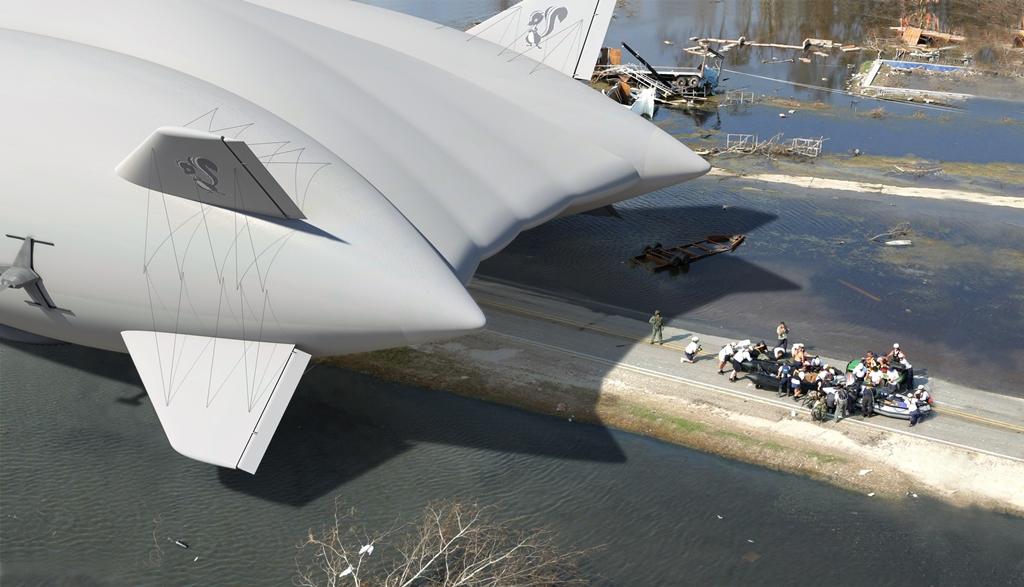 The LMH-1 will have the capability to land anywhere, including on water using an air cushion landing system (ACLS) based on the P791 system.

Unlike the four-pad ACLS used on the P791, however, the LMH-1 system will incorporate two main pads aft and a smaller, forward-mounted ACLS pad.

The vehicle is designed to land aircraft-like on the two main pads first and then on the ‘nose leg’ positioned pad which is located beneath the forward end of the 150-ft long passenger and cargo carrying gondola. 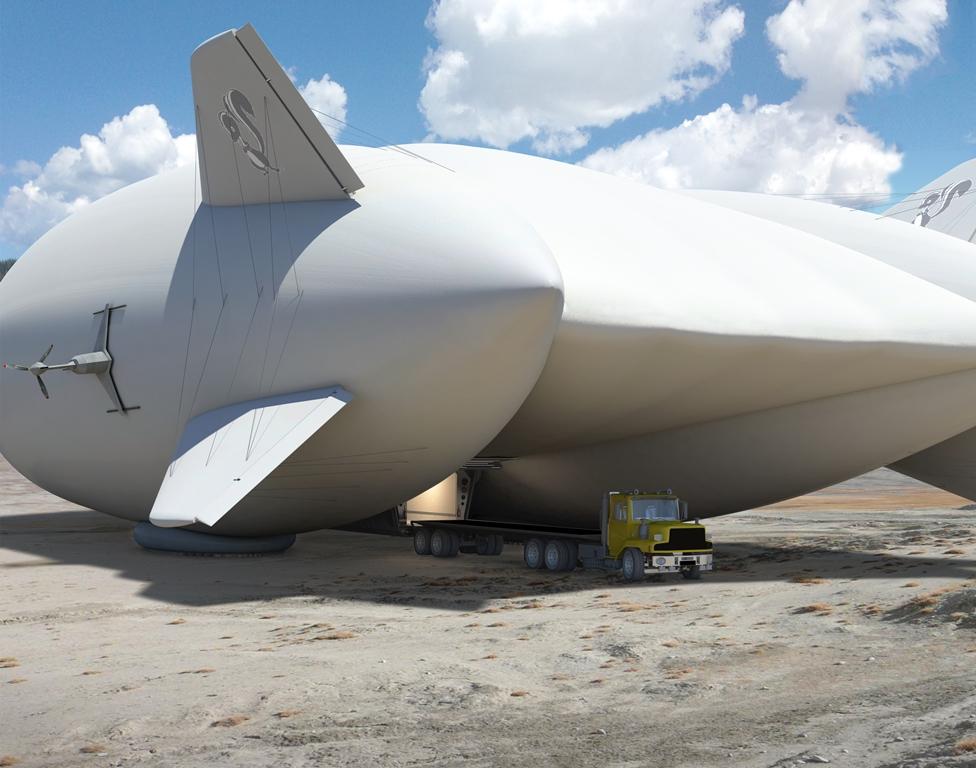 Situated beneath the central lobe is a gondola measuring 150 ft. long, 10 ft. wide and 10 ft. tall. The cargo is carried in a 60-ft. long section aft which opens up for loading and unloading at truck bed height. For longer loads the cargo bay doors can remain open in flight. 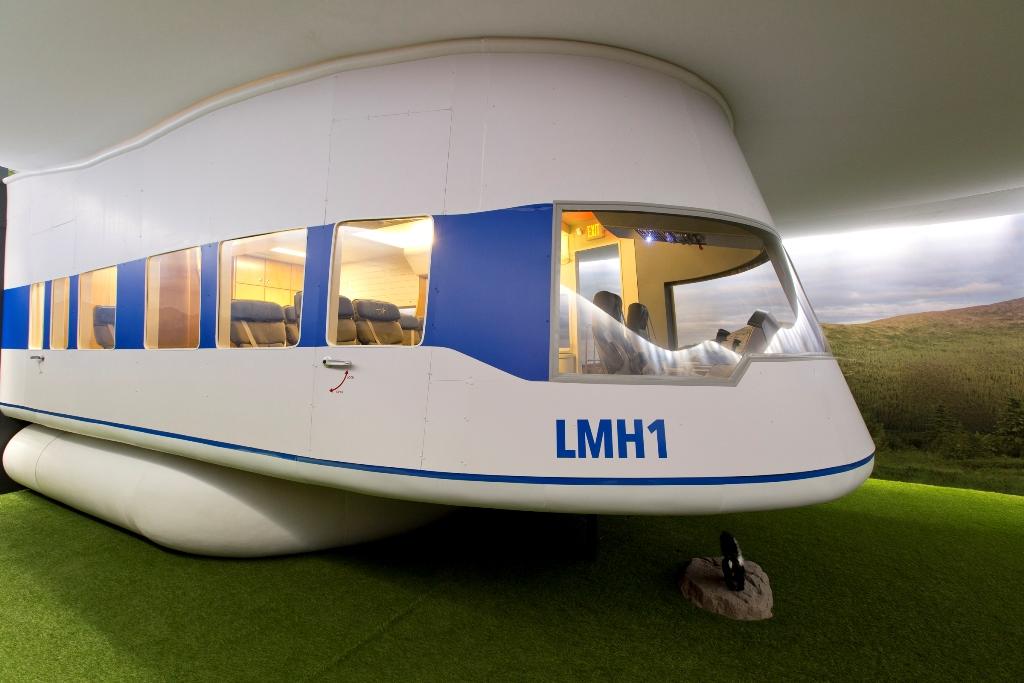 The forward pad of the ACLS is mounted beneath the passenger and crew cabin. Although the final outline may change the windshield is currently tilted inwards to minimize reflective glare. 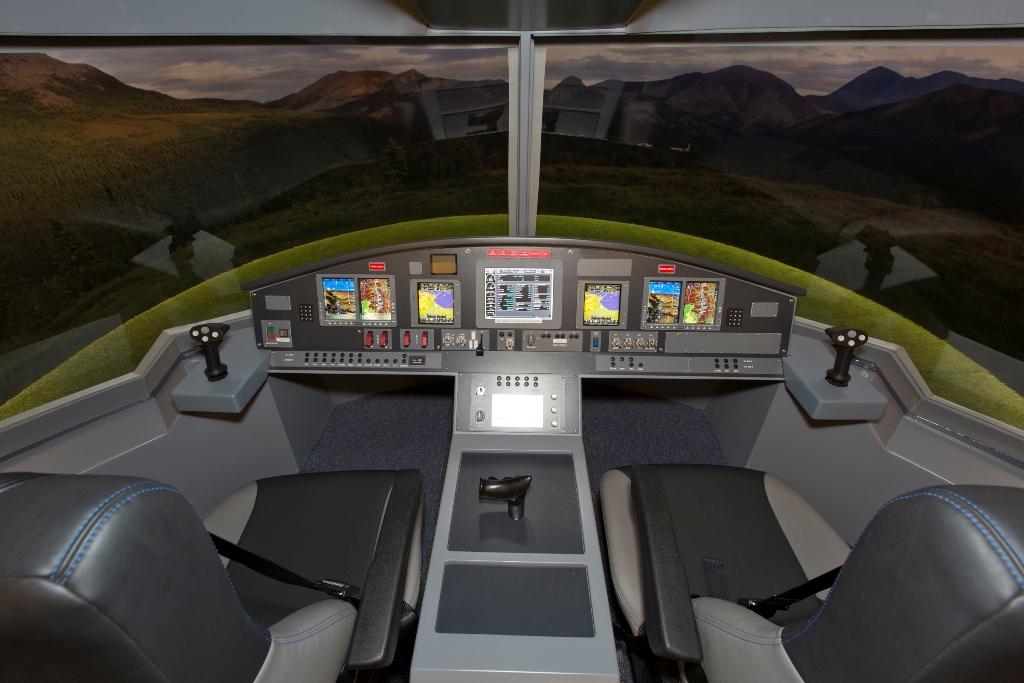 Thrust vectoring and motion of control surfaces on the four tails on the LMH-1 are controlled from a simple flight deck through a vehicle management system using electronic fly-by-wire (FBW) controls.

The full axis FBW system controls the tails, the four gimballing thrusters, the throttles and the pitch of the blades.

For take-off and landing the FCS system is derived from the algorithm developed for the F-35B short take-off and vertical landing version of the Joint Strike Fighter. Below 20 kts, inputs from the control inceptor in the two-person flight deck will operate in vertical mode.

Above 25 kts, these convert to ‘up-and-away’ flying mode. Between the two airspeeds is a blended zone for the transition to landing from forward flight, or vice versa.

A trigger on the sidestick controller initiates a braking maneuver which is instigated by deflection of the vertical tails followed by reverse pitch on the propellers as speed drops below 15 kts. 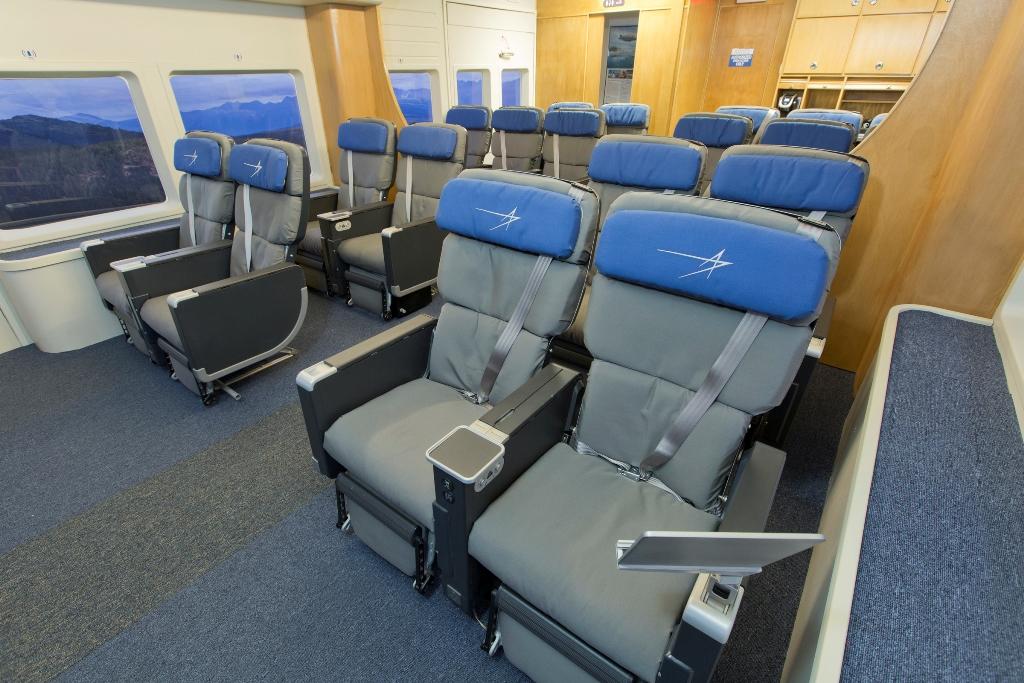 Given the longer transit times associated with the hybrid airship compared to helicopters or fixed wing alternatives, the company believes most operators will fly construction crews and equipment handlers associated with the cargo, rather than necessarily using the LMH-1 as a transport vehicle for personnel. 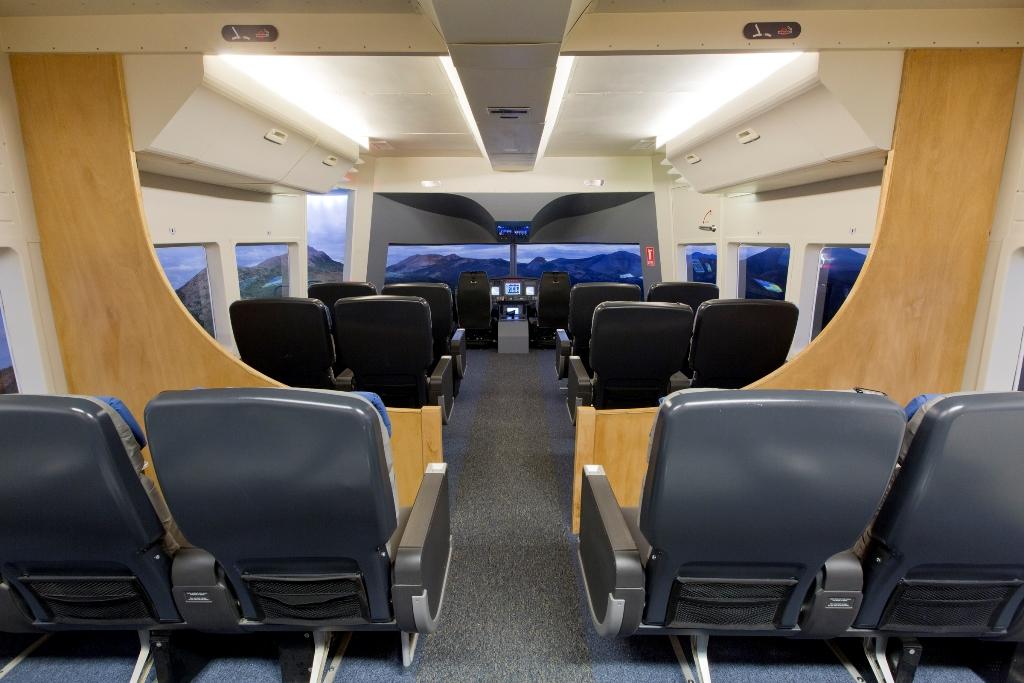 The spacious interior of the cabin looking forward from the galley area and access to the cargo section. The LMH-1 cabin is thought to be the first large scale passenger accommodation mock-up built by Lockheed at Palmdale since the days of the L-1011 TriStar in the 1960s. 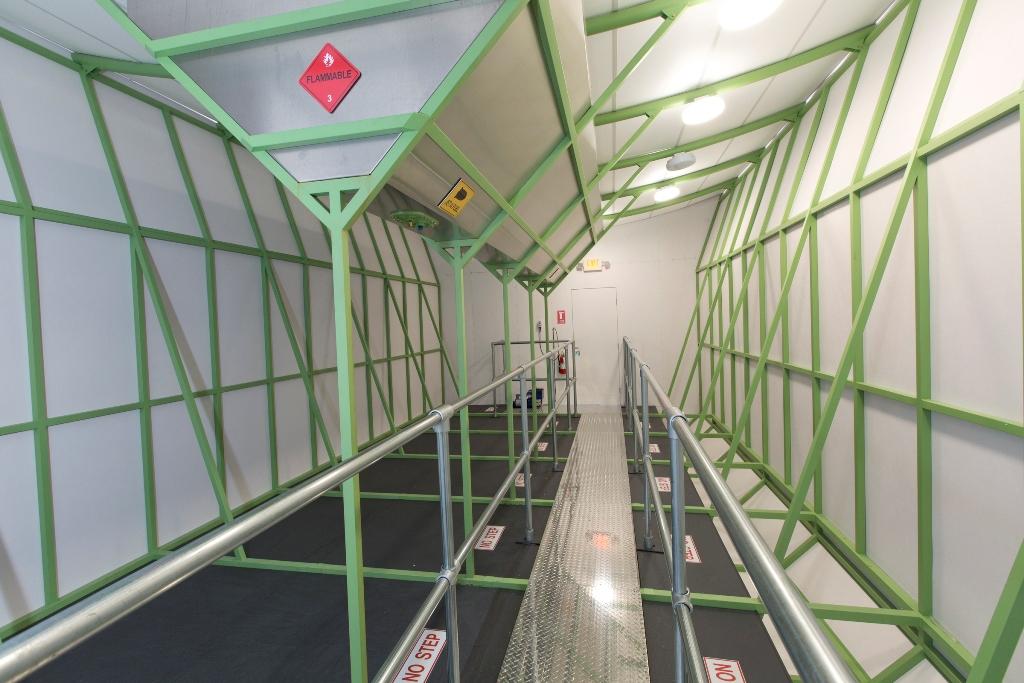 Between the crew/passenger cabin and cargo section is a central equipment bay which will also house fuel tanks for the LMH-1’s diesel engines. 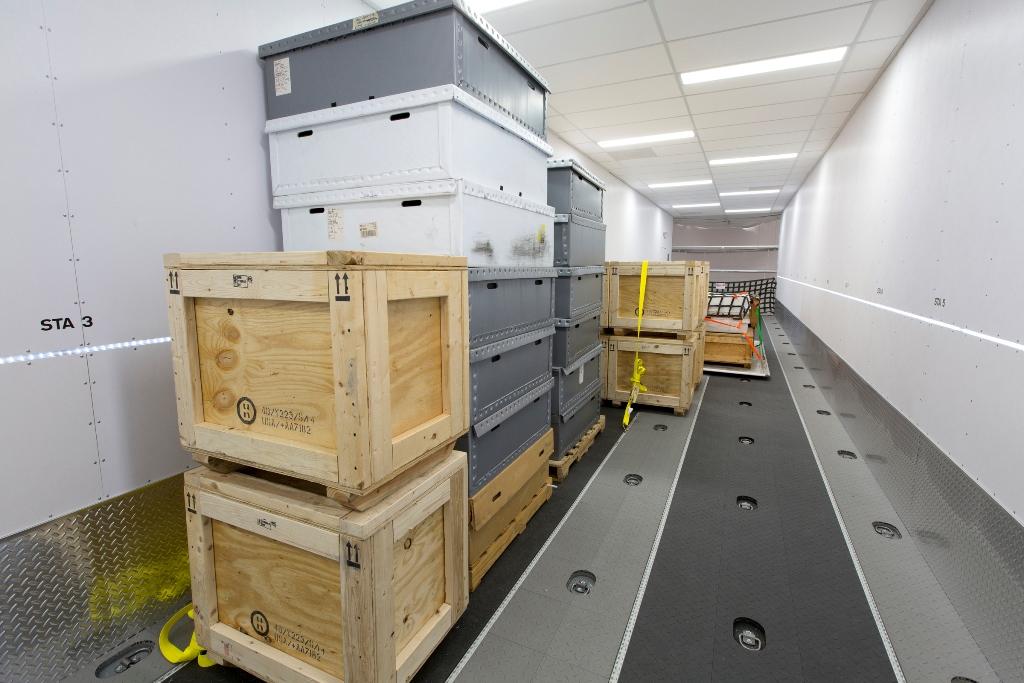 The cargo section contains tie-downs and a strengthened deck capable of taking heavy construction vehicles and bulldozers. The cargo transport unit cost target is 10 times lower than a helicopter. 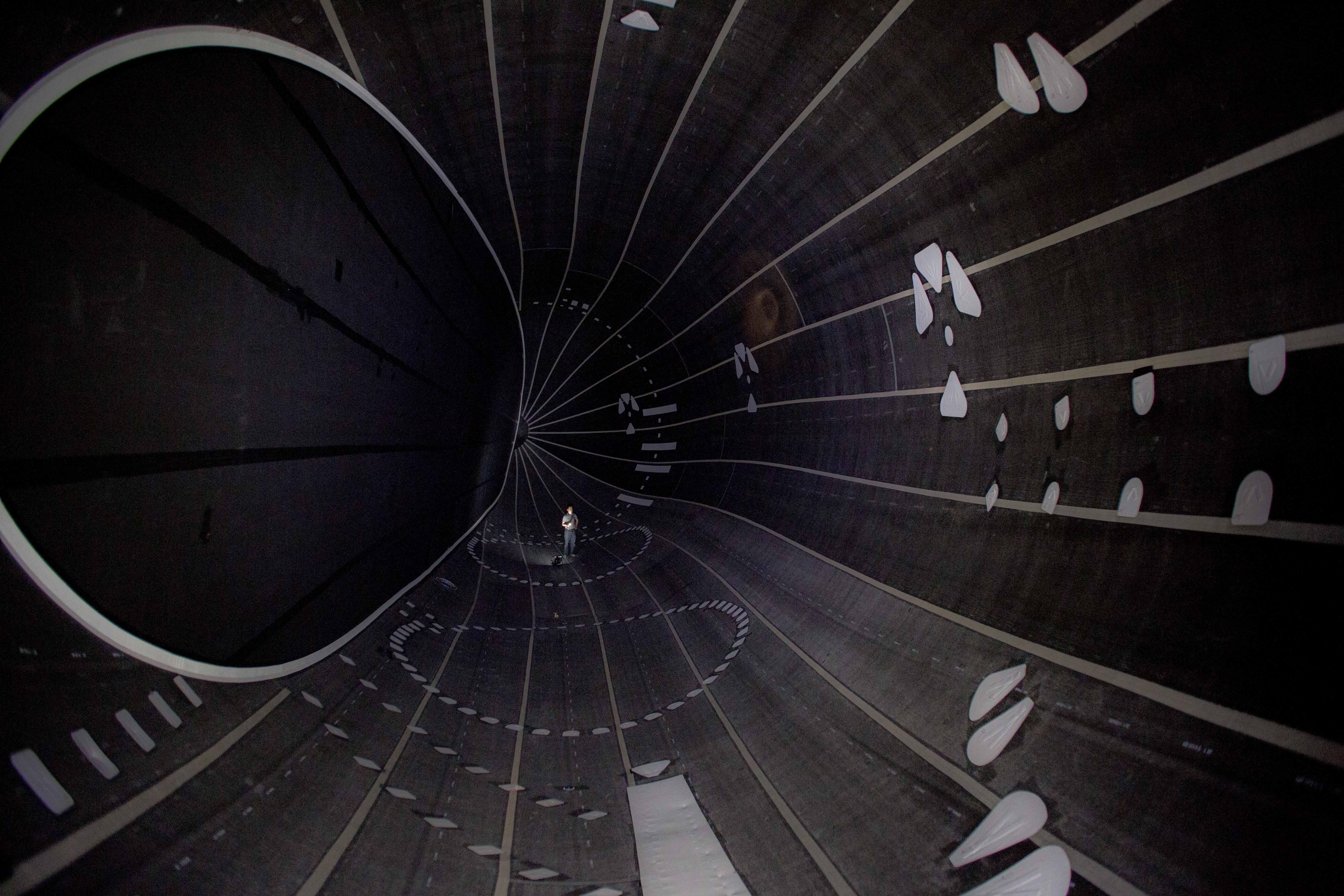 Inside The Belly Of The Beast

On a recent visit to Lockheed Martin’s Skunk Works where the LMH-1 will be built, journalists were given the rare opportunity to clamber inside the central and side lobes of the P-791 demonstrator on which the new hybrid airship will be based.

Inflated with air, rather than helium, the dark interior could be viewed using flashlights. In a helium-filled interior this view would be obstructed by ballonets, which are air-inflated bags used to adjust the lift.

This view shows one of the sidelobes with a septum diaphragm on the left segregating the center lobe from its neighbor.

The wall incorporates an access hole which, in the event of a major leak, can be plugged with a balloon to seal in the gas. The patches are doublers made of multi-layered Vectran weave and mark attachment areas for control surfaces, the ACLS pads and propulsors.

As the era of the commercial hybrid airship dawns, we take a closer look at more features of the newly-launched Lockheed Martin LMH-1. All photos: Lockheed Martin