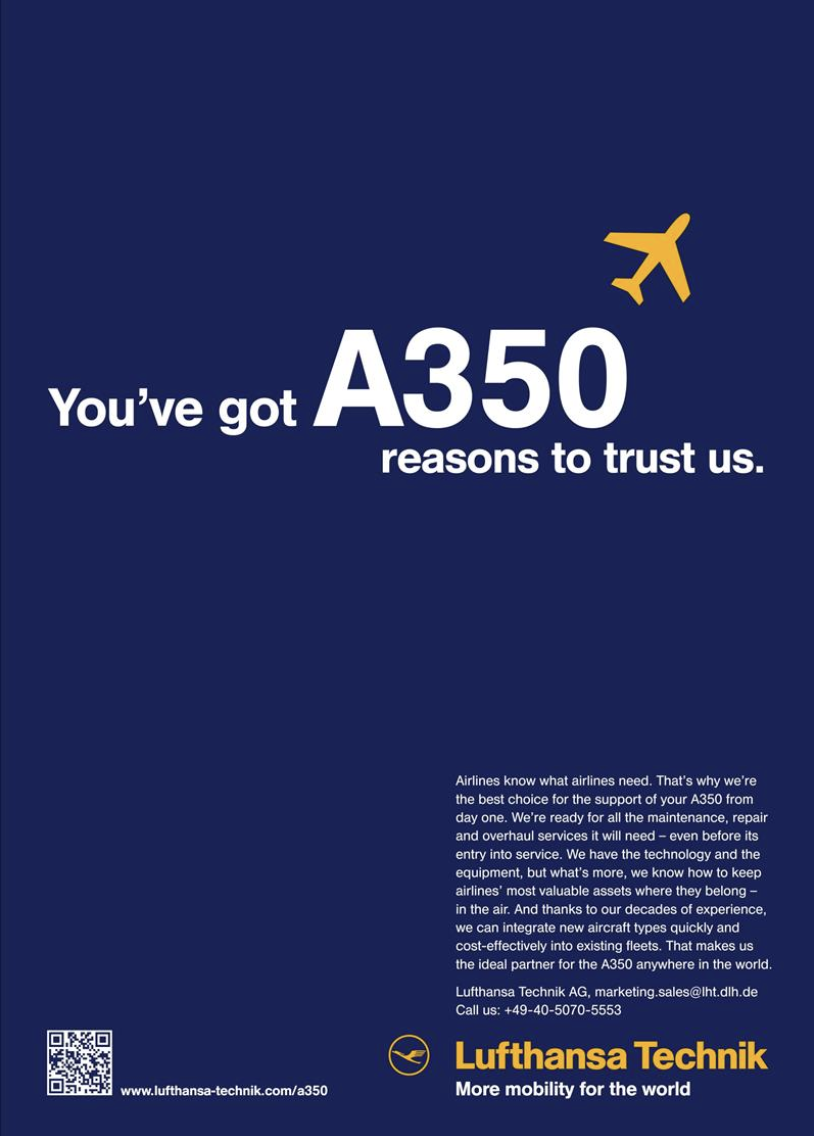 Lufthansa Technik advertises why it believes it is the perfect partner for A350 maintenance. 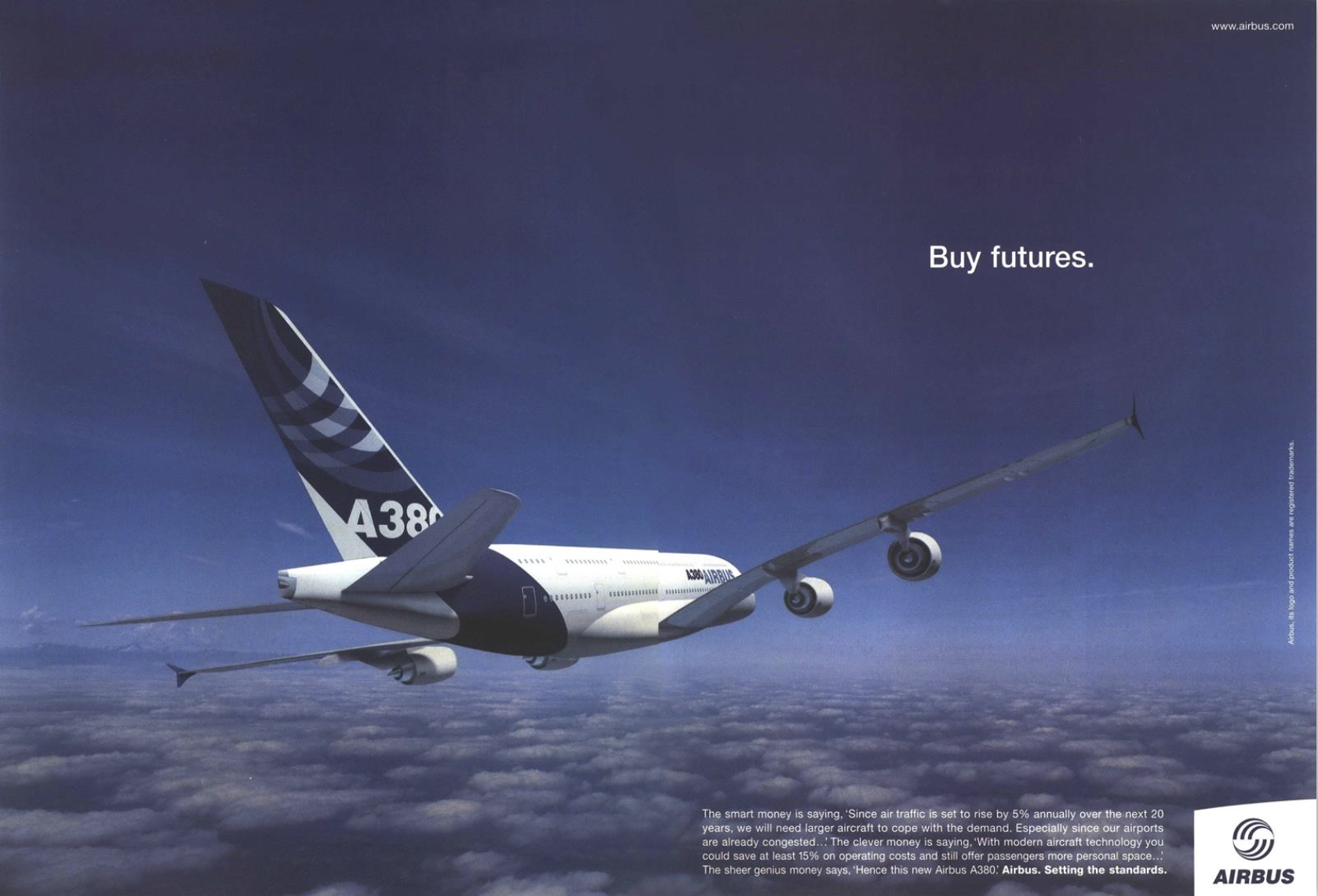 Three years before the actual first delivery and with air traffic expected to grow by more than 5% annually, Airbus is showcasing the potential of its latest product, the A380. 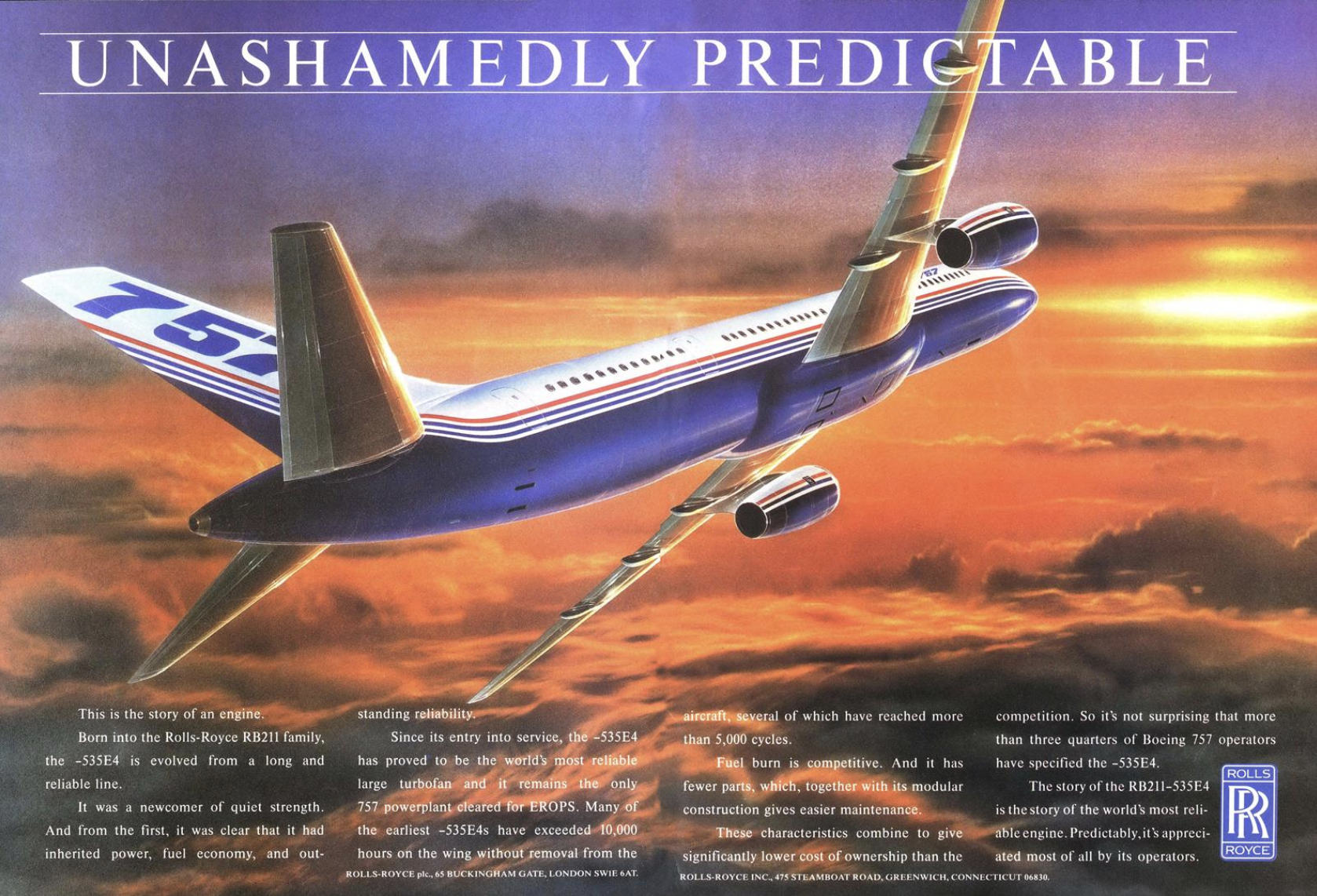 As the sun sets behind a Boeing 757, Rolls-Royce celebrates the story of the RB211-535E4 engine. A poetic story in the advert aiming to inspire confidence in its reliability. 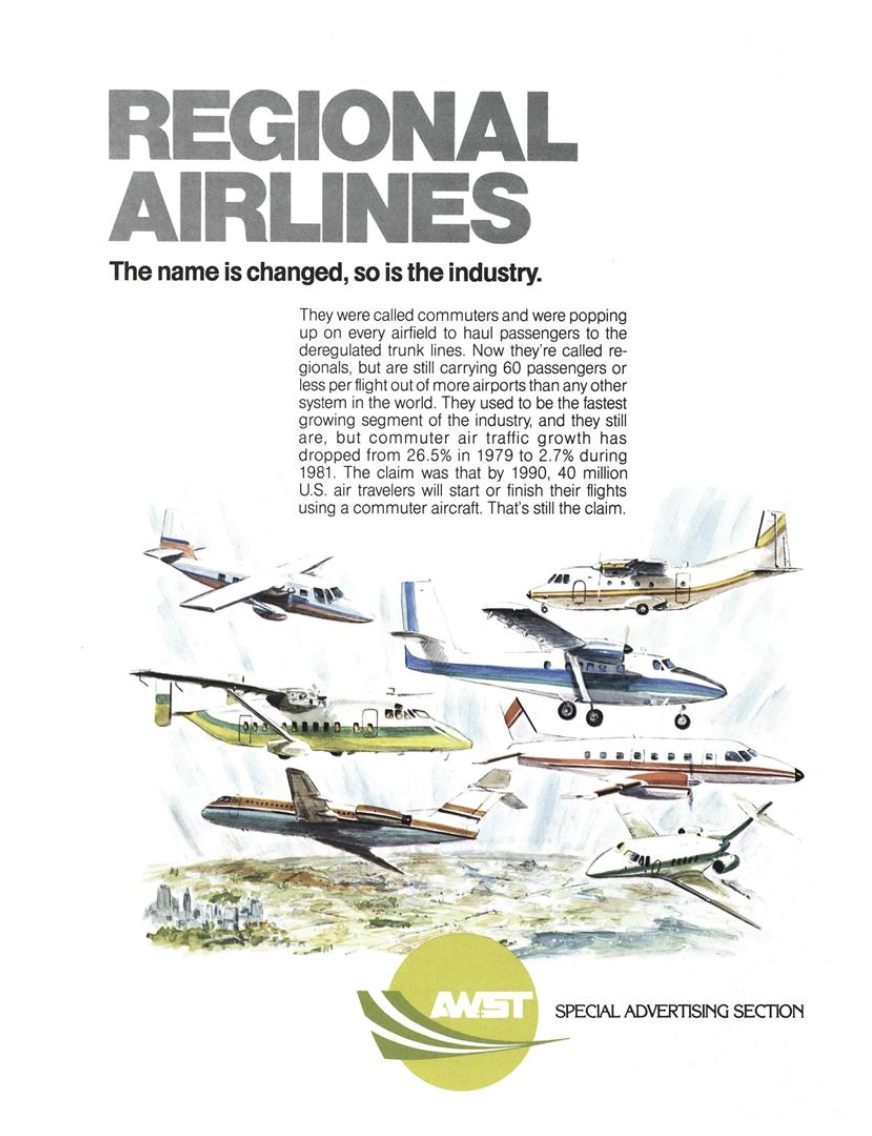 A short look at the current position of regional airlines. Much smaller at the time, their growth is questioned here in the AWST ad. 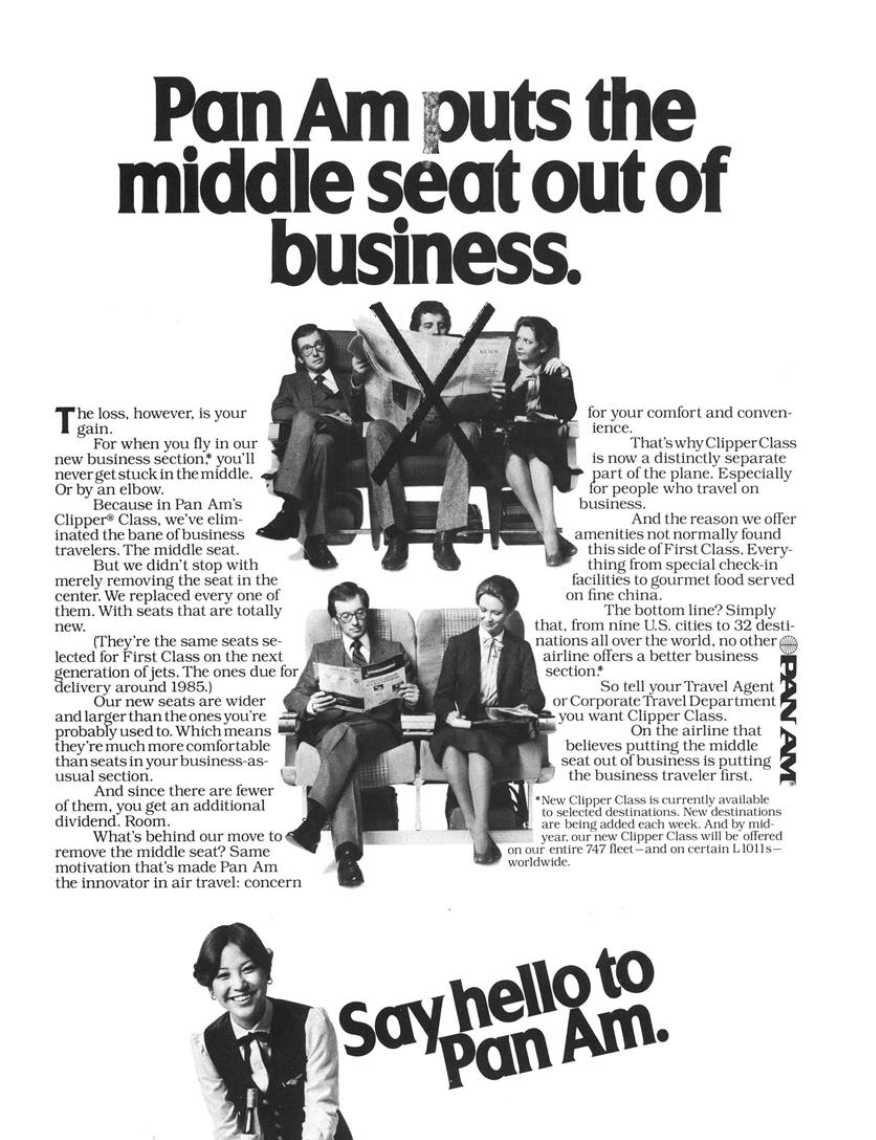 Pan Am show highlights that it removed the middle seat in its business class. Now passengers could enjoy their flight without being stuck in the middle, or being struck by an unwanted elbow from a fellow passenger. 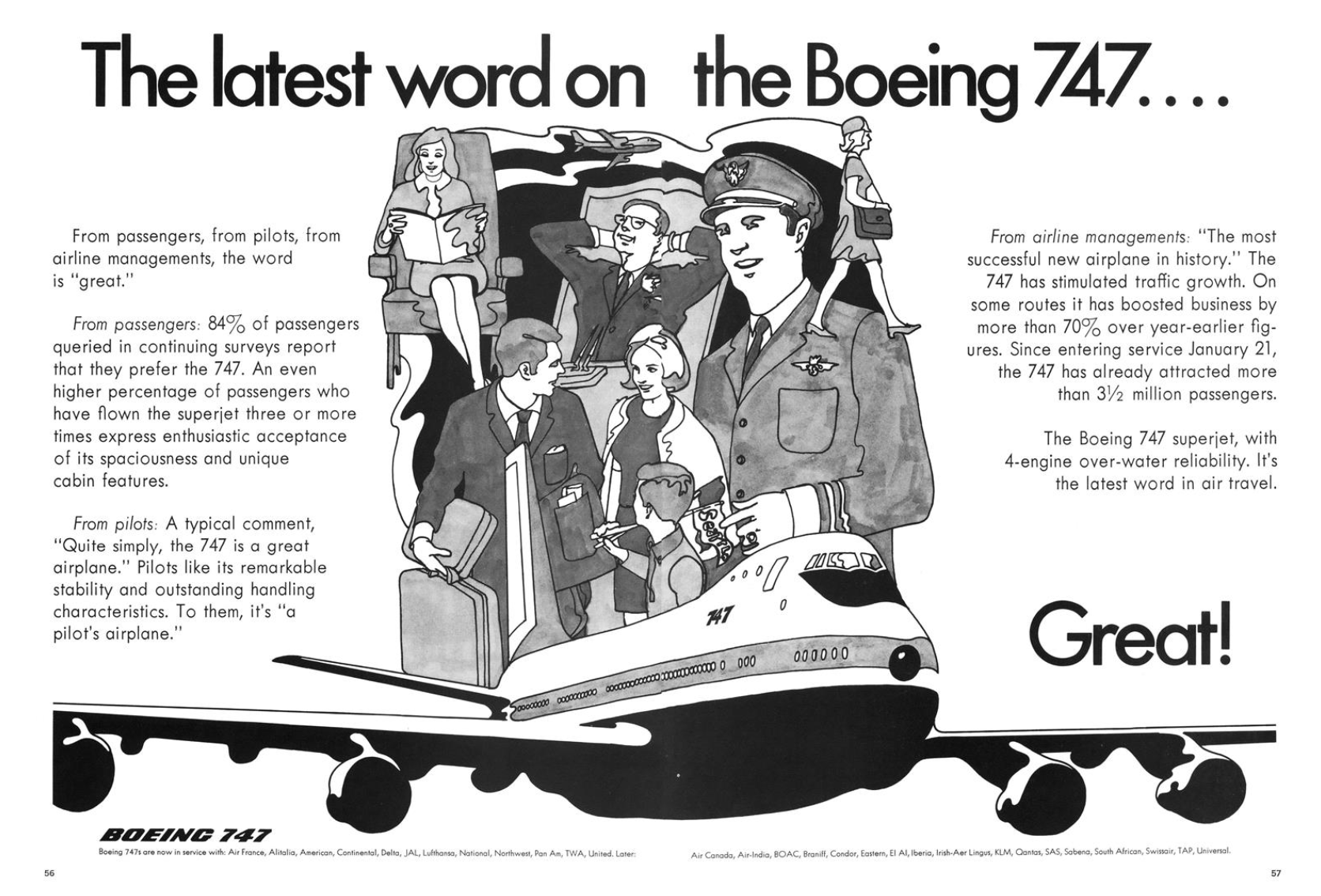 The Boeing 747 "superjet" was claimed by 84% of surveyed passengers to be the airliner of choice. Passengers and pilots alike assisting in the advertisement of "the most successful new airplane in history." 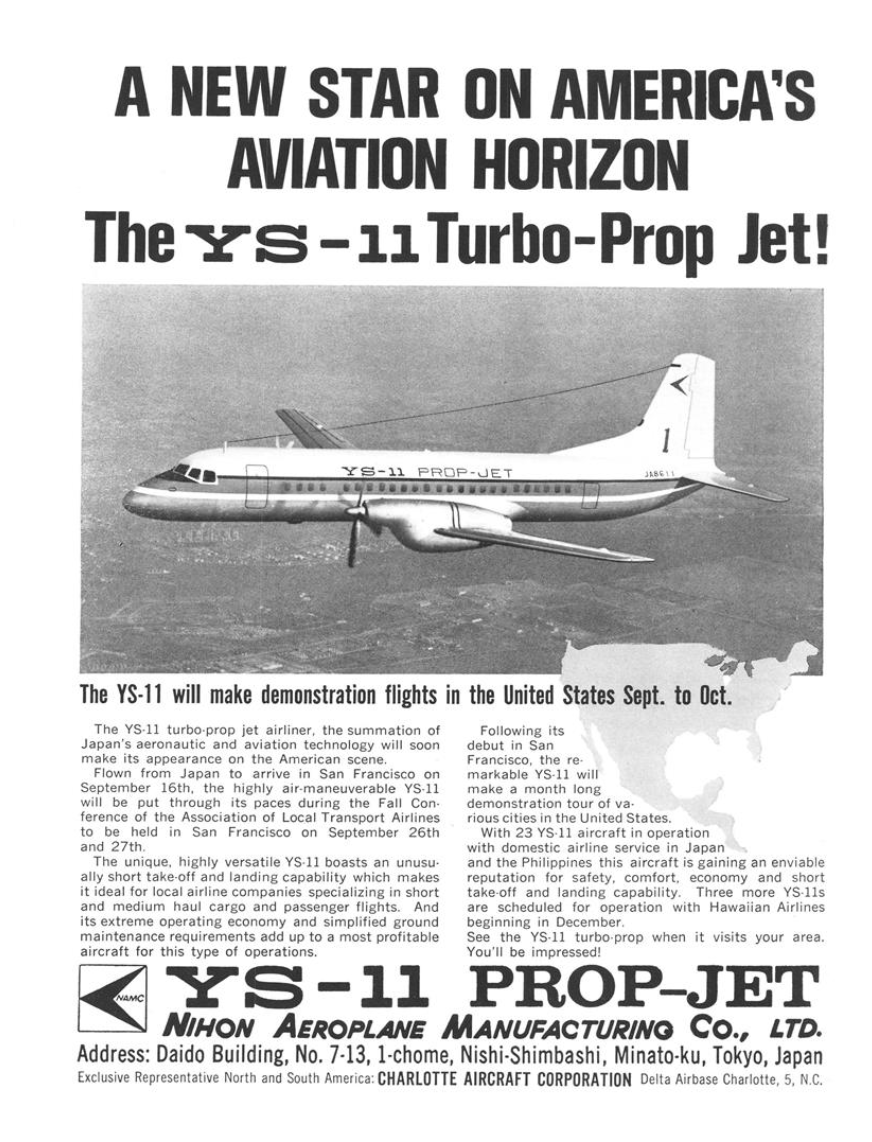 An advert for the NAMC YS-11 turboprop, the last indigenous Japanese large commercial aircraft ahead of the stalled attempt to bring the Mitsubishi SpaceJet to market. 182 YS-11s were built between 1962 and 1974. 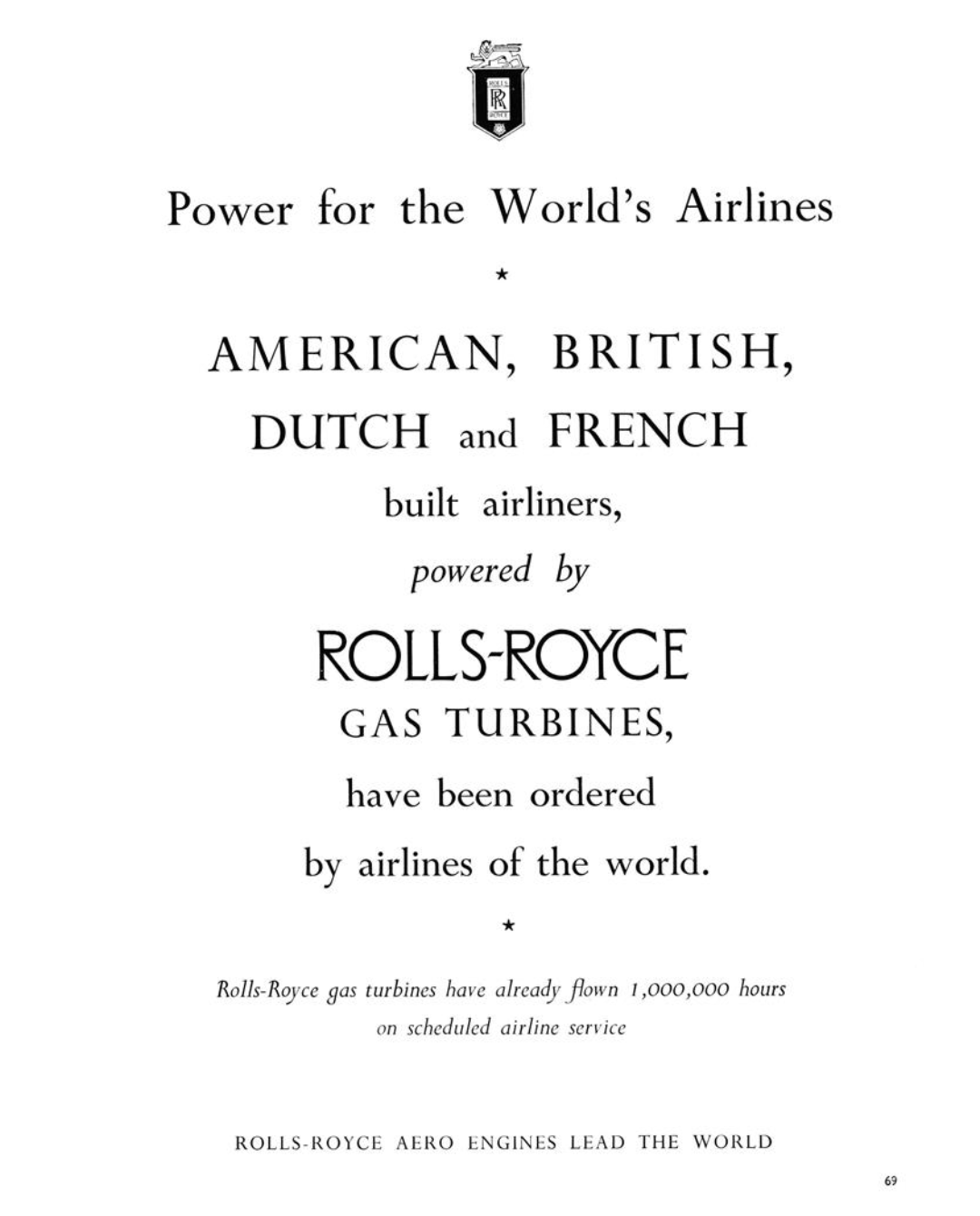 A simple ad in 1956 of the international spread of airliners using Rolls-Royce engines. Airlines around the world had them on order and over 1,000,000 flight hours had been achieved. 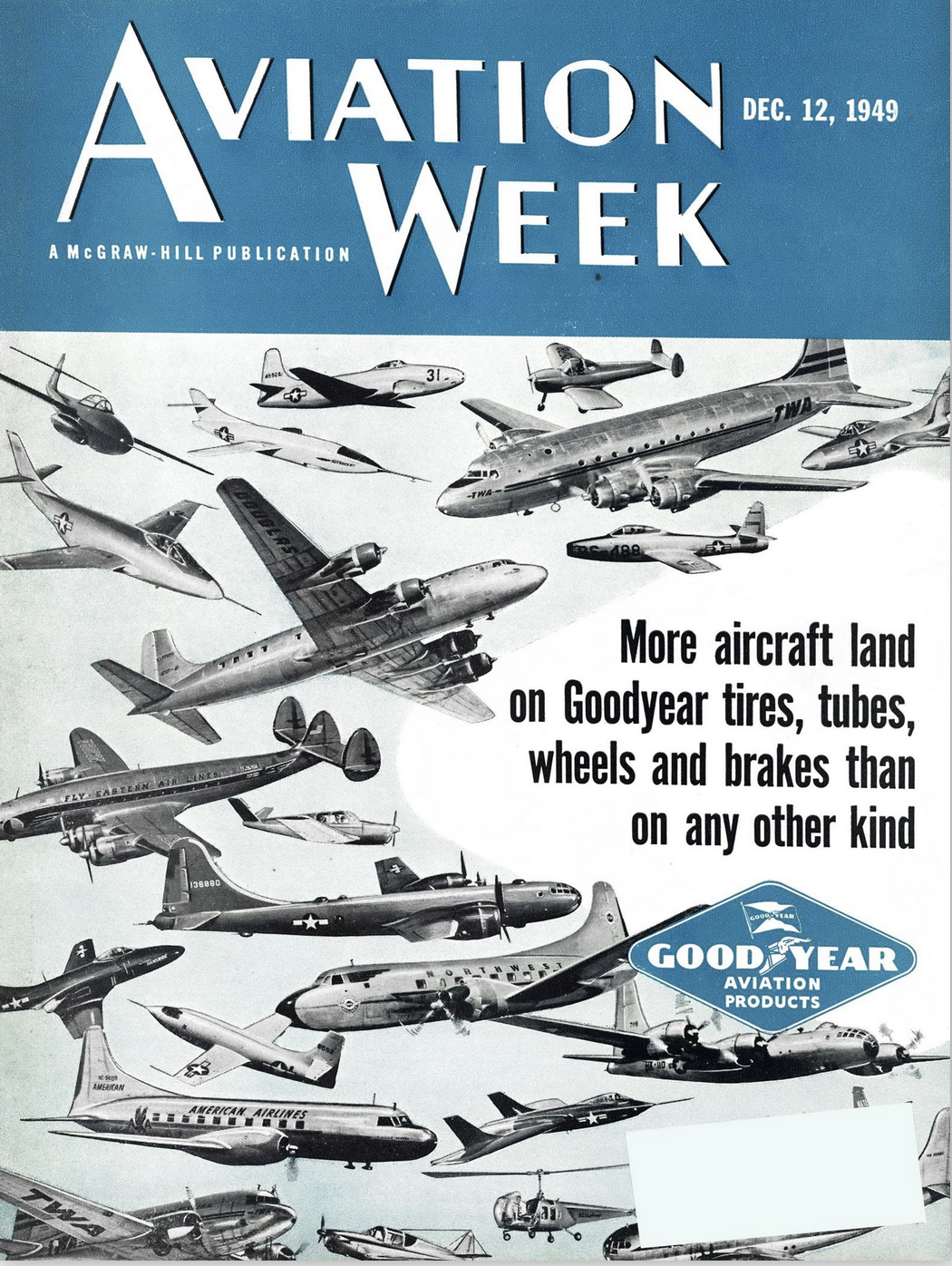 During the 1930s and 1940s Aviation Week's cover was used for advertising purposes. Here we can see Goodyear's tires, tubes, wheels and breaks being used throughout the industry. 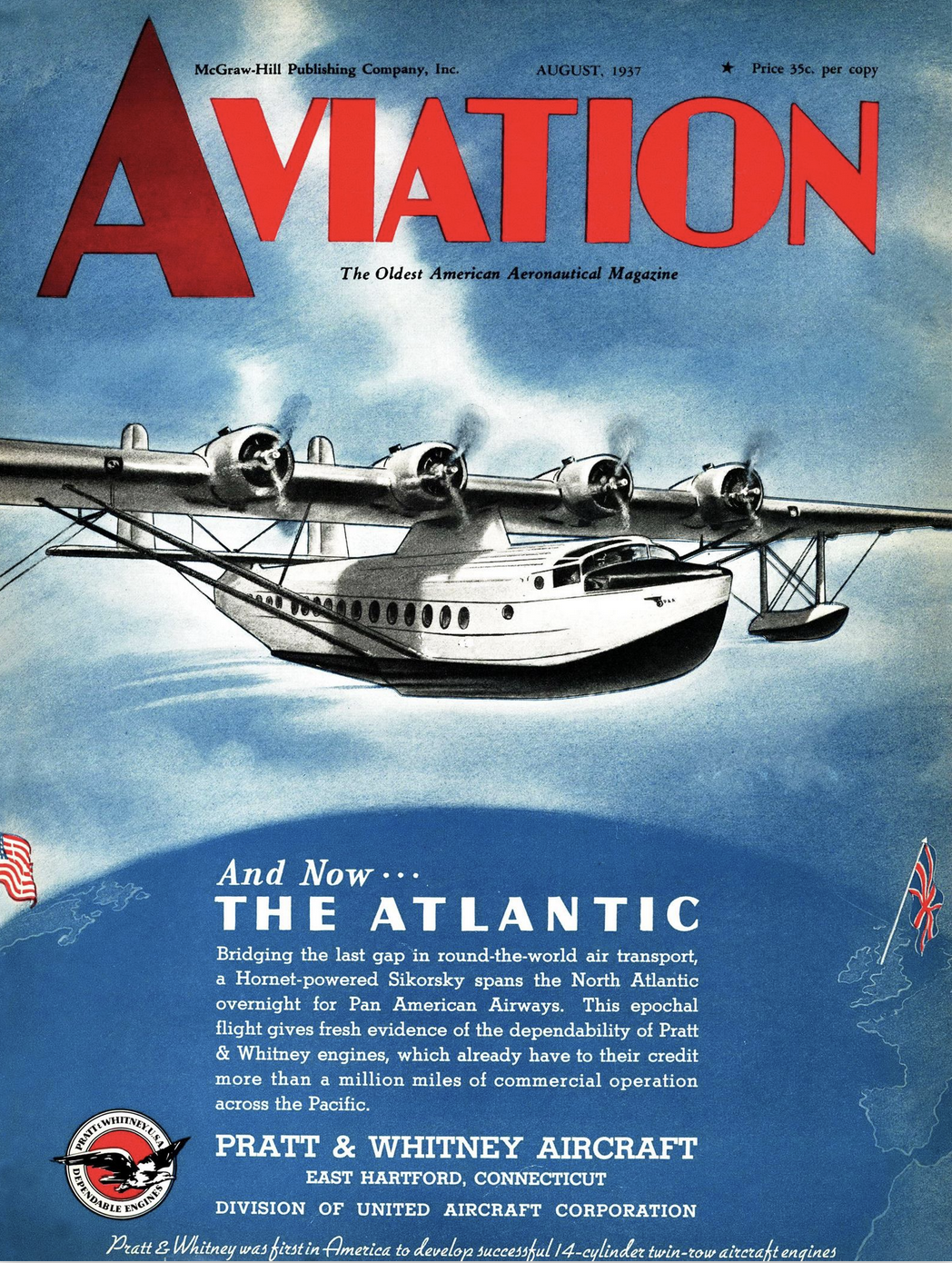 During the 1930s Pratt & Whitney was a regular feature on the Aviation Week & Space Technology covers (the magazine was known as just Aviation at this time in its history). Aiming to bridge the last gap in round-the-world air transport, a Hornet-powered Sikorsky flew across the Atlantic overnight with Pan American Airways. 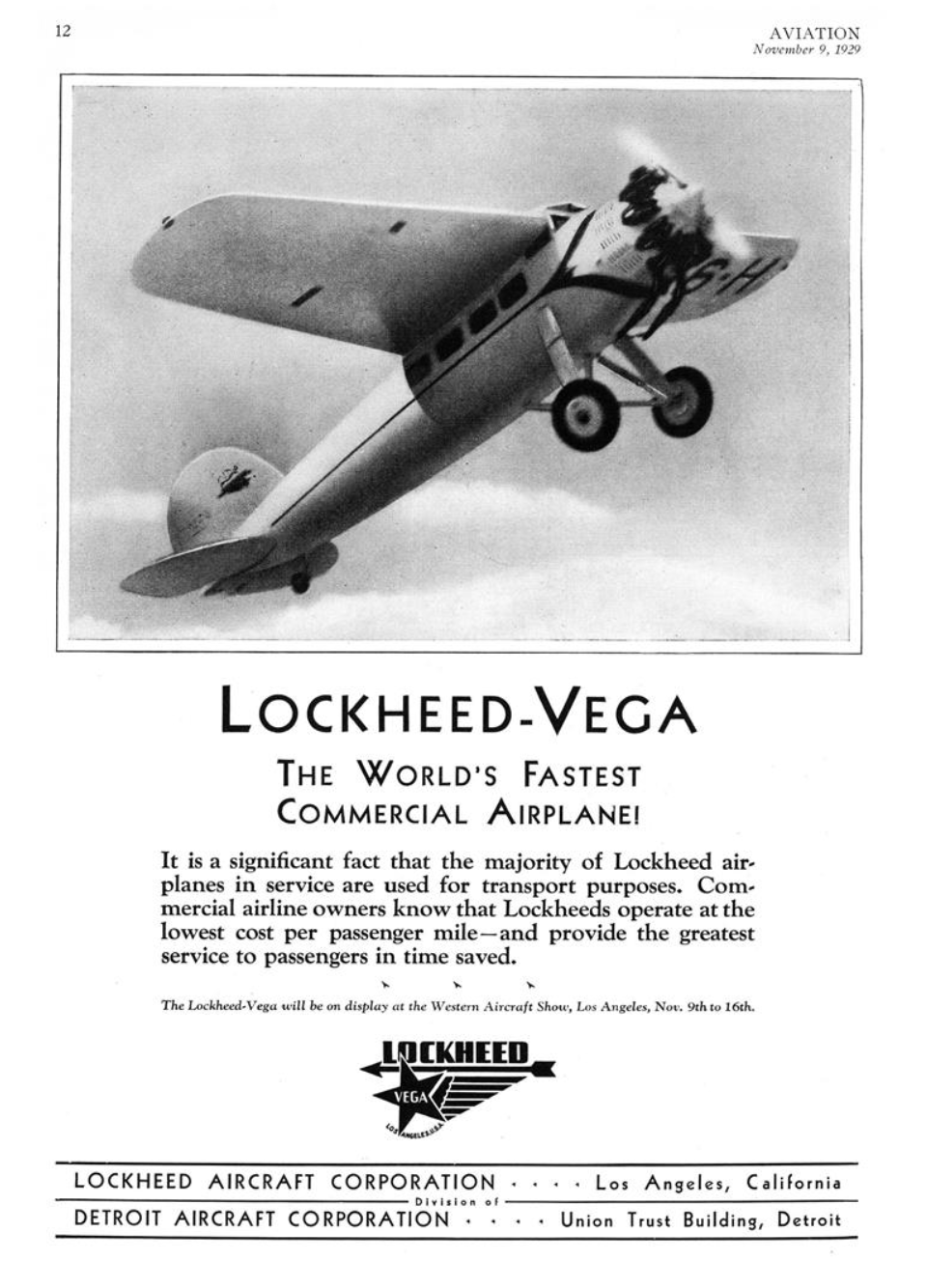 In 1929, most Lockheed airplanes were used for air transport purposes. Providing 'the greatest service to passengers in time saved' Lockheed Vega was the world's fastest commercial airplane.

It is the United Nation's International Civil Aviation Day on December 7, and in celebration we take a look back through some civil aviation adverts that have featured in Aviation Week & Space Technology over the last century. Learn why Pan Am removed the middle seat and why Pratt & Whitney dominated the magazine covers in the 1930s and more.

1 Comment
skywayparkblue
Tue, 12/07/2021 - 20:22
The 1949 cover is interesting, but -- Air Force F-80, 84, 88, 89, B-29, B-50. The Air Force was heavily involved in the X-1 and Larry Bell wanted it considered as point defence interceptor -- not a great idea. The G367/377 at the lower right may or may not be a C-97.Navy F9F, F2H, F7U, and the D558-II, which never flew in the sexy configuration illustrated, was strongly Navy. Of course the DC-3, 4, and 6 and Connie had strong military involvement. The Globe Swift and Beechcraft with its cool and problematic tail did not, so far as I know. That Bell? helicopter I think may have come in a military version? WW II and the Cold War amplified the role of the military in the life of the nation. That F(or P)-80 looks odd. Could that be from the National Air Races. I seem to recall the guys from Wright cheated and won.
Bernard Biales