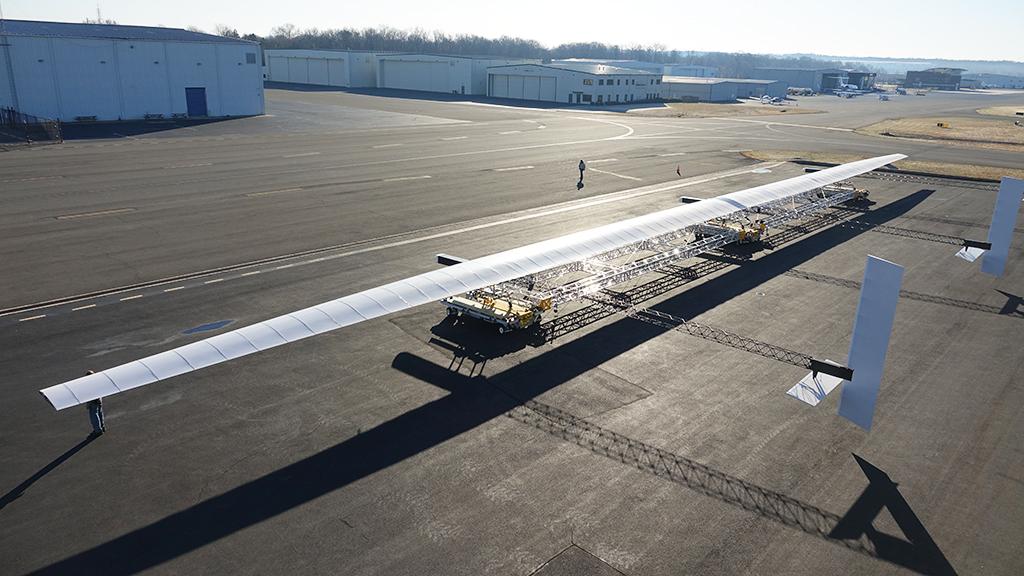 Aurora’s Odysseus team illustrates the size of the aircraft, which is designed to stay aloft for up to three months.

To accommodate bending of the wing in flight, the structure resembles a bridge in its construction. Adjacent skin panels are bonded to V-shaped “spring-gap” expansion joints at the ribs so they can move relative to each other as the wing bends. The upper skin panels are glass fiber, to carry the aerodynamic pressure loads, while the more lightly loaded lower wing, fuselage and tail skins are plastic film.

“It is designed to be as low-risk as possible, if you can ever call an aircraft like this low-risk,” says Langford. Payload “is large by the standards of solar aircraft—not Vulture’s 1,000 lb. but more than 55 lb., which is within the state of the art with today’s solar cells and batteries,” he adds. Odysseus uses available lithium-polymer batteries and thin-film gallium-arsenide solar cells. “This is a no-miracles aircraft,” says Langford. 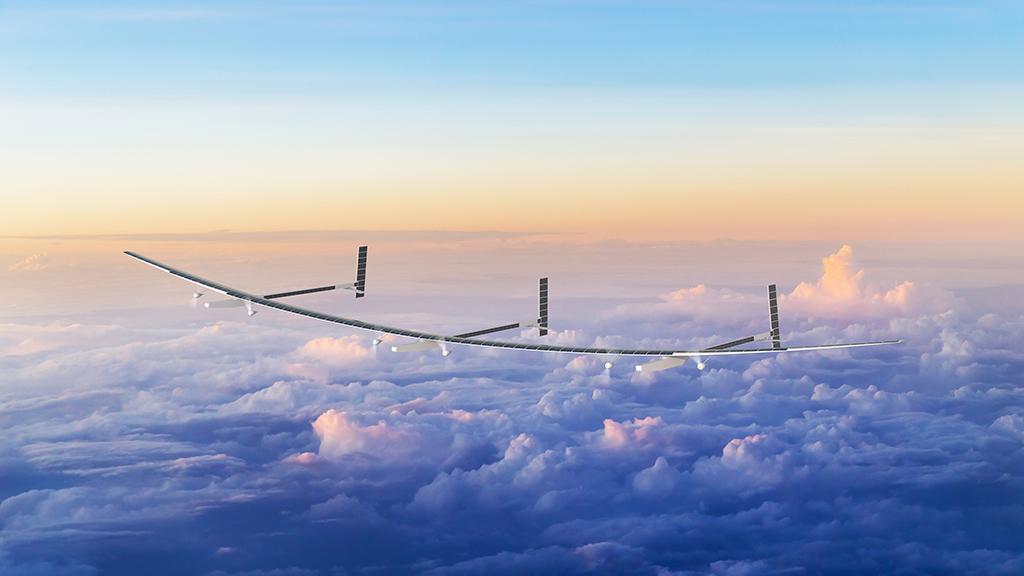 With a wingspan longer than that of a Boeing 777X, the aircraft has three tails and six propellers. All-moving vertical and horizontal tail surfaces mounted on the three fuselages provide pitch and yaw control. The outboard tails also warp the wing for roll control as there are no control surfaces on the wing itself.

The first Odysseus is battery-powered for test flights, with one solar test panel on the 243-ft.-span wing. 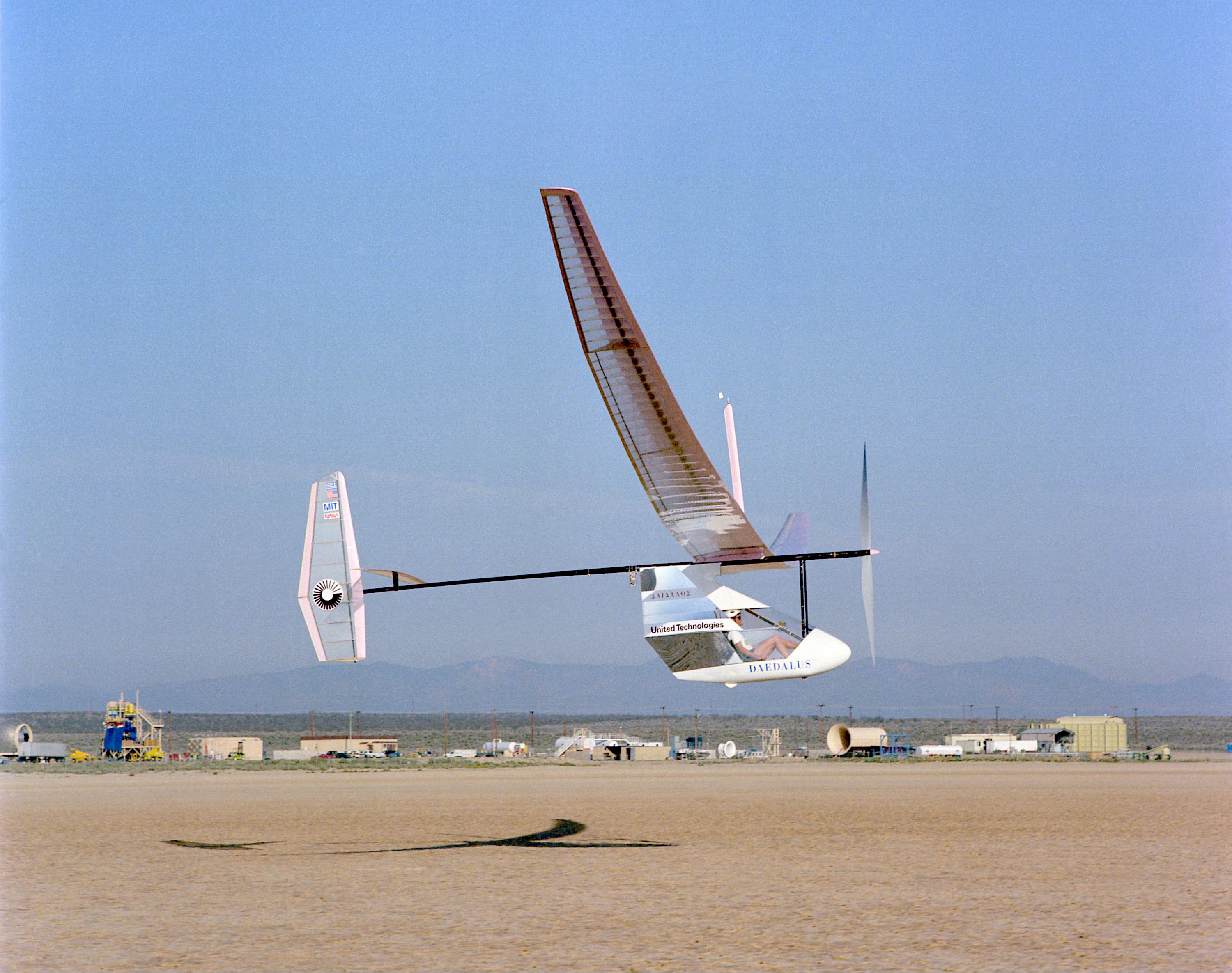 Aurora CEO John Langford has wanted to build a stratospheric solar aircraft since he led the Massachusetts Institute of Technology team that set three human-powered flight records in 1988 with the Daedalus. The distance and duration records set on the 72.4-mi. flight between the Greek islands of Crete and Santorini still stand today. 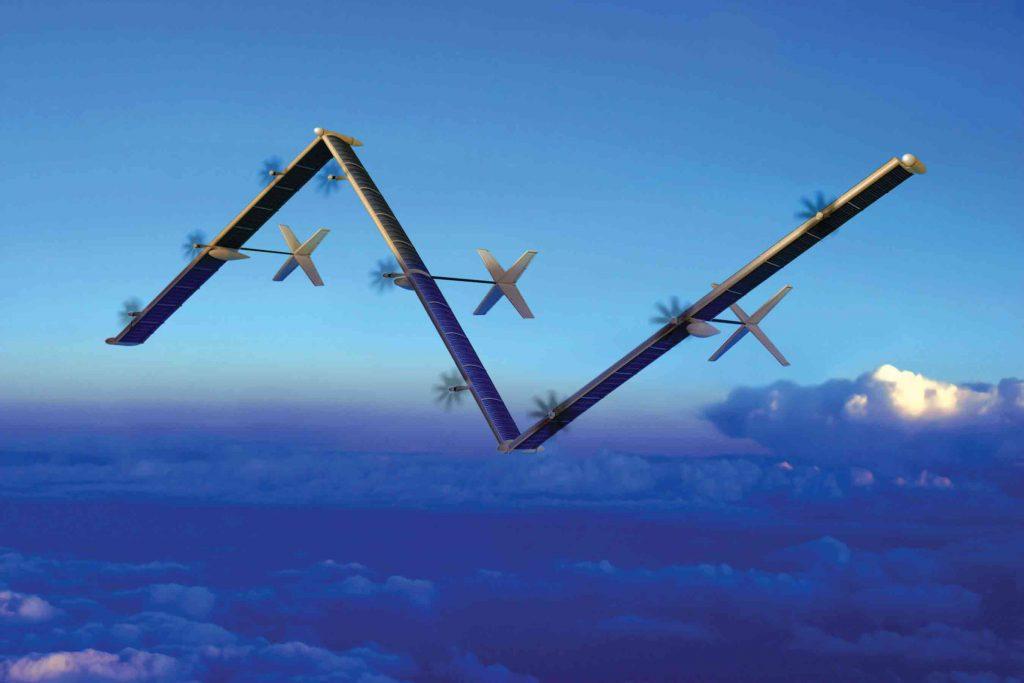 Selected in 2008 for Phase 1 of DARPA’s Vulture program to develop a UAV that could stay aloft in the stratosphere for at least five years, Aurora came up with a unique solution. Also called Odysseus, this comprised three unmanned aircraft that took off separately then joined up in flight to form a massive Z-wing UAV. By day, the wing would fold into a Z shape to maximize solar energy collection. By night, the wing would stretch out flat to minimize energy consumption. 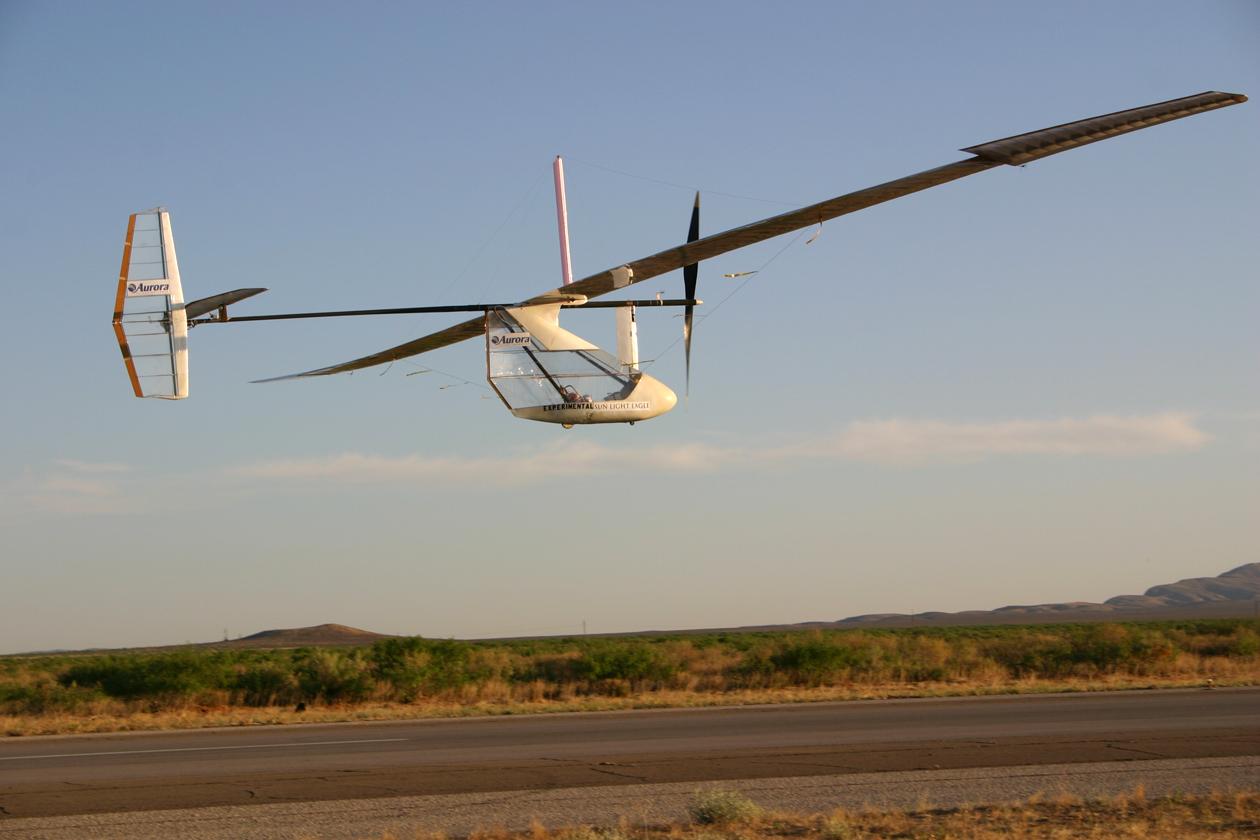 As part of the Vulture program, Aurora took the human-powered Light Eagle, a predecessor to the Daedalus, and modified it to a solar-powered unmanned aircraft. The resulting 114-ft.-span, 173-lb. Sunlight Eagle made two flights as Las Cruces International Airport, New Mexico, in 2009, contributing to the wealth of experience Aurora has brought to the Odysseus.

<p>Aurora Flight Sciences has returned to its roots under new owner Boeing and built a massive solar-powered unmanned aircraft designed to stay aloft in the atmosphere up to three months.</p>

<p>The 243-ft.-span (74-m) Odysseus is in ground testing, split into three sections because it is too big to fit in the hangar here at Aurora&rsquo;s headquarters in Manassas, Virginia. On completion of the tests, the aircraft is to be shipped by container to Puerto Rico in late February 2019 to begin flight testing. A second aircraft is under construction, and work is beginning on a third.</p>