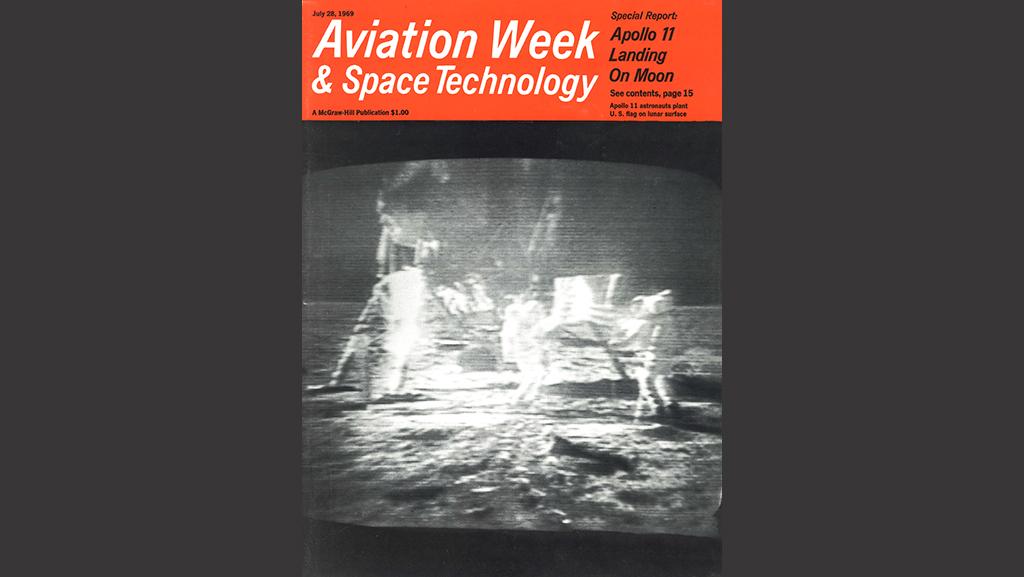 Astronauts Neil A. Armstrong and Edwin E. Aldrin, Jr., plant a U.S. flag on the Sea of Tranquility 46 min. after Armstrong took man’s first step on the lunar surface. Wire stiffening holds out flag in the near vacuum environment. 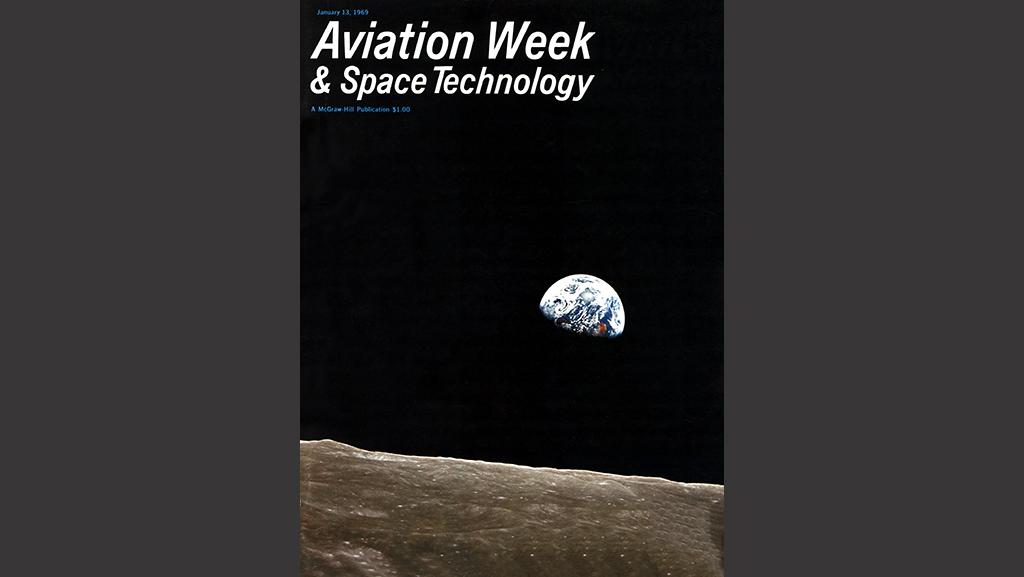 Earth—with north at the right and the sunset terminator cutting through Africa—rises above the horizon as the Apollo 8 spacecraft emerges from behind the far side of the moon for the first time Dec. 24 after the successful burn for lunar orbit insertion. 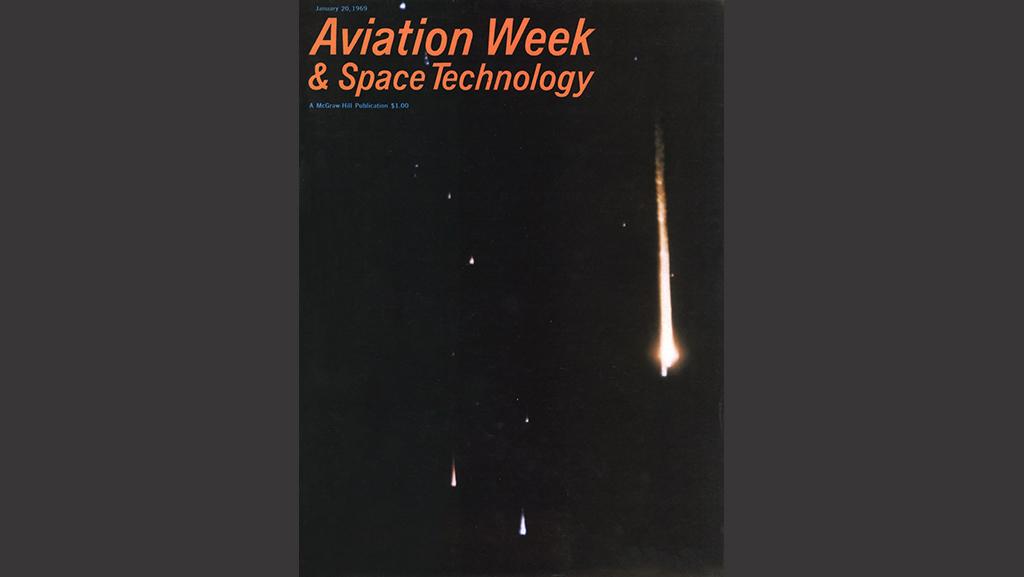 Apollo 8 re-entry over the Pacific Ocean leaves a broad orange and white plume (right) surrounded by glowing orange, green and blue haloed pieces of the service module. Photo was taken for NASA from an Air Force Airborne Lightweight Optical Tracking System camera aboard a USAF/Boeing KC-135A at 40,000 ft. 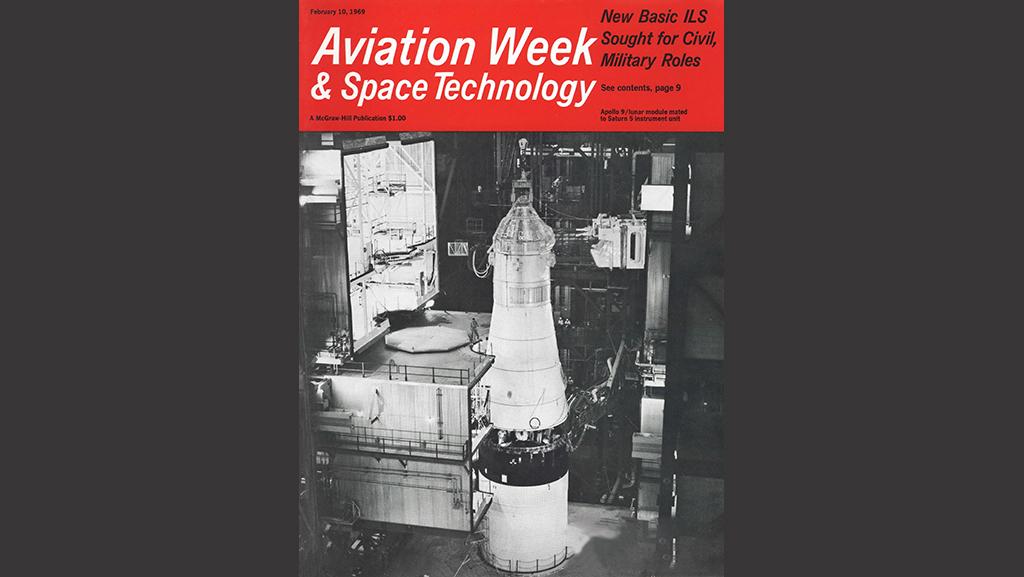 Lunar module (enclosed within adapter) and command and service modules for the Apollo 9 mission are mated with the Saturn 5 instrument unit in the Vehicle Assembly Building at Kennedy Space Center. The Apollo 9 flight, scheduled for launch Feb. 28, will involve a complete evaluation of the lunar module in earth orbit. 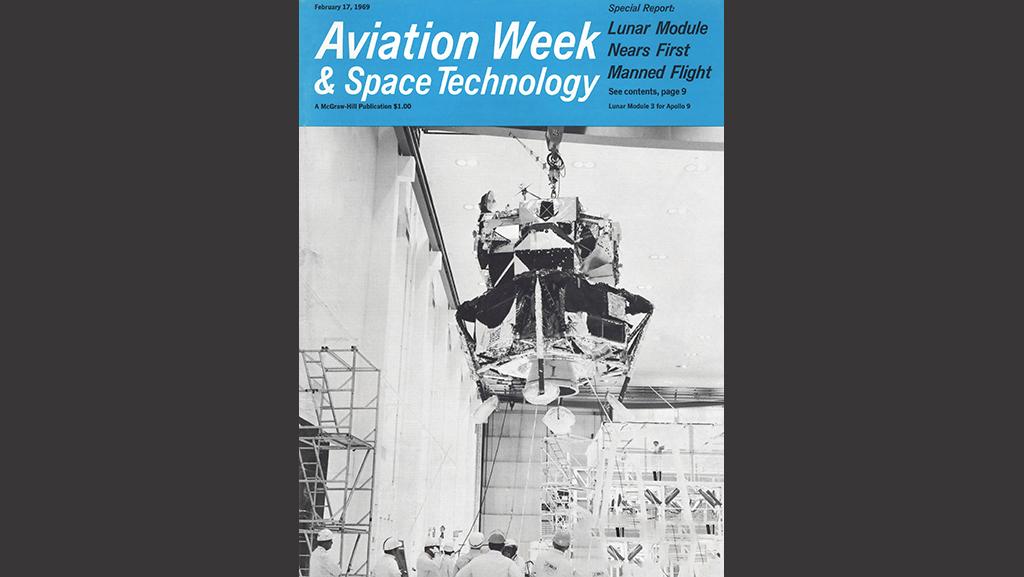 Grumman’s Lunar Module 3 undergoes checkout at Kennedy Space Center in preparation for the first manned flight test of the vehicle on the Apollo 9 mission, scheduled for launch Feb. 28. In the photo, LM 3’s landing gear is retracted and skin panels are removed for tests. 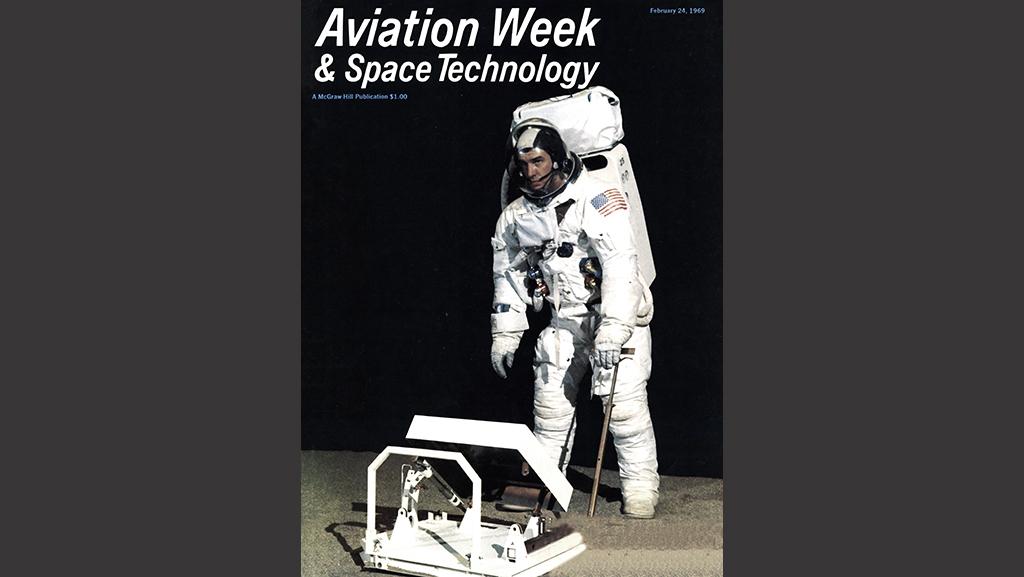 Laser ranging retro-reflector, part of the Early Apollo Scientific Experiment Package to be placed on the moon by astronauts this year, is prepared for checkout at NASA’s Manned Spacecraft Center. The reflector and a passive seismometer have been developed by Bendix Corp.’s Aerospace Div. 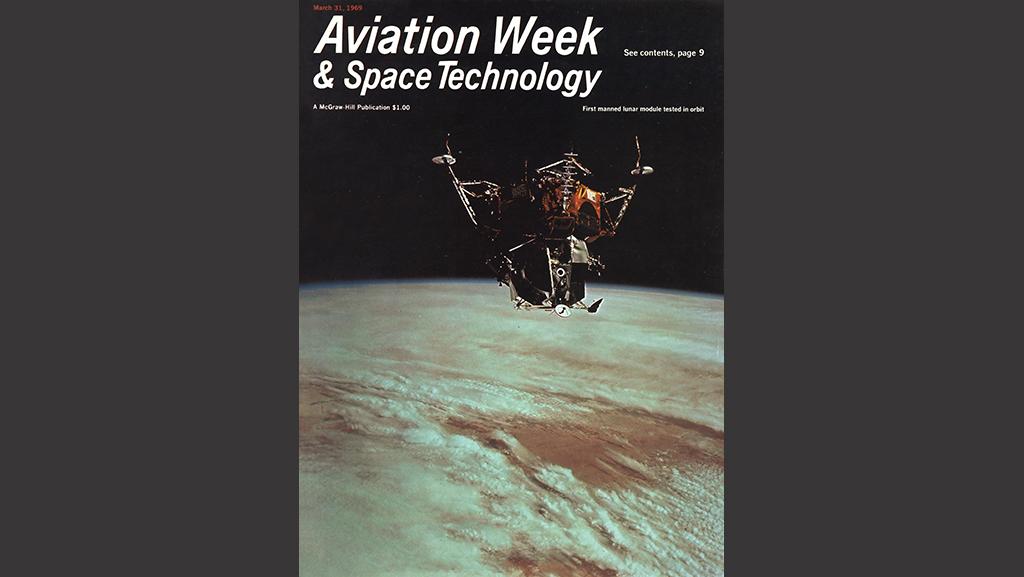 Grumman lunar module is exercised in orbit by Astronauts James A. McDivitt and Russell L. Schweickart during Apollo 9 mission. Landing gear of the LM has been extended. Vehicle is inverted in relation to earth, with ascent stage at the bottom. 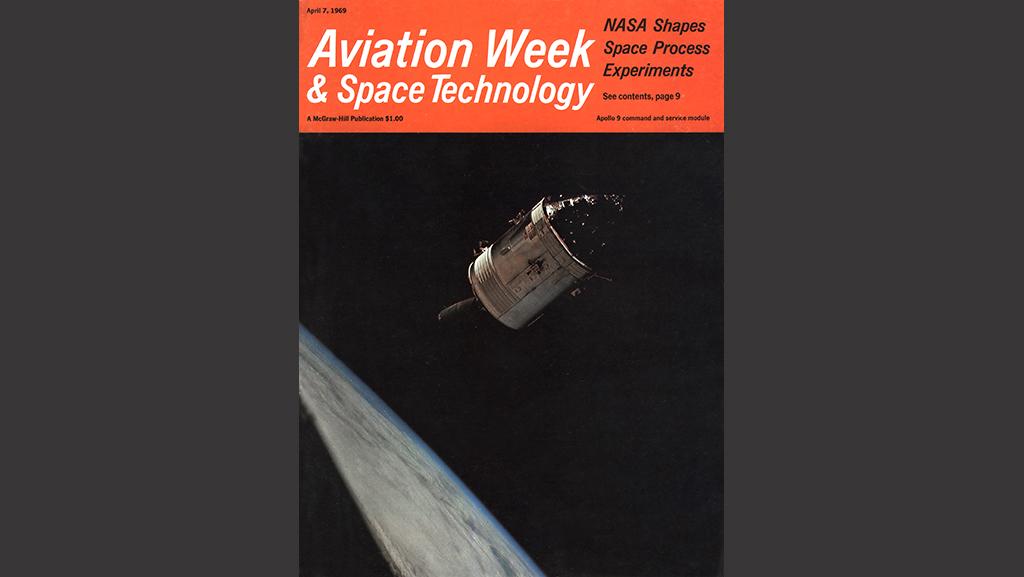 Apollo 9 command and service module is shown in orbit as photographed by Col. James A. McDivitt and Russell L. Schweickart from the lunar module on the fifth day of the spacecraft’s 10-day mission ended Mar. 13. Col. David R. Scott remained at the controls in the command module while Col. McDivitt and Schweickart checked out the LM. 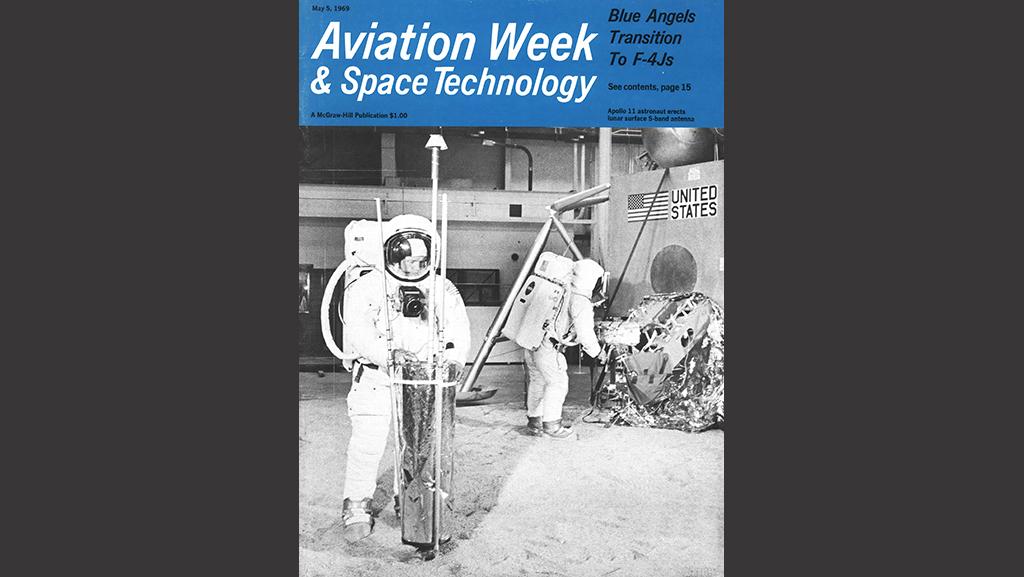 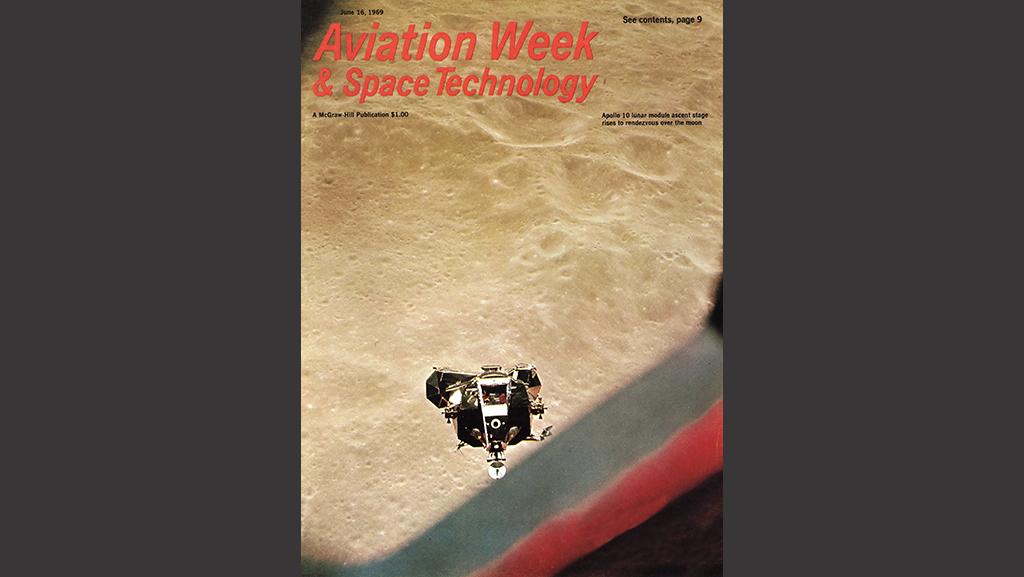 Inverted ascent stage of the Apollo 10 lunar module rises to rendezvous and dock with the command module, from which this photograph was made by Astronaut John W. Young. Nozzle of the ascent stage engine is at the top of the lunar module, with the rendezvous radar antenna at the bottom. 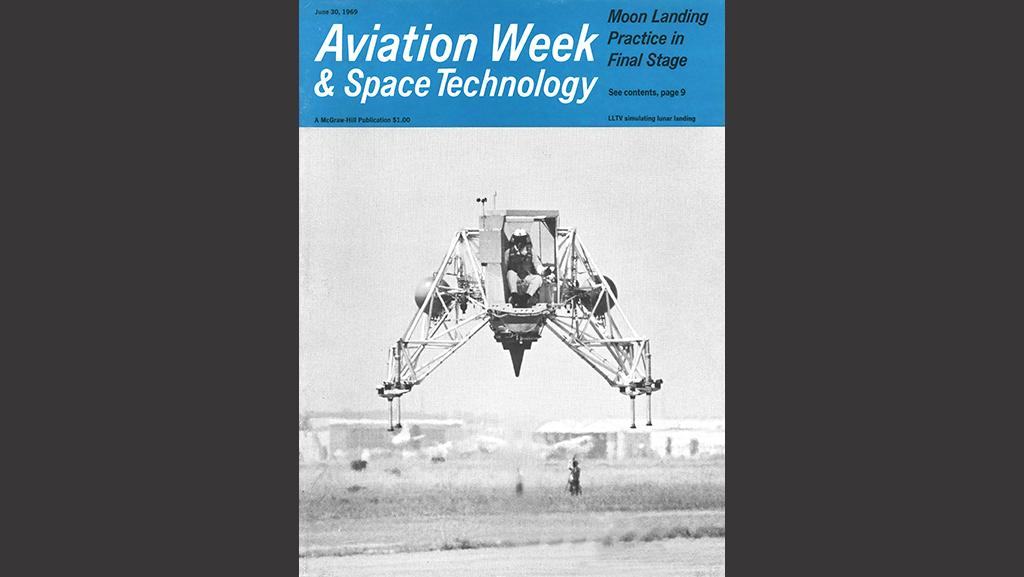 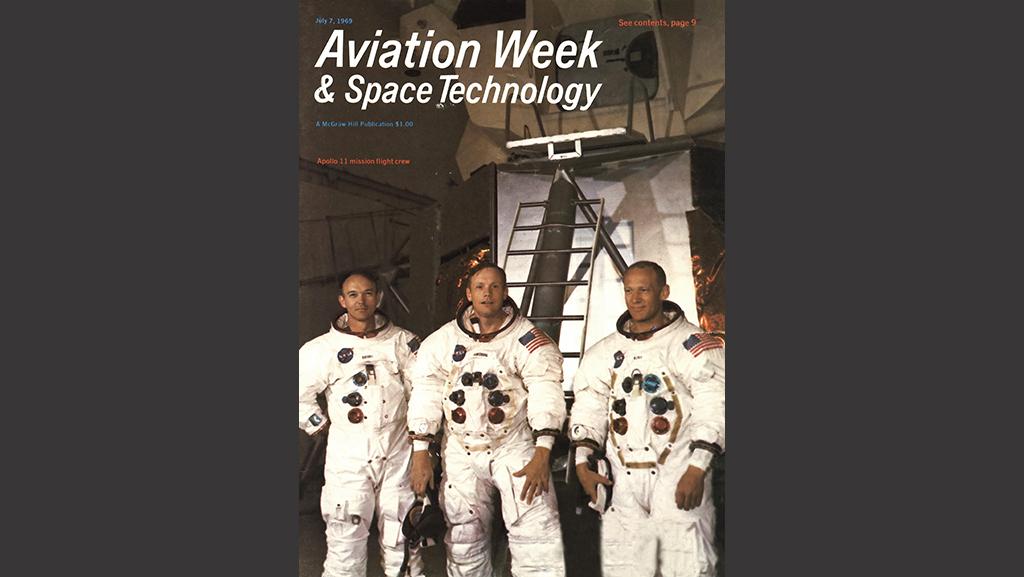 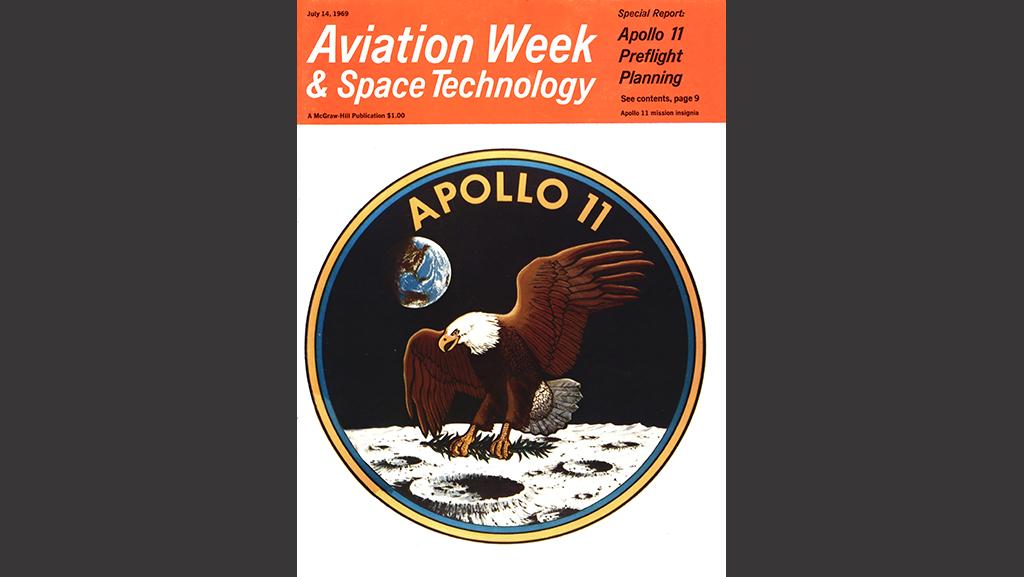 Apollo 11 patch for man’s first landing on the moon, scheduled for July 20, symbolizes the seal of the U.S. The eagle clutches only olive branches, rather than an olive branch and arrows as in the original seal. Eagle is code name for lunar module, Columbia for the command module. Design by the Apollo 11 crew. 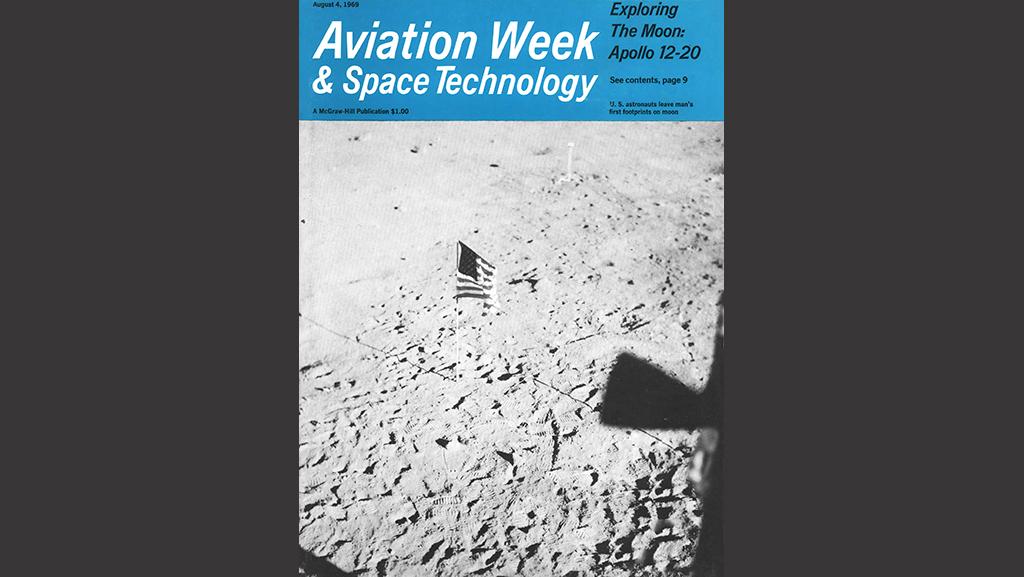 Footprints of astronauts Neil A. Armstrong and Edwin E. Aldrin, Jr., stand out clearly around flag of U.S. on moon. In far background is the deployed black and white lunar surface television camera which televised the lunar extravehicular activity. Photograph was taken from right window of lunar module. 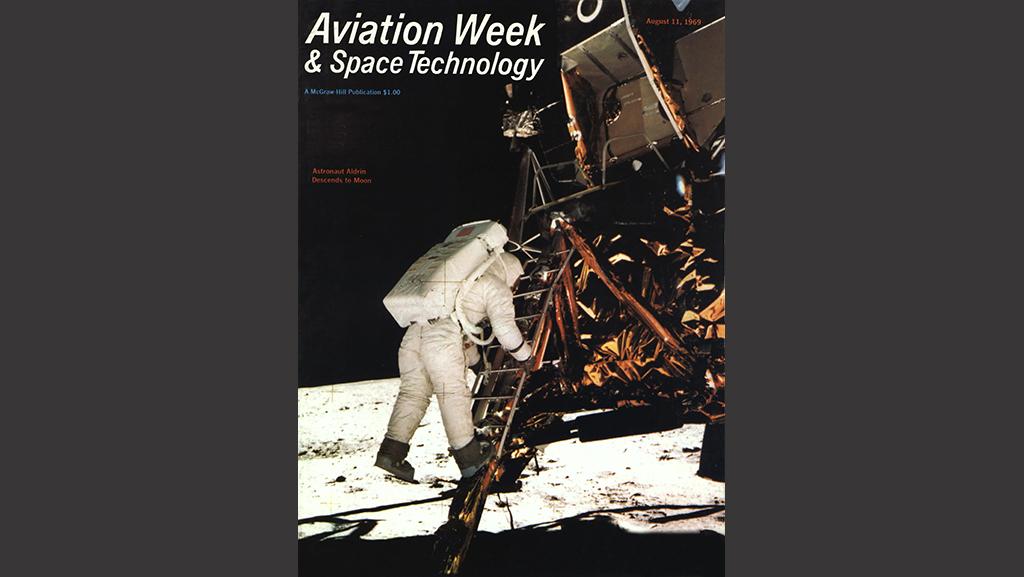 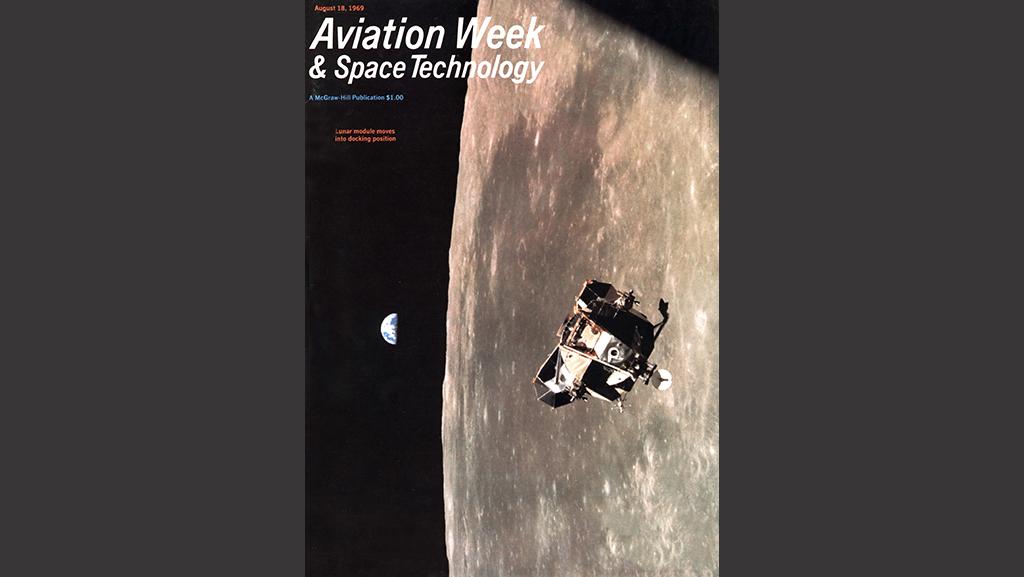 Astronaut Michael Collins, alone in the lunar orbiting command/service module of Apollo 11, made this dramatic photo of the lunar module as it was making its approach for docking. View is looking west along moon’s equator, with earth clearly visible off moon’s horizon. Large, dark area beyond lunar module is Smyth’s Sea on the moon’s nearside. 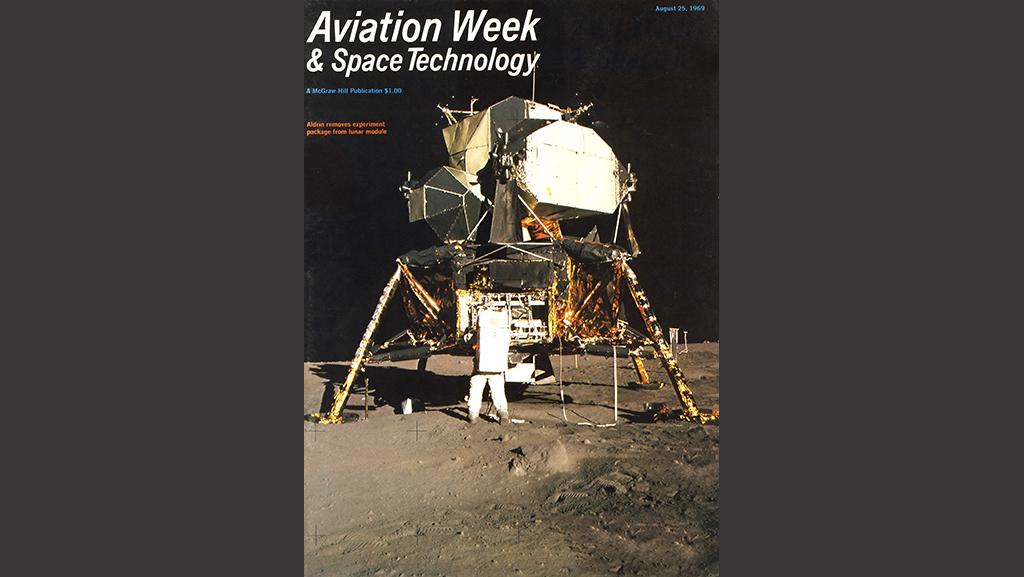 Astronaut Edwin E. Aldrin is dwarfed by the lunar module on the surface of the moon. Aldrin was at the modularized equipment stowage assembly removing the lunar scientific experiment package when this picture was made by Neil A. Armstrong. Note footprints in foreground where astronauts walked earlier.

Aviation Week & Space Technology makes a cameo near the end of “First Man,” the new movie about Apollo 11 astronaut Neil Armstrong. Two copies of the magazine’s July 28, 1969, issue are among the reading material provided to Armstrong, Edwin E. "Buzz" Aldrin and Michael Collins during their 21-day quarantine following their return from the Moon on July 24. The cover featured a grainy image of Armstrong and Aldrin planting a U.S. flag on the Sea of Tranquility 46 min. after Armstrong became the first person to set foot on the Moon. It was one of 17 Apollo covers run by the magazine that year on Apollo 11 and its precursor missions, Apollo 8, 9 and 10. Those covers and their original captions follow.