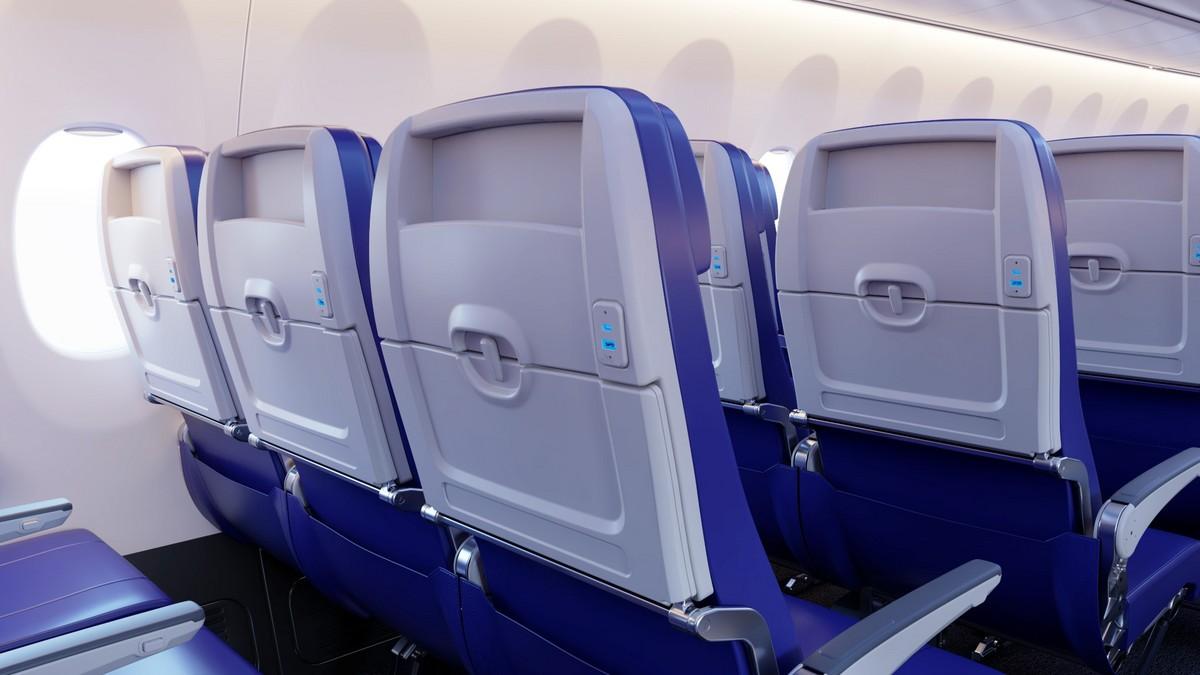 Southwest Airlines plans to invest more than $2 billion in its inflight experience, which includes installing latest-generation onboard USB A and USB C power ports on every seat in the aircraft, with a space-saving system that will not compromise legroom. The Dallas-based carrier plans to bring this new convenience and capability onboard Boeing 737 MAX aircraft beginning in early 2023. The plans also include enhanced Wi-Fi, more IFE content, and larger overhead bins with more space and easier access to carry-on items. 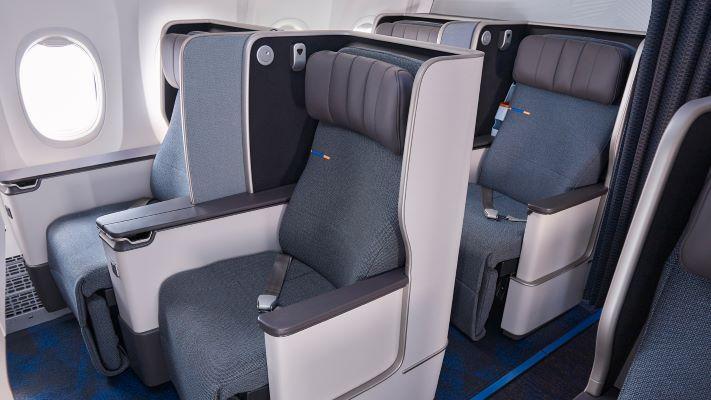 Flydubai has showcased its new Business Class seat offering to the travel trade industry at Arabian Travel Market (ATM) May 9-12, 2022. The new recliner seat will be gradually introduced to the Business Class cabin of flydubai’s fleet as part of an ongoing product development investment program. The new Business Class recliner seat, developed by HAECO, has been uniquely tailored by JPA Design to reflect the design values of the innovative flat-bed seat by Thompson, which is available on flydubai’s Boeing 737 MAX 8 and 9 aircraft. 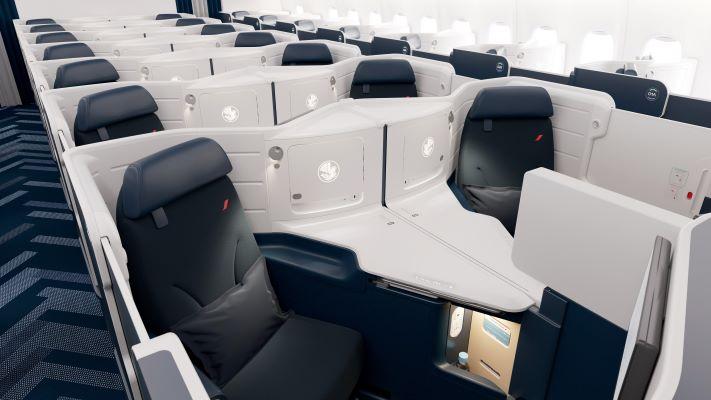 Air France is investing €140 million ($148 million) to upgrade the cabins of 12 of its Boeing 777-300 aircraft. The new business class cabin includes a new business class seat that transforms into a full-flat bed, a privacy panel and full access to the aisle for all passengers. The newly refitted 777 cabins will feature 48 business class, 48 premium economy and 273 economy seats and will be progressively rolled out from September 2022. First flights will go from Paris to New York JFK. 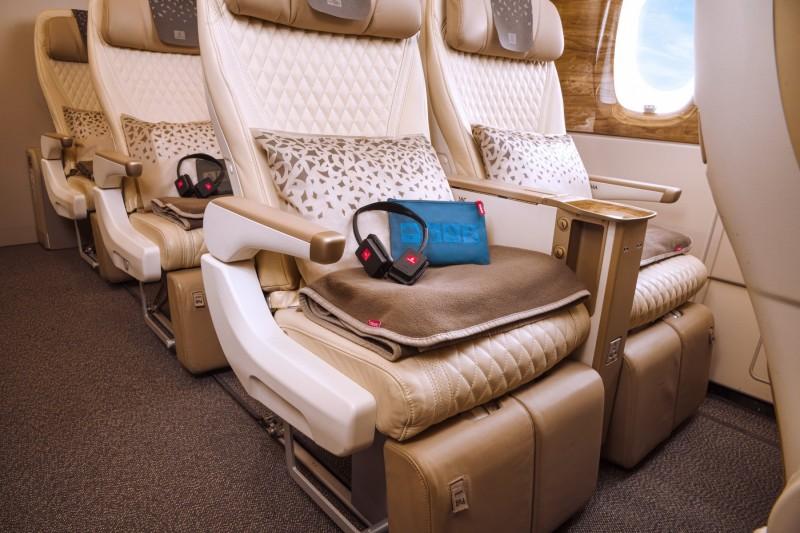 Emirates Airline plans to add its premium economy product on 120 of its widebody aircraft, building on the six Airbus A380s, which are already equipped with the new cabin. The Dubai-based airline will begin its retrofit program to install the premium economy product on 67 Airbus A380s and 53 Boeing 777s in November. Emirates’ premium economy product includes a dedicated check-in counter in Dubai, 19.5-inch seats with up to 40 inches of legroom, in-seat charging, a 13.3-inch inflight entertainment (IFE) screen, improved bedding, amenity kits and a premium meal service. On Emirates’ four-class A380s, the 56-seat premium economy cabin is located at the front of the main deck, in a 2-4-2 configuration. On the 777, up to 24 premium economy seats will be installed in a dedicated cabin between business and economy. The new cabin class will initially be available on high-traffic A380 routes to London, Paris, Sydney starting Aug. 1, followed by Christchurch, New Zealand, in December. 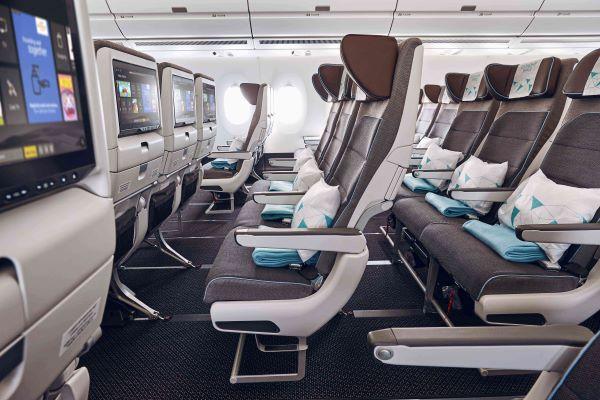 The Recaro Aircraft Seating CL3710 entered into service on March 31, 2022, when Etihad Airways’ new A350-1000 flew its maiden flight. Ideal for long-haul routes, the Recaro CL3710 economy class seat won a 2019 Crystal Cabin Award for its extensive comfort enhancements. The CL3710 seat features a 13.3-in high-definition screen with integrated USB charging ports and a personal electronic device holder. Etihad’s fixed-wing headrest has been incorporated into the economy class seat, which adapts to passengers of different heights and statures while maintaining optimal neck support. In addition, the lightweight seat design reduces fuel burn, which results in lower inflight carbon emissions. 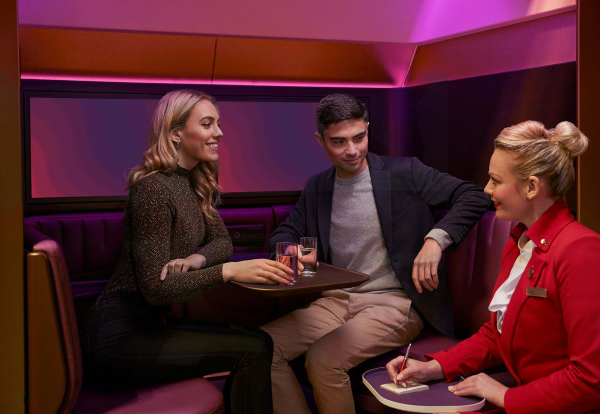 Virgin Atlantic has unveiled a series of new experiences exclusively available on its Airbus A350s, which have been designed specifically for passengers on leisure routes. Tucked away in the upper-class cabin, The Booth offers a number of experiences for two, including private dining, and wine and cognac tasting. Further experiences offered in The Booth include ‘Dinner for Two’ private dining for two and ‘Game Time,’ where guests can compete with their travel partner thanks to exclusive Virgin Atlantic playing cards. 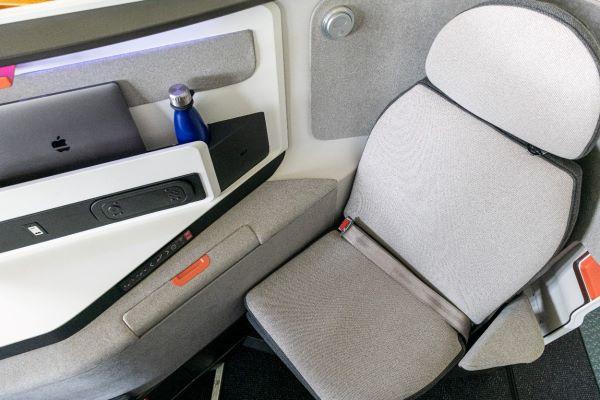 New entrant Unum Aircraft Seating—in collaboration with designer Acumen—revealed its first business-class seat, Unum One, which it said delivers “exceptional comfort with class-leading dimensions and a consistent passenger experience across single- and twin-aisle aircraft.” Unum One has been in development for over two years and the company said it offers an outward facing herringbone layout with full lie-flat bed and direct-aisle access. The seat will allow airlines to deliver a consistent business-class passenger experience across all aircraft fleets and can be deployed at a wide range of pitches to maximize efficiency in the cabin layout. For passengers, Unum One offers an infinitely adjustable range of seat positions, including the heightened comfort of a well-supported Zero Gravity position. Unum One delivers a 21” seat width and for single aisles an 80” bed length (78” for widebodies). 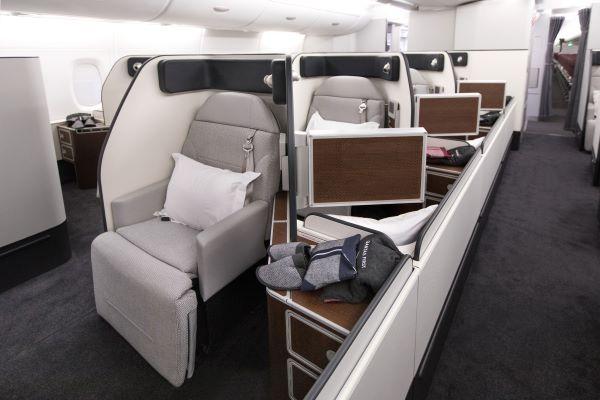 Qantas is set to reintroduce its first-class offering by the end of March 2022 and more of the Australian carrier’s A380s are put back in service. A fourth Qantas A380 has emerged from the Californian desert with Reginald Ansett (VH-OQH) leaving the storage yard this month for the first time since it was parked there in March 2020. Qantas utilized the down time while the aircraft were in the desert to upgrade the A380s increasing the number of premium seats and refurbishing the cabins. The aircraft have a reconfigured business class cabin, with 70 updated business suites, and an extended premium economy section with 60 seats, up from 35, as well as refreshed economy and First cabins. The upper deck lounge has also had a full upgrade with booth style seating for 10 people, a self-service bar and an option to order signature drinks and snacks. The Qantas A380 currently operates flights from Sydney to Los Angeles and from June will also operate flights between Sydney and London via Singapore. 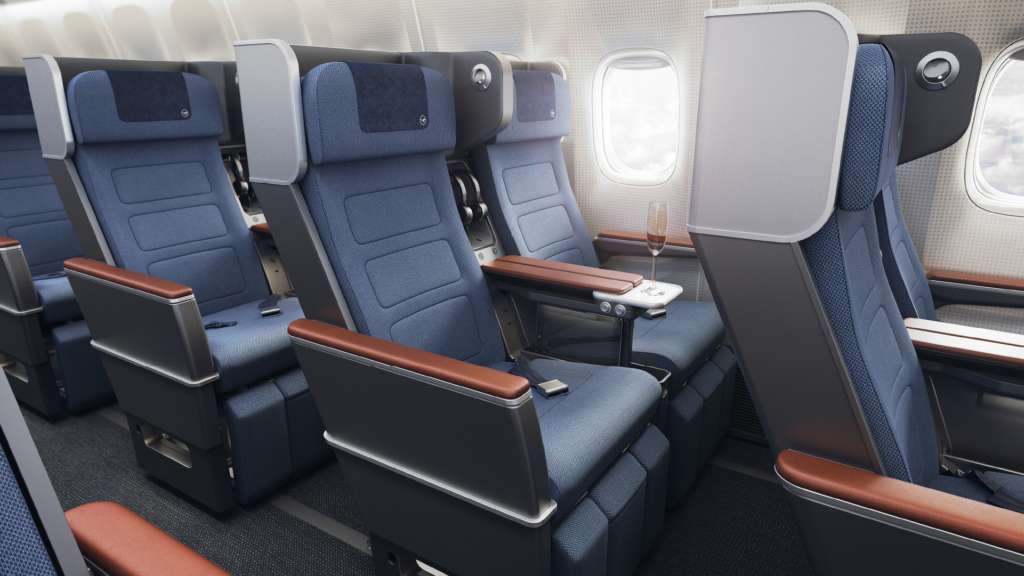 Lufthansa Group selected ZIMprivacy (PC-02) premium-economy seats from ZIM Aircraft Seating for 19 of Lufthansa’s Boeing 747-8s and nine SWISS Airbus A330s. The seats will be customized with specification and trim & finish variants for Lufthansa and SWISS to enable each airline to maintain their own cabin branding. In the 2022 first quarter, the ZIM PC-02 premium-economy seat will also be installed in SWISS A340s; in the future they will be installed on Lufthansa’s new A350s, 777-9s and 787s. 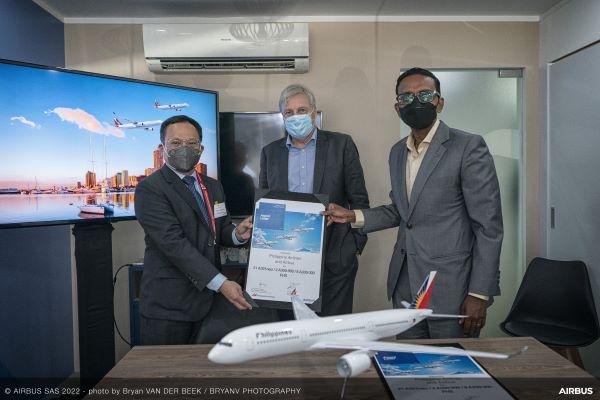 Philippine Airlines (PAL) selected Airbus to perform cabin modification for 15 aircraft and expand the material services program for the airline’s Airbus fleet. The cabin modification agreement covers 11 A320, two A330-300s and two A350-900s. When completed, PAL’s A320s will have 24 extra seats to bring the total seat count to 180, a configuration that suits the airline’s requirements for short-haul inter-island domestic routes. The two A330s will gain an additional 50 seats to bring the total seat count to 359 for better airlift capability on key higher-density regional routes and repatriation flights. The A350s will gain another 18 seats for a total of 313 seats. 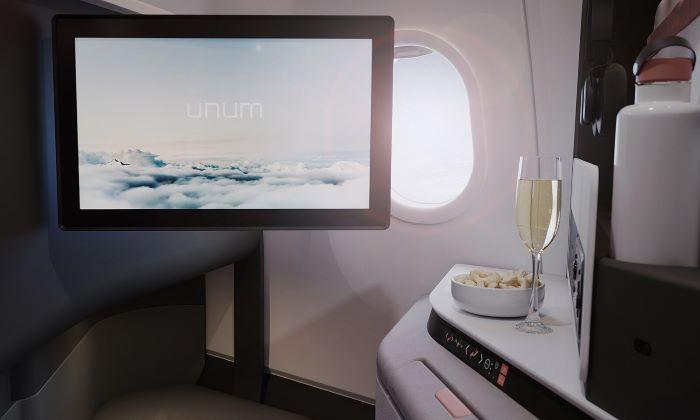 UK-based Unum Aircraft Seating—a new entrant to the business cabin seat market—plans to set up a production facility in southwest London later in 2022 and is launching to “solve airlines’ longstanding dissatisfaction with business-class seating supply,” said Unum executive chairman Chris Brady, the former CEO and co-founder of Acro Seating. Initial products will be two lie-flat business-class seats, Unum One and Unum OneHD (high density). The company intends that, within a given cabin seat density, its seats will be wider, longer and have more spacious side furniture than competitors, with customization options available to airlines that want to match their branding and cabin designs. Unum is working on the project with industrial designer Acumen. Factors that Unum hopes to incorporate in its products is ease of repair and eliminating potential problems at the design stage by looking to move away from the traditional phenolic resins used to manufacture parts of the seat structure to a new type of epoxy resin. 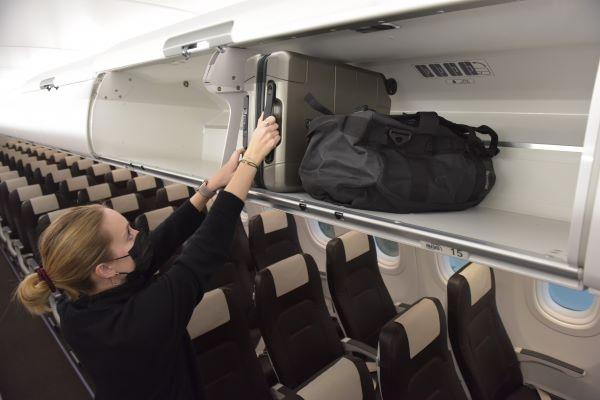 Swiss International Air Lines (SWISS) has taken delivery of its first Airbus A320neo featuring the new Airspace cabin on its short- and medium-haul routes. The new Airspace cabin features include: slimmer sidewall panels for extra personal space at shoulder level; better views through the windows with their redesigned bezels and completely integrated window shades; the largest overhead bins for 60% more bags; the latest full LED lighting technologies; LED-lit entrance area; and new lavatories with hygienic touchless features and antimicrobial surfaces. The first commercial flight of the A320neo with the new Airspace cabin is scheduled for the end of January 2022. SWISS has now taken delivery of five new A320neos and two new A321neos. The remaining 18 neos on order—12 A320neos and six A321neos—will join the SWISS fleet through 2025. 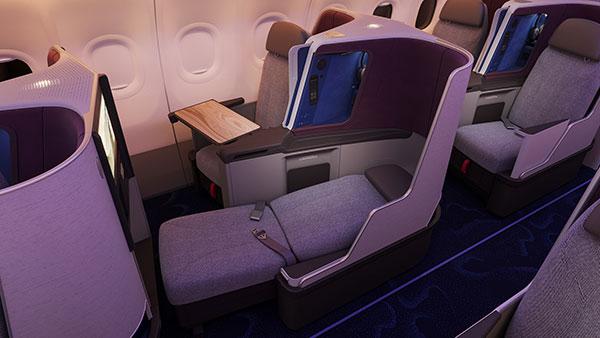 China Airlines’ new Airbus A321neo is configured with 180 seats, including 12 in Premium Business Class and 168 in Economy Class developed by STELIA Aerospace. The airline said the cabin configuration has been “fine-tuned to meet passenger requirements and support contactless service for epidemic prevention in the post-COVID-19 era.” Fully flat Premium Business Class seats developed for widebody passenger aircraft have also been introduced on a narrowbody passenger aircraft for the first time. Each seat is wider and equipped with adjustable extra-height partitions for privacy and reduced contact with neighboring seats. STELIA Aerospace also designed the full height front row monument specifically tailored for China Airlines, which optimizes storage space as well as the aircraft seat count. 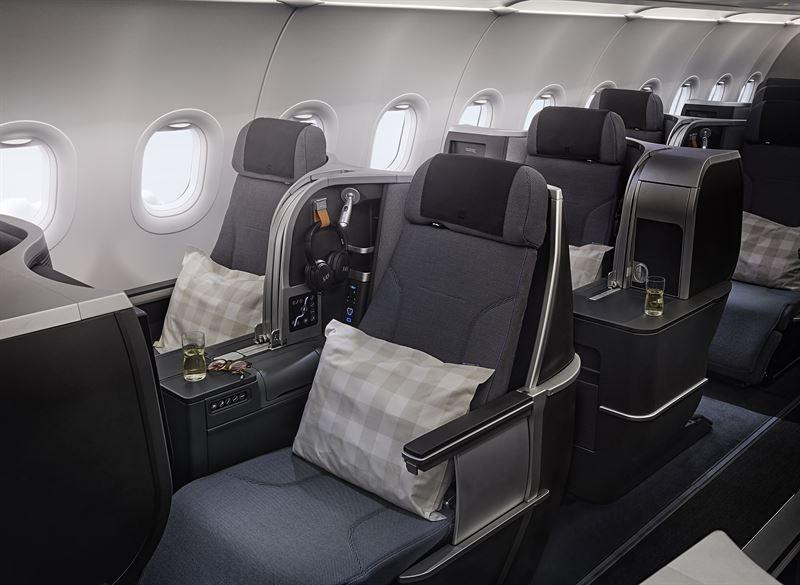 Scandinavian Airlines’ (SAS) new Airbus A321LR cabin (to enter service March 27, 2022) has 22 Business, 12 Plus and 123 Go, meaning a total of 157 seats in a single-aisle aircraft. SAS said the seats are “especially chosen for the A321LR to optimize the comfort in all three travel classes to meet the expectations of frequent travelers.” Seats in SAS Business are fully flat seat beds and there are different mood light scenarios in the cabins, as well as Hi-speed Wi-Fi. Every seat is equipped with IFE screens, PC-power and/or Hi-power USB. The reduced noise level inside the cabin will further enhance the travel experience onboard. The aircraft is expected to reduce climate-impacting emissions by around the same amount as when SAS introduced the A320neo, whose carbon footprint is approximately 15-18% smaller than an equivalent size aircraft from the previous generation. SAS has set a target of reducing CO2 emissions by 25% by 2030 through ongoing fleet renewal. 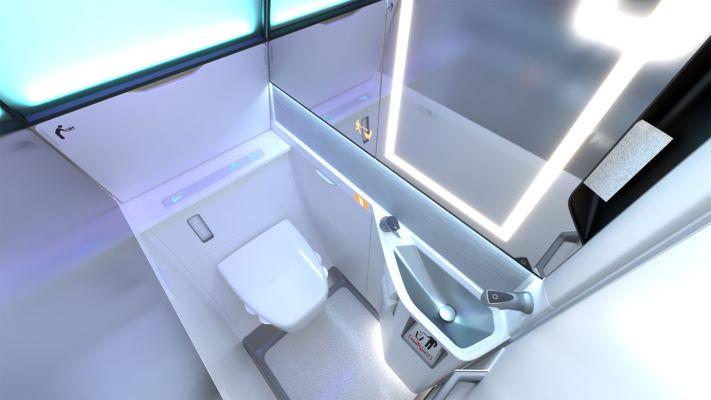 Boeing has selected Collins Aerospace to be the long-term provider of next-generation lavatories for the 737-family aircraft. The new lavatory incorporates a modular design and customization opportunities for trim, finish and lighting and includes touchless functionality, the latest micro-LED lighting technology and a centralized computing system to optimize the passenger experience, improve airline operability and help pave the way for future technology integration. 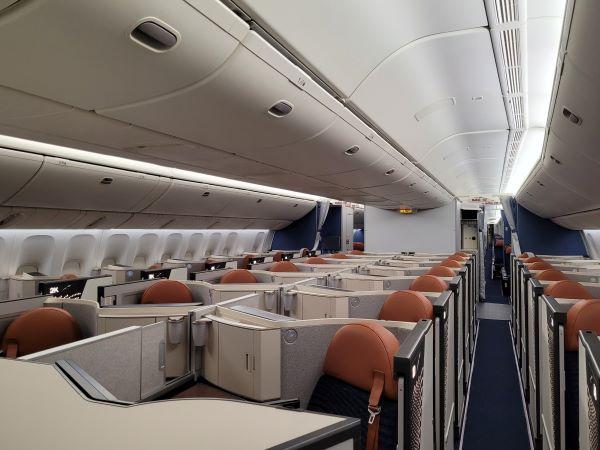 HAECO Hong Kong, a member of the HAECO Group, has completed cabin reconfiguration work on the first of Aeroflot-Russian Airlines’ Boeing 777-300ER aircraft. The new cabin interior will increase the aircraft’s capacity from 402 to 427 seats, including 28 business class seats, 24 comfort class seats, and 375 economy class seats. The seat pitch averages 80cm (32 in.) in economy class and 96cm in comfort class. Business class individual suites are equipped with a sliding door and an extra armrest, providing a high level of privacy. Each private suite is also fitted with an 18.5-in. HD monitor and a 6.5 ft. full-flat bed. 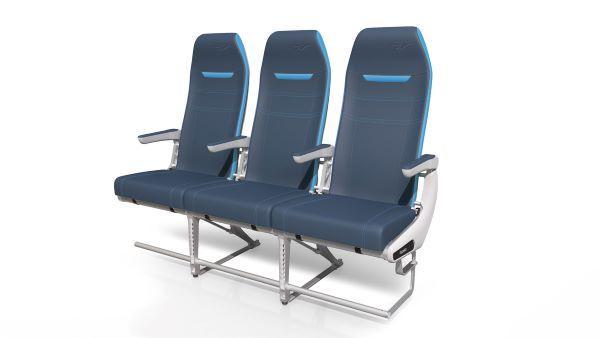 Recaro Aircraft Seating’s SL3710 economy seat is taking off on Cebu Pacific Air’s first A330neo. Through the end of 2025, a total of 16 A330neo aircraft will be delivered to the Philippines-based airline, with 459 pax of the SL3710 installed on each aircraft. 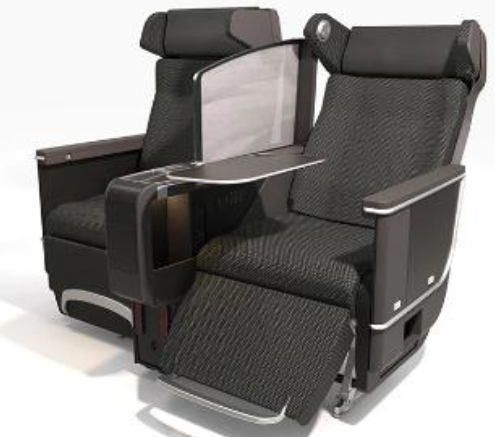 All Nippon Airways (ANA) revamped the seating on its Boeing 787-9 aircraft with enhanced Safran premium and economy seats, including personal screen monitors (expanded to 13.3 in. for economy class), for domestic passengers. In addition, the number of premium seats has increased from 18 to 28.

Cabin interiors designs are shifting focus to sustainability and well-being, in response to the new set of demands as airlines and passengers look at their seat in terms of how it addresses their health and environmental concerns, in addition to comfort.